For motorists without the coupons, there is nothing left to do but scour cities looking for the very few service stations that will take money. 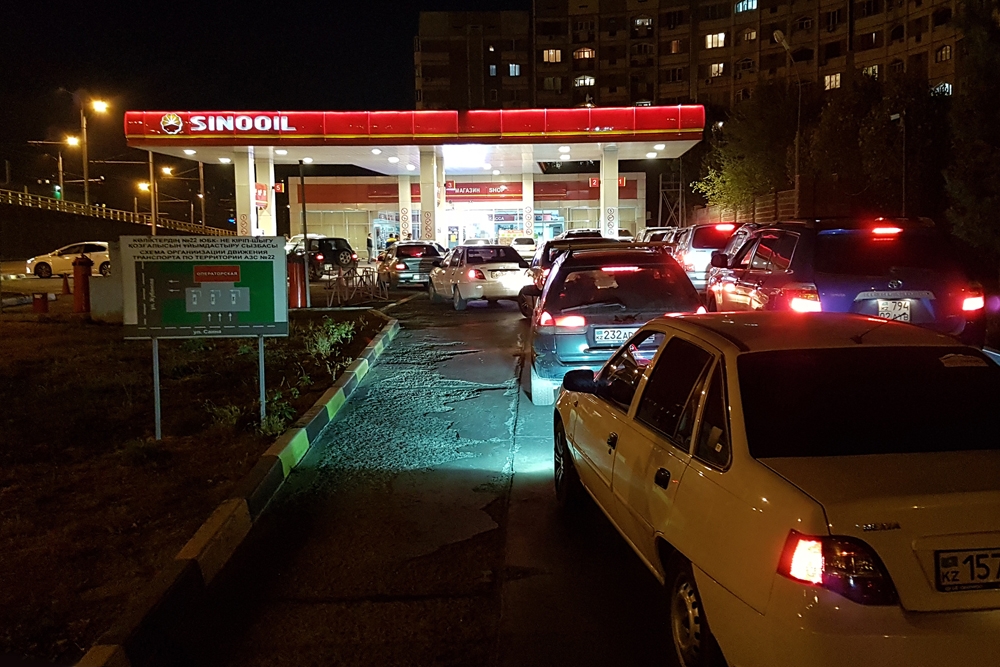 A line at a gas station in Almaty late on October 10. Kazakhstan, a nation rich in hydrocarbons, is grappling with a gasoline shortage that has enveloped the entire country, including the capital, Astana, and the southern metropolis of Almaty. (Photo: EurasiaNet.org)

Kazakhstan, a nation rich in hydrocarbons, is grappling with a gasoline shortage that has enveloped the entire country, including the capital, Astana, and the southern metropolis of Almaty.

Portents of a shortage appeared in late September, when Kazakhstani media outlets began reporting that service stations in the north and east of the country were experiencing trouble supplying customers with gas. Authorities acted swiftly to tamp down concerns, assuring motorists that there was no fuel crisis in the offing. Speaking at a news conference on September 22, a deputy energy minister, Mazgum Mirzagaliyev, downplayed speculation that a gas crunch was looming, asserting that fuel shortages only affected select retailers. The problem would blow over in a matter of days, he pledged.

But it has not turned out way. These days, many service stations are providing fuel only in exchange for coupons. These little slips of paper, which can be exchanged for set amounts of gas — 10, 20 or 30 liters — are distributed to employees of certain companies that bulk-buy the coupons in advance as a form of insurance against seasonal price spikes.

For motorists without the coupons, there is nothing left to do but scour cities looking for the very few service stations that will take money. To make matters worse, gas retailers appear to be exploiting the moment by hiking prices by around one-tenth. Some service station chains in western regions of the country reportedly raised prices by around 35 percent, but were forced to backtrack by state regulators.

Despite the soaring costs of fuel, kilometer-long lines at gas stations have become a common sight and have, in a knock-on effect, brought traffic to a standstill in parts of several cities. Motorists have taken to social media and messaging apps en masse to exchange real-time information about gas availability.

Mirlan Telebarisov, a 38-year old resident of Almaty, visited several districts of the city in his car before finally finding a gas station in the suburbs that would sell to him. It was the middle of the night before he finally got home, he told EurasiaNet.org.

Telebarisov said that the fuel he bought will only tide him over for a few days since his daily commute takes him to his child’s kindergarten and across the whole city through traffic jams. “The city is going through a fuel apocalypse! How did we get to this point? We are an oil country with a fuel deficit! Who is responsible? Why don’t the people who brought us to this point just resign?” Telebarisov told a EurasiaNet.org correspondent, unable to contain his anger.

Similar expressions of rage can be heard at gas stations all across the country, on social media and in commentary pieces on online publications. Some Facebook users have even broken the unspoken taboo of questioning the competence of President Nursultan Nazarbayev, and in highly abusive terms at that.

The Energy Ministry has linked the deficit with scheduled repair works at two of the country’s three oil refineries — one is in the western city of Atyrau and the other is in the north, in Pavlodar. That reduction in supply was compounded by a sudden interruption in supplies of Russian fuel, which accounts for 40 percent of Kazakhstan’s needs.

A high-ranking member of parliament with the ruling Nur Otan party, Maulen Ashimbayev, scoffed at these explanations. He accused unnamed parties of trying to make a quick profit out of the crisis. Ashimbayev said the government needed to take immediate action to address the issue, otherwise MPs would tackle it, although he did not quite specify what he meant by this.

Political analyst Ruslan Zhangazy shared the MP’s assessment, telling EurasiaNet.org that there were intermediaries on Kazakhstan’s fuel market who were hoarding gas and closely controlling deliveries and prices. Zhangazy said that the middlemen are, as a rule, closely connected to local officials.

The response from the highest levels of government has been notably slow. On October 10, Prime Minister Bakytzhan Sagintayev demanded a full accounting of the situation from Energy Minister Kanat Bozumbayev, who continued to insist that all was normal and that it was improper to speak of a deficit. Bozumbayev then pinned the blame for the shortages on “speculators from neighboring countries who are buying fuel in large amounts,” and on owners of gas station companies that had failed to bring in enough supplies from Russia.

The bosses were unimpressed by the explanation. Nazarbayev issued Bozumbayev a formal reprimand — a warning only the president has the authority to give. Sagintayev then fired a deputy energy minister, Aset Magauov, and the deputy president of KazMunaiGaz, the national oil and gas company, Daniyar Berlibayev, whose portfolio includes the domestic fuel market.

Following these high-profile personnel changes, the head of KazMunaiGaz, Sauat Mynbayev, held a news conference to reveal yet another piece of the deficit puzzle. As Mynbayev explained, while high-grade gas is selling in Russia at the equivalent of $0.65 per liter, the guidance price set by Kazakhstan’s antimonopoly agency, from which retailers stray at their peril, stands at $0.44 per liter. The rules of the market make it bad business to export Russian fuel to Kazakhstan. The decisive role is being played here by the Committee for the Regulation of Natural Monopolies, Mynbayev hinted.

The Energy Ministry has in recent days hammered out a compromise deal with the anti-monopoly committee to take into account the discrepancy of prices with Russia, which officials say should lead to the reappearance of imported fuel by October 15.

Motorists are now anticipating a fuel deficit crisis to be superseded by a rapid escalation in prices.

Kazakhstan saw a similar gas crisis in the summer of 2014. On that occasion too, officials deflected the blame onto Russian suppliers. In October that year, Energy Ministry representative Nurbek Amangeldyuly assured an interviewer that once the country’s refineries had been modernized, no such events would be repeated. Three years later, however, little seems to have changed.