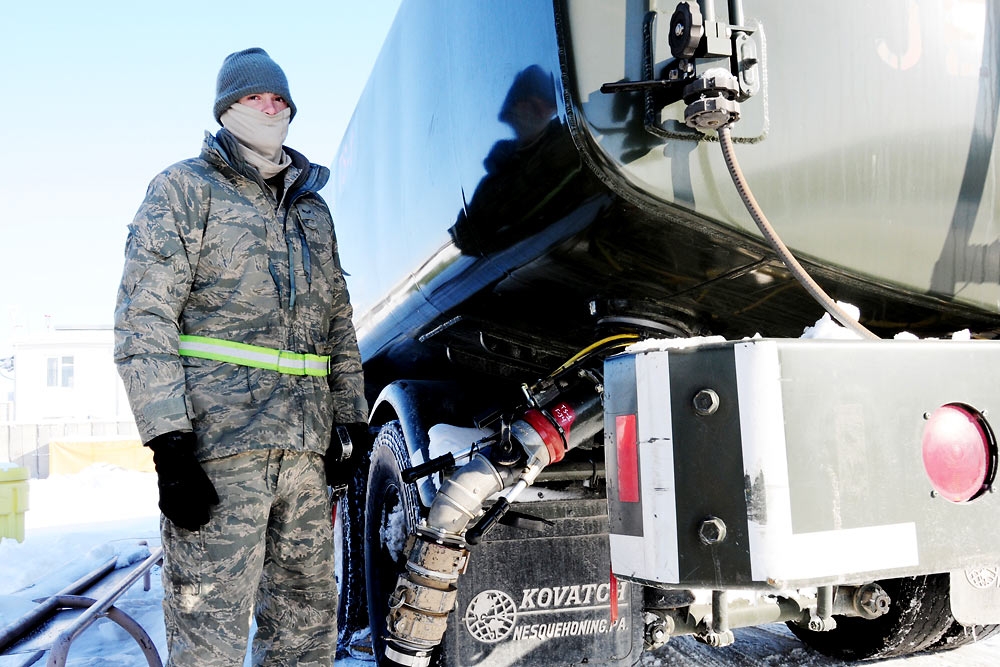 The owner of a strategically important fuel storage depot in Kyrgyzstan claims he came under pressure to sell it after refusing to rent the facility to Red Star Enterprises Ltd.

Red Star and its affiliate, Mina Corp, are the previous and current holders of lucrative fuel-supply contracts at the Manas Transit Center, near the Kyrgyz capital Bishkek. Both entities are currently the subject of a US congressional investigation into contracting practices at Manas, which is a key logistical hub for the US and NATO war effort in Afghanistan. [For background see EurasiaNet’s archive].

Valeriy Khon, the head of the VOSST company and the owner of a fuel storage depot near the Manas facility, asserts that he received a letter in July of 2006 from Chuck Squires, a former US defense attaché in Bishkek who went on to become a military procurement impresario. Signing the letter in the capacity of Red Star’s director of operations, Squires sought to rent Khon’s depot. Khon made a copy of the letter available to EurasiaNet.org.

“Chuck Squires approached me first time in 2003. He wanted to buy the fuel depot from me. But I refused to sell it because it is a strategic object and also because I am a religious man and I didn’t want to have any business with the military,” Khon told EurasiaNet.org on May 27.

Squires did not take “no” for an answer, Khon added. In the 2006 letter, dated July 19, Squires proposed not only renting Khon’s existing storage facility, but also setting up a joint company with Khon that would build and operate a new depot with a capacity of 18,000 cubic meters (tcm). Khon rebuffed both ideas.

In July 2008, Squires again approached Khon, seeking to rent the fuel storage depot, which has a capacity of 14.7 tcm for jet fuel. Khon for a third time refused to deal with Squires. But within days of this last refusal, Khon alleged that associates of Maxim Bakiyev, the son of ousted president Kurmanbek Bakiyev, began calling him.

Khon asserted that Squires offered relatively generous terms to gain control of the storage facility, including a year’s payment in advance. But the Kyrgyz entrepreneur insisted he could not do a deal with Red Star in 2008 because of prior agreements.

Mina Corp has held the contract to supply jet fuel to Manas air base since 2007. At the time Squires is alleged to have approached Khon in 2008, his storage facility could have accounted for two-thirds of the required capacity to meet Mina Corp’s contractual obligation to maintain a reserve of approximately 6 million US gallons of jet fuel.

“I couldn’t rent the fuel [storage depot] to them because I had already signed contracts with other companies here. And I couldn’t break it, although he was offering a very good amount of money,” Khon explained.

“Maxim’s people started really pressuring me after that to sell them the fuel [storage depot],” Khon continued. “They needed the fuel [storage depot] because it is the closest to Bishkek and very close to [Manas] air base. Also, [Manas] has [capacity for] about 8 tcm, and my fuel depot has about 14.7 tcm.” [For background see EurasiaNet’s archive].
Despite the pressure, Khon managed to retained ownership of the facility.

Among those who purportedly called Khon about the depot was Omurbek Babanov, a former member of Social Democratic Party who was appointed first deputy prime minister of Kyrgyzstan in January 2009. He resigned from the post just nine months later, saying he wanted to concentrate on his business interests.

Red Star/Mina Corp have repeatedly denied any improper links with the Bakiyev family. Representatives of the two firms have portrayed Babanov as a competitor who was interested in gaining control of fuel-supply contracts for himself. The Kyrgyz government is conducting its own investigation into the allegedly corrupt dealings of several Kyrgyz fuel-supply entities purportedly controlled by Maxim Bakiyev. [For background see EurasiaNet’s archive].

In 2007, Red Star started building a fuel storage depot and pipeline that serviced Bagram, the chief US air facility in Afghanistan. Competitors maintain this effectively ensured that Red Star would retain exclusive rights to any future fuel contracts for the base.

According to a memorandum of understanding between the Pentagon and Red Star, the company was to build the fuel depot and pipeline at no cost to the US government. In return, Red Star would retain ownership of the facility. The deal raised hackles among Red Star competitors who described it as “non-competitive.”

The depot and pipeline may have given Red Star a competitive advantage. A pre-solicitation for a “sole source” award for jet fuel deliveries to Bagram issued on February 8, 2008 specified that fuel was “to be delivered by pipeline ([Free On Board] Destination) from Red Star Enterprises Limited’s facility to Bagram Air Base, Afghanistan.”

A modification to the pre-solicitation on February 15, 2008 added: “[The Defense Energy Support Center (DESC)] invites expressions of interest from other potential [suppliers]. Any firms desiring consideration must fully identify, in writing, their capabilities to deliver TS-1 [jet fuel] by pipeline into Bagram AFB.”

But by the time the solicitation was posted on March 17, 2008, DESC had reverted to a “sole source” award because Red Star reportedly refused to allow any other competitors to use its fuel storage facilities, correspondence between lawyers for International Oil Trading Co., a Red Star competitor, and DESC alleges.

Ultimately, Red Star won the Bagram supply contract with a “base and all options value” of $720.6 million on August 1, 2008. In line with the contracting requirement that the jet fuel be sourced in Eurasia, the US government’s Federal Procurement Data System states the fuel comes from Turkmenistan. On August 15, 2008 the contract’s “base and all options value” was increased to $1.2 billion to include what was described only as “additional work.”