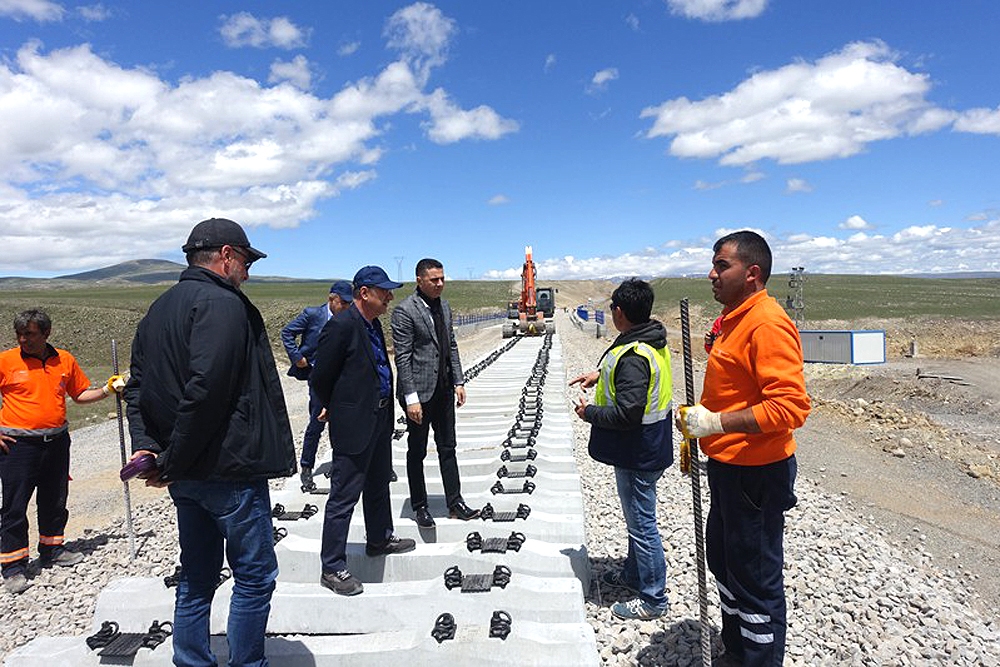 Turkish officials inspect construction works on the Turkish section of the Baku-Tbilisi-Kars railway in mid-2017. The railway officially opened on October 30. (Photo: Turkey’s Ministry of Transport, Maritime Affairs and Communications)

The launch of a new railway in the South Caucasus has the potential to attract foreign investment and boost trade, as well as encourage political cooperation in a region fraught with conflict. But can the railway deliver as envisioned?

After years of delays, the Baku-Tbilisi-Kars (BTK) railway officially opened October 30, connecting the Caspian Basin to eastern Turkey, with onward access to the European rail system.

The heads of state of Turkey, Azerbaijan and Georgia, along with the prime ministers of Kazakhstan and Uzbekistan, attended opening ceremonies held outside of Baku, at the route’s eastern terminus. Azerbaijani President Ilham Aliyev said the railway’s completion was the result of the “brotherhood” of the three countries. Turkish President Recep Tayyip Erdoğan described the BTK as a “new Silk Road venture initiated to connect Asia, Europe and Africa.”

Boosters say that the South Caucasus sits at the crossroads of vibrant global markets: Central Asia and China are to the east, Turkey and Europe are to the west, Russia is to the north, and Iran and the Middle East are to the south. The BTK will enable goods to be transported across the Eurasian landmass in just 15 days – twice as fast as sea routes, and at half the cost of air.

The BTK has been over two decades in the making. Initial planning for the railway was an outgrowth of the war between Azerbaijan and Armenia over Nagorno-Karabakh. In 1993, Turkey, as a gesture of support for Azerbaijan, closed its border with Armenia. That cut what was at that time the only rail link between Turkey and the Caucasus, from Kars to Gyumri, Armenia.

The BTK remained in a state of limbo for a decade. Then, in 2007, the heads of state of Azerbaijan, Georgia, and Turkey signed an agreement to build the railway, with a target completion date of October, 2010.

Georgia’s brief war with Russia in 2008 knocked the project back. With Tbilisi’s economy in ruins, many doubted the BTK would ever be realized. In February 2016, though, a fifth and final trilateral meeting agreed on a 2017 completion date.

“There is a fairly strong consensus in favor of the project” said Ghia Nodia, a political analyst at Ilia State University. “It’s part of a general effort to turn Georgia into an indispensable ‘transit country,’ so that different powers (the West, Turkey, and now China) have a stake in its security and stability.”

The BTK route aims to be integral to China’s Belt and Road initiative – an almost $1 trillion infrastructure development plan to enhance land, sea, and air networks linking European markets with those in the Far East. Georgia, and neighboring Azerbaijan, would form a strategic transit corridor, with regional governments expecting the BTK to transport up to 17 million tons of cargo and over 3 million passengers annually by 2030.

One of the biggest drivers of the BTK is Russia’s growing isolation since 2014. Following its annexation of Crimea, Russia was placed under an international trade embargo. In response, Russia has blocked food imports and transit from countries supporting sanctions, which includes European products en route to Asian markets.

The BTK now offers a route that allows products from Europe to bypass Russia: cargo can pass through Turkey and on to port facilities on Azerbaijan’s Caspian Sea coast. From there, goods can be ferried across the sea to Kazakhstan, and then onward to China.

While demand for the railway has been high, funding was difficult to come by. Many multilateral organizations, including the World Bank, European Union, and the European Bank for Reconstruction and Development, refused to fund the project, in large part because the railway bypasses Armenia. The EU, in particular, has been working to reopen the old route between Turkey and Armenia.

Although Azerbaijan and Turkey were able to fund their sections, Georgia was not, especially after its economically disastrous war with Russia.

Azerbaijan stepped in, however. Baku’s State Oil Fund (SOFAZ) offered Georgia a virtually interest-free loan. The first loan, disbursed in 2007 was for roughly $200 million at 1 percent interest. The money was supposed to cover nearly all of the costs of constructing Georgia’s 178-kilometer section of the railway. But costs ballooned and later SOFAZ offered another loan of about $600 million at 5 percent interest.

Azerbaijan believes the railway is worth the investment. “For Azerbaijan, the BTK will transform the country into a regional transportation hub,” says Mahir Humbatov, a researcher who has co-authored two books on the railway. Humbatov maintains the railway’s transit trade can generate about 300-400 million AZN [177-237 million USD] in annual revenue for Baku.

Beside providing additional revenue via transit fees, the railway is also expected to stimulate local manufacturing. A series of manufacturing centers have been built to take advantage of the new transportation options. Azerbaijan’s 20-square-kilometer New Port of Baku at Alyat, for example, now has a free trade zone aimed at stimulating the country’s petrochemical processing industry, in particular plastics. Turkey established two free trade zones around Kars, its eastern logistics hub. And Georgia, too, has been setting up a network of free industrial zones along its section of the route.

Georgian economists believe the new railway can encourage lower trade costs. “It would be great to have more competition among the different transportation modalities and transport companies,” said Eric Livny, Director of the International School of Economics (ISET) at Tbilisi State University. “The result will be lower transport tariffs, better service, and higher volumes of transit cargo.”

Ultimately, cost competitiveness could help Georgia attract transit trade from other regions, such as Russia and Central Europe. If that happens, it could provide a boost for Poti, Georgia’s main Black Sea port, which is currently operating at about half its capacity. “If prices go down and volumes increase – larger ships will sail there, reducing prices on the Black Sea section of the transport route,” Livny said.

Bradley Jardine is a journalist based in Moscow covering the post-Soviet region and China.