The new law should make it more difficult for the ruling party to hold on to the disproportionate power it now enjoys. 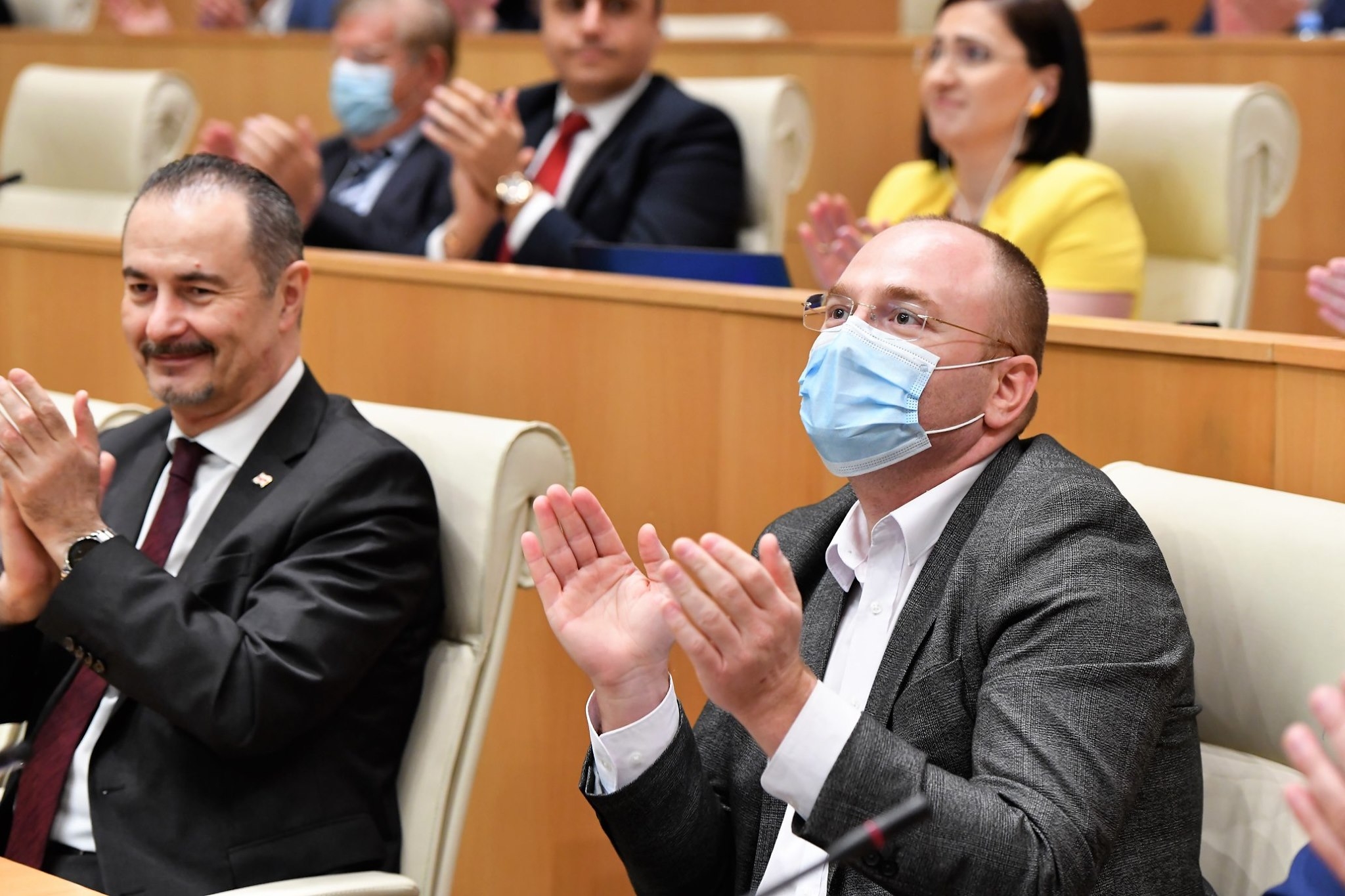 Members of Georgia's parliament applaud following the final approval of an electoral reform that should reduce the power of a single party. (photo: parliament.ge)

Georgia’s parliament has passed a long-contested electoral reform aimed at ending the excessive consolidation of power by a single political group.

Applause rolled through the parliamentary chamber on June 29 following the final vote approving the much fought-for change. Speaker of parliament Archil Talakvadze even adopted a colloquial register: “This is totally awesome, congratulations everyone!” Talakvadze, from the ruling Georgian Dream party, described the move as testimony to Georgia’s commitment to democratic progress.

Opposition parties dismissed the self-congratulations, arguing that the ruling party had to be cajoled into making the concession. “Georgian Dream was forced to agree to this change under the pressure from the public and our international partners,” said Irakli Abesadze, an MP from the European Georgia party.

Critics have long maintained that a problematic law governing elections helped Georgian Dream amass a supermajority in parliament in the last vote, in 2016, in which it secured a number of seats far out of proportion with the party’s vote total.

The new law brings the distribution of parliamentary seats more into line with the national vote results, as well as introducing a mechanism to help prevent any one party from gaining enough power to rewrite the constitution single-handedly.

Western diplomats, who worked arduously to get the ruling party and opposition to compromise on the reform, welcomed the adoption of the amendments. “We warmly congratulate the Parliament of Georgia on today’s adoption of Constitutional amendments designed to increase parliamentary pluralism and allow for a more representative legislature,” U.S. and European diplomats said in a joint statement.

The new law, which will be in effect for this fall’s pivotal parliamentary elections, gives a larger weight to the proportional component of Georgia’s mixed electoral system. In this fall’s elections, 120 of 150 parliamentary seats will be assigned to parties proportionally to national support. The remaining to 30 seats will go to individual candidates nominated by their parties to run in district races.

Previously, there was a nearly 50-50 split between proportional and majoritarian seats, or between national races among parties and district races among individual candidates.

Additionally, the new law puts in place a capping mechanism to prevent overrepresentation and a correspondingly disproportionate concentration of power. Now, no party with less than 40 percent national support will be able to claim a parliamentary majority sufficient to form a government unilaterally. Additionally, the threshold for a party to make it into parliament has been reduced to just 1 percent, opening the door to more minor groups.

The compromise reform has been more than a year in the making.

Georgian Dream originally promised to fully switch to a proportional system in order to tamp down a series of protests that erupted following the violent crackdown on a demonstration last June. The party later reneged on the promise, sparking a fresh bout of protests, and eventually agreed to a compromise version of the change this March.

The most significant opposition groups refused to take part in the June 29 vote, accusing the governing party of failing to fully implement the deal on election reform that the foreign diplomats brokered on March 8.

The opposition parties insisted that the ruling party failed to comply with all components of the March 8 agreement, in particular the release of several jailed political rivals. Releasing these figures appeared to be an informal part of the deal; most of them have already been released.