Vakhtang (Buba) Kikabidze, a Georgian singer and actor universally loved across the former Soviet Union, has died at the age of 84, drawing the curtain on an era. 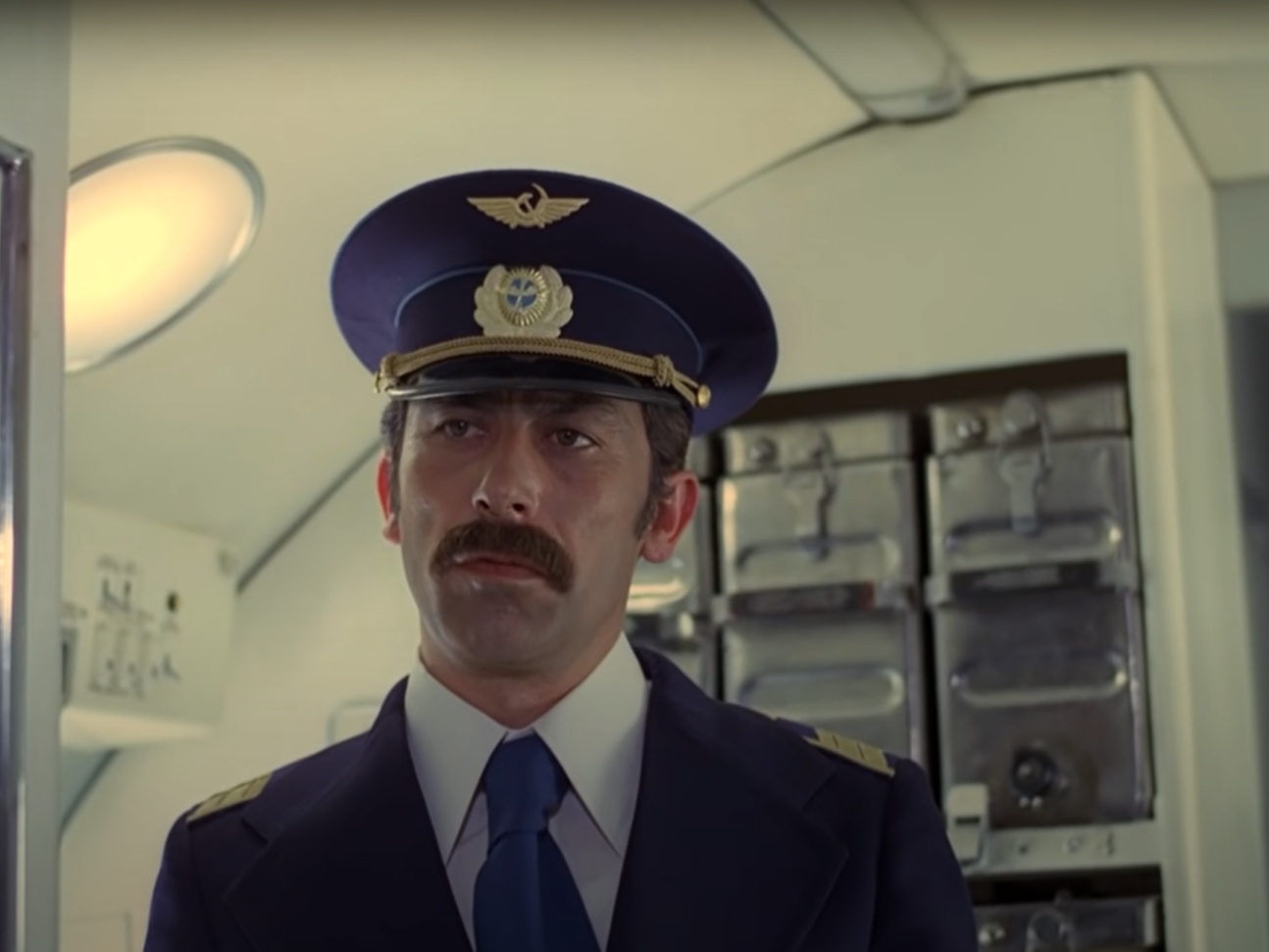 In the late 1970s a mustachioed pilot with a kindly, gap-toothed smile and a velvety baritone sent hearts aflutter across the USSR. A small-town Georgian who came to Russia with a dream to fly big planes, the pilot was the titular protagonist in the bittersweet comedy film “Mimino” (Georgian for sparrow hawk).

Georgian singer and actor Vakhtang (Buba) Kikabidze played the role of Mimino. Naïve, proud, talented and roguishly handsome, he grew to personify Georgia in the eyes of Soviet viewers.

From Russia, to Ukraine, to Kazakhstan, everyone went humming “Chito-Gvrito,” the movie’s theme song, performed by Kikabidze. The song remains a karaoke mainstay to this day. “Mimino” itself now tops the must-see list for anyone looking to understand Soviet history and culture. The snappy one-liners from the movie are still quoted across the post-Soviet world.

There is hardly a place in that world today where they don’t shed a tear for Kikabidze, who died in Tbilisi on January 15 at the age of 84. Even leaders who are at war with one another – from Ukraine’s Volodymyr Zelensky to Belarus’ Alexander Lukashenko, from Armenia’s Nikol Pashinyan to Azerbaijan’s Ilham Aliyev – took a moment to express their condolences.

A man of protean talent and personality, Kikabidze embodied multiculturalism, but was a Georgian to his bones at the same time, known to everyone back home by his Georgian diminutive, Buba.

While “Mimino” turned him into a universally loved figure and a constant presence on the pop music stage in Russia and its vicinity, Kikabidze’s legend began in Georgia and with jazz.

In the 1960s a jazz band Orera gained massive popularity in Georgia. Created at the Institute of Foreign Languages in Tbilisi, the boy band both reinvented Georgian folk classics, and also brought American jazz standards and Latin rhythms to audiences in Georgia and in its brotherly Soviet republics, to use the lingo of that era.

Seen as an exotic, mischievous nook of the USSR, Georgia was allowed certain eccentricities then, including obsession with “decadent” Western music. Orera in fact became the first Soviet musical collective that combined Western jazz and traditional folk to travel beyond the borders of the Warsaw Pact and perform in the capitalist nations.

Georgia’s infatuation with jazz began with the Hollywood classic “Sun Valley Serenade,” a dubbed version of which hit Soviet theatres in 1961 and sent all of Tbilisi whistling the Chattanooga Choo Choo tune. “My generation grew up on jazz,” Kikabidze reminisced in an interview. He joined Orera in the mid-1960s as a young but already accomplished singer.

Kikabidze’s initial role on stage was to jam away on the drums, fool around on stage, and launch into zesty vocal improvisations to bossa nova and cha-cha-cha rhythms. The band also offered traditional Georgian polyphony with its complex harmonies and urban folk songs.

Within Georgia, Kikabidze earned on-screen renown with the role of coachman Pavle, a widowed father of two girls, in Giorgi Shengelaia’s 1973 “Melodies of the Vera Quarter.” The impoverished Pavle’s mournful song, the “Wheel of Fate Keeps Spinning,” is still a local favorite. Set in the late 19th century, it was the first Georgian musical film, a Georgian take on classics like “My Fair Lady.”

While the musical is considered primarily a Georgian classic, “Don’t Grieve” catered to a wider audience. It was Georgian-born Danelia’s first major attempt to introduce his native culture to nationwide viewers – a mission he later accomplished with “Mimino.”

Armenian movie star Frunzik Mkrtchyan, who made an unforgettable cameo appearance in “Don’t Grieve,” returned as Kikabidze’s sidekick in “Mimino.” The duet of Georgian pilot and Armenian truck driver became the epitome of both friendship and cultural competition between Armenia and Georgia.

“Back home in Dilijan, you turn an ordinary tap in the kitchen and what comes out is the second-best water in the world,” goes the driver, adding that only California has better water than Armenia. “What about Borjomi?” responds Kikabidze’s miffed character, referring to Georgia’s famed mineral water. “Think before you say things like that.”

Although the movie was not without its jabs at the system, “Mimino” helped the Soviet Union put a nice, multicultural face before an international audience. Based on the rough cut only, cultural authorities picked the movie for a showing at an international movie festival in Moscow in 1977. It was much later that Danelia described his struggles with Soviet censors, who mercilessly cut ideologically questionable moments from the film.

Danelia fought hard to save the scene where Mimino tries to call his hometown of Telavi in Georgia and the operator mistakenly places a call to Tel-Aviv. By coincidence, a Georgian Jew and recent émigré to Israel picks up the phone. Excited to hear his native tongue, the man begs the pilot not to hang up and asks him for updates from Georgia. The two end up tearfully singing an old Georgian song.

An angry Danelia later stole the sanitized, festival version and buried it in the yard of his house. “I patted the soil with my feet, threw some dry, yellow leaves on top and spit on it,” Danelia reminisced in his 2019 memoir, “Nightmare on Tiptoes.”

Kikabidze remained a welcome presence in Russia long after the Soviet empire’s demise, up until the Russian invasion of Georgia in 2008. Afterwards he refused to perform in or even visit Russia, and became an outspoken critic of Russian President Vladimir Putin. He then forayed into his homeland’s politics, siding with ex-President Mikheil Saakashvili in Georgia’s fierce domestic political struggles.

Most recently, Kikabidze emerged as a big supporter of Ukraine in its fight against Russian invasion and donated proceeds from his 84th jubilee concert to the victims of war in Ukraine. He however did not denounce Russians as a nation. “I love Russians, not least because they truly understand music,” he told Dozhd TV last May. “I always separate the Russian people from the Kremlin.”

Putin is the one post-Soviet leader who responded to Kikabidze’s death with conspicuous silence.

Before passing away in 2019 in Moscow, Danelia called Kikabidze and the two ageing Georgians agreed that soon they would have a supra – a traditional Georgian feast – in the heavens and invite all of their deceased friends. They would probably be joined at that party by another famous Georgian, who also indelibly etched himself into memory of Russians and their neighbors: bard Bulat Okudzhava.

About a decade ago, Kikabidze released a video with his rendition of Okudzhava’s “Georgian Song.” The lyrics could serve as an epitaph of Kikabidze’s life, a path filled with music, festivities and love:

“I will plant a grape seed in the warm earth. I will kiss the vine and pick ripe grapes. I will invite guests and let my heart fill with love. Is this not the whole reason I live on this earth?”