Georgia and the stolen Orthodox Christmas

Smaller Orthodox churches, like Georgia’s, are being forced to pick sides between Russia and Ukraine. 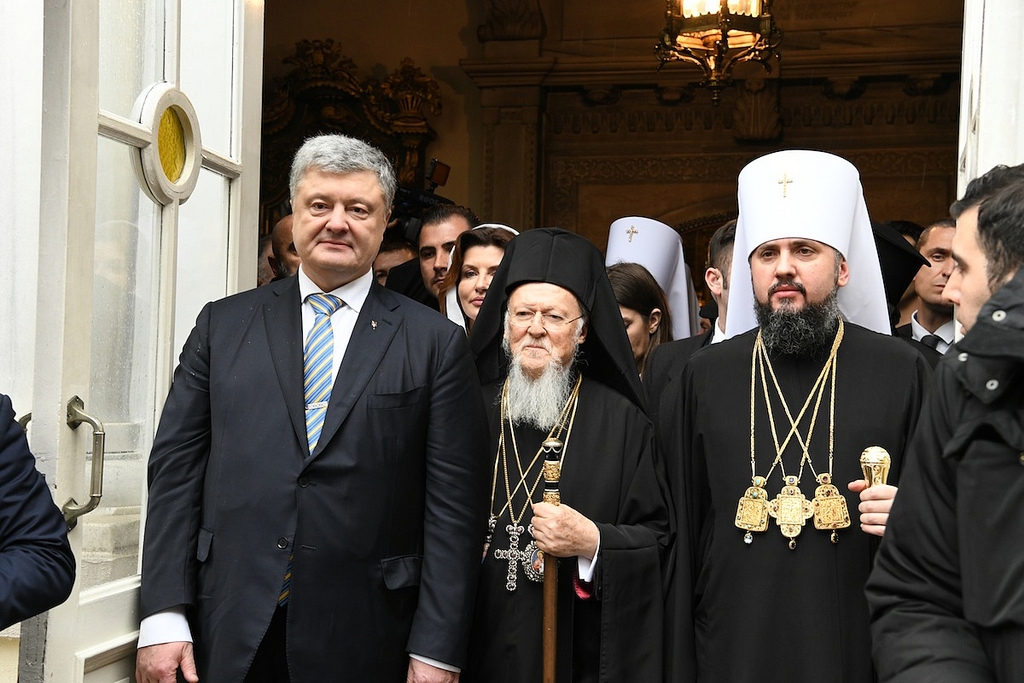 Ukrainian President Petro Poroshenko and Patriarch of Constantinople Bartholomew I at a Kyiv ceremony marking the formal granting of autonomy to the Ukrainian Orthodox Church. (photo: patriarchate.org)

This year’s holiday season had a distinct lack of the Christmas spirit in the Orthodox world, as the eastern church was riven by a momentous split between the Ukrainian and Russian churches. The schism is forcing smaller churches in the Eastern Orthodox club to pick a side and the Georgians are in perhaps the most delicate position.

The rift, which was announced last year, was finalized this week when the Istanbul-based Ecumenical Patriarch of Constantinople Bartholomew I, the formal supreme pontiff of Orthodox Christendom, formalized the granting of independence to Ukraine’s newly united church.

Bartholomew’s edict, formally known as a “tomos,” arrived in Kyiv on Christmas Eve, January 6, and was greeted with a national celebration. Moscow responded with condemnations; Russian church authorities described it as a useless “piece of paper” and even compared Bartholomew to the Christmas-stealing Grinch. “No matter how hard some Ukrainian politicians are trying to steal Christmas from the millions of believers in Ukraine with the help of the Istanbul Patriarch, Christmas will still come,” said Vladimir Logoyda, spokesperson for the Russian Orthodox Church.

Previously, the Ecumenical Patriarchate, the heart of global Eastern Orthodoxy, regarded the Ukrainian church as an ecclesiastical subject of the Russian Church. Two other Orthodox congregations in Ukraine were considered schismatic. The three Ukrainian congregations have now merged into one and the unified church has been declared independent or, in Orthodox terms, autocephalous.

The Russian Church severed ties with the Ecumenical Patriarchate last year when it became clear that independence for the Ukrainian church was in the cards. Other Orthodox churches, from the Balkans to the Caucasus, now face a choice of accepting or ignoring the new Ukrainian church as their equal, with their decisions bound to antagonize either Kyiv or Moscow. These decisions also will have ramifications for the unity of the Eastern Orthodox universe, with Constantinople Patriarchate as its center.

Although the Constantinople Patriarchate claims the right to grant full independence to aspiring Orthodox churches, its decrees are not necessarily law for the rest of Eastern Orthodoxy the way a papal bull is for the global Catholic church. The world’s 14 autocephalous Eastern Orthodox churches maintain full administrative autonomy domestically and only choose to defer to the Constantinople Patriarchate on international Orthodox matters.

As often has been the case in the Orthodox world, the church decisions are likely to coincide with geopolitical fault lines. The church in Serbia, a traditional ally of Moscow, has already condemned the patriarchal decree on Ukraine. The Georgian Orthodox Church, one of the oldest in the lot, has been taking its time to react.

As in Ukraine, Georgia has an ongoing territorial dispute with Russia and carries a centuries-old grudge against Russian imperialism. The Russian conquest of Georgian territories in the 19th century was followed by colonization of Georgia’s ancient church. Subjugating it to the patriarchate in Moscow, tsarist authorities tried almost literally to erase Georgia’s own religious tradition, whitewashing traditional church frescos and forcing services to be held in the Russian language. Still, the shared faith is one frontier where the two countries have managed to maintain friendly ties throughout the last decades of their tumultuous relationship. This, however, could change.

A church council, known as the Synod, will convene soon in Tbilisi to deliberate on the Constantinople Patriarch’s decree and to produce an official position on Ukraine, said the church’s spokesperson, Presbyter Giorgi Zviadadze. He equivocated on the possible outcome: “In our decision we will be guided by canonical law,” he told IPN newswire. An earlier council failed to elicit a position on Ukraine.

Although Georgian recognition would carry symbolic rather canonical significance, many Georgians believe that Georgia owes it to Ukraine, given that the two countries are comrades-in-arms in their battles against Russian imperial ambitions. Georgia and Ukraine have been supporting one another at international fora and many citizens volunteered to fight in each other’s recent wars that involved Russia.

Supporters of Ukraine in Georgia feel embarrassed by the continued failure of Georgia’s clerical and lay authorities to congratulate Ukraine on its church’s independence. Some ordinary Georgians have been apologizing to Ukrainians over social media for the lack of official congratulations from their church and government.

The Georgian government, which has been trying to normalize ties with Moscow, deferred decisions on Ukraine to the church authorities. “We will be in talks with our Ukrainian friends and also with the Patriarchate [the governing body of the Georgian church],… and our position will be based on these discussions,” said Parliament Speaker Irakli Kobakhidze.

Some Georgian clerics expressed concern that if they recognize the Ukrainian church, the Russian church will respond by absorbing into its jurisdiction Orthodox congregations in the breakaway regions of Abkhazia and South Ossetia. Despite Moscow’s recognition of the two regions as independent states, the Russian Church considers them religiously subject to the Georgian church.

Some observers believe that Georgian hierarchs are averse to jeopardizing friendly relations with their Russian counterparts. “In the Synod we have people with Russophile tendencies,” church analyst Giorgi Tangiashvili told the Georgian service of RFE/RL. “Some have personal contacts, others received education or spend some time up North.”

As a result, Tangiashvili said he doubts that the Georgian church’s final position will be a pro-Ukrainian one. Another Georgian theologian believes that sooner or later all churches will accept the new Orthodox world order. “The Georgian church will have to eventually recognize the autocephaly of the Ukrainian church, but it should do it sooner rather than later,” theologian Gocha Barnov said in an interview with IPN. “I’m worried that Russia may even do it before Georgia.”