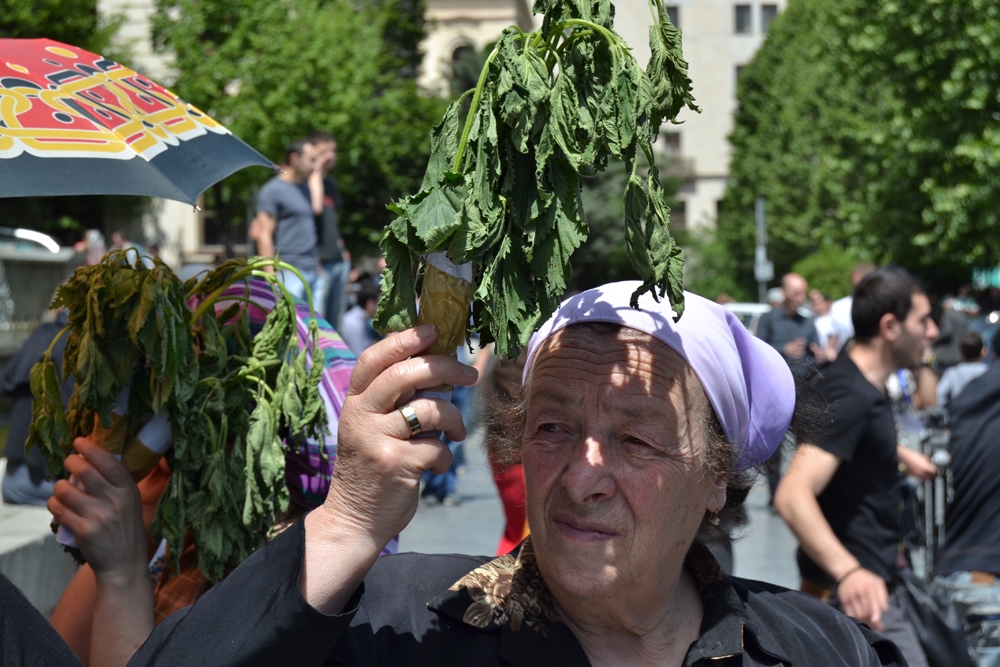 An Orthodox protester holds a strand of nettle as a symbolic whip for sexual minorities. (Photo: Giorgi Lomsadze) 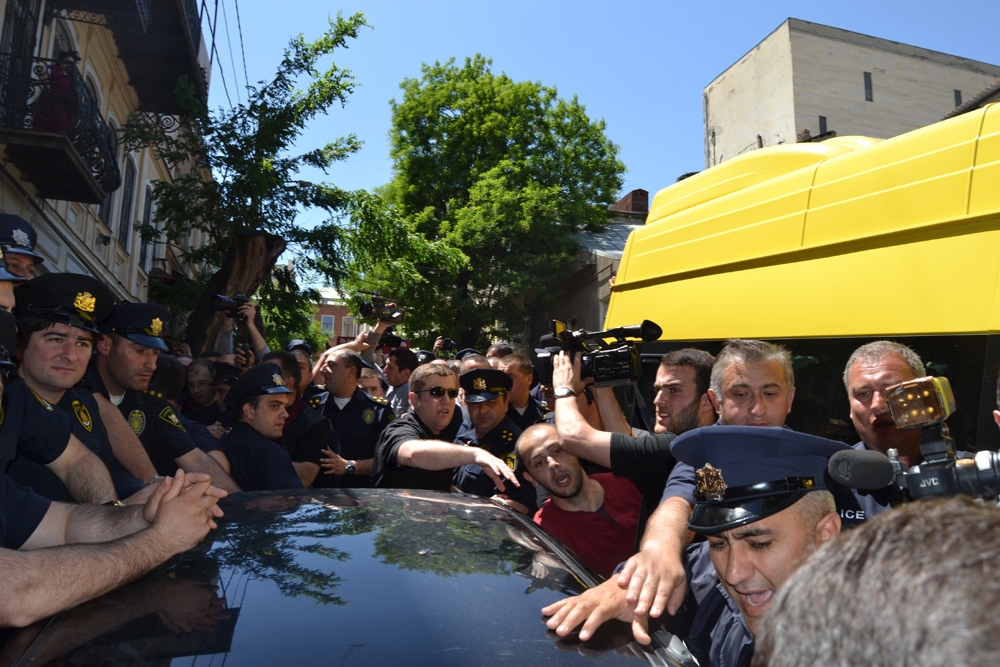 Police attempt to escort gay-rights activists from a house besieged by the protesters. (Photo: Giorgi Lomsadze) 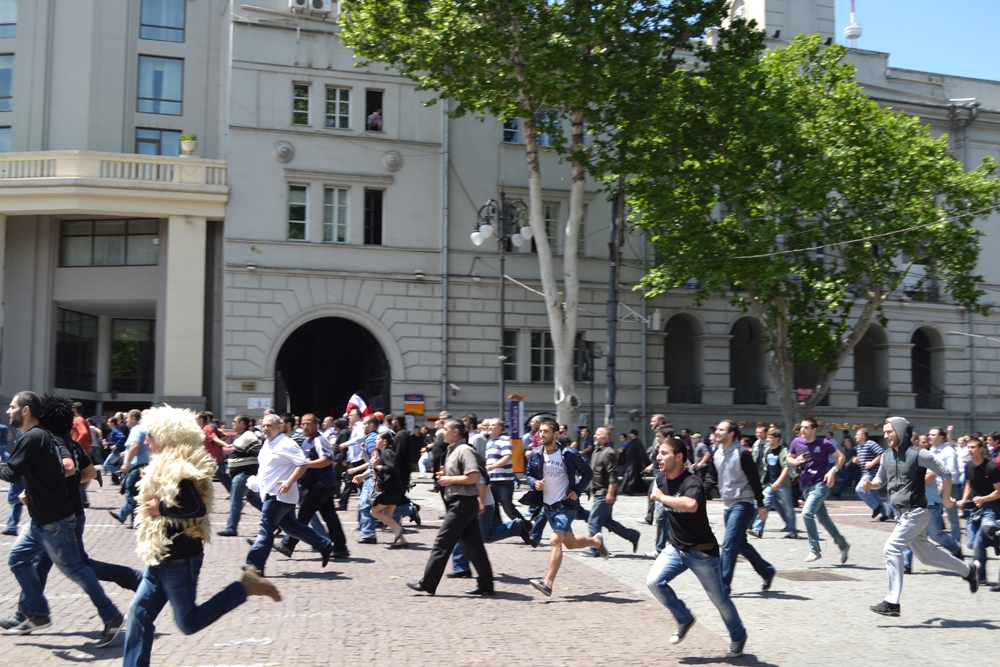 A raging mob in Tbilisi chased away a downtown rally designed to commemorate the May 17 International Day against Homophobia. “Kill them! Tear them to pieces!” yelled the agitated crowd as police struggled to evacuate a handful of gay-rights supporters from the Georgian capital's central Freedom Square.

It was a scene of medieval mob violence, as thousands of Georgians -- mostly young men, but also robed priests and women in headscarves -- stormed through a police cordon and went pursuing the activists. “Where are they? Don’t let them leave alive!” screamed frenzied men, as they took over the square, outnumbering and overpowering police troops.

Police barely managed to herd some of the LGBT activists into municipal buses, before angry protesters surrounded the vehicles. The crowd hit, threw stones and followed the buses as they pushed their way out of the square.

The pursuit continued on the side streets. Just outside the square, a mob tried to storm a house, where several gay rights activists had sought refuge. “Drag them out, stomp them to death,” screamed one woman as  she tried to push her way through a group of policemen, who wrestled with the mob at the entrance of the house.

Youngsters swore, beat and threw various objects at police officers, who eventually pulled the activists into a car. A stampede occurred as the mob tried to chase the car down the narrow street, with some falling into ditches.

At the different corner of the downtown, several activists sought asylum in a grocery store and police managed to fight off the mob that tried to break into the shop.

Very few civilians dared to speak against the violence. “Look at yourselves! You call yourselves Christians?” objected one elderly woman in tears, speaking from a balcony. “Go ahead, kill everyone you are told to hate in the name of God and national values.”

Government officials from both the ruling Georgian Dream and President Mikheil Saakashvili's minority National Movement condemned the violence and blamed each other's policies for it.

Appearing on Rustavi2 television, senior National Movement parliamentarian Gigi Tsereteli called the violence "anarchy," and noted that "This is not the state we were building . . ."

On the eve of the clash, the highly revered leader of the Georgian Orthodox Church, Patriarch Ilia II, called on the city government not to allow an LGBT demonstration in Tbilisi.

The patriarch also urged restrained conduct, but gay-rights activists claim that the church fomented the display of violence by speaking out against the rally.

In what some participants described as a voluntary initiative, gay-rights opponents, led by priests, gathered in the morning of May 17 and marched toward Freedom Square with posters like “Stop Promoting Homosexuality in Georgia” and “Homosexuality is the Worst Sin.” Parish women held strands of nettle in their hands.

“Nettle has curative properties,” one woman commented to EurasiaNet.org. “A few hits in the right place and it will kick those demented thoughts out of their heads.”

As the rally degenerated into violence, protesters screamed verbal abuse at Georgia’s National Ombudsman Ucha Nanuashvili and a US embassy official, who also showed up at the demonstration.

Brawls broke out in several parts of town and dozens were hospitalized. The tensions that continued for hours steamed off after the church called on the believers to relocate to the city’s main cathedral, Holy Trinity.

Prime Minister Bidzina Ivanishvili earlier had emphasized that sexual minorities have equal rights with other Georgians under the law, adding that "Society will get used to it." So far, it doesn't look like it has.---This post was updated at 9:05pm to correct a typo. Gay-rights opponents' poster read "Homosexuality is the Worst Sin" rather than "Homophobia is the Worst Sin."