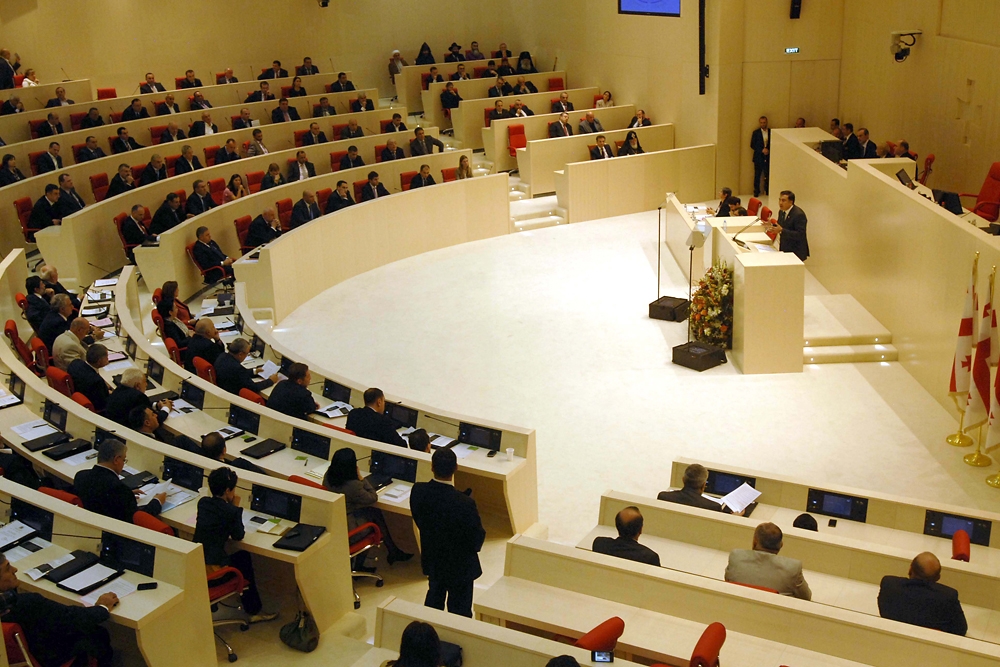 The Georgian Dream coalition, which controls the parliament in Georgia, seems to be playing fast and loose with parliamentary procedure, at least when it comes to its efforts to relocate the legislature.

Georgian Dream leaders have a straightforward desire: to bring the country’s parliament back from the provincial town of Kutaisi to Tbilisi, Georgia’s largest city. There’s just one catch. The Constitution, according to a 2009 amendment orchestrated by ex-President Mikheil Saakashvili, fixes Kutaisi as the parliamentary seat.

The Georgian Dream currently does not have the 100 votes needed to amend the constitution again. But that isn’t stopping coalition leaders from pursuing their preference.

For the past eight months, dipping into its 2013 discretionary budget of 60 million lari ($35.7 million), the Georgian Dream administration has issued tenders totaling over $10.7-million (18-million lari) to remodel the original Tbilisi legislative chamber, according to data compiled and distributed by the office of Parliamentary Speaker Davit Usupashvili.

The tenders, listed on the government’s procurement site, range from 3.5 million lari ($2.1 million) for furniture and a building-wide Internet system to 30,000 lari ($18,072) for elevator maintenance. Most of the work, including the installation of voting devices in the assembly hall itself, will occur in 2013, Davit Onoprishvili, chair of parliament’s Budget and Finance Committee, told EurasiaNet.org.

The Georgian Dream also has developed a draft constitutional amendment to authorize parliament’s move back to Tbilisi. But no vote has been scheduled for this year.

Critics say that in funding the refurbishment of the Tbilisi chamber, the Georgian Dream is jumping the gun. Aides to Speaker Usupashvili’s office, as well as representatives of the Chamber of Control, Georgia’s state auditing agency, insist that a constitutional amendment isn’t necessary in order to make repairs on the Tbilisi parliament building. The structure belongs to the legislature, they say, and, therefore, may be equipped for legislative use.

In an interview with EurasiaNet.org, Usupashvili said that the tenders were meant to get the building “in working condition.” Even rooms designed to accommodate committee meetings are no longer usable, he said.

The structure’s courtyard, however, did host the November 17 inauguration of President Giorgi Margvelashvili.  One wing also contains offices for the US-government-financed Millennium Challenge Corporation.

Usupashvili did not specifically link the reconstruction to parliament’s return to Tbilisi, but underlined that both public support and “the political will” for such a move exist. He expressed confidence that the Georgian-Dream coalition will get the votes needed to authorize the relocation when "the time will come for that."

The extent to which the spend-first-vote-later tactic riles Saakashvili’s United National Movement is not clear. The party, which opposes a move from Kutaisi back to Tbilisi, did not respond to EurasiaNet.org’s requests for comment in time for publication.

During most of Saakashvili’s presidency, the National Movement-led government channeled funds for construction of the Kutaisi parliament through the city mayor’s office. Information about public spending during the Saakashvili era was not easily obtained.
Given that history of opaque spending practices, many Georgian observers aren’t ready to challenge the Georgian Dream on the legislative-move issue – as long as incumbent authorities are up-front about expenditures.

That doesn’t mean that analysts don’t have concerns. Levan Avalishvili, board chair of the Institute for Development of Freedom of Information, questioned the wisdom of spending a considerable sum of public money on duplicate government facilities. Aside from two parliament buildings, the country soon also will have two presidential administration buildings -- a glass-domed structure built under Saakashvili for an undisclosed price, and a 19th-century Tbilisi mansion being retooled for the offices of the recently inaugurated Margvelashvili.

The Saakashvili-era presidential administration building, deemed too showy for the chief executive’s now more modest constitutional responsibilities, is slated to house a university. No potential tenant has been identified for the Kutaisi-based, space-ship-style parliament, erected for an estimated 300-million lari (over $178 million).

Keeping parliament or the government accountable for how they spend public money is difficult when so much use is made of discretionary spending, noted Mark Mullen, a member of the board of directors for Transparency International Georgia, an anti-corruption watchdog.

As with the government and presidential reserve funds, no outside control exists over how parliament decides to spend its annual budget. “The difference is in an older democracy the procedures of public expenditure are very tight,” Mullen commented. “So, the problem in Georgia is about the procedures. … Whenever you need money, you can just do it.”

Under Georgia’s procurement law, discretionary spending can occur via direct contracts, rather than public tenders, if the government deems it necessary for state interests. Avalishvili said changes were needed to make public and elected officials more accountable for their use of public funds. “[The] more people know about what the government is doing, the more they can participate in policymaking,” he said.