Georgian monks squared off against Azerbaijani border guards in a dispute over access to an ancient monastery that straddles the two countries’ poorly defined frontier. 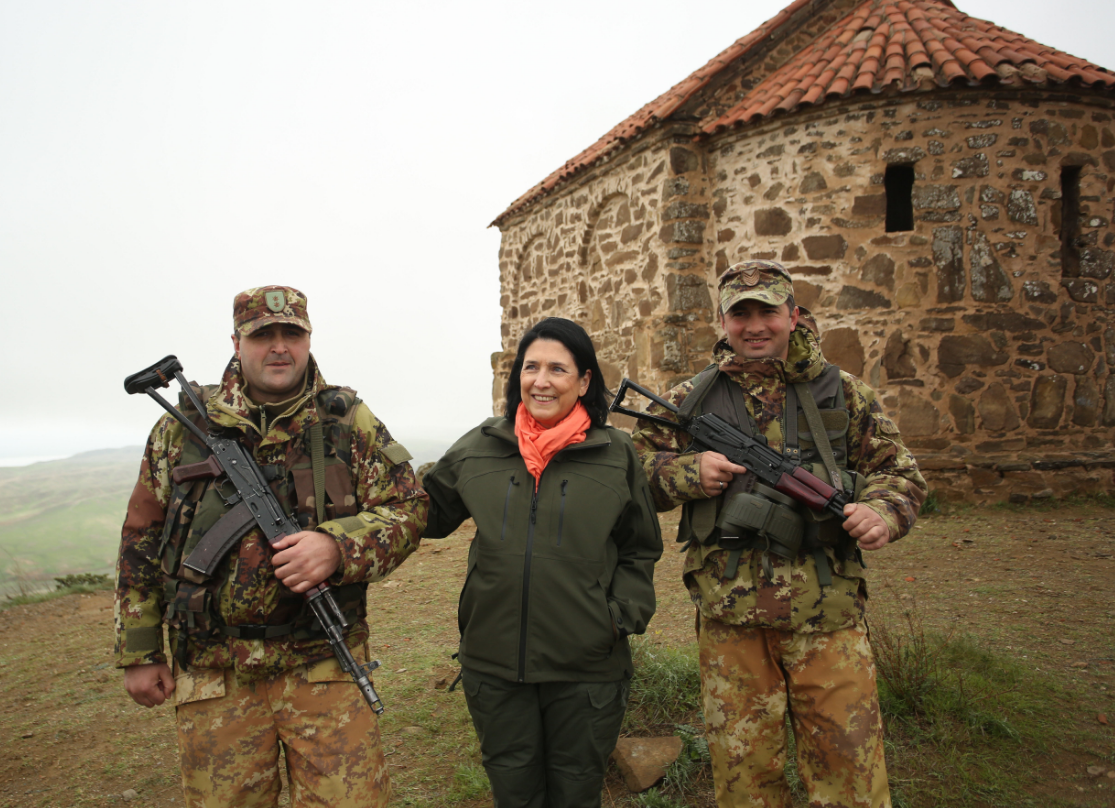 Georgian President Salome Zourabichvili visits the Davit Gareja monastery on the border with Azerbaijan. Shortly after the visit, Baku shut off access to the holy site. (photo: president.gov.ge)

In the Caucasus, where each country believes it was allotted an unfairly small piece of land by the whims of history, the border between Georgia and Azerbaijan has stood out as the least problematic of the frontiers. Each having far larger territorial disputes to settle, Azerbaijan and Georgia have never properly delineated their almost 500-kilometer border, instead concentrating on building the most robust economic and strategic partnership between any two states in the region. But a recent imbroglio over an ancient monastery complex reluctantly shared by the two countries has demonstrated that borders should not be left unmarked, even among friends.

Georgian monks, Azerbaijani border guards and international tourists commingle in Davit Gareja, an impressive network of rock-hewn monasteries, churches and vestries stretched over the scrubby, lunar slopes of Mount Gareja. The area is a major holy and historic site for Georgia and a strategic military height for Azerbaijan.

Founded in the 6th century, Davit Gareja has seen the borders around it change many times until the Soviet government divided the area between the then-union republics of Azerbaijan and Georgia. While they were at it, the Soviets also set up a military training site in the complex, a cradle of Georgian architecture, painting and science.

After escaping the Soviet Union in 1991, Georgia tried to regain control over the entire complex by offering land elsewhere as part of a swap with Azerbaijan, but the talks were eventually shelved and the special demarcation commission has since lain dormant. The two sides have an informal agreement to allow Georgians or visitors to Georgia to access all of Davit Gareja’s main sites until the issue is finally resolved.

Without a final resolution in place or in sight, Davit Gareja occasionally becomes the site of Georgian-Azerbaijani standoffs that tend to get inconclusively resolved through speed-dial diplomacy between Baku and Tbilisi.

The latest confrontation began on the eve of Orthodox Easter, when Azerbaijani border guards blocked access to part of the complex, prompting outrage from Georgian monks, worshippers, and tour guides. Georgian church officials especially complained about not being allowed to enter the medieval monastery of Udabno that features a fascinating array of Georgian frescos. Azerbaijan considers Udabno to be situated on its territory, but many Georgians dispute that.

After news broke about Udabno being blocked off, some Georgians and Azerbaijanis engaged in heated debates in online message boards over who owns Davit Gareja. Georgian tour guides held a rally in front of the Azerbaijani Embassy in Tbilisi. “We are here to say that Davit Gareja has no other home but Georgia,” one tour guide told journalists at the rally.

To defuse the tensions, the two countries’ foreign ministries spoke and Davit Gareja was fully reopened, but there are continued concerns about the possibility it could close again. And Azerbaijan reportedly beefed up their border guard contingent at the complex, which the Georgian monks saw as a provocation. “Before, you would have two [Azerbaijani border guards] ... and now there are about 18 of them,” said Archimandrite Kirion Oniani, a superior at the monastery complex.

The Archimandrite went on to say that the functioning of Davit Gareja should not have to depend on Azerbaijan’s mood swings. “Now I open it, now I close it, now I’m in good spirits, now I’m not… this is not normal,” he said. The perspective is different in Azerbaijan, where many say that the Georgians have been allowed access to various sites thanks only to the Azerbaijani authorities’ good will.

Georgian Interior Minister Giorgi Gakharia urged restraint on May 1, amid fears of escalation. “I call upon everyone who is trying to take advantage of this issue and foment ethnic tension to treat this matter with extreme caution,” Gakharia said.

Azerbaijan has maintained a reserved position. The Ministry of Foreign Affairs merely reiterated that Baku is ready to discuss finally demarcating the Georgian-Azerbaijani border, which could help resolve the monastery issue. “Azerbaijan has always been a supporter of the delimitation of the Azerbaijani-Georgian border in a swift manner and is ready to finalize this process in the nearest future,” said Leyla Abdulayeva, a ministry spokesperson.

Many Georgians in fact blame their own president, Salome Zourabichvili, for igniting the trouble. Zourabichvili raised the issue of the delimitation of the Azerbaijani-Georgian border back in March, during her first visit to Azerbaijan in her capacity as president. She then visited Davit Gareja on April 20, a week before Easter, where she met Georgian border guards and called for progress in the border demarcation process. “The question of defining the border brooks no delay,” she said, purportedly speaking from the spot that Azerbaijan regards as its territory.

Some believe Zourabichvili’s words and actions provoked Azerbaijani authorities to respond. “The Azerbaijani side said, ‘the visit was not agreed with us, you did not inform us’ and took retaliatory steps,” said Archimandrite Kirion.

Opposition parties, who don’t recognize Zourabichvili’s legitimacy and need little excuse to attack her, lambasted the president for her alleged lapse in diplomatic judgement. “I’m sorry but if this woman is a diplomat … then she should know that tone is very important,” said Tinatin Bokuchava, a member of the opposition United National Movement party.

Zourabichvili defended her approach, saying there was nothing provocative about a Georgian president visiting a Georgian monastic complex and calling for the swift demarcation of the border. Still, she struck a conciliatory note, telling reporters on May 1 that delinating the border will only “strengthen Georgian-Azerbaijani friendship.”