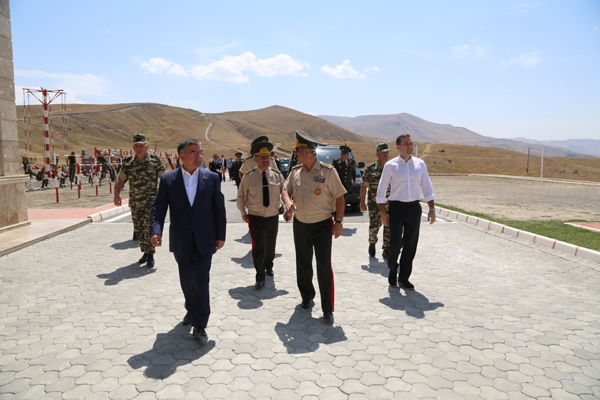 The nascent alliance between Azerbaijan, Georgia, and Turkey took a big step forward this week when the defense ministers of the three countries met trilaterally for the first time and promised to carry out joint military exercises.

The three ministers, meeting in the Azerbaijani exclave of Nakhchivan on August 19, agreed to work on "tripartite exercises to enhance the combat capability of the armed forces of the three countries and the achievement of mutual understanding during joint military operations, including the organization of joint seminars and conferences, cooperation in military education, development of military technology, the exercises for the protection of oil and gas pipelines," said Azerbaijani Defense Minister Zakir Hasanov after the meeting.

While the specific results of the meeting may have had to do with protecting joint infrastructure like the pipelines and railroad projects that the three countries work on together, the geopolitical import of the meeting was undeniable. With Russia's new assertiveness and the recent spike in tensions in Nagorno Karabakh, Georgia and Azerbaijan are keen to get support wherever they can. "Georgia is very fortunate to have such great neighbors and strategic allies like Azerbaijan and Turkey," said Georgian Defense Minister Irakli Alasania. "And these challenging times from the security standpoint in the wider region we need to cooperate more closely and we need to be very tightly in touch with each other to defend the critical infrastructure that is very integral to our development."

Alasania also took pains to emphasize that the alliance is not directed at anyone in particular: "I would like to underline that the only purpose of our meeting is to regulate security and defence issues and it is not directed against anyone. Moreover such meetings provided additional basis for regional security."

But that message wasn't necessarily the one that Azerbaijan wanted to send. Elchin Mehdiyev, a senior correspondent for the Azerbaijani news service Trend.az, wrote that Armenia should take the meeting as a warning:

All this testifies to the fact that a new, more powerful format is being created to ensure security in the region. Of course, cooperation in the above-mentioned areas will further increase military strength, professionalism of armies, potential of military equipment in these countries. This will greatly limit the ability of external forces, trying to exert influence in the region.

The meeting at the same time is a substantial message for Armenia, which continues to pose a threat to security in the region.

While assessing the power of the Azerbaijani army during Armenia's own recent provocations on the contact line between Azerbaijani and Armenian troops, Armenia must thoroughly think and realize that these processes will not promise a good future for it. Armenia must take a constructive stance on the Nagorno-Karabakh conflict settlement. Otherwise, the existence of Armenia due to external donations, and which is on the verge of collapse will be called into question.

Armenia downplayed those concerns, saying that the presence of Georgia -- which has good relations with Yerevan -- in the grouping would blunt any anti-Armenian initiatives: “Armenia has a broad spectrum of mutual security interests with our Georgian neighbors, underpinned by a number of cooperation endeavors, including in the defence sector," said Deputy Defense Minister Davit Tonoyan. "I believe Georgian engagement will restrain these tripartite relations from being at odds with Armenian national security."

Meanwhile, there seems to have been curiously little coverage of the meeting in the Russian press. One exception, a piece on the meeting in Russian newspaper Nezavisimaya Gazeta, focused on the amount of Russian weaponry that Azerbaijan is buying, a not-so-subtle hint that nice words are one thing, but money talks.