Georgia: Betting on Clay and Kvevri for Entrée into International Wine Markets 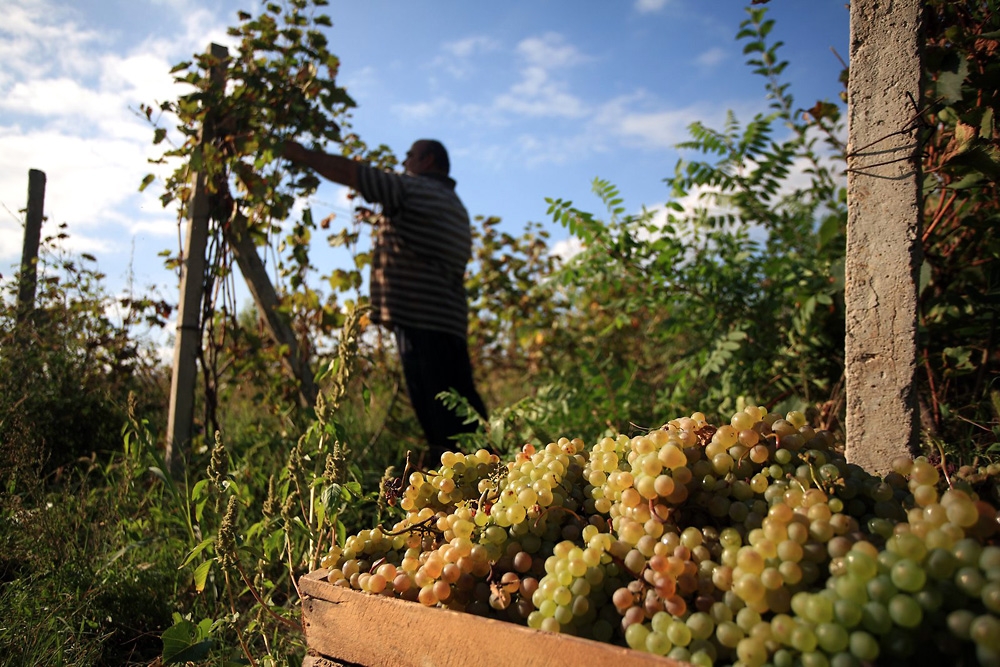 Grapes are handpicked during the fall harvest at a Georgian vineyard in Kakheti. 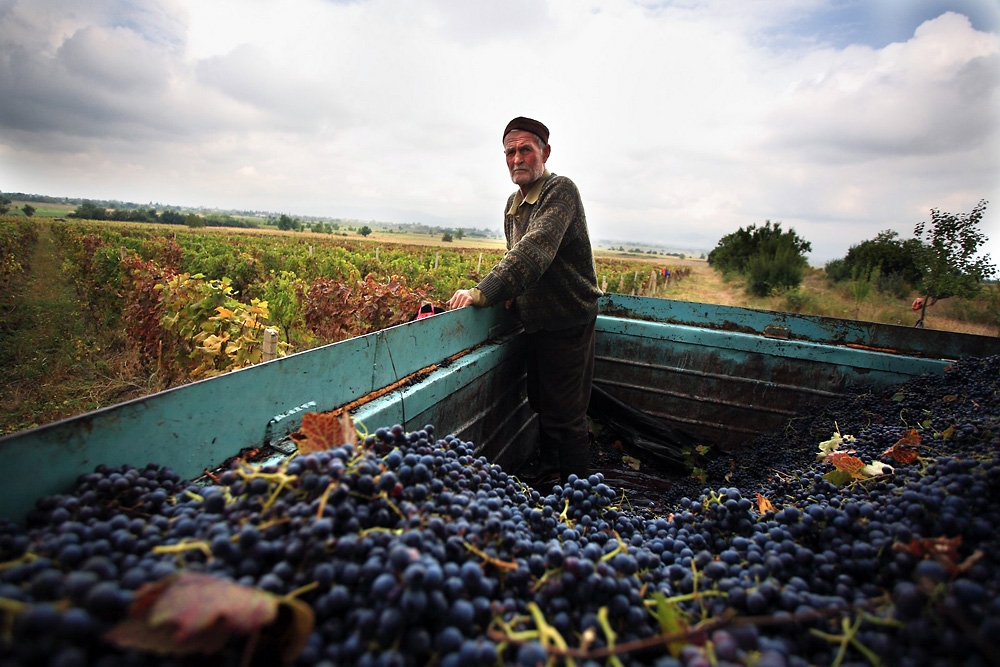 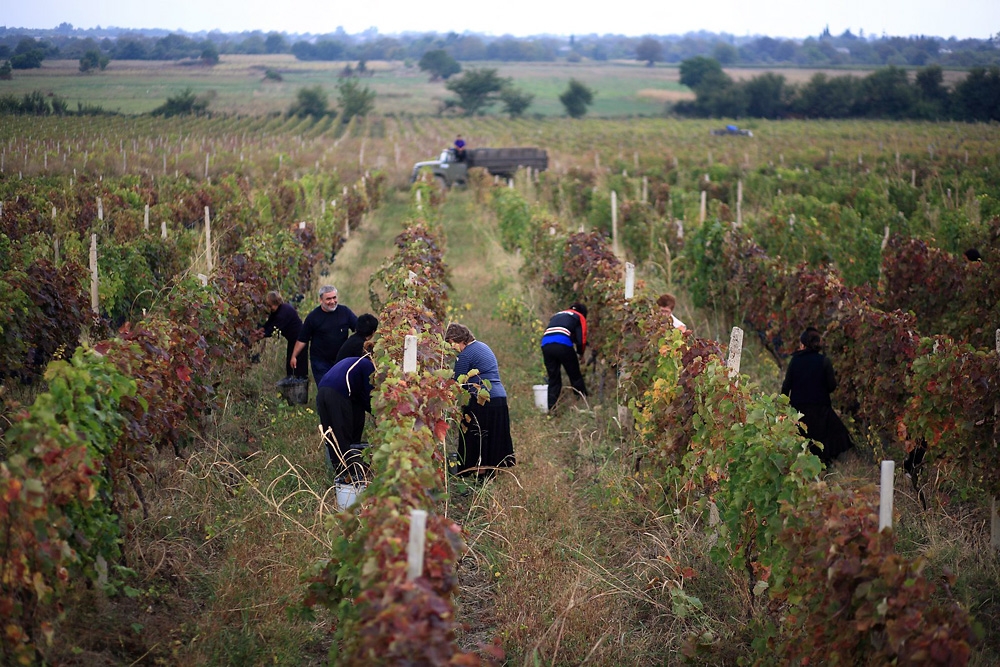 The southeastern region of Kakheti is Georgia’s viniculture hub. 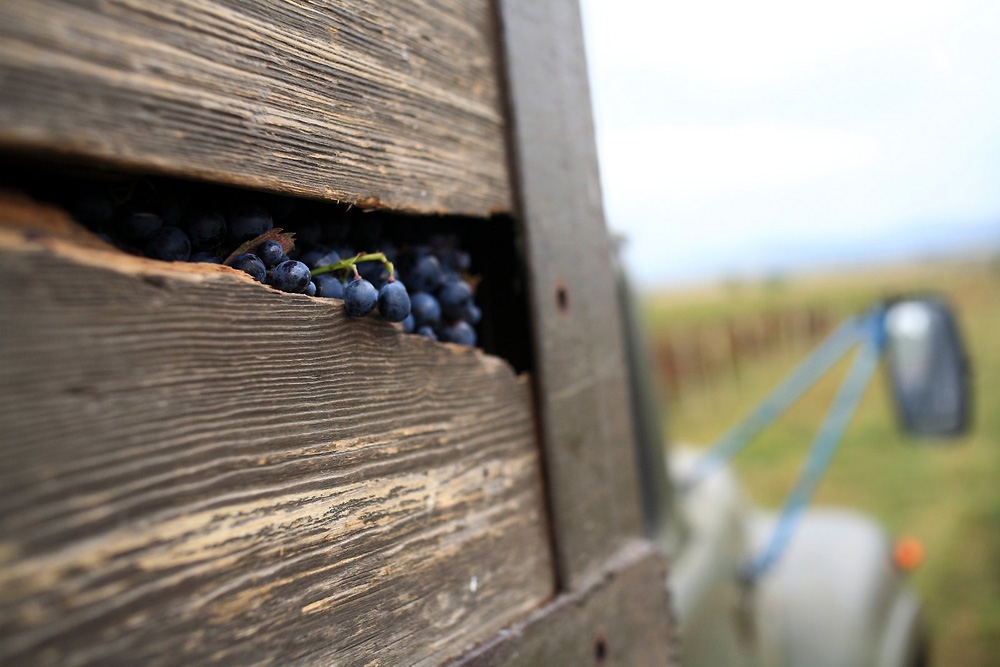 Georgia prides itself as the birthplace of winemaking. 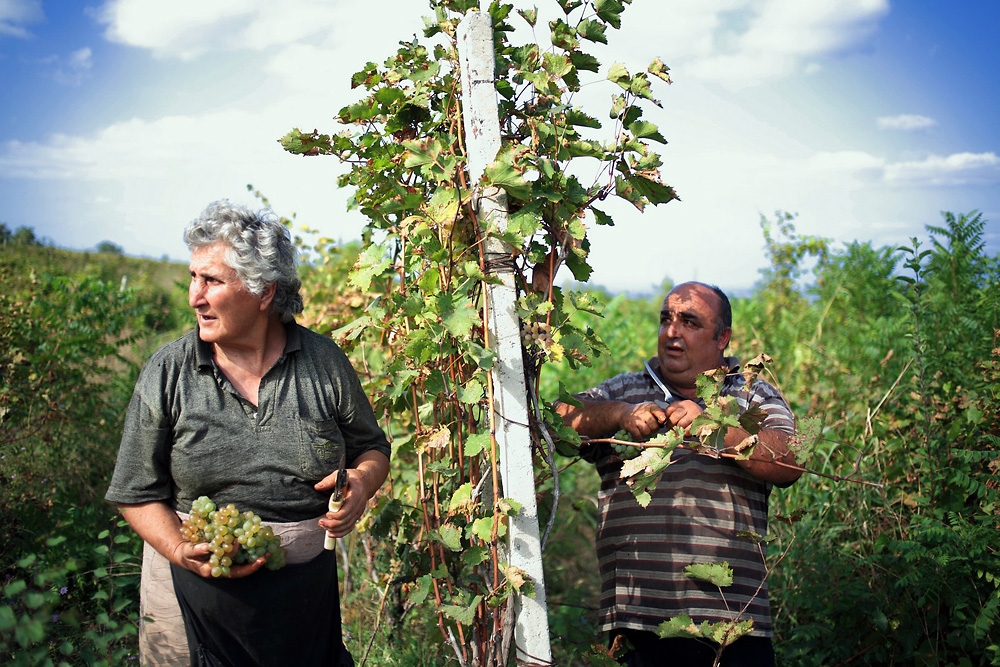 Winemaking in Georgia has been traced back to 8,000 years ago. 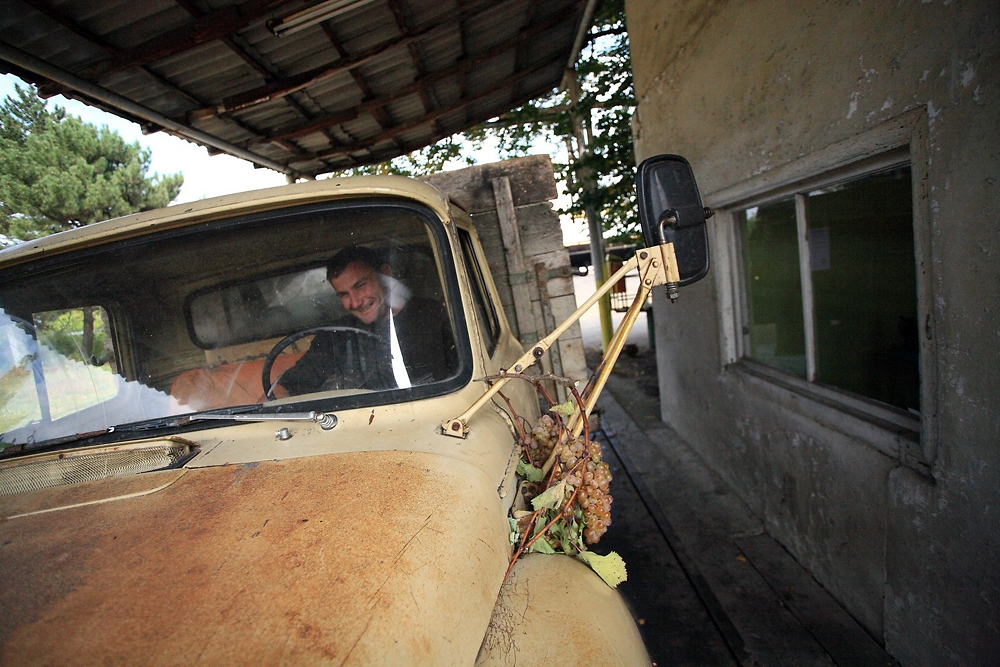 Bunches of white grapes hang from the mirror of a truck delivering fresh-picked grapes to be turned into wine. 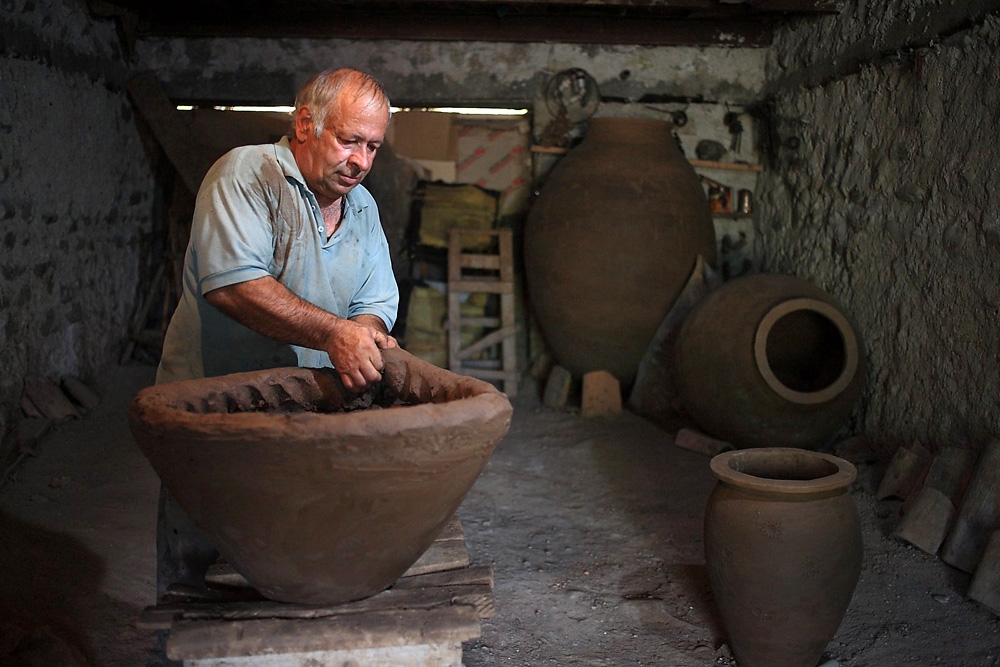 Remi Kbilashvili adds clay to a terra cotta vessel, which will be used to make Georgian kvevri wine. 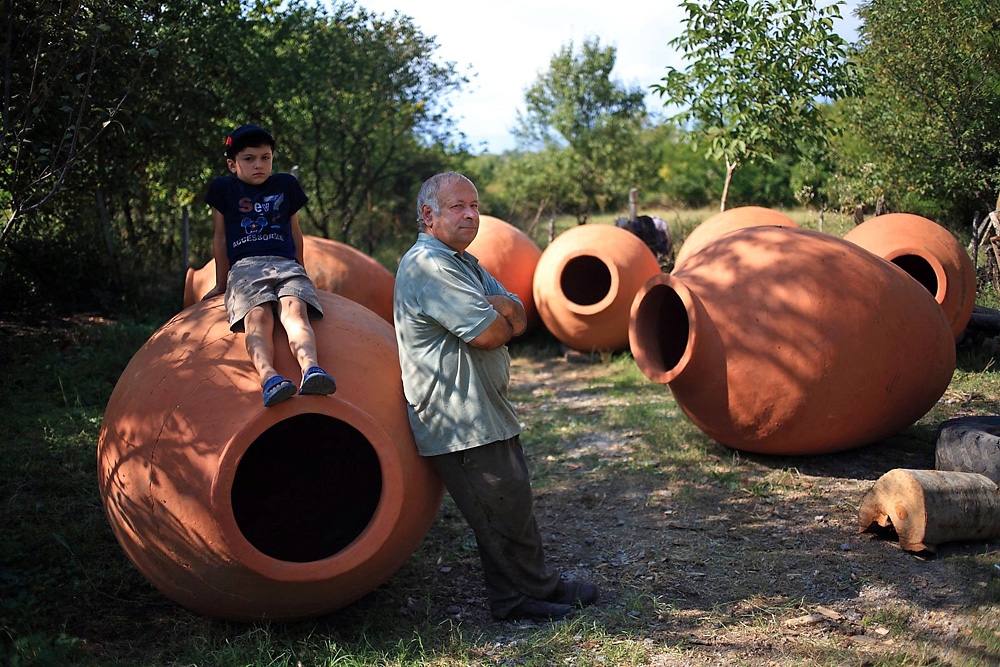 Kbilashvili poses amongst several of the vessels he recently baked. 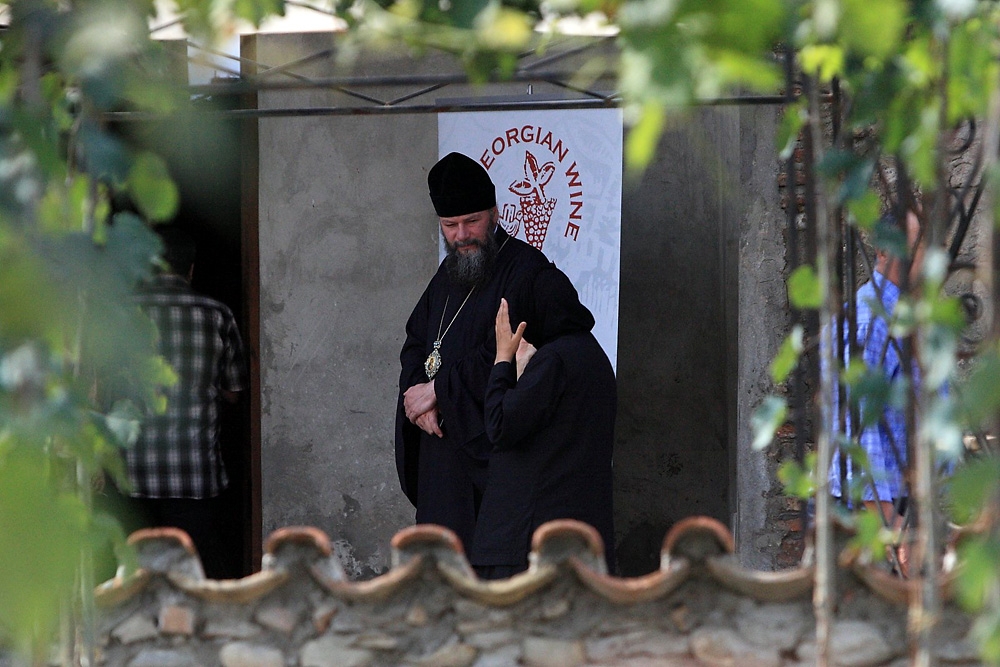 Monks at the Alaverdi monastery welcome symposium participants to the complex where they serve wine from their kvevri cellars. 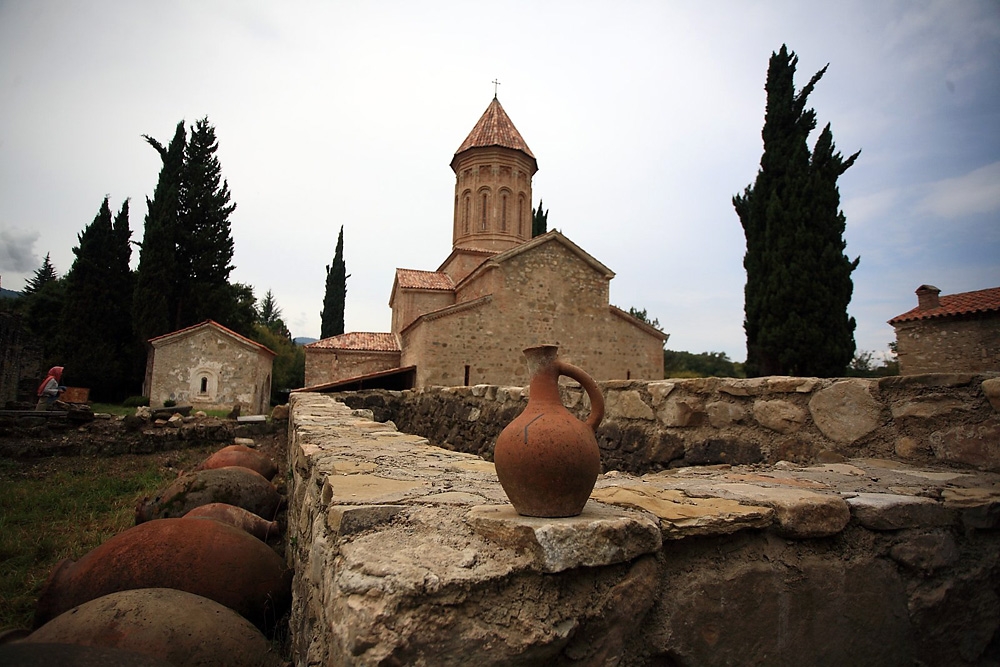 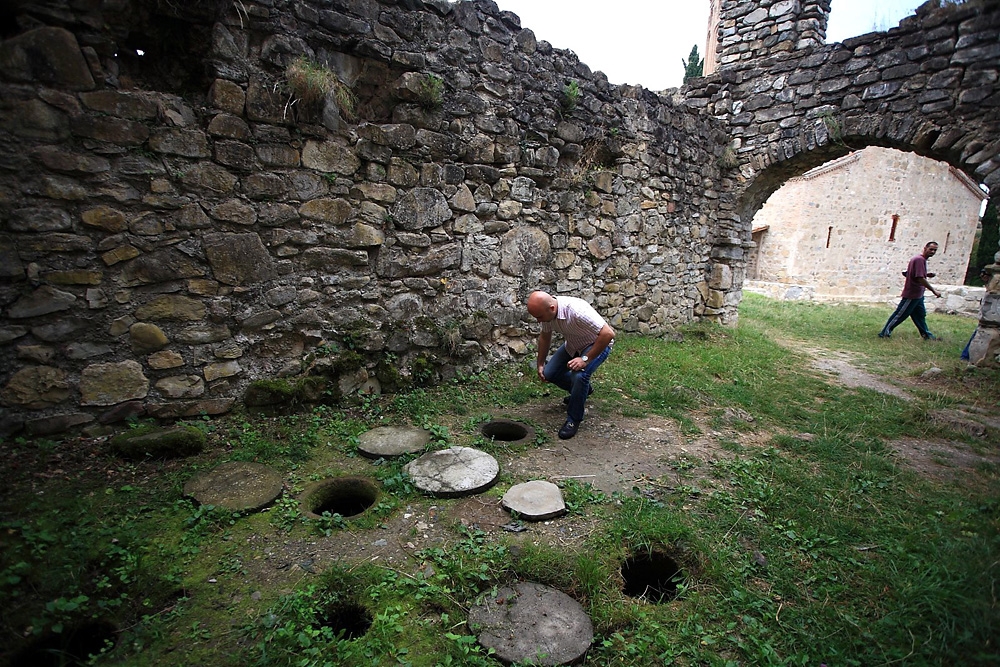 A wine symposium participant looks into old kvevris at the Ikalto wine academy. 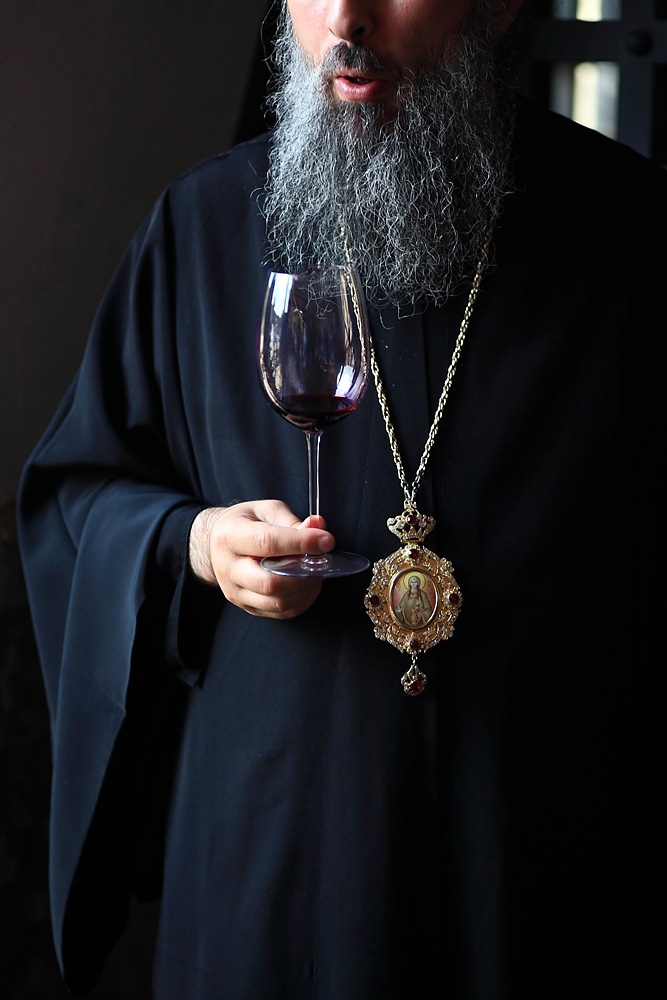 A monk at the Alaverdi monastery shows symposium participants one of the wines they produce. 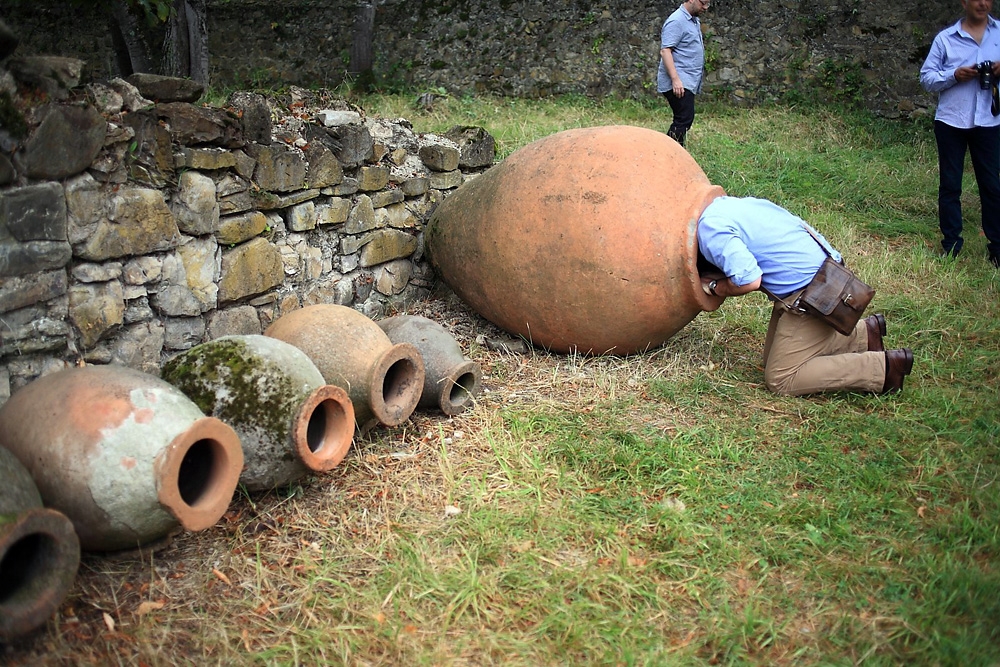 A participant with the wine symposium sticks his head in an old kvevri clay vessel at the Ikalto wine academy. 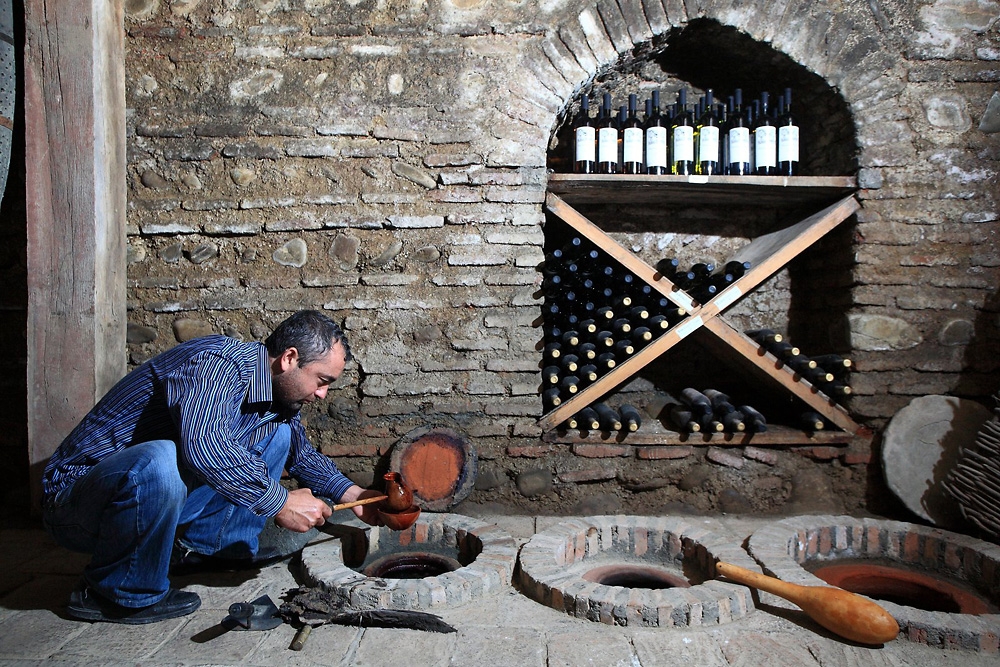 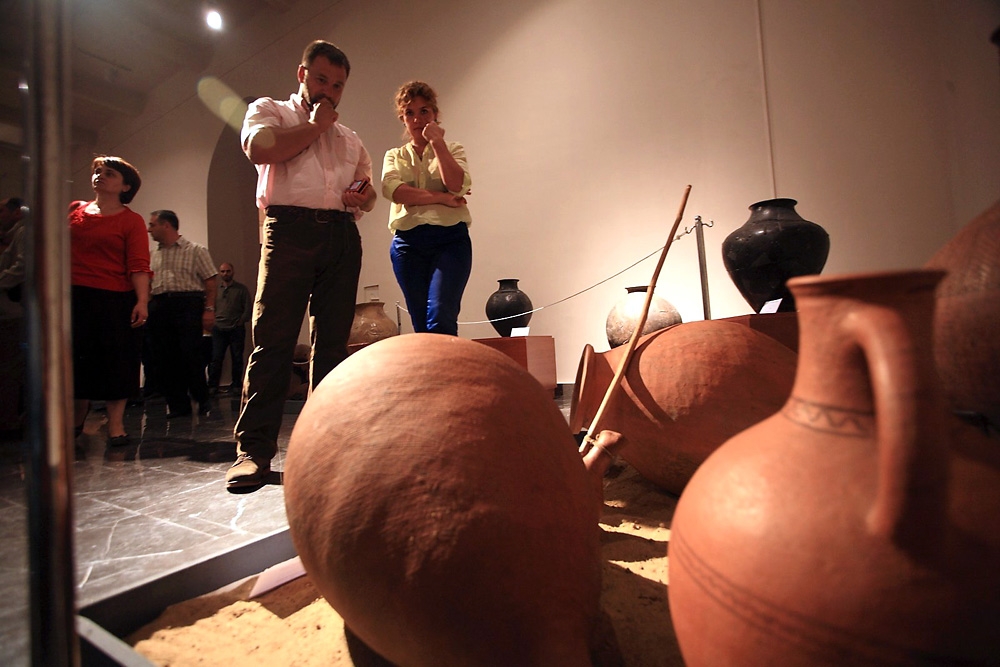 Visitors to the museum of wine in Tbilisi look at traditional kvevri clay vessels. 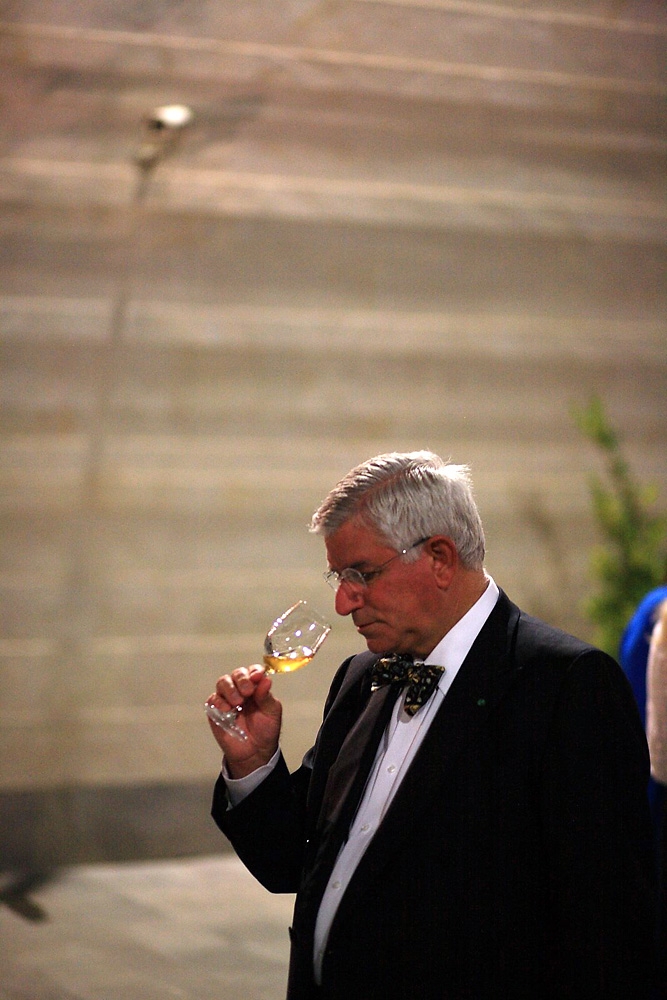 An oenophile samples a wine at the Kvevri Wine symposium in Tbilisi. 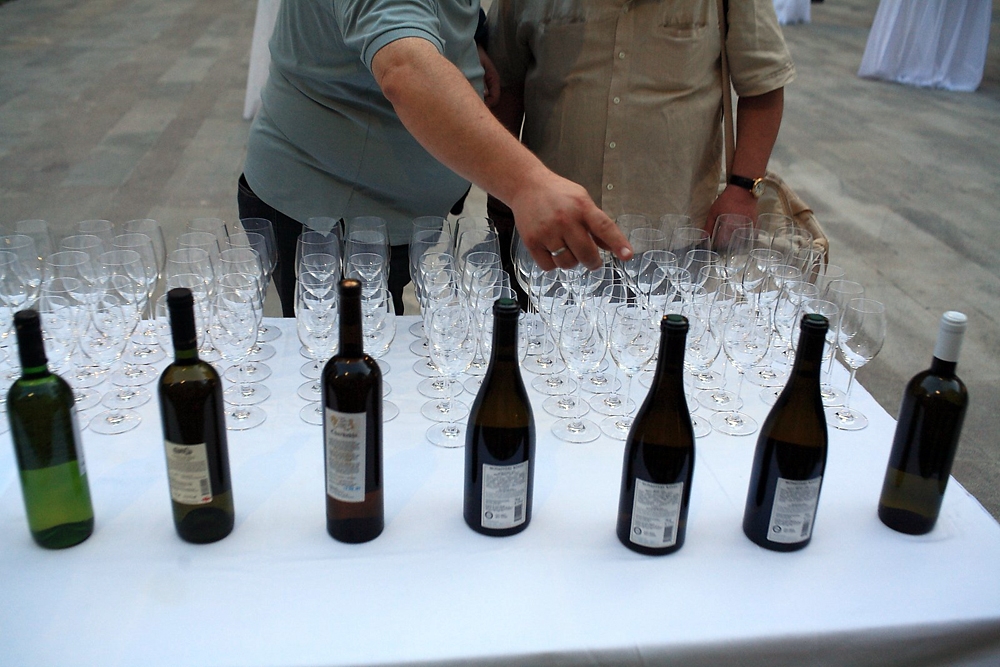 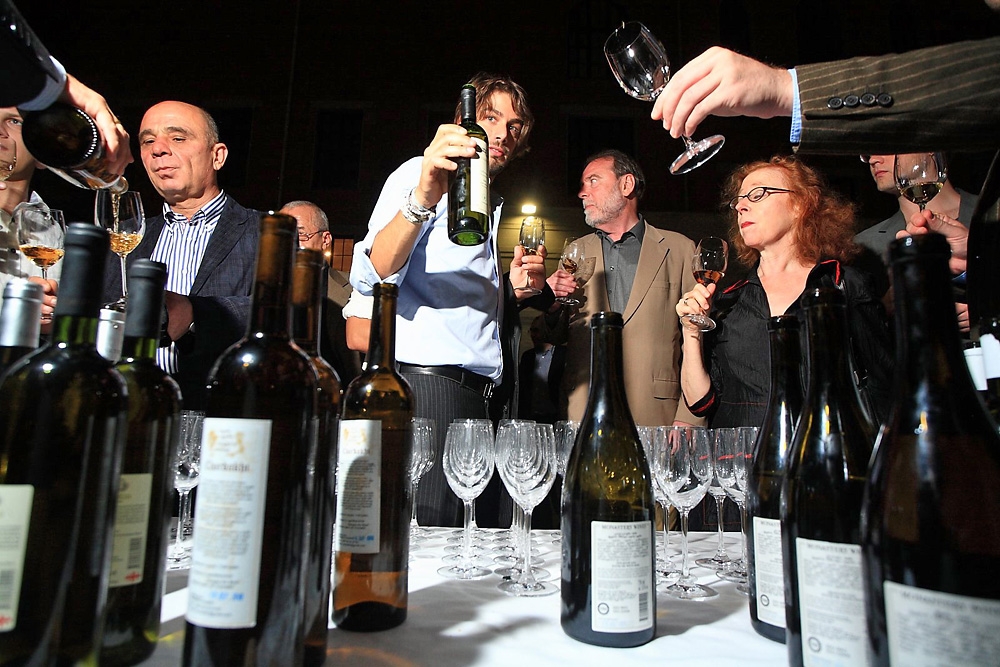 Participants with the Kvevri Wine symposium finish the evening with Georgian wines.
prev
next

It’s grape-harvesting season in the region of Kakheti, the sun-dappled epicenter of Georgian winemaking, and 57-year-old village potter Remi Kbilashvili is busy working with the latest hope for Georgia’s success in international wine markets -- a giant, terra-cotta amphora or kvevri. The kvevri method for fermenting and aging wine, a millennia-old tradition in Georgia, is now used by various Slovenian and Italian wine companies, including renowned Italian winemaker Josko Gravner, to cater to growing demand among high-end consumers for all-natural wines with a rustic taste. It’s a market that Georgia, home of the kvevri, figures rightly belongs to its own winemakers and kvevri artisans. Kvevris crafted by Kbilashvili -- for 700 to 800 lari (about $411 - $470) each -- are sent from his tiny village of Vardisubani to customers not only throughout Georgia, but abroad to Italy. It can take more than three months for him to shape the brown, doughy clay by hand into a kvevri form. It takes a week for the kvevris then to bake in the 1,000-degree Celsius heat of a large, brick kiln, fueled by firewood. Local kvevri winemakers take the completed amphoras, lined with beeswax, and bury them neck-deep into the ground to receive grape juice, stomped out of grapes by foot. A mixture of grape stems, skins and seeds is next added to the juice to macerate, giving the kvevri wine an intense color and distinct, husky flavor. “The advantage of kvevri-made wine, when made in full compliance with the procedure, is that it is completely natural,” commented Giorgi Tevzadze, chairman of Georgia’s newly formed Kvevri Foundation. “The wine is kept in the stable coolness of the earth and is filtered by relocating it from one kvevri into another.” Buried kvevris are found all over Georgia, including in the ruins of an ancient monastery and a 12th-century academy where viticulture and winemaking were taught. The Georgian practice of making kvevris – and wine itself -- has been traced back as far as 8,000 years, but, in Soviet times, when mass production became the order of the day, factory-made containers eventually nudged the terra-cotta amphoras out of fashion. Today, as Georgia ventures, slowly but surely, into the viciously competitive global wine market, it’s looking at the kvevri (also sometimes spelled “qvevri”) as something to give it an edge over the European, American and Australian wines to which western palates are accustomed. “Basically, the Italian winemakers, who took kvevri from Georgia and make kvevri wine, have created a category for the Georgians,” said Chris Terrell, a California-based importer of Georgian wines. “Their [Italian] wines are already selling very, very expensively, so now these [Georgian] wines come in and they have very good value for the people who know.” Josko Gravner amphora wines, made with Georgian kvevris, range from $50 to $150 in the US; more than a twofold difference with the retail price of one Georgian-made kvevri wine sold in New York City. Terrell says that the kvevri wines he imports from Georgia fare better in the “high quality, organically-farmed, all-natural wines” market than do Georgian mainstream brands in the table-wine segment. “The quality is getting better, but the labeling and packaging could use some improvement,” he elaborated. Along with such improvements, observers also say that Georgian wine needs aggressive advertising to raise its profile in new markets like the US. To further this goal, a recent wine symposium, sponsored by the US Agency for International Development, drew a crowd of western oenophiles to Kakheti to experience kvevri culture amid the grape-harvesting season, or rtveli. At Alaverdi, a 6th-11th century monastery set against the Caucasus’ soaring backdrop, monks served up from their kvevri cellars a heady, dry red Saperavi and a pungent, amber-tinged white Kisi wine. As the visitors sipped the brew, one New York City restaurateur reported a growing customer interest in Georgian wine, while a Texas potter recounted how a surprise kvevri order from a local wine producer had prompted his decision to travel to Georgia and study the craft. Yet despite all the fascination with the kvevri, specialists caution that the time-consuming, painstaking nature of making the amphora and its wine will prevent the method’s use from becoming widespread. Larger companies within Georgia are building kvevri wine cellars, but these serve as smaller attractions for tourists and wine aesthetes; not as mission-critical infrastructure. Using amphoras, a wine company “can produce a maximum of 20-25 tons of kvevri wines,” said Tevzadze. That compares with a volume in the hundreds of tons for more modern methods. Each of the 15 Georgian wineries in the Kvevri Foundation produces just three to 10 tons of wine per season, he added. “Making wine in a kvevri is so laborious and also expensive that it will never become mainstream,” said Tevzadze. One successful American winemaker based in Georgia, though, says this is not necessarily bad news for the country’s kvevri winemakers. John Wurdeman, owner of the Pheasant’s Tears winery, believes kvevri aficionados should stay true to the terra-cotta vessels’ reputation for earthy-tasting wines of small volume, but high quality. Said Wurdeman: “It’s a niche product for a niche market.”