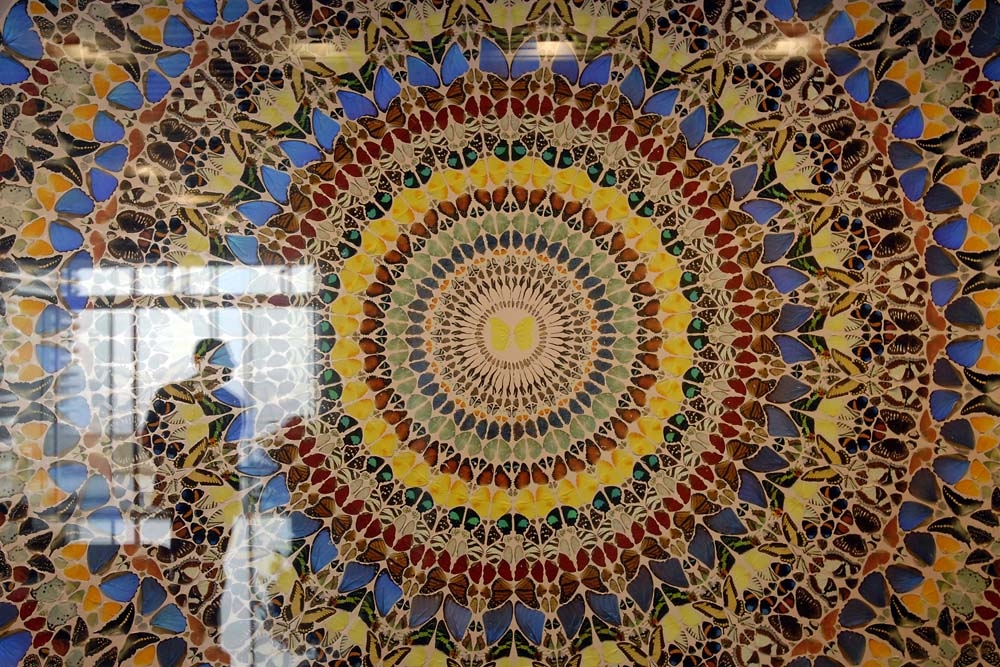 A work by Damien Hirst adorns the wall of Bidzina Ivanishvili's business center and residence in Tbilisi. 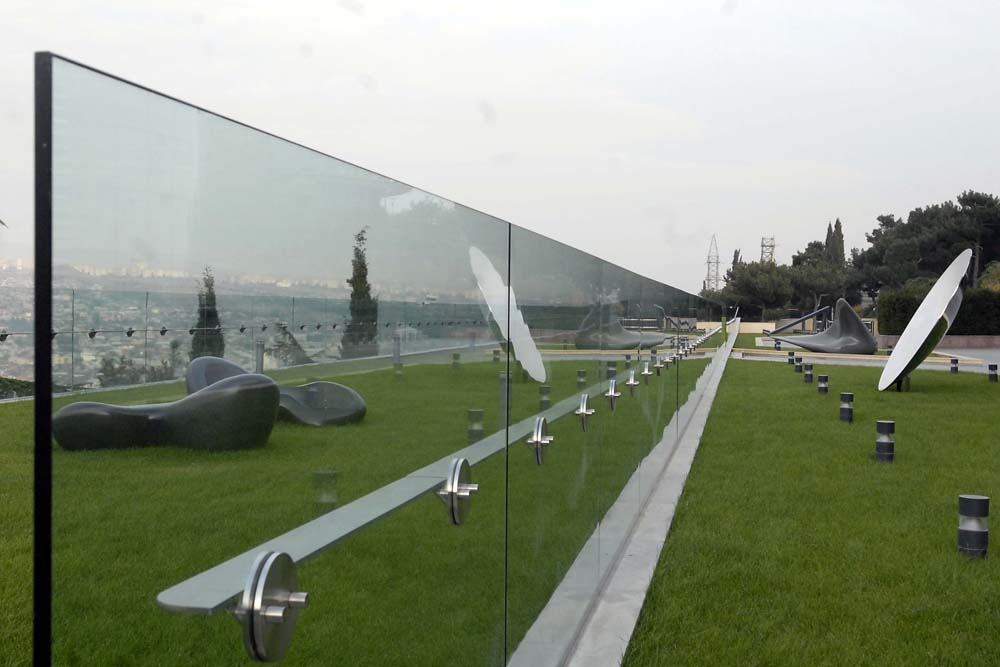 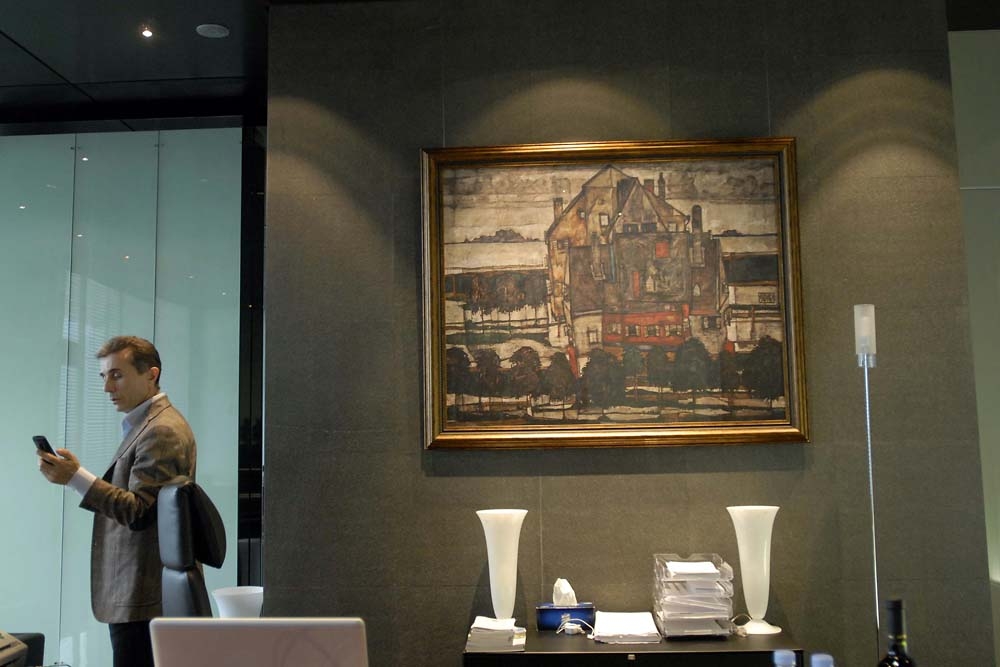 A 1915 piece by Egon Schiele hangs on the wall of Ivanishvili' office. 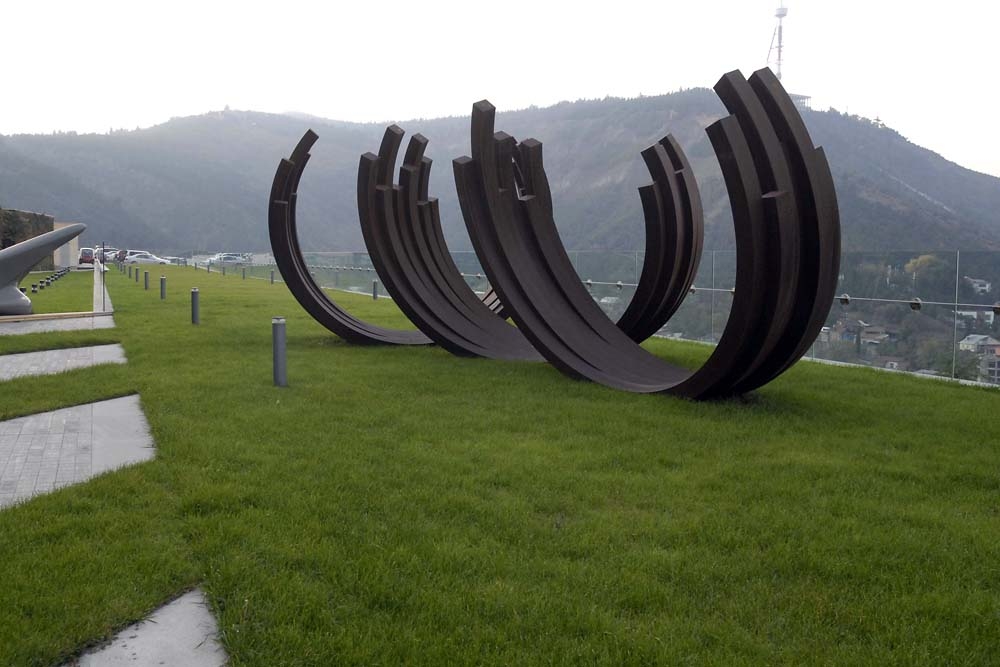 A collector of primarily modern art, Ivanishvili plans to build a world-class art museum in Tbilisi. 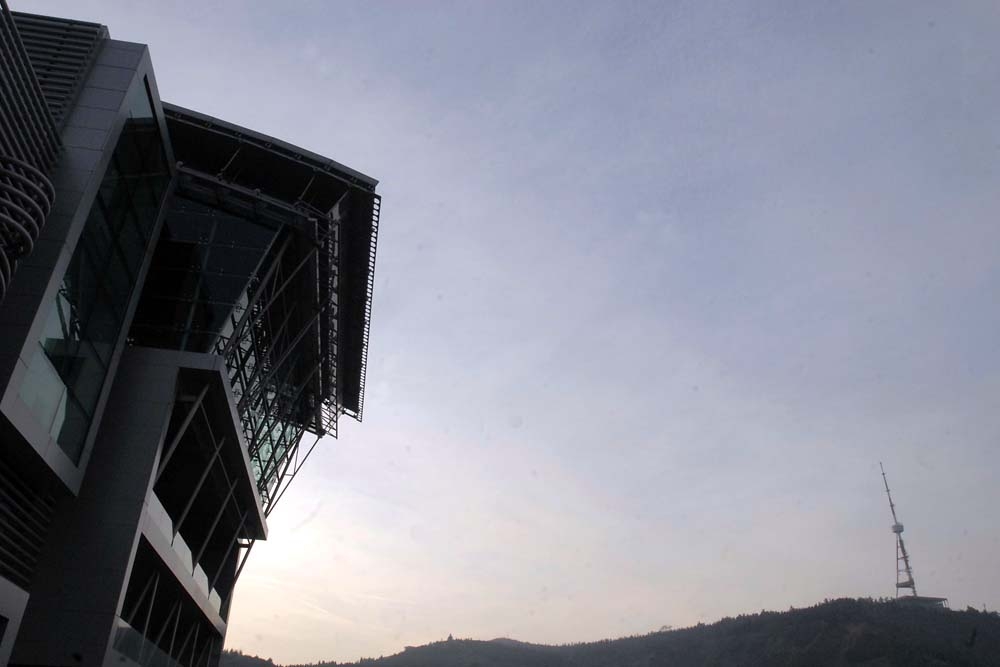 The billionaire's plans to open a public museum are on hold now that he has joined the opposition against the president. 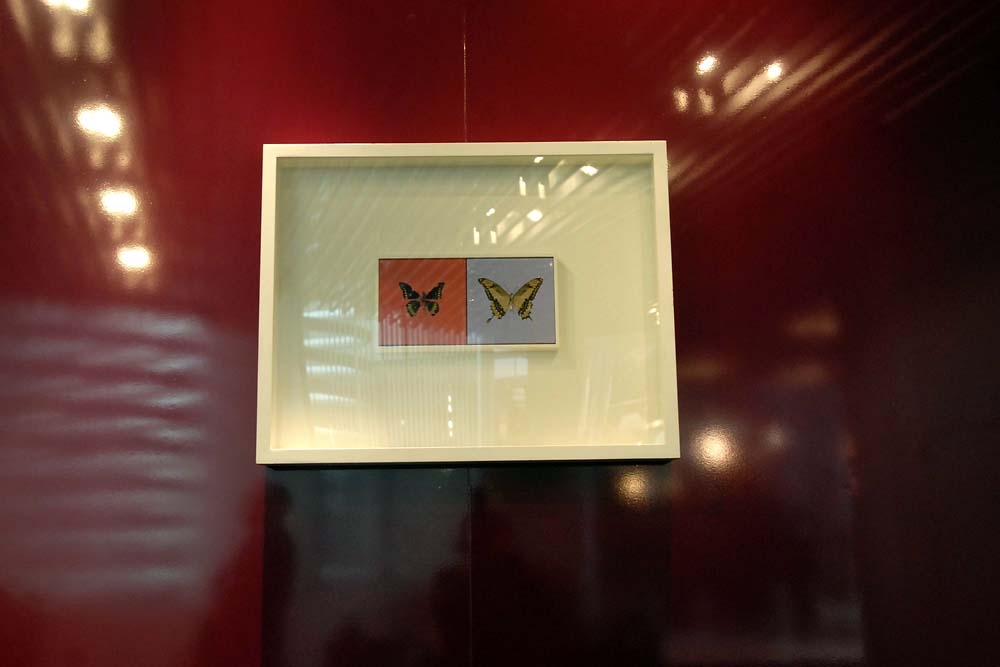 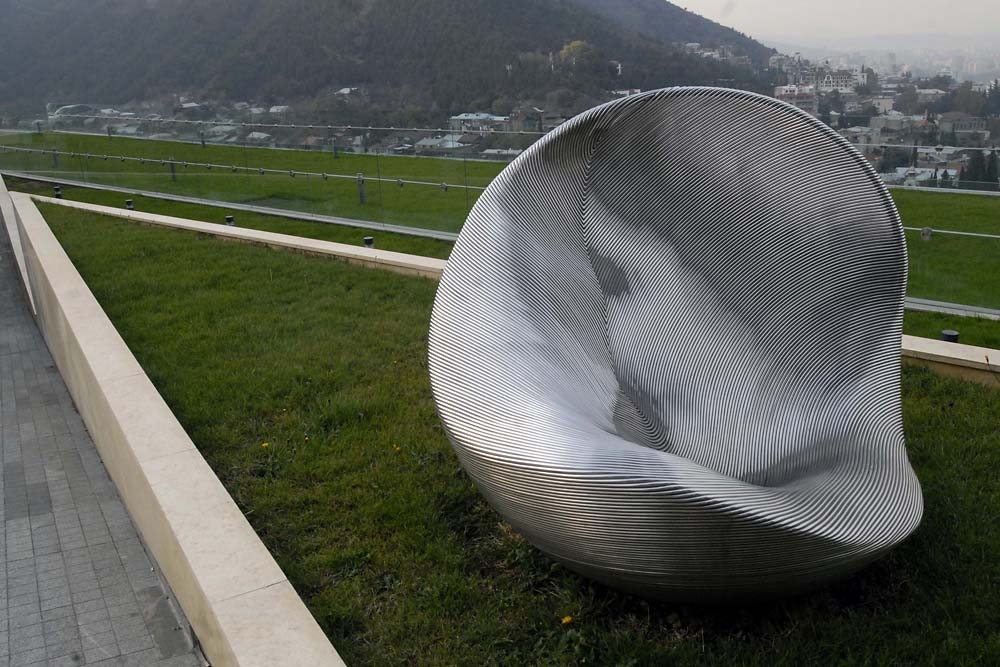 Ivanishvili plans on investing "hundreds of millions" of dollars in the museum project. 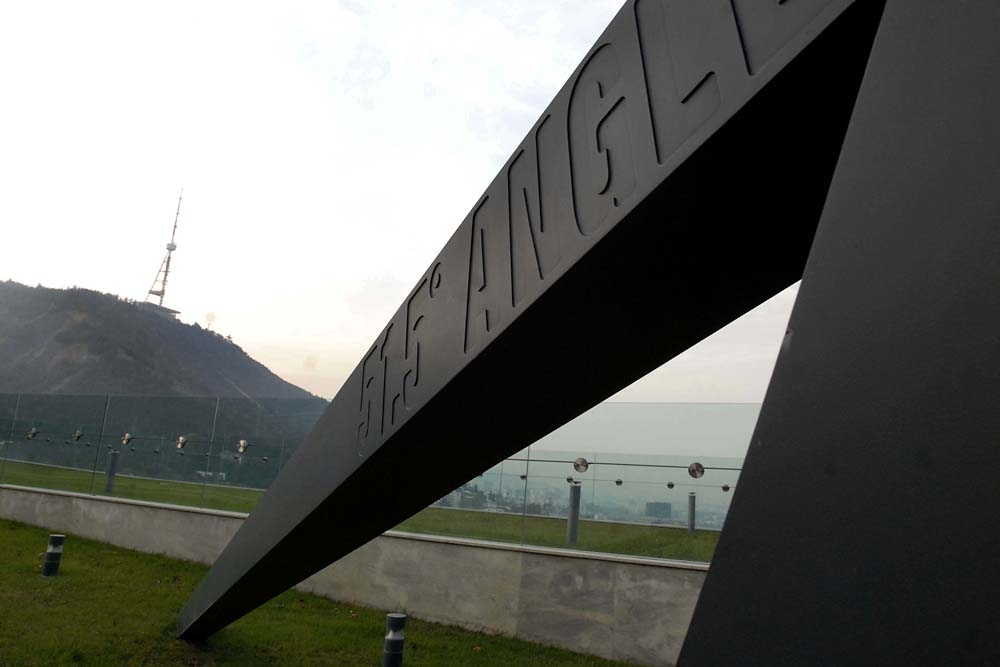 A “large” plot of land for the museum, next to Tbilisi’s Georgian National Art Museum, has already been purchased. 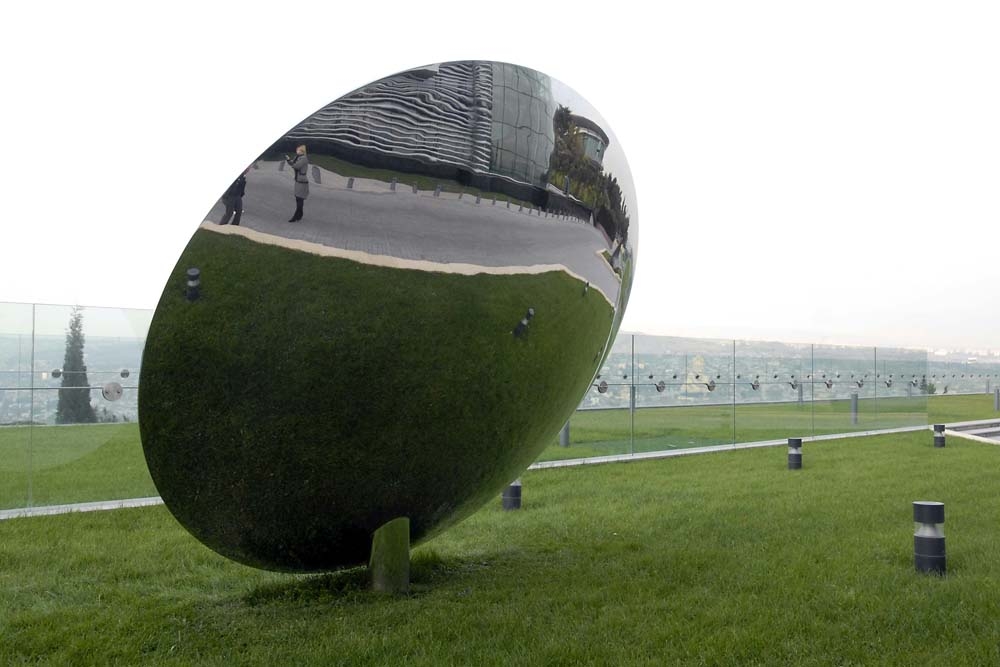 Most of the international pieces are kept at his hillside Tbilisi business-center-cum-residence. 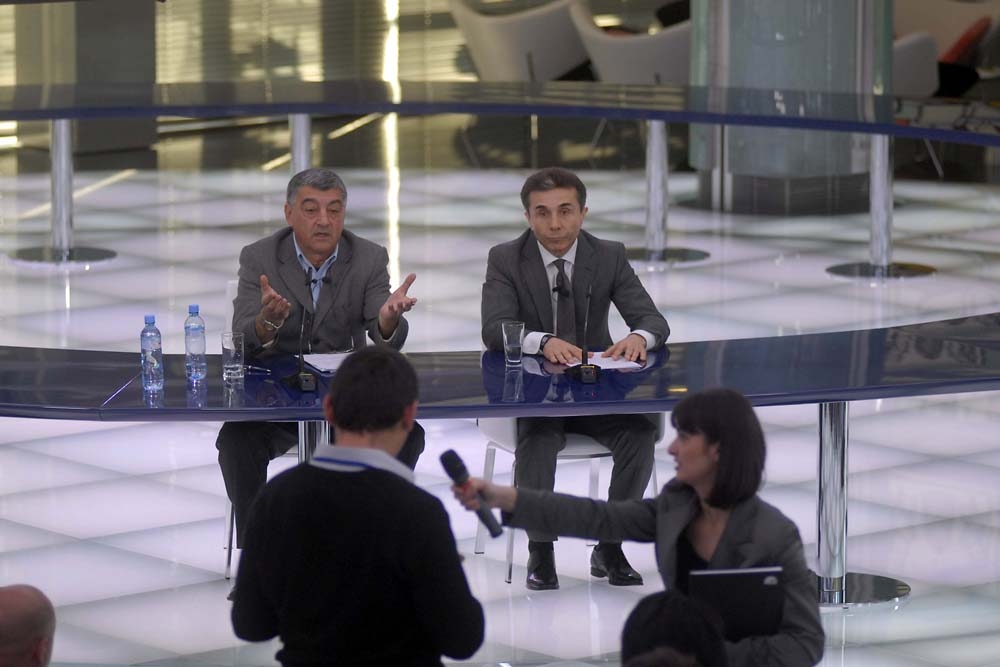 Ivanishvili (right) meets journalists during his first news conference on Nov. 1 to talk about his foray into Georgian politics. 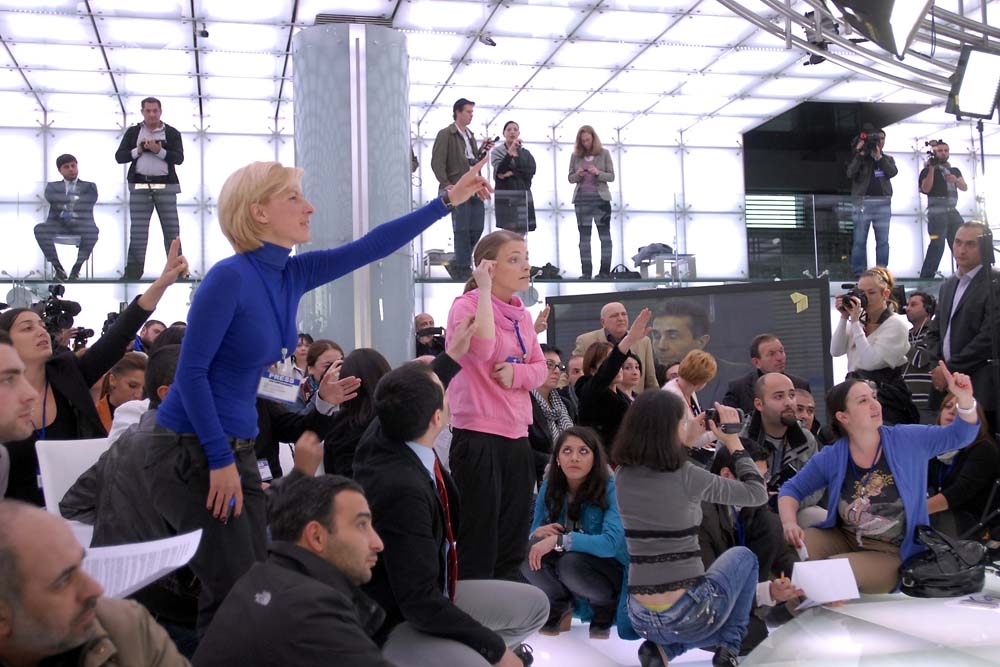 Journalists struggle for attention, asking questions during the conference at his Tbilisi residence. 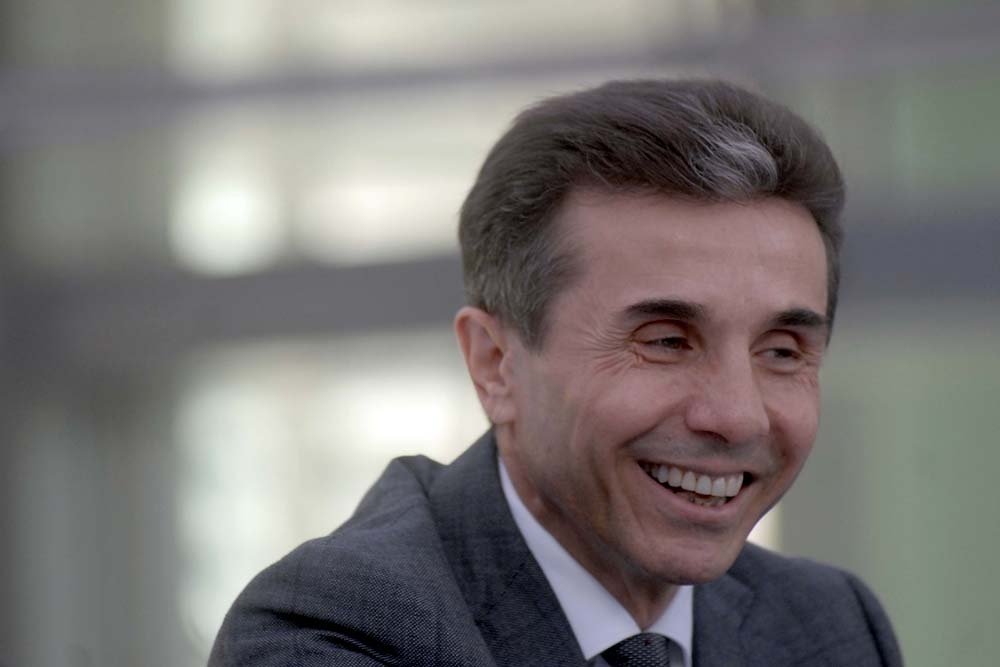 One of the world’s richest men, Ivanishvili’s political ambitions have caused a media sensation in Georgia.
prev
next

Much like his entry into Georgian politics this past October, insiders unceremoniously mocked Georgian billionaire Bidzina Ivanishvili when he made his initial foray into the highbrow world of international modern art some five years ago. Today nobody’s laughing.

One of the world’s richest men, and the latest in a line of moguls who have tangled with Georgian President Mikheil Saakashvili, Ivanishvili’s political ambitions have caused a media sensation in Georgia and stirred interest abroad. His talent for creating buzz in the art world is less explored, but, for those following his political trajectory, his artistic proclivities are every bit as noteworthy. In both cases, tenacity appears to be a major influence.

In 2006, when Ivanishvili acquired Pablo Picasso’s 1941 painting Dora Maar au Chat for $95 million, art critics largely derided the purchase as another instance of a Russian billionaire overpaying for prestige, without understanding the art work itself. One year later, his $11.3 million purchase of Scottish painter Peter Doig’s “White Canoe,” ranked as the highest price ever paid for a work by a living European artist, had sent market prices for modern art into the stratosphere.

According to Ivanishvili, who made his $5.5 billion fortune in the Russian banking and metals industries, such headline-grabbing purchases were part of a calculated business strategy -- opening a world-class art museum in the Georgian capital, Tbilisi, that can do battle with New York City’s Solomon R. Guggenheim museum and other prominent modern art centers.

"This all started because I thought about what I can do for the country, for tourism, to rejuvenate Georgia," Ivanishvili said during an interview with EurasiaNet.org. Some “one, two, three hundred million” dollars have been set aside for the museum’s collection, he continued.

Impressionist works – a field favored by his wife, Eka – that he could afford to buy “would not be interesting for European tourists,” he continued, while, with less money, modern art can make Georgia stand more easily apart.

But realizing this goal could prove easier said than done. Aside from a fight over the recent loss of his Georgian citizenship, Ivanishvili also faces the government’s recent seizure of $2 million and 2 million euros from his Cartu Bank as part of a money-laundering investigation.

A “large” plot of land for the museum, next to Tbilisi’s Georgian National Art Museum, has already been purchased. Ivanishvili declined to discuss likely construction costs for the facility – an architect has not been chosen – but estimated that the museum building itself would be “the least expensive” part of the project.

Today, the Doig piece, a saturated and dreamy landscape in dark greens and reds set off by a ghostly white canoe, is just one example of Ivanishvili’s sprawling modern art collection, a kaleidoscope that ranges from American jack-of-all-arts Jeff Koons to an oval, gold-colored mirror disk by British sculptor Anish Kapoor and a bright depiction of chairs and couches by American pop artist Roy Lichtenstein.

Most of the international pieces are kept at his hillside Tbilisi business-center-cum-residence, a dizzying mixture of straight lines and radical curves in metal and glass designed by the Japanese architect Shin Takamatsu. Georgian art is kept at his primary residence, in the village of Chorvila in central Georgia.

"With modern art, it is hard to understand where the art form begins and where it ends. I also have trouble understanding that,” he said, describing himself as a well-informed amateur. Choosing a favorite artist is a toss-up: “Maybe Damien Hirst, maybe Jeff Koons; there are many.”

At first glance, it might seem a strange interest for Ivanishvili, the soft-spoken son of a poor farmer. He is known for staying in the shadows, whether during his career in Russia’s turbulent banking sector or amid his many acts of charity in Georgia.

But Ivanishvili has long been a patron of the arts. His Cartu Group charitable organization has funded major makeovers for Tbilisi’s concert and opera hall. He has also quietly bankrolled theater directors, poets and other dignitaries of the Georgian art world since he returned to Georgia from Russia nearly a decade ago.

“[O]f course, the museum and this topic have moved to the background. I don’t have time for it right now,” Ivanishvili said with a shrug. “[But] what I started, I won’t leave. I will definitely [finish the museum].”