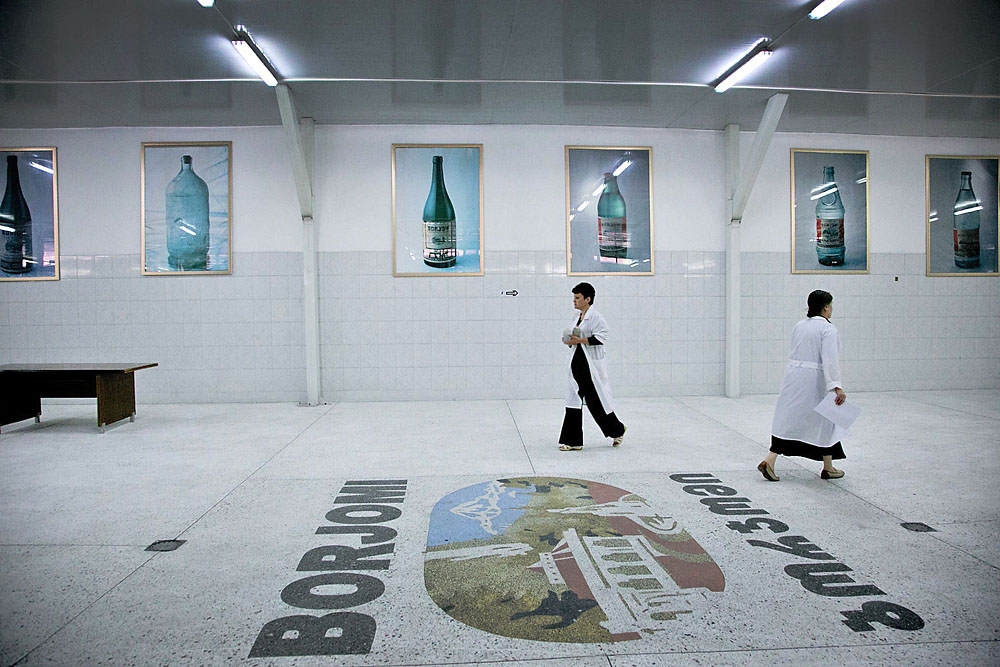 A history of Borjomi bottles is displayed in the entrance hall of Borjomi Bottling Factory # 2. 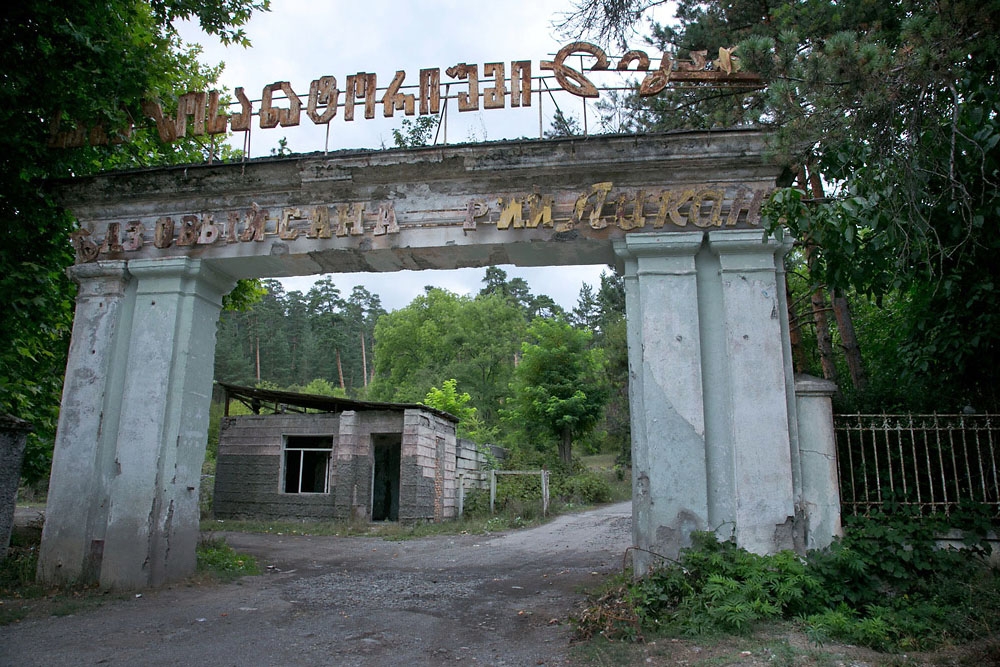 Once the biggest sanatorium in the Borjomi region, Likani has fallen into disrepair and is now used as housing for IDPs. 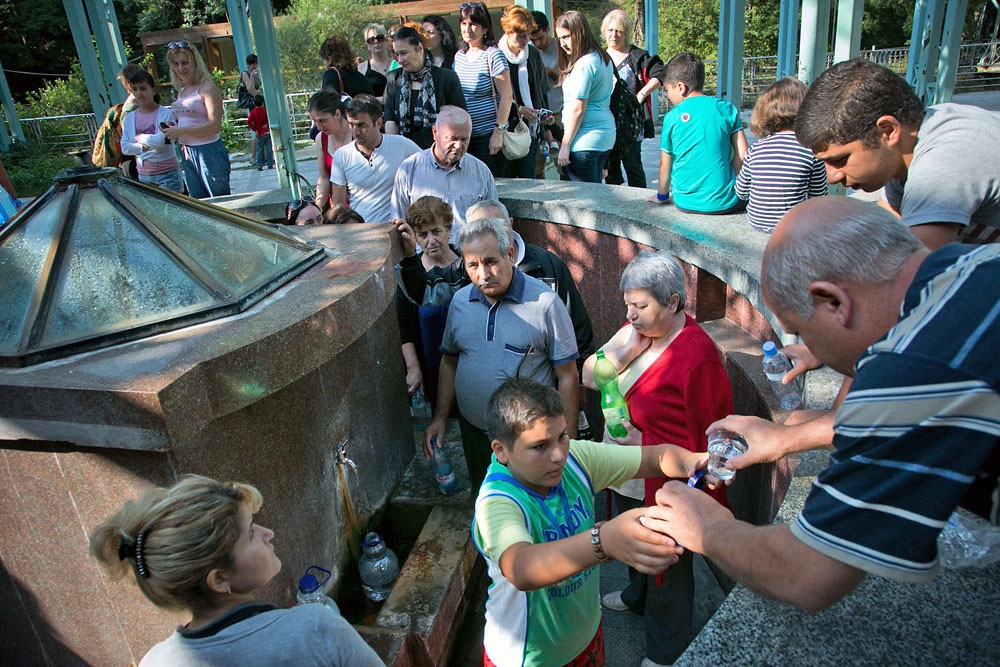 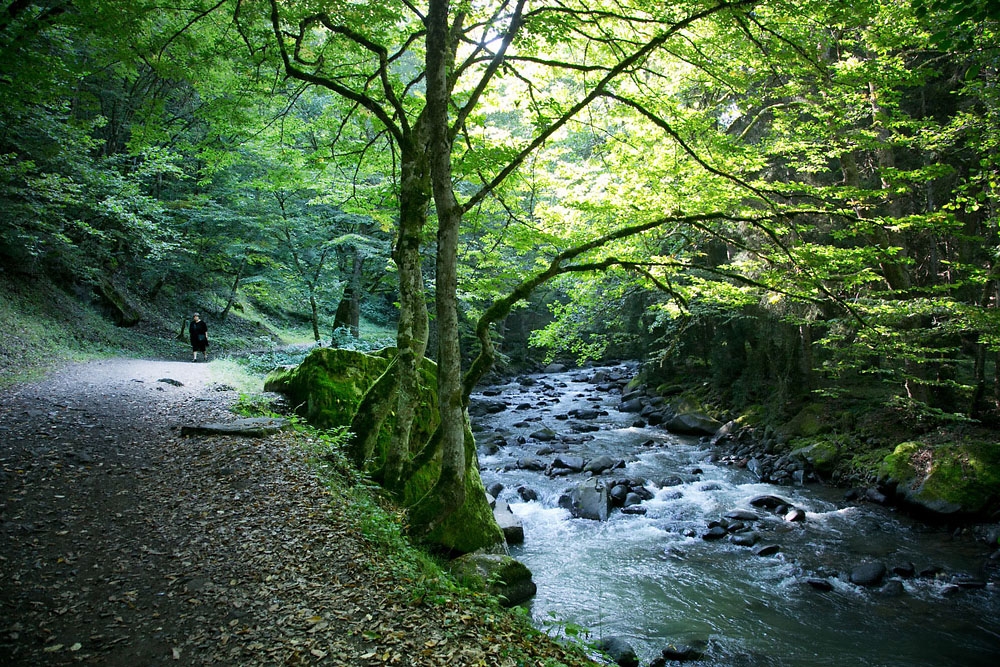 The world-renowned Borjomi water originates in the mountains of the Borjomi-Kharagauli National Park. 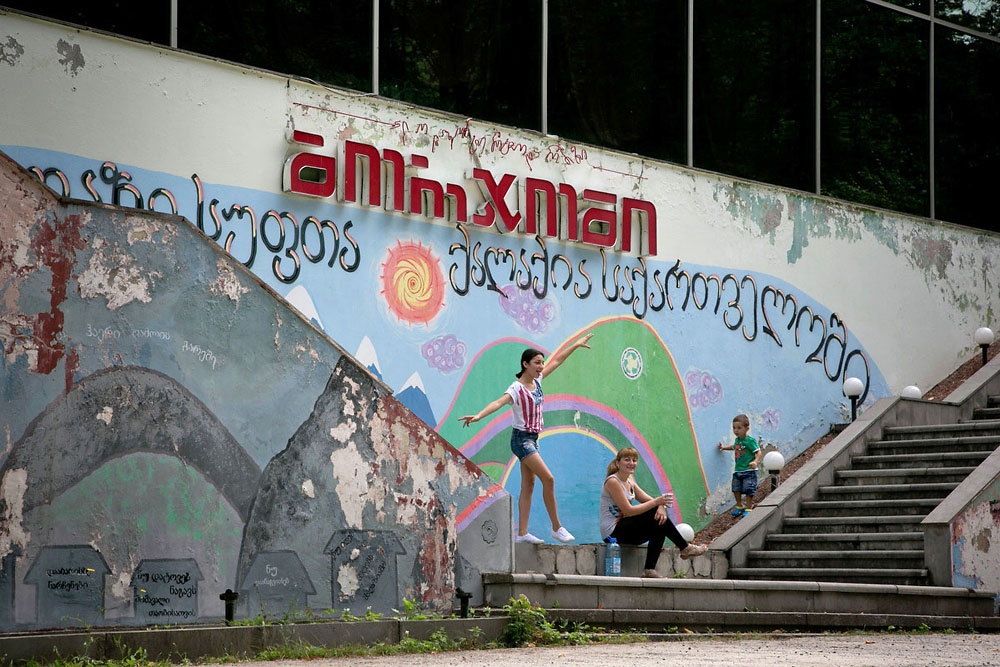 Many Georgian families visit the region of Borjomi, which is one of the country's prime destination for respiratory treatments. 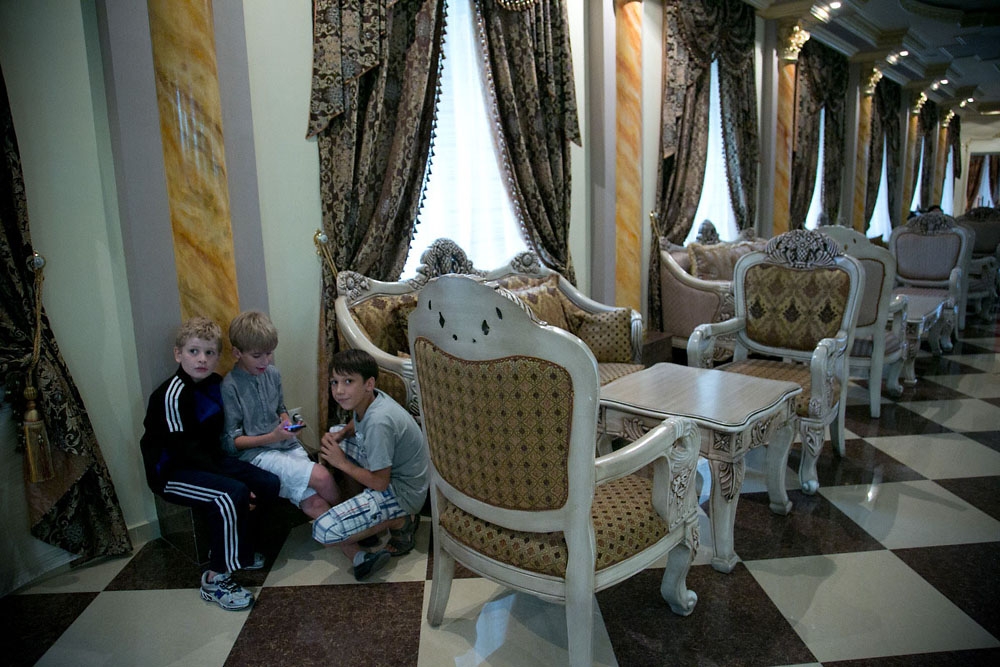 The Borjomi Palace is a new hotel spa providing treatments similar to those offered in Soviet-era sanatoriums. 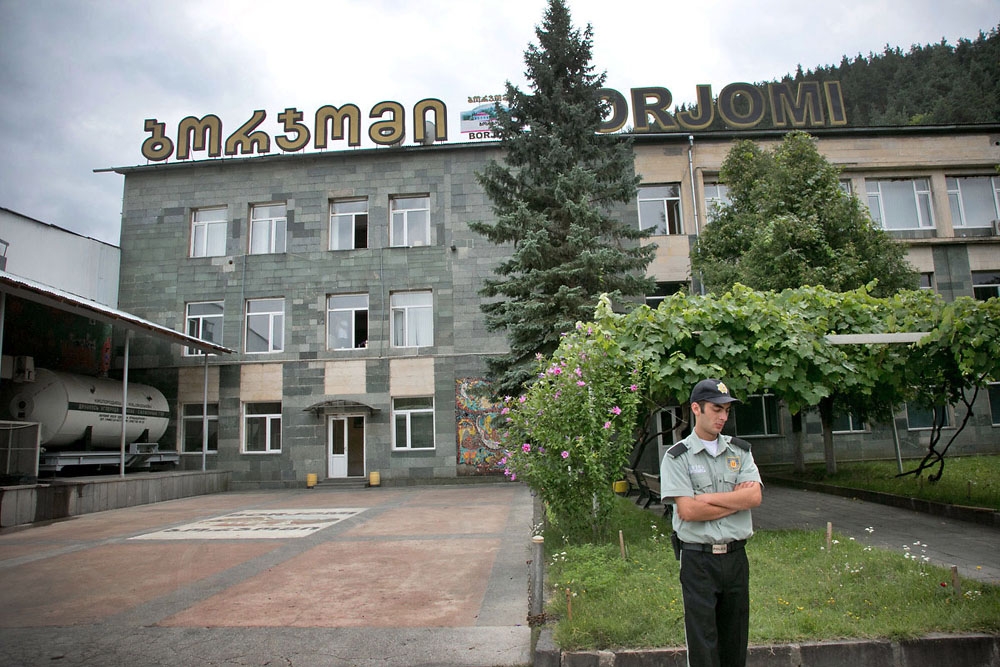 A guard patrols a Borjomi bottling factory, where trains and trucks pick up the water for domestic and international delivery. 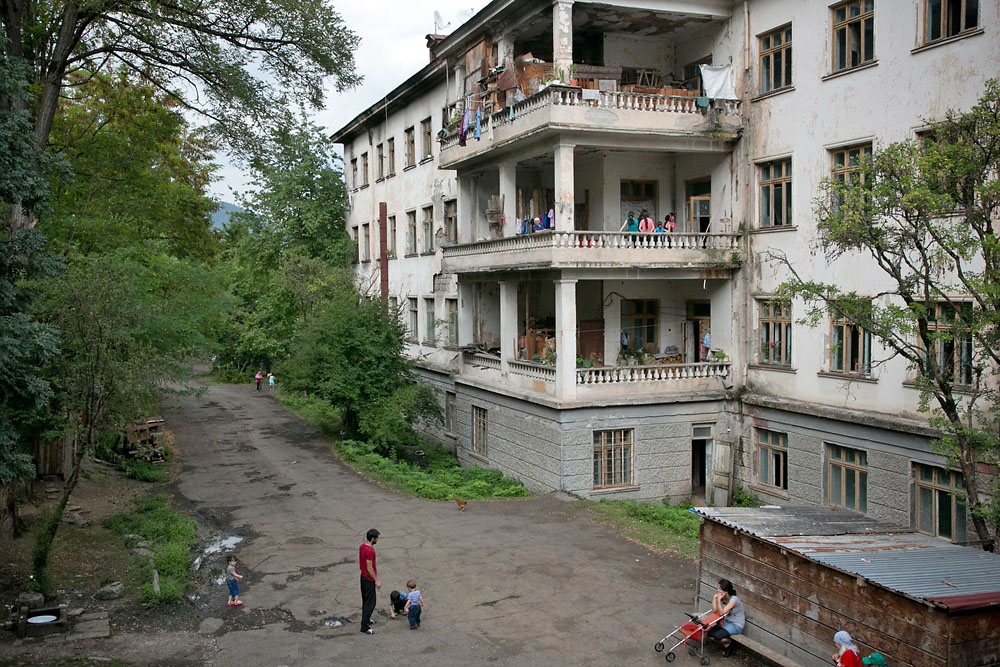 The former Likani sanatorium is now inhabited by Georgian IDPs from the various conflicts in the 1990s. 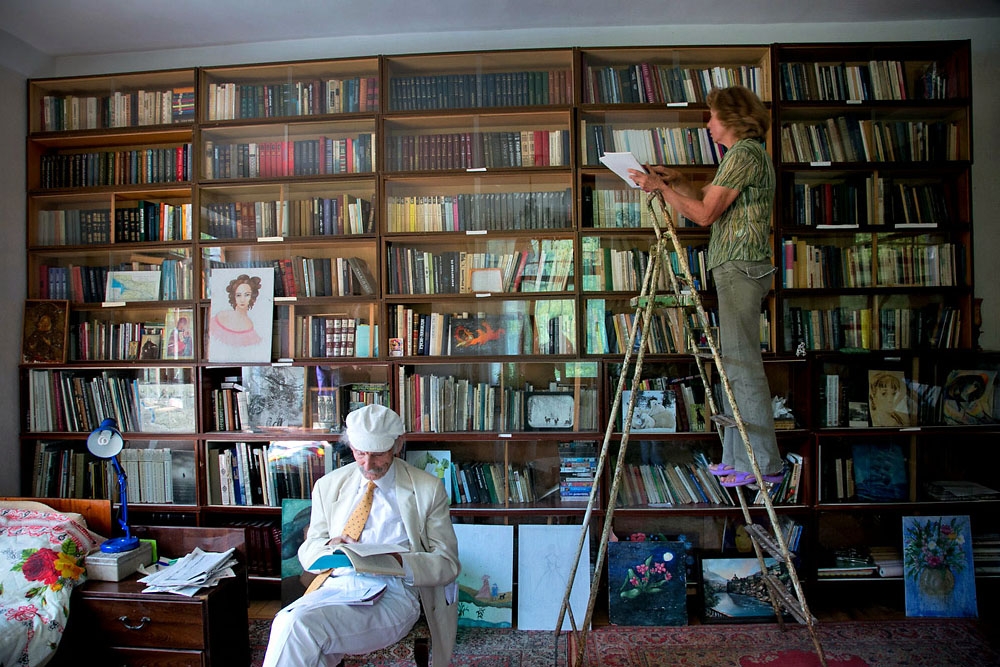 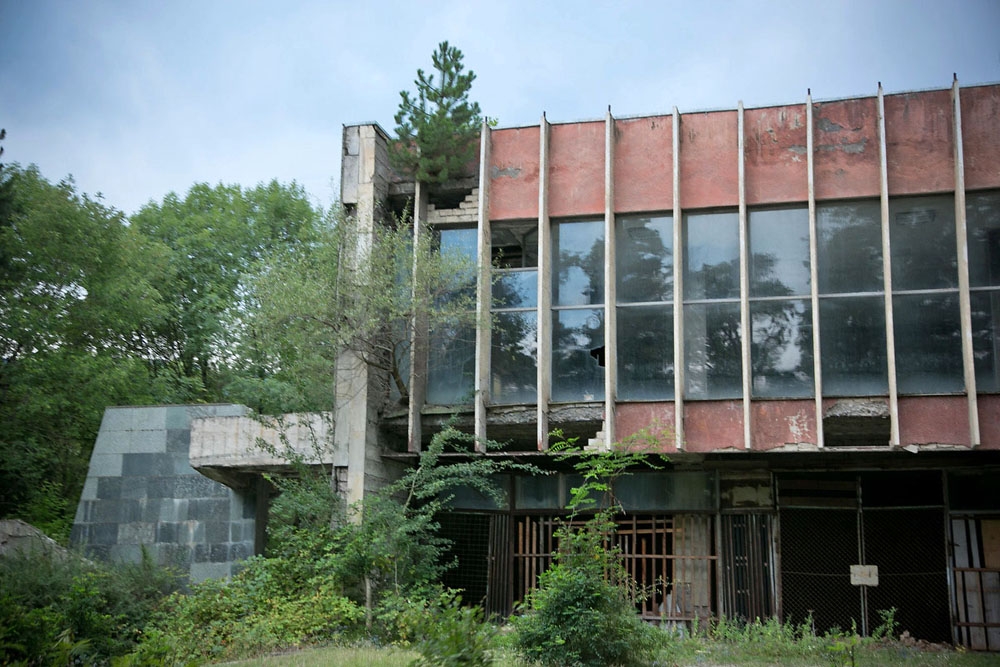 Trees and bushes are slowly taking over the abandoned culture club in a former sanatorium in Borjomi. 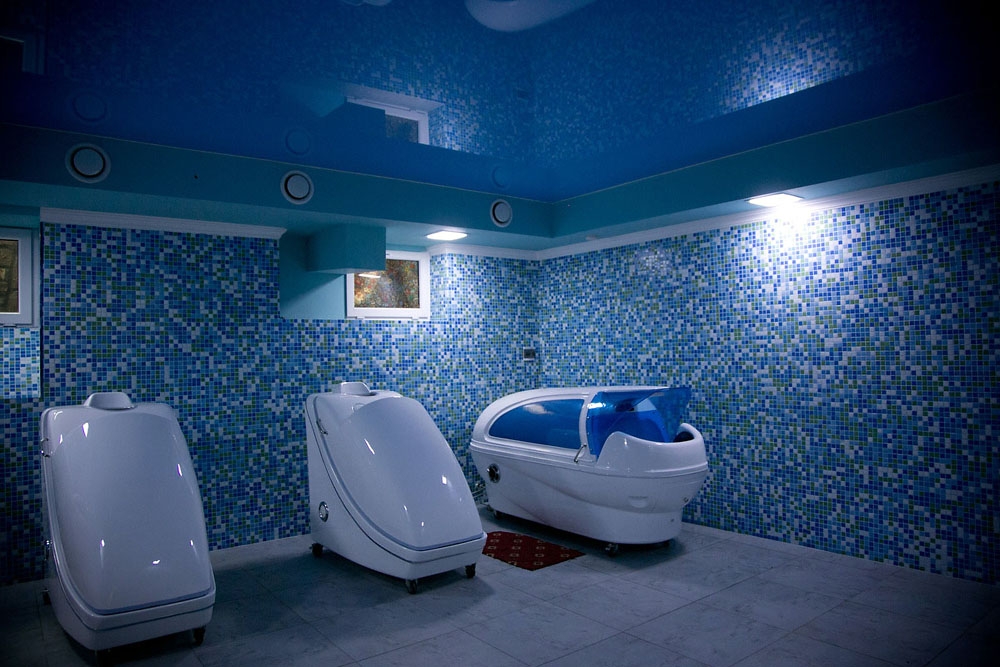 The Borjomi Palace hotel spa is one of the few new places offering medical procedures along with accommodations.

Borjomi residents return home with fresh water they gathered at a small spring by the railway tracks. 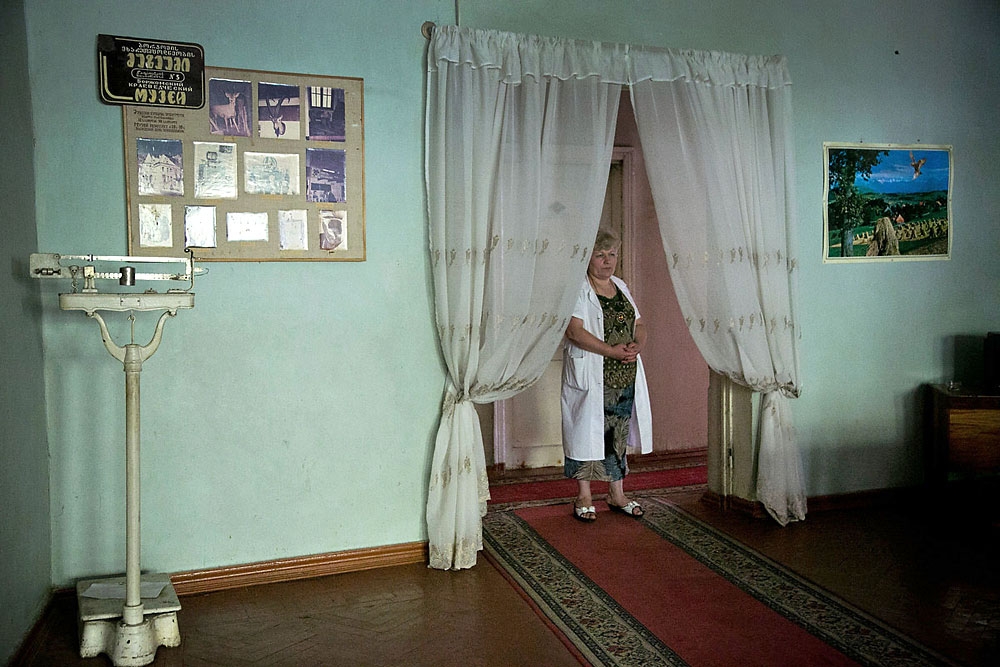 The Firuza sanatorium, in the center of Borjomi, is the only operational sanatorium left almost untouched from the Soviet era. 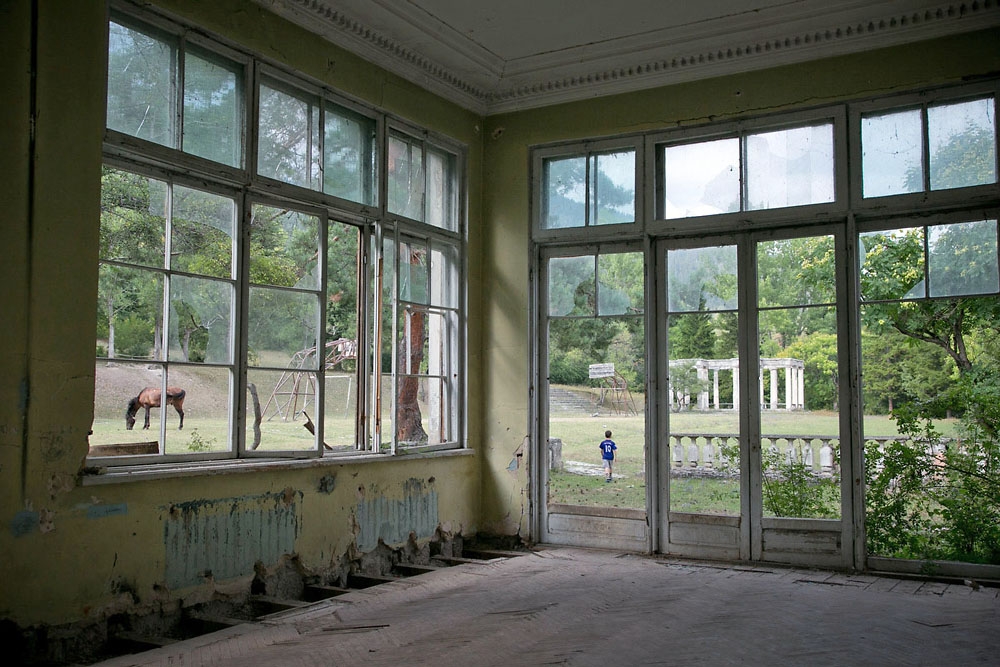 At the height of its popularity, the Soviet-era Likani sanatorium could accommodate 2,000 guests. 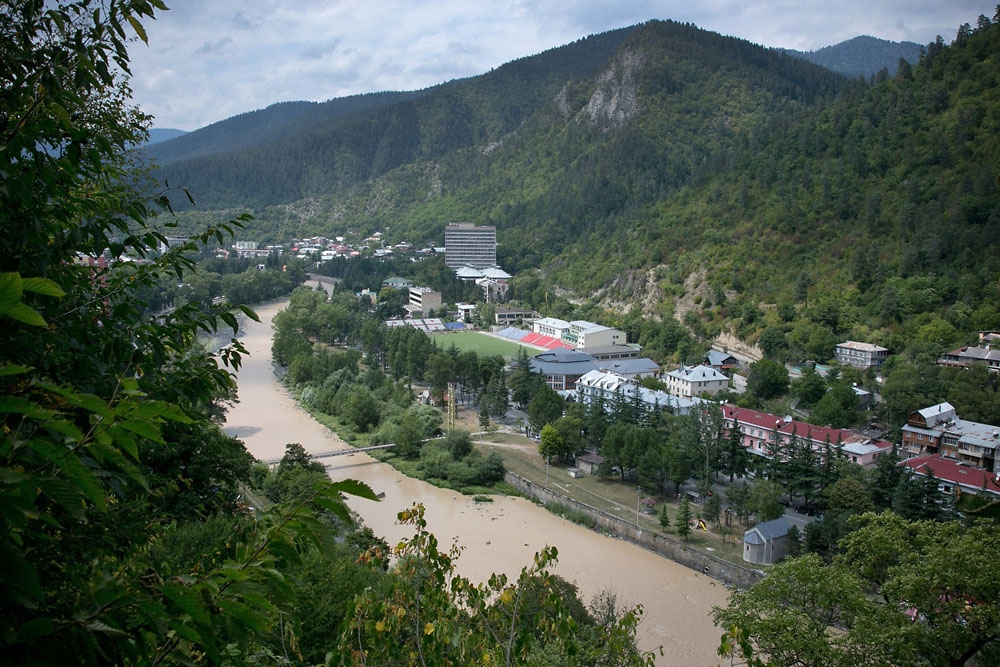 The Mktvari River curves through the city and the Lesser Caucasus Mountains along the bottom of the Borjomi Gorge. 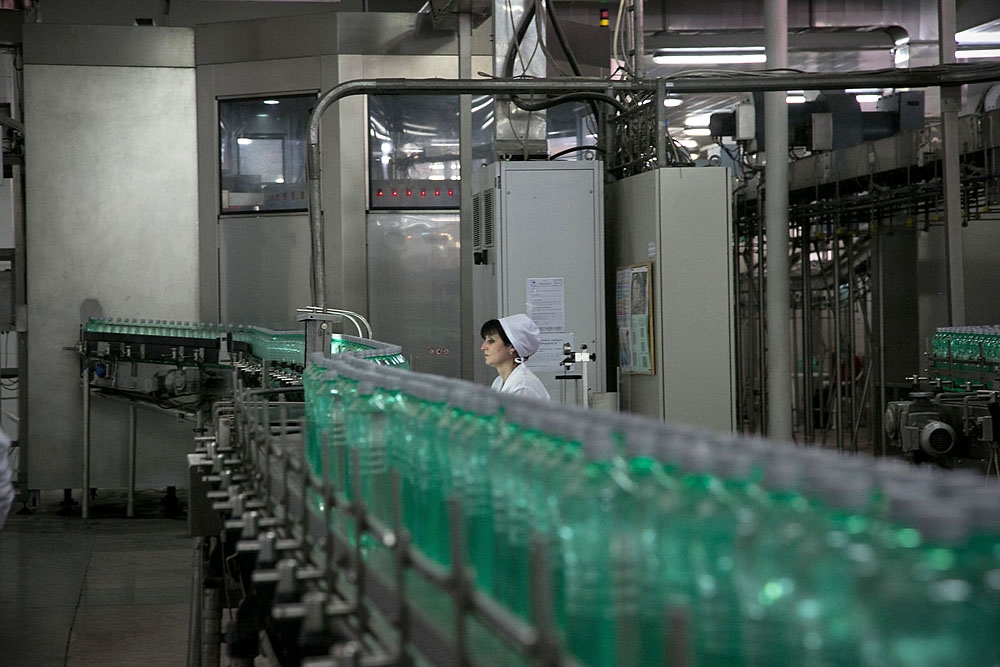 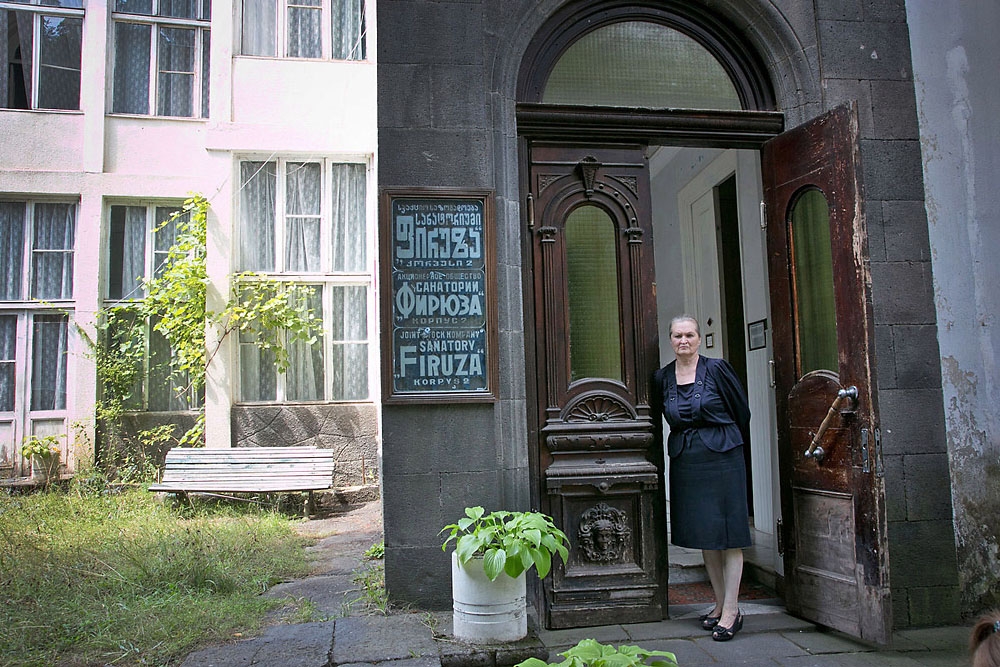 Galina Chitiashvili has worked at the Firuza sanatorium for 33 years. 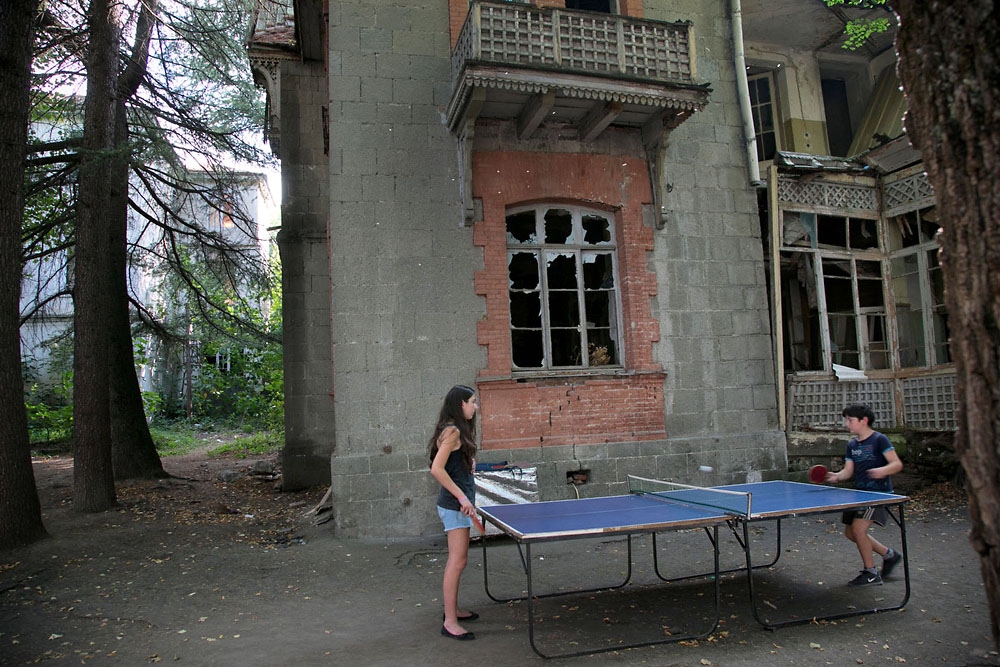 Children play table tennis outside a decaying former medical clinic in the center of Borjomi. 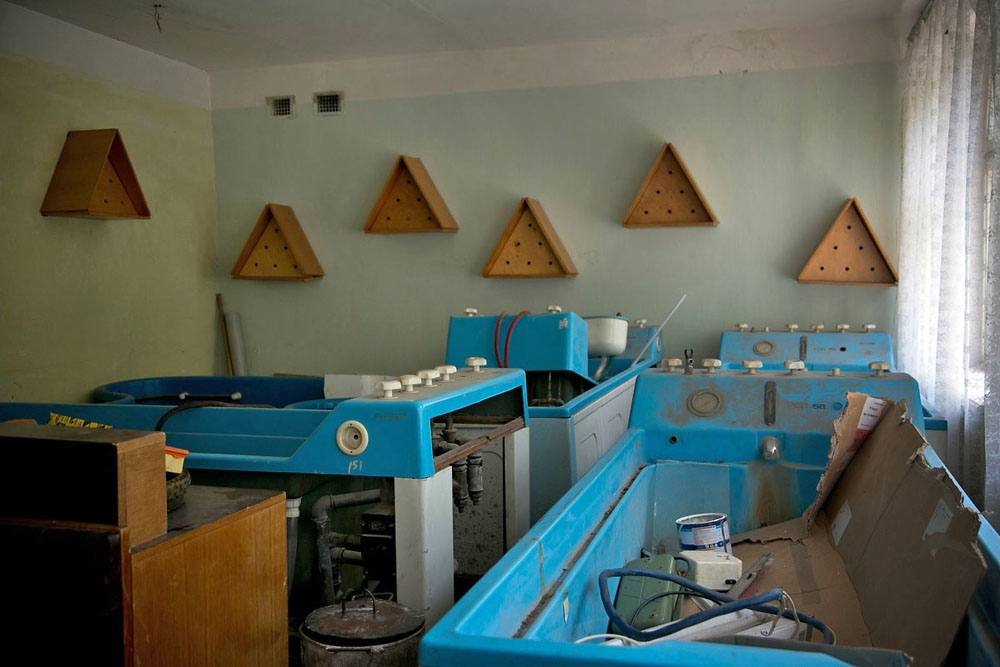 Old bath tubs used for medical treatments with Borjomi water and mud are stored away in a closed sanatorium. 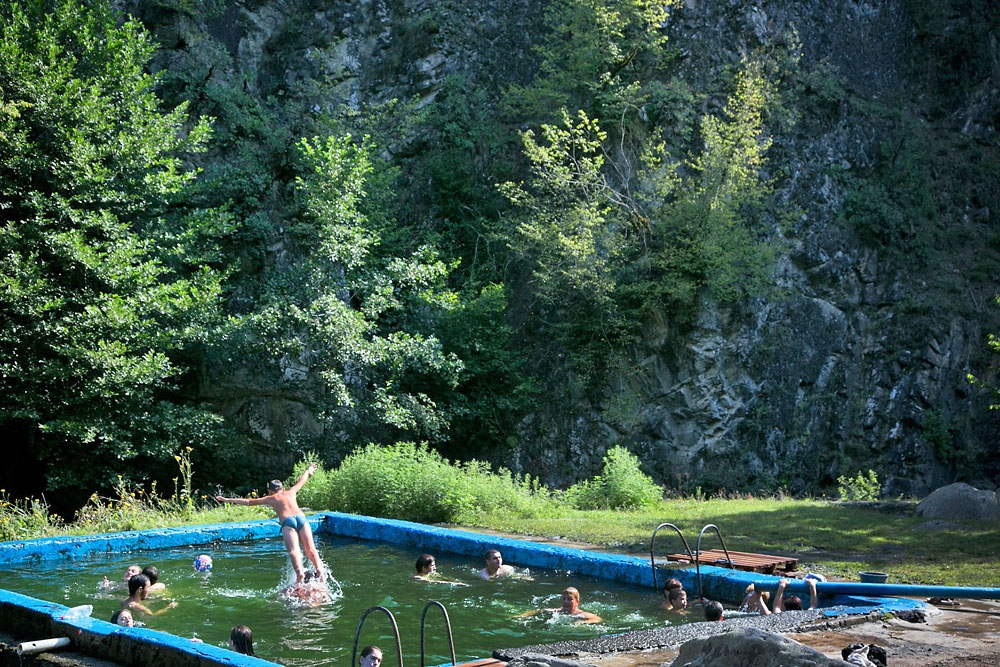 Visitors to Borjomi bathe in a pool filled with natural sulfur water in the city's central historic park.
prev
next

In 1972, legend has it, Russian film director Andrei Tarkovsky insisted on featuring bottles of Borjomi mineral water in his science-fiction classic Solaris to emphasize that the beverage, a Soviet cultural icon, would exist far into the future. He was right.

Borjomi, the beverage, has indeed outlived the Soviet Union. But the eponymous town of 16,000 is down at the heels. Even after Moscow this spring scrapped a seven-year embargo and allowed the salty drink back into Russia, once Borjomi’s largest market, few signs exist of an improvement in the fortunes of the sleepy mountain hamlet itself.

Renowned for its sanatoria that specialized in treatment of obesity, diabetes and gastronomic disorders, Borjomi once was a prominent Soviet-era vacation destination. During its heydey in the 1980s, the town, located about 155 kilometers west of the Georgian capital, Tbilisi, contained nine major sanatoria, catering to thousands of patients, locals recall. Today, most of those sanatoria are closed or serve as ruined residences for hundreds of internally displaced persons (IDPs) from the separatist-controlled territories of Abkhazia and South Ossetia.

But the memories linger on. “Borjomi was a Soviet city. People came from all over the Union, and developed true friendships, [while] dining and dancing together,” recollected Roman Mchedliashvili, director of the 81-year-old Firuza Sanatorium, one of the few spas still functioning.

Borjomi first became a tourism hotspot during the Tsarist era: a few health-conscious members of the Romanov dynasty elite even built summer residences in and around the town. Grand Duke Mikhail Romanov, a former viceroy of the Caucasus, in 1894 built the town’s first bottling factory, which operated until the 1950s.

In Soviet times, all the town’s sanatoria featured the fizzy, sulfuric Borjomi waters in their treatments. The Borjomi Palace Hotel today still offers a special recipe of Borjomi and mud as part of its $150 spa treatments. “Cleaning the organism is tantamount to cleaning the world,” advised 89-year-old Dr. Emanuel Dvalishvili, a former chief physician at the now-shuttered Likani Sanitorium, and the inventor of a device for gastric cleansing with Borjomi.

These days, the world no longer rushes in for such clean-out sessions. “We get a few Russian patients, but most are from the Caucasus,” the Firuza Sanatorium’s Mchedliashvili said.

Officially, the town’s unemployment stands at 15 percent, according to 2012 figures cited by news weekly Liberali, though unofficial estimates soar to over 50 percent.

What work there is depends largely on the brand name and fortunes of IDS Borjomi Georgia, the majority-Kazakh-owned company that produces and distributes the fabled mineral water. With roughly 400 local employees, Borjomi is the town’s largest private employer. Nino Mikeladze, an assistant to IDS Borjomi Georgia Executive Director Zaza Kikvadze claims that town residents are excited about the resumption of mineral water exports to Russia since it could mean more jobs on assembly lines.

But IDS Borjomi Georgia Chief Executive Officer Jacques Fleury asserts that all is not rosy for the beverage company. While the Russian embargo prompted Borjomi to diversify its exports to 40 countries, a new Georgian mineral-water tax of 6 to 7 percent of total sales, introduced after the Russian embargo was lifted, will adversely impact Borjomi’s financial health, Fleury claims.

Critics have denounced the tax as revenue fleecing. Government representatives could not be reached for comment.

Beyond the tax issue, many residents are skeptical that Borjomi’s revived sales to Russia will make much of a difference for local economy. Comebacks have been predicted before. In 2005, for example, the Georgian government bid to host the 2012 Winter Olympic Games in Borjomi and the neighboring ski resort town of Bakuriani. The town received only a new government administration building out of the campaign.

In April last year, President Mikheil Saakashvili visited Borjomi and, again, emphasized a revival. He predicted that restoration work on the town would eventually bring in so many tourists that locals would not be able to fill all the job openings.

While two renovated hotels -- the Borjomi Kheoba and Borjomi Palace -- attract steady business, two new luxury hotels, the Georgian-Russian-owned Borjomi Park Hotel and the Turkish-owned Rixos, remain unfinished. Meanwhile, a lack of basic infrastructure irks locals. “We get one hour of water a day,” asserted Ciala Guguciani, an IDP from Abkhazia who has lived for the past 20 years in the former Likani Sanatorium #2 with 80 other families.

Some attribute Borjomi’s woes to Georgia’s recent change in government. Many projects across the country were put on hold after President Saakashvili’s United National Movement lost control of parliament in last October’s elections. Borjomi Palace Hotel Executive Director Shalva Alaverdashvili believes that Borjomi could have become yet another presidential pet project for tourism development if not for the election results. “Borjomi was just next in line and, then, [poof]!” he said.

A few people believe changes to Borjomi will occur after Georgia’s presidential election this October, when President Saakashvili and Prime Minister Bidzina Ivanishvili’s awkward co-existence will end. But IDS Borjomi Georgia’s Mikeladze takes a skeptical view on the matter of state-proffered assistance. “Nothing has changed much since the end of the Soviet period,” Mikeladze said.