A Kremlin embargo on tourism to Georgia has struck a blow to the rapidly growing industry and exacerbated tensions between the two countries. 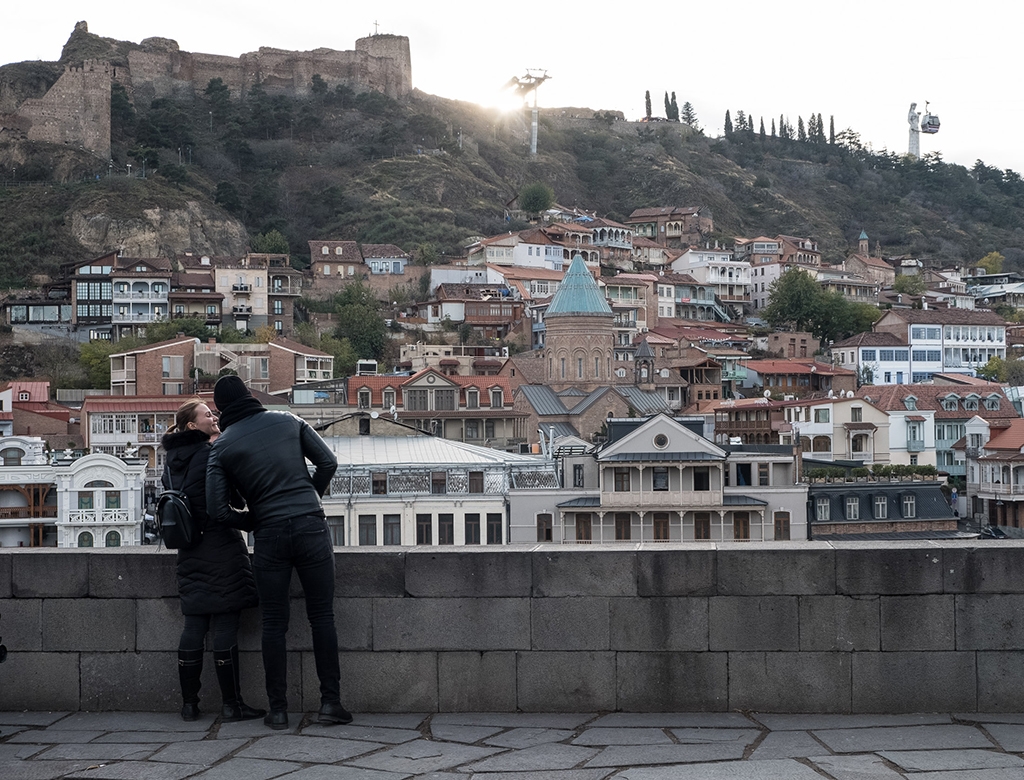 Tbilisi (all photos by Joe Harrison)

The Russian ban on flights to Georgia had barely been announced when Ketino Nizharadze felt a buzz on her phone. It was a message from a Russian family that was supposed to spend all of July and part of August in her rental apartment in the Georgian city of Batumi, on the Black Sea. They were canceling their reservation.

“They gave no explanation, only said that all people are brothers no matter what,” said Nizharadze, an elementary school teacher. Unaware that the Kremlin had suspended flights and asked Russian tourists to leave Georgia, Nizharadze felt “almost betrayed.”

“This couple has been staying at my place every summer for three years. Our kids played together,” she said. “They knew that I declined all other guests and reserved my place for them, so to cancel at the last minute and without any explanation seemed like a nasty thing to do.”

Two hundred miles away on the same day, June 21, in the Georgian capital Tbilisi, British-Georgian citizen William Dunbar was having dinner with friends when he heard the news about the flight ban. “I thought to myself, ‘well, classic Putin,’ but then in like 15 minutes, my phone went ding-ding-ding,” he said. It was a series of cancellation messages from Airbnb. Russians who had booked Dunbar’s rental apartment in Tbilisi were canceling one after another. “All the way through September, everything canceled,” said Dunbar, a sometimes Eurasianet contributor.

Tour guide Shorena Sharikadze was leading a group of Ukrainian tourists in Georgia’s top mountain destination of Svaneti when she learned that most of the tours she had booked for July and August had been canceled. “I mainly work with Russian or Russian-speaking tourists and summer is the prime season for mountain tours. Now I only have two tours left: a group of Belarusians in July and Kazakhs in August,” Sharikadze said. She lost about $2,500 overnight, she said.

She said that not only Russians but some Russian-speaking visitors from other former Soviet republics also dropped out. “Many of them follow Russian news and Russian news is claiming that there are anti-Russian riots here and that there is violence, so they are afraid,” Sharikadze said.

Kremlin spokesperson Dmitry Peskov has described the ongoing protests in Tbilisi as “Russophobic hysteria.” The demonstrations were sparked by the appearance of Russian lawmakers in the Georgian parliament on June 20. Protesters were outraged to see a Russian lawmaker occupying the seat of the speaker of the Georgian parliament at the same time that Russian troops continue to occupy breakaway Abkhazia and South Ossetia. Russian President Vladimir Putin responded by suspending flights and telling Russians to leave Georgia by July 8. Russian news outlets have been mongering fear about the events, painting a dramatic picture of Russians facing hate in Georgia.

For all the territorial tensions between the two countries, Russians increasingly choose to vacation in Georgia and have even accounted for the majority of foreign visits to Georgia this year, with some 540,000 arrivals through May, according to data from the Department of Tourism. The number was 1.4 million last year and was expected to grow to 2 million by the end of this year.

In the days following the embargo Wehost, a Tbilisi-based Airbnb property management company, saw a spike in cancelations from Russia. “Some 40 percent of our prospective guests were Russian,” said Nika Anjaparidze, manager of Wehost. “Of course, it is going to hurt our company and also the homeowners,” he said.

At the higher end of the hospitality business, Rooms Hotels and Stamba Hotel, a small chain of premiere hotels known for their hipster chic designs, also felt the squeeze. “Yes, we have experienced a few last-minute cancellations, but we continue receiving reservations from Russia in spite of the flight restrictions imposed by the Russian government,” said Valeri Chekheria, CEO of Adjara Group, which owns Rooms Hotels and other landmark Georgian establishments like Fabrika, a multifunctional urban space in Tbilisi.

Chekheria said he believes many Russians will continue visiting Georgia and his hotels regardless of Moscow’s policies. His company also has taken precautions not to be overly dependent on any single country. “Given the unstable relations between our countries, which we have witnessed more than once, we tried not to depend too much on the Russian market” and also have catered to the American, European and Middle Eastern markets, he said.

Smaller hotels, homeowners and tour companies are likely to bear the brunt of the tourism war. In seaside towns like Batumi, renting out homes in summer is the main source of income for many, if not most residents. “We get a pittance for a salary at the school – 500 lari [about $180] a month,” said Nizharadze. “So all the teachers, everyone I know rents out in summer to make ends meet. […] I borrowed to renovate my apartment – changed the plumbing and the wallpaper – and was planning to pay off my debt with the rent and now I get this ‘gift’ from Putin.”

The looming hardship, however, also forged solidarity. Many Georgians used social media to call on their foreign friends to spend this summer in Georgia. “My dear friends, please plan your vacation in Georgia this summer,” internationally renowned Georgian mezzo-soprano, Anita Rachvelishvili, wrote on her Facebook page. “Georgia needs support! Come and visit Georgia!” A well-known Georgian footballer, Guram Kashia, who used to play for the Dutch club Vitesse, invited his fans and friends to visit Georgia via Instagram. “Dutch friends: go to Georgia to finally see a proper mountain (even though I love your flat country),” he wrote. 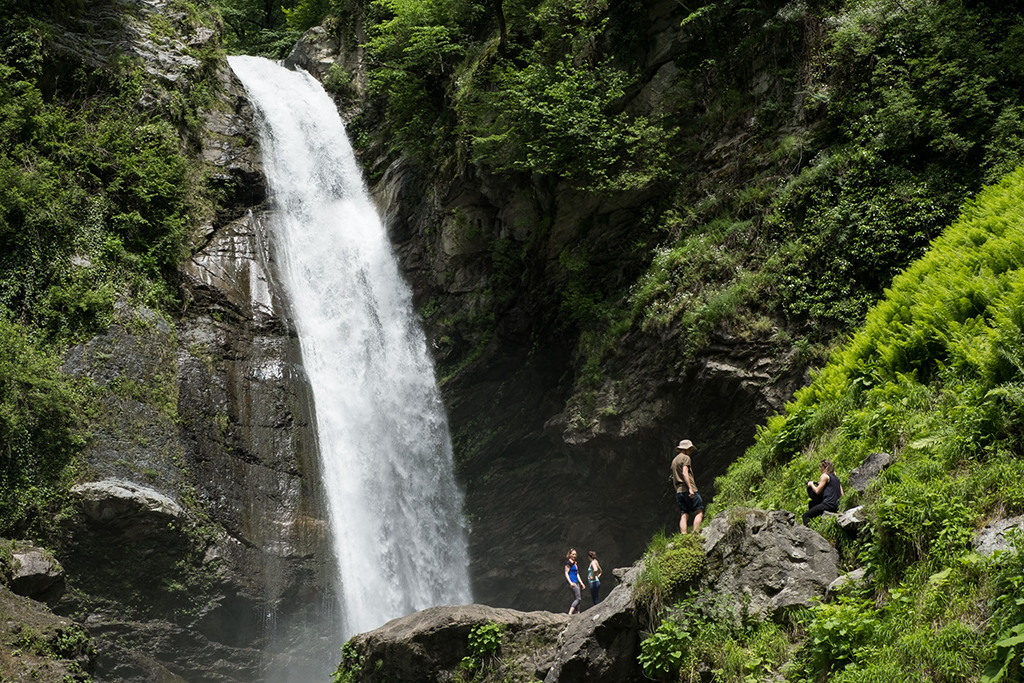 Foreign diplomats, including the Lithuanian and British ambassadors, also called on people to visit Georgia and supported a social media campaign under the hashtag #SpendSummerInGeorgia. The Georgian Orthodox Church called on its parishioners to spend their summer vacations in Georgia and asked the banking industry to ease conditions for borrowers to help the struggling tourism business. Prominent banker Mamuka Khazaradze promised to cover the cost of 10 flights from Ukraine to Georgia.

For some employed in the tourism business, the ongoing tension with Russia took not just an economic but also a personal toll. Tour guide Sharikadze said she spent hours arguing over the phone with a former guest-turned-friend from Russia. “She called me that night and was saying things like ‘why are you being rude to Russia? Why did you kick out that Russian member of parliament?’ and I said why did you kick out Georgians from their homes?” she said. “My husband was telling me to calm down and hang up, but I could not. Until that point I had always tried not to talk politics with her and she did the same, so now that we did I see that we are worlds apart.”