Georgia: Brunch in a time of plague

After some early success in fighting COVID, Georgia let down its guard. Then I did, too. 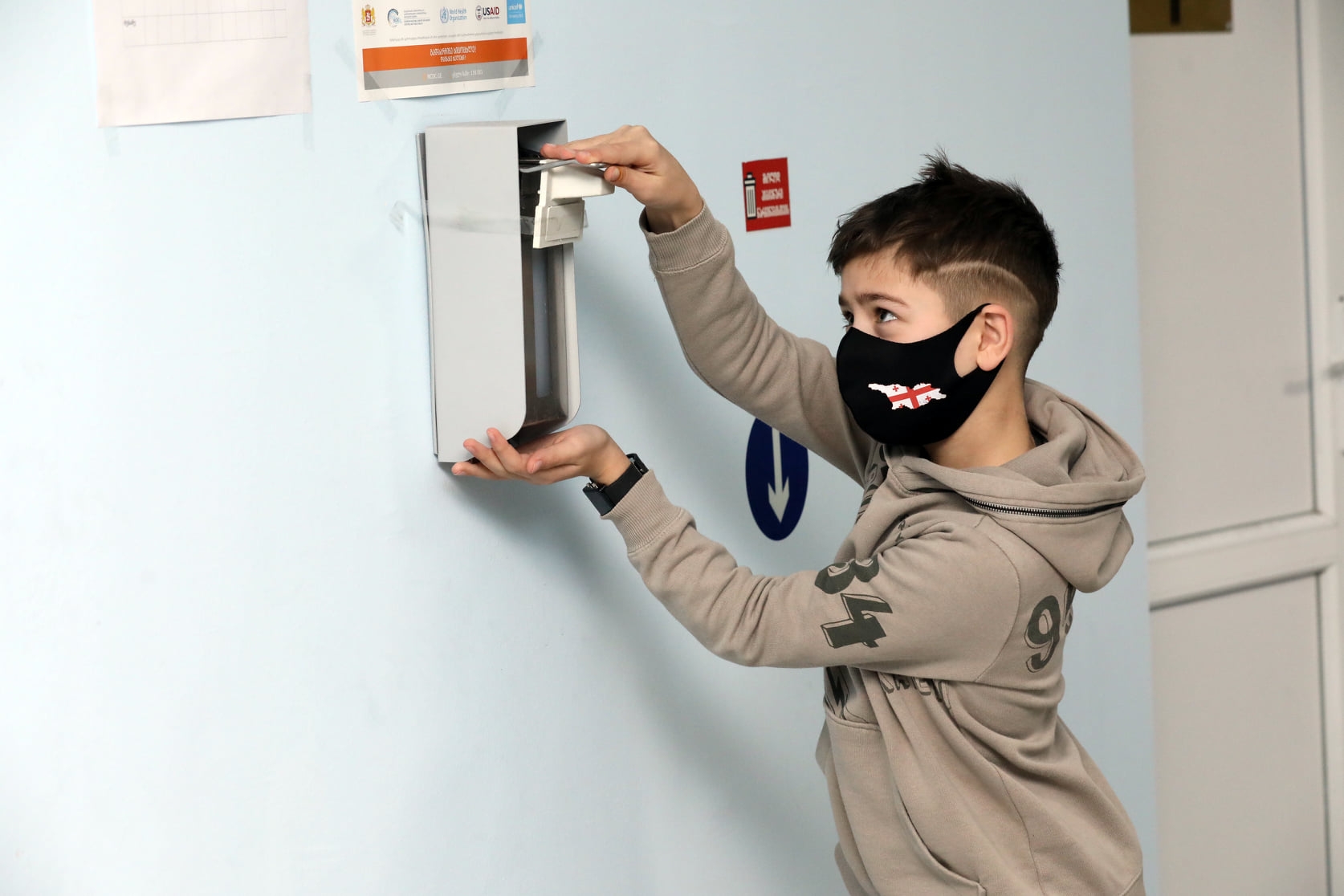 We Georgians have gotten tired of postponing our lives because of the pandemic. At least that’s my justification for not cancelling that brunch in my garden on Sunday, April 25.

Earlier that week, I had heard from a friend that she had come down with COVID-19 and may have passed it on to me. I broke the news to my prospective guests, but the fatigue with many false COVID alarms, starvation for human contact and the glorious weather all spoke in favor of proceeding with the brunch. So did my PCR test, which came back negative on Sunday morning.

Still, we all knew that tests can miss a brewing infection, so some of my friends chose to cancel. Three decided to come anyway.

Only one of them, an American, had been vaccinated. Because of the slow global rollout of the vaccines, Georgia at that point only had a tiny allotment, mostly reserved for the elderly and front-line healthcare workers. We were on the third wave of the infection, with more than 1,000 new cases every day in a country of about four million.

At the brunch, I tried to appropriately distance myself from everyone. It turned out to be a good day of fun, but the grilled pork knuckle and white wine were among the last things I have been able to smell or taste.

That night I woke up burning with a fever and decided I needed another test.

There are two ways that Georgians can manage their COVID-19 situations. Those with the means pay to get diagnosed on their own dime, often getting tested at home, and can get treated at higher-quality hospitals. Then there is everybody else, whose testing and treatment is paid for by the state. I’ve experienced bits of both worlds.

This time I went to get a rapid test – free for those who have been exposed or who have symptoms – at a Tbilisi clinic. The line outside recalled those for European shoes at Soviet department stores. I was there for four hours before a moody nurse drilled the stick into my nose. She later came outside and broadcast the results to the waiting crowd, like a medieval herald announcing royal decrees.

I was one of 1,577 people who tested positive across Georgia that day.

I was instructed to go home immediately, call Georgia’s equivalent of 911 and register myself as a COVID patient. Minutes after placing the call, my phone began ringing off the hook. All sort of government agencies were calling to ask me with whom I had been in contact recently, whether I wanted to move into a hotel that had been converted into a COVID-19 isolation facility, and if I needed emergency care. Then these agencies’ quality control services followed up with calls of their own. I was assigned a general practitioner, a government-provided physician who would manage my case.

The nation, in the meantime, was bracing for a potential superspreading event: Easter, which fell on May 2. Public health officials were begging the faithful not to gather in churches, a call that many believers ignored. Police set up cordons around cemeteries to prevent people from visiting their loved ones’ graves; it is a beloved Georgian tradition to gather for picnics or full-on supras (Georgian traditional feasts) at graveyards on the day after Easter.

These feasts “are our number one enemy now,” said Paata Imnadze, the deputy head of the National Center for Disease Control (NCDC).

The NCDC also sought to enlist the influential Georgian Orthodox Church to help convince people to get vaccinated. Vaccine hesitancy has spread in Georgia after a nurse died from an apparent anaphylactic shock after she was inoculated at the very start of the nationwide campaign. The church demurred, though, and the government itself also came under criticism for delays in distributing vaccines: At this point it already had 100,000 doses of China’s Sinopharm shots on hand but was waiting on the World Health Organization to approve the vaccine.

The government-appointed doctor, a formidable, stern-spoken lady, called me reliably once a day, but our conversations were cursory: She was clearly stressed out from handling too many patients and sped through the checkup. I got more help from Facebook friends who had recovered from COVID-19 and could give useful tips like how to measure blood oxygen saturation using a mobile phone app.

Stuck at home alone, with only the company of an emotionally unavailable cockatiel, I amused myself with COVID-related banter on Facebook and found myself repeatedly watching a 1982 screen adaption of La Traviata. What better way of suffering though a respiratory disease than by watching the tragic story of a 19th-century tubercular beauty?

After all, this wasn’t actually my first round of COVID-related self-isolation.

The first was in February of last year, when few people were taking the coronavirus seriously. I fell ill a few days after flying home from Singapore, and then I wasn’t even deemed worthy of a test – I hadn’t been to China, and I didn’t have a high fever or a cough. But enough of my symptoms matched up with the new disease and I decided to isolate myself in my apartment for three weeks: I didn’t want to be the first spreader of the novel virus in my country.

Georgia’s actual confirmed patient zero arrived later, on February 26 last year, more prosaically on a minibus from neighboring Azerbaijan. In the months that followed Georgia became an international COVID success story, as it kept internal transmission at a minimum with stringent lockdowns and closed borders, while the virus was wreaking havoc throughout much of the rest of the world.

It all changed when the authorities let their guard down in summer, much like I did on the day of my brunch.

With a total of almost 340,000 confirmed cases in Georgia – mostly in Tbilisi – half of my friends and relatives already had COVID. Most of them were getting off relatively easy: The friend who apparently gave it to me got better in three days.

I wasn’t so lucky. The third night, my temperature hit 39.8 C (103.64 F). I called an ambulance, hoping they would administer an injectable fever reducer that could work faster than the paracetamol I had been taking. Waiting for the ambulance and with my temperature still climbing, I could think of no better home remedy than to stagger into the kitchen, take some ice out of the freezer and rub it all over myself, like a solo reenactment of “9 ½ Weeks.”

By the time the ambulance arrived 45 minutes later the fever had already dropped significantly, and they could offer me little more than an awkward conversation about interior design (“I like your wallpaper, the subtle, pastel tones”) and a bit of gaslighting (“COVID patients often have panic attacks. They think they have high temperature or something. It is perfectly normal.”).

The following day, April 28, my mother left a jar of chicken soup by my door.

My mother’s cooking is not for everyone, but on that day it seemed she had exceeded herself in creating something remarkably bland and tasteless. Adding a bouillon cube and salt into the greasy mixture made no difference. And only then did it dawn on me: I put some salt on the tip of my tongue and tasted nothing.

The Georgian COVID treatment protocol is to give patients blood tests and a CT scan of the lungs on the sixth or seventh day after the onset of symptoms. That phase in the disease is regarded as a key time to monitor for the signs of potential complications, such as blood clotting and pneumonia.

For me, though, this period coincided with the holidays that began on Good Friday and continued through the Monday after Easter, Georgia’s day of the dead, and hospitals had suspended offering these services.

As it happened, though, my COVID chose to stick to the church calendar: The fever began on Palm Sunday and broke on Easter. On Tuesday, May 4, I went to a clinic to get a blood test and found there another line of biblical proportions.

In the clinic’s courtyard, the lines for PCR tests and post-COVID tests merged into one socially undistanced mess. As I waited, a face with large glasses and a pointed, inquisitive noise sticking over a facemask materialized within breathing distance of me. “You had corona right? How was it?” the woman asked, continuing to press closer until I was backed into a wall. “You will infect her, she’s old, she’ll die, it’s going to be on you,” the voice in my head went. “Ma’am, you will find out yourself if you don’t stay away from me,” I actually said.

That was the day that vaccines finally became available to the general public. In spite of reports of low efficacy of the Chinese vaccines, the few thousand doses of Sinopharm shots in Tbilisi got snapped up in a matter of hours. Other Tbilisians headed out of town to get their jabs in farther-flung parts of the country, where vaccine enthusiasm is less evident.

A few days later, the government further opened eligibility for the vaccines. Demand was such that the sign-up website collapsed under the weight. As of this story’s publication, almost 17,000 people (0.5 percent of the population) in Georgia have been fully vaccinated. People have been posting photos of themselves getting shots both to promote vaccination, and perhaps also to celebrate the fact that they managed to finagle the jab.

Given the dearth of vaccines, the shots are not available for COVID patients like myself for four months after recovery. The assumption is that naturally acquired immunity will provide protection against reinfection for some time and priority should be given to people with no immunity whatsoever.

At least my blood test came back alright, except that it showed signs of malnutrition. Since everything tasted and smelled like Styrofoam, I could barely force myself to eat, was shedding weight fast and felt perpetually light-headed. When I asked my doctor about it she brushed me off and told me the sensory dysfunction would eventually go away on its own.

The better news: I learned that I was the last stop for the virus in my little cluster and nobody from my brunch got infected.

On May 6, my doctor called for the last time to announce the end of my quarantine. She forced a congratulatory tone, which was even more terrifying than her normal voice. I still chose to avoid human contact for a few extra days for good measure – isolating just-in-case has become my thing.

Once again, I turned to Facebook for entertainment. I logged on to joke about the bright side of having COVID: “Lost weight, have antibodies – updating my Tinder profile.”