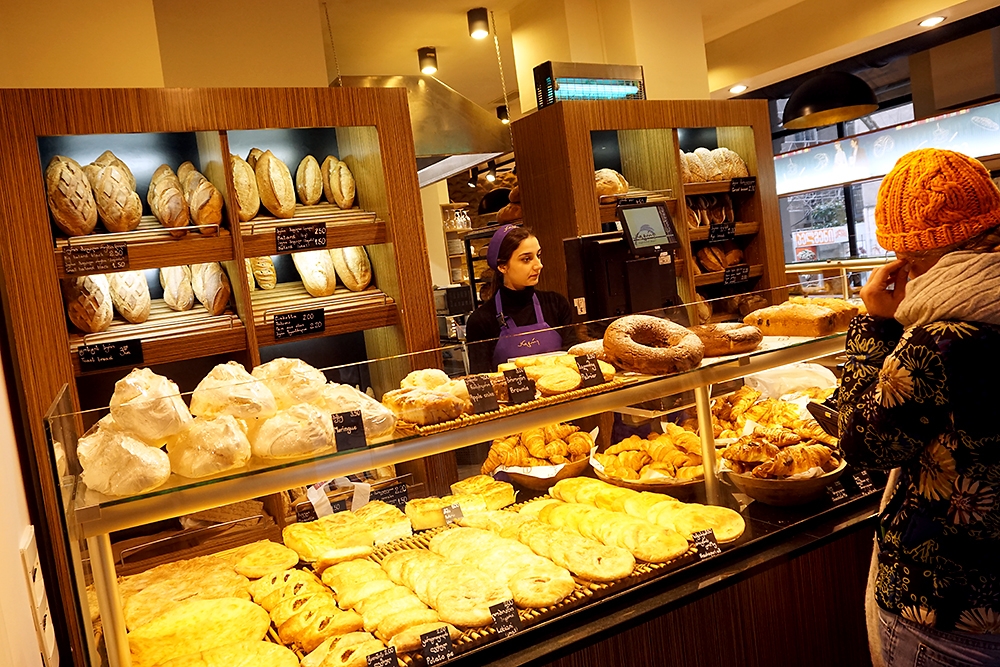 Boutique bakery Entrée opened its first store in Tbilisi in 2008. It now has a chain of 10 cafés in Tbilisi and three in Azerbaijan's capital, Baku. (Photo: Monica Ellena)

For Irma Nikoladze, a trip to the boutique bakery in her neighborhood in the Georgian capital, Tbilisi, has become a ritual.

“It is my bi-weekly treat,” said the 33-year-old bank clerk, pointing at a multi-grain loaf. “I grew up thinking that bread was just . . . shoti [a traditional Georgian-style, canoe-shaped, stone-baked loaf] and the [factory-made] baton, but when I traveled to Europe in 2005, I discovered there was so much more than that.”

Among those fortunate enough to be counted among Georgia’s middle class, the last few years have been defined in part by culinary exploration.

“Food habits are the first to adapt to higher purchasing power,” observed sociologist Emzar Jgerenaia, who heads the National Library’s Department of Science, Culture and Civil Education. “You make more money, you show you can buy more expensive food.”

In the past 24 years, millions in the former Soviet Union have moved into the middle class. Georgia is no exception. In 2013, about 40 percent of 3,105 respondents in a survey by the Caucasus Research Resource Centers identified themselves as middle class.

But this is a tricky concept in Georgia. Some experts define middle class by income; others by lifestyle. For still others, it is a state of mind relating to education, family background and social behavior.

Examined through the prism of hard cash, being middle class in Georgia does not necessarily imply prosperity. “If we take the whole population, rank them according to … income and take the middle 50 percent as a reference for the middle class, we see that in 2014, the monthly income per person ranged between $90 to $204,” said Nino Doghonadze, an economist at Tbilisi State University’s International School of Economics.

Under World Bank standards, Georgia’s middle class would drop to “only 10 percent” of Georgia’s 4.4 million inhabitants, according to Doghonadze. Most of these 10-percenters live in urban areas like the capital, Tbilisi, and mid-size regional cities of Kutaisi, Telavi, and Batumi.

The number may not be huge, but the cost of living can be low in Georgia because many adults in Georgia still live with their parents. Thus, young urban professionals have some disposable income.

“Purchasing a bread loaf that is three times more expensive than … shoti is a class statement,” explained sociologist Jgerenaia. Shoti costs 60 tetri, or 32 cents, while the all-grain favorite of bank clerk Nikoladze, who earns about 1,200 laris ($484) per month, costs 2.50 laris, or $1. “The shoti is an integral part of Georgian cuisine, but it is also specifically associated with the working class.”

Mamuka Aslamazishvili knows that well. The 31-year old Tbilisi resident has been a baker for half of his life and five years ago opened a small, typically Georgian tone (stone-oven) bakery in the city’s affluent Vake district. He said that “2015 was a good year,” as he wiped off sweat from his forehead in the hot, small area where he spends 12 hours a day. “There has been a lot of construction, so lots of workers would come to buy shoti. Otherwise, people in Vake prefer to buy more expensive French bread,” he added, smiling.

A few meters away, Entrée is buzzing with activity. Since it opened in 2008, the boulangerie chain has outgrown the expectations of French co-owner Jean-Michel Charles and his Georgian business partner, Evgeni Pichkaia. Today, it boasts a chain of 10 cafés in Tbilisi and three in Azerbaijan’s capital, Baku.

Fifty-eight-year-old Charles has been operating French bakeries in Eastern Europe since the mid-1980s, but the growth of the middle class in Georgia, as seen through demand for more varieties of bread, has been among the fastest he has experienced. The change does not only signal there is more money being spent, but also that the mentality about shopping has changed.

“It is about [a] status symbol in … daily life,” he explained. “People are aware [about] what is happening in the West, wanting to have that for themselves. [They are] better informed shoppers.”

Georgia’s 10-percenters may purchase European-style bread, splurge on a restaurant meal or a smartphone, but they remain vulnerable to external shocks, whether the loss of a job or a sharp currency devaluation, noted economist Doghonadze.

Georgia’s economy, like most others across Eurasia, is wobbly. Over roughly the past year, the Georgian lari lost over 40 percent of its value against the US dollar. In addition, Russia’s economic woes have had a ripple effect on Georgia, underscored by the fact that remittances sent home by Georgian labor migrants declined just over 25 percent in 2015, totaling $1.09 billion. In another alarming sign, National Bank data indicates that household debt is rising significantly.

Four years into his job as the bakery country-manager for Carrefour, one of the world’s largest hypermarket chains, with five retail outlets in Georgia, Frenchman Vivien Copere has noticed the downward trend since the end of 2014. When the chain opened in 2012, it offered 45 different types of bread. Today, it is down to 20.

“Overall revenues remained stable, but out of the 20 type[s] of bread we produced, customers increasingly buy more of the cheaper products, preferring the simple baguette over the more refined types like full rye or multi-cereals,” said Copere.

Although the immediate economic future for Georgia is full of uncertainty, Mamuka, the baker, who earns just 40 laris ($16.20) per day, is optimistic. A nearby house has just been sold to a real-estate developer. “Construction will start soon. Builders will buy my shoti,” he smiled.