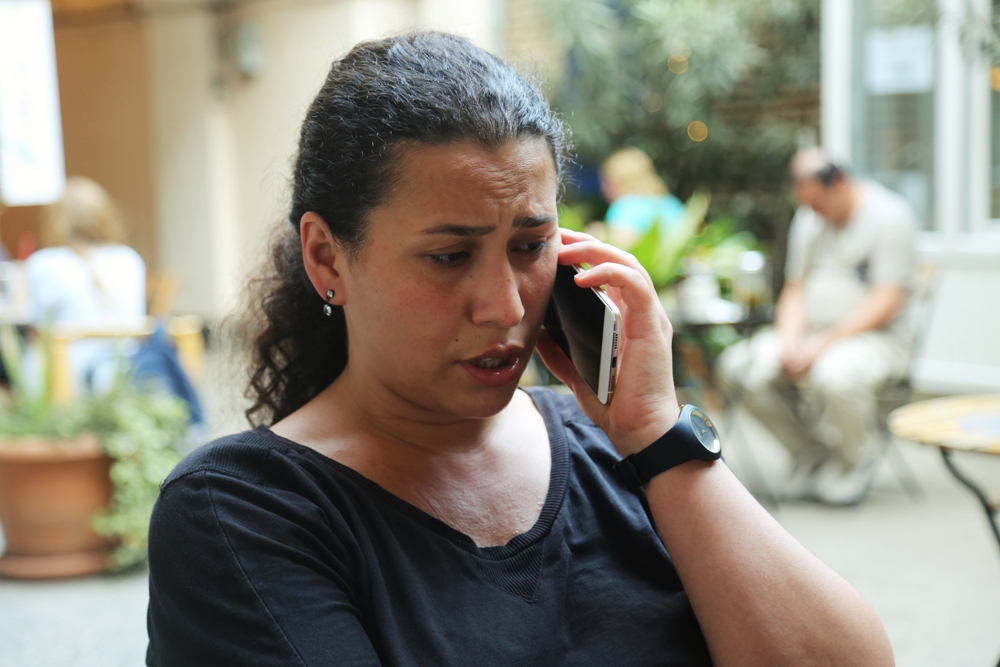 Leyla Mustafayeva, the wife of independent journalist Afghan Mukhtarli, who was abducted in Tbilisi and taken back to his home country of Azerbaijan in late May, says she will never give up fighting for her husband’s release and exposing the truth about his disappearance. (Photo: Giorgi Lomsadze)

Before this summer, if Leyla Mustafayeva walked into a coffee shop in Tbilisi, none of the patrons would recognize her. But that was before her husband, independent journalist Afghan Mukhtarli, was abducted in Tbilisi and taken back to his home country of Azerbaijan.

Since then, Mustafayeva has become a local celebrity of sorts for her outspoken criticism of Georgian and Azerbaijani authorities, whom she accuses of arranging the abduction.

During a recent meeting with a EurasiaNet.org reporter for coffee in a central Tbilisi cafe, some patrons approached her, asked her how her husband was doing, and told her to stay strong. “Please let us know if there’s anything we can do to help,” one said.

It is just one example of how widely her husband’s case has resonated in their adopted country. “Three months have gone by, and Afghan has not been forgotten here in Georgia,” she says.

Her husband is awaiting trial in Azerbaijan, where he turned up after disappearing in Georgia on May 29. He maintains he was abducted in Tbilisi, driven across the border to Azerbaijan and falsely charged with illegal border crossing, smuggling and resisting arrest. The criminal case is retaliation for his investigative work, he insists.

Local and international media freedom watchdogs heap scorn on the notion that a journalist who moved to Georgia to escape persecution in notoriously repressive Azerbaijan would go back of his own accord, and bring just enough cash with him (10,000 euros) to qualify for smuggling charges.

Mukhtarli and Mustafayeva, like many other journalists and activists from Azerbaijan, moved to Georgia because they felt increasingly unsafe at home, where scores of journalists have been arrested on dubious charges in recent years.

The couple easily adapted to their new environment. “I grew up not too far away, in Gazakh, close to the Georgian border. My parents still live there,” Mustafayeva said. “My four-year-old daughter, who goes to kindergarten here, is the only Azerbaijani in our family who actually speaks Georgian,” she says with a smile.

These days, Mustafayeva has no way to contact her husband; he has to call her from prison. After the most recent phone call, she has grown increasingly concerned about his health. “He has chest pain and his pulse runs at 104 [beats per minute], and he is not getting the medical help that he needs,” she said.

A type II diabetic, he did not receive his medication during his first week in prison, she said. A court in Baku has declined appeals to release Mukhtarli on bail on grounds of poor health, and recently extended his pre-trial detention term until the end of October. A trial date has not yet been set.

Mustafayeva does not pin much hope on Georgian authorities’ probe into the circumstances of Mukhtarli’s disappearance. She believes Georgian authorities were somehow involved in his apparent abduction, allegedly acting out of a desire to maintain good relations with Azerbaijan, a key energy supplier for Georgia, as well as the country’s largest outside investor.

Georgian officials strenuously deny involvement, but their accounts have been riddled with inconsistencies. First, they rejected the claims of abduction out of hand, but later, as domestic and international criticism swelled, suspended a number of counterintelligence and border police officials, pending the outcome of an investigation.

Three months later, the investigation appears to have made little progress. Heightening skepticism about the reliability of the probe was a revelation in late July that closed-circuit television cameras at the Georgia-Azerbaijan border checkpoint appeared to be out of order on the day Mukhtarli was taken across the border.

“All these circumstances lead us to suspect that we are facing a cover-up,” said Giorgi Gogia, South Caucasus director at Human Rights Watch. “In any case, it is a fact that the investigation is not being conducted in an efficient manner.”

The Prosecutor’s Office of Georgia did not respond to EurasiaNet.org’s questions about the progress of the investigation. Mustafayeva said she suspects that Georgian authorities are drawing out the probe, hoping that the case will fade from the public memory.

Mustafayeva’s persistence in demanding answers from Georgian authorities has earned her lots of local admiration, especially from among Georgian journalists. She also earned plaudits for dismissing Prime Minister Giorgi Kvirikashvili’s calls to give her Georgian citizenship, which would have provided protection for her against potential persecution from Azerbaijani authorities.

“That was a bribe,” she says. “I am not going to give them an excuse to pretend they had nothing to do with it.”

Mustafayeva said she will never give up fighting for her husband’s release and exposing the truth about his disappearance. On September 10, she went public with photos and videos of unidentified individuals, who appeared to be following her around in Tbilisi. She said her husband also was followed before his kidnapping. The Georgian Prosecutor’s Office said it launched an investigation into the allegations.

Mustafayeva also intends to finish the investigative stories that her husband was working on. “He was investigating [Azerbaijani President Ilham] Aliyev family’s business in Georgia,” she says. “I am going to finish his work.”