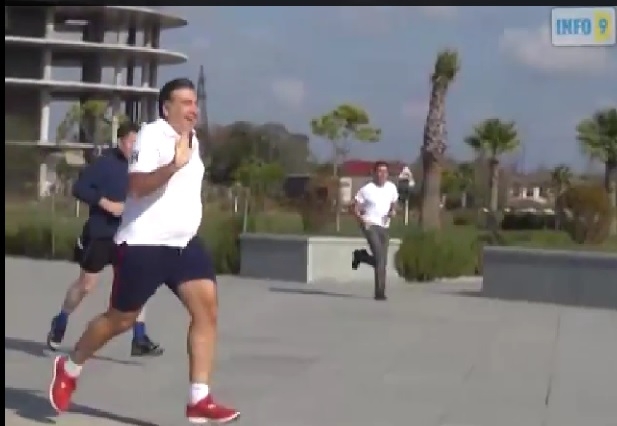 Video-footage posted by the former Info9.ge site shows Mikheil Saakashvili on the run in happier days at the Black-Sea resort of Anaklia.

Georgia is now chasing its former president, Mikheil Saakashvili, with criminal charges of abuse of authority. But the leader of the 2003 Rose Revolution has no intention of turning himself in to prosecutors whom some see as fixated on crushing the ex-president and his allies.

The charges are linked to the brutal breakup of an anti-government rally in November 2007 and the alleged expropriation of assets owned by the late media mogul, Badri Patarkatsishvili. If proven guilty, the ex-president, three former cabinet ministers and an ex-mayor of the capital, Tbilisi, could face up to eight years in prison, the Georgian prosecutor’s office said.

Reactions already have started pouring in from outside Georgia. A group of US senators, including Republican John McCain of Arizona, a longtime Misha buddy, expressed disappointment with the charges. The Wall Street Journal condemned the move, while Forbes found it perfectly justifiable.

Within Georgia, assessments vary about the government’s motives: is it justice, retribution or both? On one hand, the brutal clashes and the on-air raid of Patarkatsishvili’s outspokenly critical TV station, Imedi, remained seared in everyone’s memory. And these were not the only cases that caused widespread anger with Saakashvili’s 2004-2013 rule.

Saakashvili himself called the charges farcical and shook his finger at the man he sees as his main foe in Georgia, ex-Prime Minister Bidzina Ivanishili, the billionaire creator of the ruling Georgian Dream coalition, and the man many Georgians believe still runs the country.

“One Russian oligarch blames me for foiling unrest and a coup orchestrated by another oligarch,” Saakashvili wrote on Facebook, in reference to the late Patarkatsishvili (blamed in 2007 for attempting a government coup) and Ivanishvili.

These two billionaires both made their fortunes in Russia and Saakashvili, though once friendly with both, in recent years has persistently accused them of being Moscow’s stooges. “Russia is celebrating now and Ivanishvili will probably get duly rewarded for fulfilling this order,” he commented.

Talk about “Vladimir Putin’s tentacles” and the like are largely seen as tired lines in Georgia, but so is the government’s constant talk about the “restoration of justice,” a device that many charge amounts only to prosecuting formerly prominent Saakashvili allies.

Saakashvili, who appears to be anywhere and everywhere these days, earlier refused a subpoena to return to Georgia for questioning on “other criminal cases.”

As of yet, an arrest warrant has not been issued for him, prosecutors say.

Justice Minister Tea Tsulukiani has tried to reverse the impression that Georgia’s concept of justice is defined by nailing Saakashvili. In her blog, she argued that nobody in the Georgian government, except the prosecutor’s office (which answers to her ministry), cares about the ex-president.

But things that other Georgian officials say suggest the opposite. Current Prime Minister Irakli Gharibashvili, Ivanishvili’s former factotum, lashed out at seeing Saakashvili appear in Ukraine during the unrest in Kyiv earlier this year, while Interior Minister Alexander Chikaidze claimed that the Saakashvili crowd was planning a Euromaidan-style revolution in Tbilisi against the current authorities.

Tsulukiani, though, believes that Georgians should stop worrying about Saakashvili. Instead, she wrote, they should move on and look forward.

Some argue that Tsulukiani could benefit from her own advice.