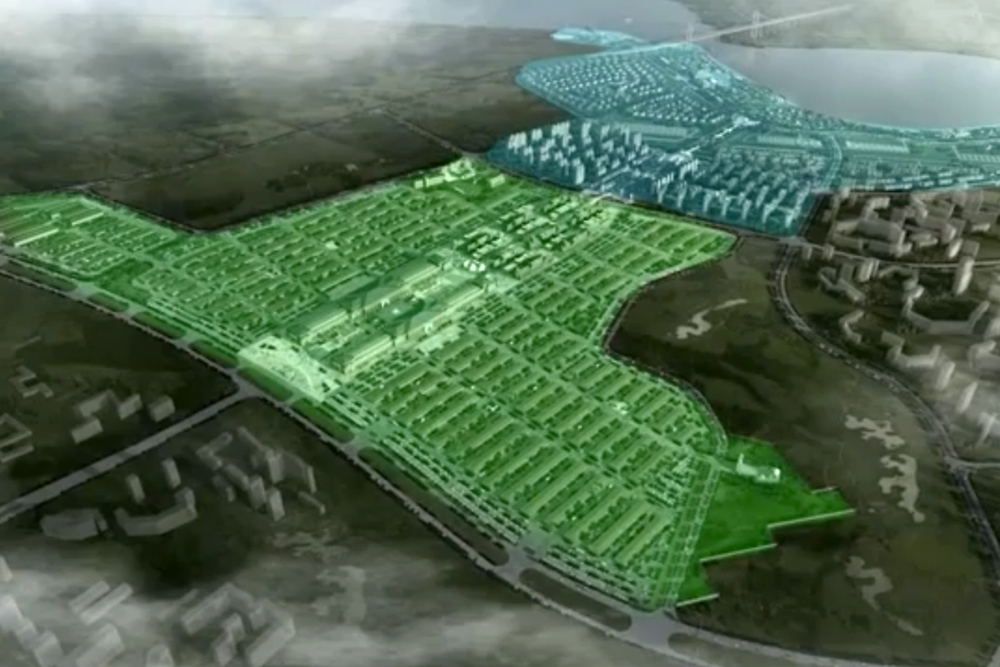 A $150-million-plus Chinese real estate and tourism deal that is slated for a suburb of Georgia’s capital, Tbilisi, is creating a quandary for many Georgians. The project is feeding a long-standing desire for foreign investment, but it is also stoking wariness about foreign influence.

Set against a broad backdrop of crumbling, Soviet-era apartment blocks, the project -- run by the Hualing Group, a privately owned, Xinjiang, China,-based company with banking, timber, and hotel investments in Georgia – is projected to remake about 420 hectares of land in the working-class district of Vazisubani.

In the first, $150-million phase, housing will be built on four hectares for the European Youth Olympic Festival, an event of young athletes from 48 European countries that Tbilisi will host in 2015. A subsequent step is expected to include a retail and residential area, to be built at an unknown cost.

Last year, President Mikheil Saakashvili’s government praised the Hualing Group for bringing in much-needed investment and employment to a poor, densely populated part of Tbilisi. The level of investment for the first phase amounts to more than five times the size of total Chinese foreign investment in Georgia in 2012.

At the same time, rumors that the project will bring 127,000 Chinese immigrants into the city to work and live are generating local concern – increasingly prevalent since the 2008 war with Russia -- about foreigners pushing Georgians off their own land and depriving them of hard-to-find jobs. “Nothing will be left for us [if so many Chinese come],” complained Gulara, a 62 year-old female pensioner who lives near the planned development site. “Where did all these ethnic groups come from? […] God gave us this land.”

In recent years, Tbilisi has experienced an influx of immigrants from Africa and South Asia, as well as occasional Chinese traders, and Arab investors. But in a country of 4.49 million people with estimated rates of unemployment over 50 percent, these visitors are sometimes seen more as an economic threat than as a source of opportunity.

“People are not aware of how to deal with, how to cohabitate … with others,” said Nana Berekashvili, the head of the Department on Minorities and Gender at Tbilisi’s International Center on Conflict and Negotiation. “In [the] case of [the] Chinese, I think it is … [people] having the notion about China that it is huge and enormously populated, and their idea is somehow to expand.”

Representatives of the Hualing Group denied that there are plans for a massive resettlement of Chinese to Tbilisi. The residential buildings that will begin construction once the Olympic Village is finished will be sold on the open market, and are not sufficient to house 127,000 people, commented the company’s Georgia spokesperson, Tina Shishinashvili.
She emphasized that 531 of the project’s 659 workers are Georgian citizens. Hualing has also taken on Georgian architects to design its overall strategic plan, she said.

But such assurances mean little to figures such as Jondi Bagaturia, the outspoken head of the right-wing Kartuli Dasi (Georgian Troupe) political party. The party has played a prominent role in stoking popular discontent over the project with claims of a pending Chinese resettlement.

Bagaturia says he bases his opposition on what he purports to be a copy of the contract between the Georgian government and the Hualing Group. Although the investment itself is “very good,” he said any influx of Chinese immigrants is “unacceptable” since the government “must protect the labor market.”

Neither the Economic Development Ministry nor Tbilisi City Hall responded to requests for comment about the planned investment. The project’s architectural plan is still awaiting municipal approval.

Hualing Group’s interest in Georgia is not unusual. Chinese companies in the past have been involved in large-scale investments ranging from the construction of a hydropower plant to a railway tunnel. With a trade turnover of $591.5 million, China in 2012 ranked as Georgia’s fourth largest trading partner.

Yet Georgians’ attitudes toward the Chinese -- and immigrants in general -- remain complex. A 2010 survey by the Caucasus Research Resource Center in Tbilisi found that while 57 percent of 2,089 Georgian respondents supported doing business with the Chinese, 80 percent were against the closer tie of marriage.

While Georgian culture stipulates hospitality and respect toward guests, Berekashvili commented, Georgians are selective about which ethnic groups are welcomed. They “are very hospitable toward people from Western cultures, from Europe, from the United States, but very little to others,” she said.

For Yu Hua, a Chinese businessman, Georgia is still a land of opportunity. After 14 years in the country, Yu serves as the president of the newly formed Chinese Chamber of Commerce and is married to a Georgian.

He says that he has never experienced racism or discrimination, but underlines that the government and media need “to offer… correct information” to dispel rumors that could spoil Chinese-Georgian business ties.

As a small crew cleared mounds of earth from the European Youth Olympic Village site one day last month, a group of male onlookers dismissed the Chinese project with shrugs and a curse. But one 65-year-old woman selling sunflower seeds near the site remained optimistic.