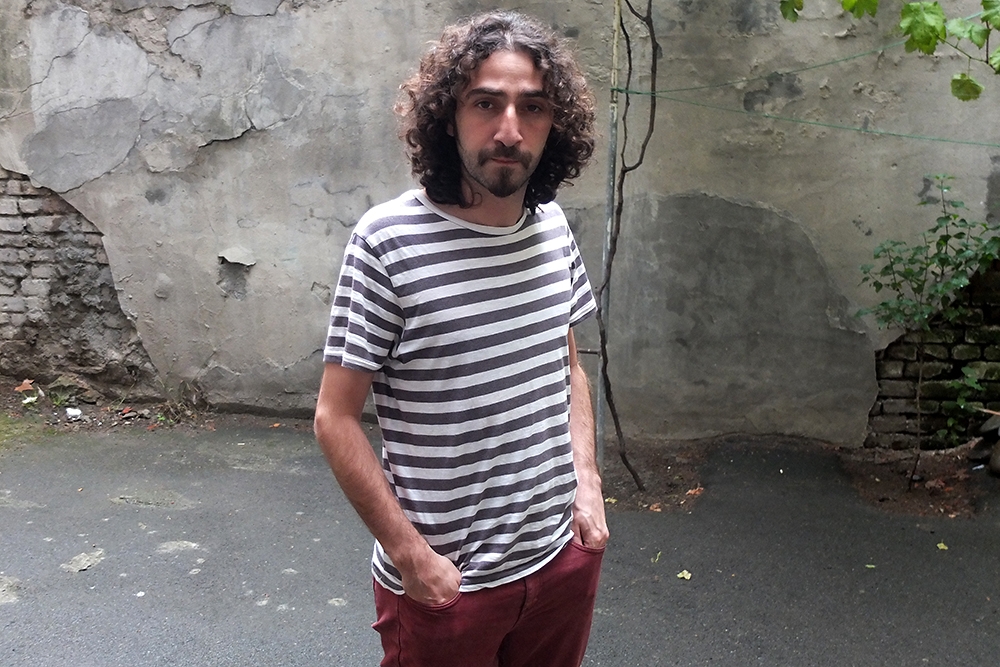 In 2013, Beqa Tsikarishvili was arrested for possession of 69 grams of marijuana. Faced with up to 14 years of imprisonment as a first-time offender, the 28-year-old journalist and his friends started a campaign, “Beqa Is Not a Criminal,” to protest the harsh, disproportional drug laws. (Photo: Paul Rimple)

Drug legalization advocates in Georgia have reason to cheer. The South Caucasus country’s Constitutional Court has issued a decision that prohibits the incarceration of individuals found to be in possession of up to 70 grams of marijuana.

The October 24 decision has created a degree of legal uncertainty: possession rules have been eased, but it remains a crime to use marijuana. Parliament will need to make some changes to the Criminal Code in order for it to conform to the court’s decision.

Giorgi Papuashvili, the president of Georgia’s Constitutional Court, told EurasiaNet.org that the justices, after reviewing the case before them, considered jailing a first-time offender for possession of under 70 grams to be “cruel.”

“The court declared that in order to use imprisonment as a punishment, the state should act for the purpose of protecting the health of other people,” read a synopsis of the ruling distributed by the court. “Therefore possession of marijuana can only be punished by imprisonment when the intention to distribute is established by the prosecutor, or the amount of marijuana possessed by the accused is so high that it is not possible for such amount to be considered for personal use only.”

Public discussion about liberalizing Georgia’s harsh drug laws, some provisions dating back to the Soviet era, began shortly after the 2012 parliamentary elections, when the Georgian Dream came to power. But no reforms had been introduced by the time Beqa Tsikarishvili was arrested in 2013 for possession of 69 grams of marijuana. Faced with up to 14 years in prison as a first-time offender, the 28-year-old journalist and his friends started a campaign, “Beqa Is Not a Criminal” to promote reform. Tsikarishvili also filed a lawsuit.

Up until 2015, Georgia recognized no difference between soft and hard drugs, or between possession and intent to sell. Possession of any narcotic without a doctor’s prescription is punishable by a first-time fine of 500 laris (about $209), roughly 65 percent of the average per-capita monthly salary in Georgia. A second possession conviction within the same year carries a fine of 2,000 laris ($837), or one-year in jail. Conviction of possessing large amounts of drugs can land an individual in prison for life.

Tsikarishvili’s lawyer, Vakhushti Menabde, claims the prosecutor refused to negotiate a deal to pay a fine in lieu of imprisonment. “In a way, the prosecutor’s office acted against itself. They forced us to go to the Constitutional Court. Now, the state does not find a person possessing marijuana a threat to society and understands that imprisonment for that offense is a human rights violation,” Menabde stated.

On November 17, Georgian courts released 10 individuals who, after the Constitutional Court ruling, had appealed their convictions for marijuana possession. Up to 92 individuals remain behind bars on marijuana charges, according to November statistics from the penitentiary department.

The Georgian Constitutional Court’s ruling only applies to statutes covering possession, under Article 260 of the criminal code. The decision appears to allow for imprisonment for the use of marijuana, even if the suspect is not caught in the act of consuming the narcotic. Use can be determined by a urine test, which is now mandatory upon police request.

In October, the Ministry of Internal Affairs changed the criteria for urine tests. Before, tests were ordered randomly at the discretion of the police. Now, a person ordered to undergo testing must have committed a crime, disobeyed an order from a policeman, or be the subject of “operative information.”

While lawyers agree these changes are an improvement, they believe the term “operative information” is too vague. They complain that they cannot verify the sources for such “information.”

Papuashvili emphasized that the court’s decision does not decriminalize possession of less than 70 grams for first-time offenders; it merely proscribes imprisonment as a punishment. Those caught with small amounts are still subject to a fine and probation. If caught in possession a second time within a year, the suspect could go to prison.

The court’s decision has energized the legalization debate in Georgia. Sopho Verdzeuli, a lawyer at the Human Rights Education and Monitoring Center, a Tbilisi-based non-governmental organization, interprets the Constitutional Court’s ruling on possession of marijuana to include usage.

“The criminal code needs to be amended. These criminal codes appear often in court, so there is an interest to move quickly on this,” Verdzeuli asserted. The Constitutional Court ruling should be an incentive to do this, she added.

In June, independent lawmaker Goga Khachidze submitted a bill to decriminalize the personal use of small amounts of marijuana, but the draft was shot down in parliament. In September, parliament’s Legal Issues Committee endorsed an earlier proposal to redraft a bill to abolish imprisonment as a punishment for marijuana possession, but the 8-1 Constitutional Court decision has superseded this project and raised the discussion level a notch.

Legal Issues Committee Deputy Chair Tamara Kordzaia says the committee now works to bring the criminal code in line with the Court’s ruling, but admits lawmakers are divided on how far to go with changes. “Some MPs believe it’s necessary to decriminalize, others agree with the Court decision and others are dissatisfied. But the most important thing is that parliament cannot adopt a law below the standard the Constitutional Court has set,” Kordzaia said.

For Georgia’s rights activists, the Court decision is a green light to keep pushing.

The exonerated Tsikarishvili has set up “White Noise,” a grassroots group lobbying for the decriminalization of marijuana. Others, like activist Paata Sabelashvili, a former program director at the local Harm Reduction Network, which addresses drug use as a health issue, is pushing to expand the judgment to all narcotics.

The Human Rights Education and Monitoring Center’s Verdzeuli concedes Georgia is a long way from legalization, but maintains that it has overcome a major hurdle on the road to reforming its drug laws. “The court decision is a huge step forward. You cannot stop the process,” she affirmed.