Georgia: Could the Orthodox Church Become a Font of Intolerance? 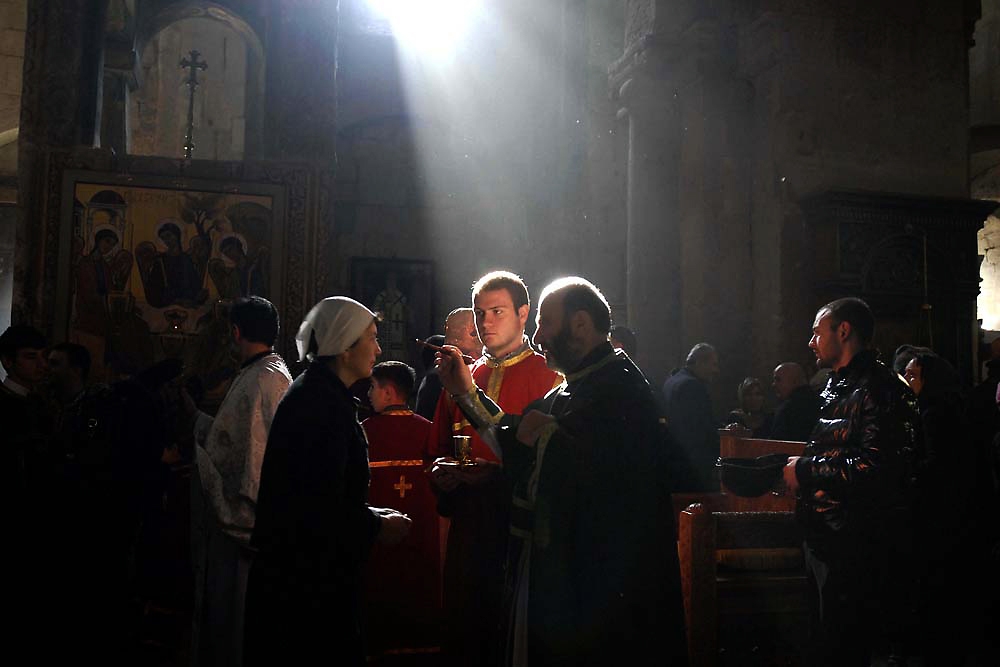 The Georgian Orthodox Church has been growing over the past two decades under the leadership of the 80-year-old patriarch, Ilia II. (Photo: Molly Corso)

In the two-plus decades since the Soviet collapse, the Georgian Orthodox Church has emerged as one of the South Caucasus country’s most respected and influential institutions. But some observers and theologians now worry that ultra-conservative clerics within the Church are gaining too much power.

The growing sway of fundamentalist and nationalist elements within the Church was on full display on May 17, when a clergy-led mob attacked gay-rights demonstrators in Tbilisi.

That priestly outburst of bigotry was not an isolated incident. Previous occurrences of ultra-conservative muscle-flexing included a mass mobilization against Georgian ID cards, allegedly because ultras believed the cards referenced the sign of the devil. Ultras also actively campaigned against President Mikheil Saakashvili’s United National Movement Party during the run-up to the October 2012 parliament elections – despite the patriarch’s request to stay out of politics.

The parliamentary election experience suggests to some Church watchers that the Patriarch, Ilya II, is losing his grip over the clergy. Ilya II is 80 years old and rumored to be in poor health. Although his word is final in all areas of the Church’s internal workings, age may have significantly diminished his ability to pay attention to details and promote general doctrinal unity among the clergy.

While the patriarch remains a popular leader of the Church, it’s difficult to tell where many bishops stand. What is increasingly evident is that a philosophical split is developing within the Church. Theologian Levan Abashidze describes the divide as “serious.”

A press representative for the Church did not respond to interview request.

According to some outside observers, the Georgian Orthodox Church has been moving in a steadily conservative direction since 1997, when it left the World Council of Churches (WCC). A major factor in this retrograde drift is a decline in the educational level of clergy members.

“The Orthodox Church in Georgia today reflects all those problems that have been problematic for the Georgian nation and state: poor education, economic shortages and unemployment, the lack of the civil society, underdeveloped democracy, a long gap in the organized church life, unqualified clergy … all these factors supporting its isolationist and exclusivist tendencies,” noted Tamara Grdzelidze, a program executive within the Faith and Order Secretariat of the WCC in Geneva.

When Ilya II became the patriarch in 1977, the Georgian Church counted only about 50 priests. Since the lifting of Soviet-era controls over religious life, the ranks of the clergy have exploded, with upwards of 1,700 ordained priests active today. Not all members of the clergy have gained a thorough grounding in theology via training at a seminary or theological academy.

Limited oversight over the preparation of priests means that the quality of their religious teachings varies widely. Rapid growth helped strengthen the Church, but it created a “vacuum” of knowledge, noted one theologian close to the Patriarchate who spoke on condition of anonymity out of fear of retribution.

“[People] should know that [beating people] is not Christian, is not Orthodox, is not Georgian. …There is a vacuum of theology,” he said.
Priests who lack proper training are more apt to be part of the ultra-conservative movement within the Church. “[We need to] learn how to think,” the theologian said. “If we start to learn philosophy … tomorrow we will not throw rocks.”

The philosophical struggle within the Church seems set to intensify as Ilya II grows older and attention focuses on succession. In the Orthodox Christian faith, the patriarch is a life-long appointment. After the sitting patriarch’s death, a successor is chosen by the Church’s governing body of archbishops, the Holy Synod.

The outcome of the current succession maneuvering could have far-reaching implications for Georgia’s domestic and foreign policy, given patriarch’s ability to shape public opinion. Earlier this year, Ilya II was identified as Georgia’s most trusted public figure, according to a March 2013 survey by Caucasus Research Resource Center (CRRC).

Since the May 17 upheaval in Tbilisi, Ilya II has been an advocate of moderation and tolerance. “We need to value people,” he said during his June 2 sermon. “We need to see in people…these positive elements that God awarded them. It is possible that a person has negative sides. But the positive is infinitely more.”

Abashidze noted that there are “certain groups” within the Church that are already engaged in a “strong fight for power.”

“There are groups who are more, let us say, open minded, and who understand that the Church needs real education, real theological education and people with theological knowledge – because otherwise the Church cannot survive,” he said.

Liberals, however, are in the minority, and there are few willing to publicly break ranks with conservatives. In an interview with the Georgian magazine Liberali after the May 17 mob attack, however, one priest urged his colleagues to speak up. “Probably a lot of religious people were very surprised by what happened,” said Dekan Iakob Makhniashvili. “For every religious person, this day should serve as a good example that religion should not provoke people into aggression and hate.”