The mass slaughter of animals in the syncretic pagan-Christian Lomisoba festival is out of step with 21st-century mores, some Georgians argue. 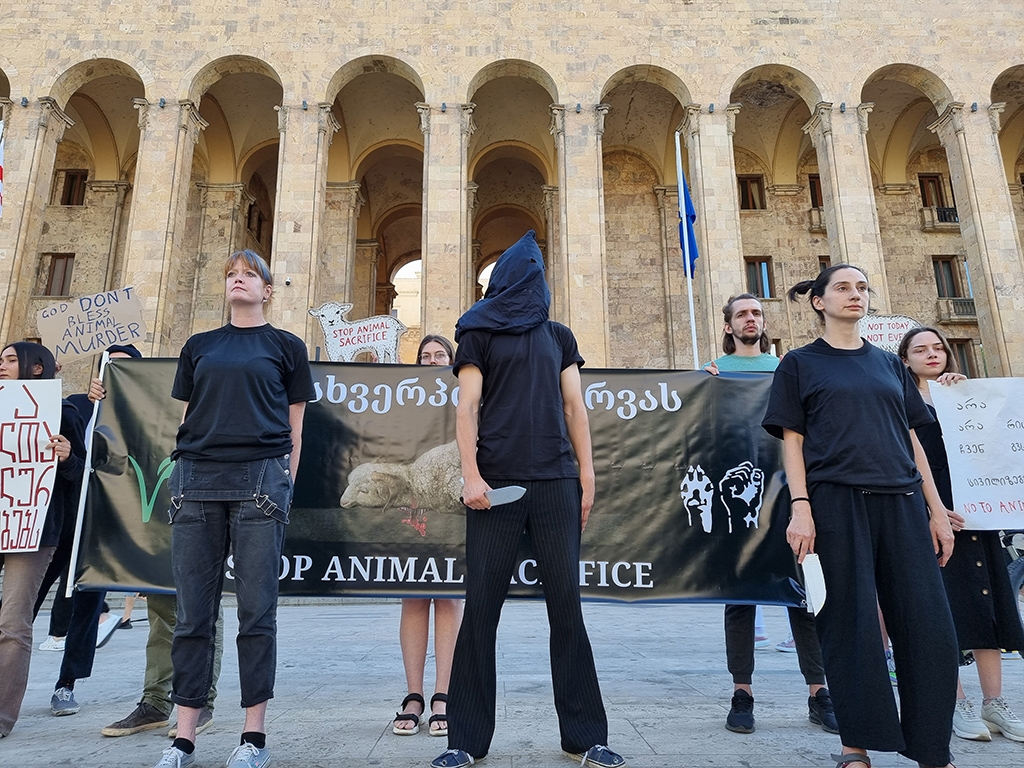 Activists with No to Animal Sacrifice protest in Tbilisi on June 12. (photos by Giorgi Lomsadze)

Caked in mud and sweat, Vazha is climbing uphill on a slippery path. Heavyset, his face red with the strain, he struggles to keep up with other pilgrims as they labor toward the hilltop shrine of Lomisi, a rock-hewn eyrie where Christian and pagan traditions meet.

It is the annual festival of Lomisoba and Vazha, like the other pilgrims, has something to ask of St. George of Lomisi once he reaches the top. He will put a heavy steel chain on his neck, make three circles inside the 9th-century church and ask for a child, preferably a boy. When he comes back down the mountain, he will seal the deal by sacrificing a ram to St. George, one of scores of animals that will be slaughtered at the event.

“I know that it is very selfish to ask for something for your family only, when people are dying in Ukraine,” he said, emptying a bottle of water and tossing it to the ground. “I should really be asking for peace, but, well…”

Behind and ahead of him are endless queues of pilgrims – mainly Georgian highlanders belonging to groups like the Tush, the Khevsurs, and the Pshavs. They snake up the trail, plodding on almost rhythmically, as if to the peals of an imaginary gong. It is a Sisyphean climb in mud and intermittent drizzle, with the snow-capped peaks of the Caucasus frowning over from above.

With locks of black hair sticking out from under their headscarves, two women in their early twenties brought panduris, the traditional three-stringed instrument, to the festival and were playing them before starting their ascent. What were they going to request of St. George? “Husbands!” they replied, and roared with laughter. They are far behind, coats tied around their waists, stopping frequently to lean on their knees. Their aging father cannot handle such rigors anymore, so he stayed behind in the valley with the lamb that he brought to sacrifice.

As he reached the final and hardest stretch, Vazha slipped on the mud and tripped forward. He landed on his belly and slid down for a little bit, sending a barrage of stones jumping angrily down the rocky slope behind. “Watch your step, man,” said his wiry, stern-faced wife as she nimbly overtook him without any particular display of concern.

“God, help us,” Vazha said, as he stood up, panting and looking up with his hand cupped over his eyes. The church did not seem to be getting any closer.

Lomisoba, which has its roots in Georgia’s ancient, pre-Christian history, has in recent years become the subject of controversy because of the mass animal sacrifice attached to it.

The sacrifice begins after the worshippers descend back into the valley. Herds of livestock are loaded into the open backs of cargo trucks and carried to a knoll at the foot of Lomisi Mountain. Some men throw sheep around their shoulders and walk on foot to the site, which is soaked in centuries of sacrificial blood.

It takes place seven weeks after Easter – June 15 this year – and knives worked tirelessly the entire evening. Sheep, lambs and calves went silent one after another as blood flowed across the meadows and severed animal heads rolled on the ground. Men ritualistically singed the sheep’s wool with candles at the forehead and behind the horns before putting them to the knife.

The revelers then progressed to a massive feast, with picnics spread out amid the charnel.

For many Georgians, it’s a tradition that needs updating.

“It’s an annual bloodbath, with senseless, ritualistic killings of animals that does not belong in the 21st century,” Nini Turiashvili, a vegan activist with the group No to Animal Sacrifice, told Eurasianet.

The movement has been holding annual protests for seven years in advance of the holiday. This year, they staged a mock lamb-killing performance in the center of Tbilisi on June 12 to call attention to the tradition.

Even many omnivorous and religious Georgians oppose the slaughter, which is thought to be a holdover from the ancient times when various formidable deities ruled the mountains of Georgia, such as the giant-fighting Iakhsari and club-wielding Kopala. Some historians believe that one of these gods, Lomisa the moon god, morphed into St. George following the highlands’ reluctant acceptance of Christianity.

Now, religious practice in the mountains is a syncretic mix of the pagan and Christian. Here in the Mtiuleti highland in Georgia’s northeast, community elders known as khevisberis still perform religious rituals that put them at odds with Orthodox Christian clerics.

Pioneering historian Ivane Javakhishvili theorized that the practice of donning the massive chain inside the Lomisi church is rooted in the ancient ritual of offering human sacrifice to the moon god. Local legend claims that the tradition was started by a medieval princess who carried the chain up to the shrine to atone for her sins.

After finally reaching the top, Vazha joined a row of four people who together wore the enormous chain around their necks and sedulously walked in circles, single file. Running on the fumes, he then came out of the crowded shrine to take a breath. It was getting hot. Overcast skies hung low over the hilltop and mists meandered about the ravines below.

Tensions with the church

Many Orthodox priests also oppose the Lomisoba animal sacrifice. One priest native to the area recounted in a 2021 Facebook video his experience of witnessing it for the first time at the age of 11. “My father forced me to go there and I found a horrific sight,” recalled the priest, Father Saba Chikaidze.

Amid pools of blood and the primordial excitement of the crowd, he saw a black calf that an old woman had brought to sacrifice in the name of her deceased son. “The calf looked me straight in the eye. Before long, they cut his head off and threw it away. […] For a split second, the calf stood up to his feet, headless, with blood shooting in every direction. When he stood up, I fainted,” the priest recalled.

Left with nightmares for a lifetime, Chikaidze has not been to Lomisoba since and said he struggles to extricate the butchery from what he says is meant to be a Christian festival of humility and atonement. “No blood sacrifice is justified by Christianity,” he said. “The last blood sacrifice was Jesus, the embodiment of God on earth.”

The church, however, is not entirely opposed to animal slaughter on religious holidays. Patriarch Ilia II, the supreme pontiff of the Georgian Orthodox Church, decreed to slaughter one young a bull, seven ewes and seven rams during every Easter celebration at the cathedral of Svetitskhoveli in the town of Mtskheta, where he performs the Easter service. Believers argued that the command was intended to help feed the worshipers who flock to the cathedral from all over Georgia on Easter, but animal rights activists argued that the practice ritualizes animal slaughter.

At the June 12 rally in Tbilisi, members of No to Animal Sacrifice played a recording of the patriarch’s words about slaughtering animals on Easter and tried to march to his residence, but were prevented by police. Officers, who were visibly upset and complained to each other about what they perceived as disrespect toward the widely venerated church leader, detained two activists and accused them of disobeying police orders.

“Our two friends were simply walking across the road when they detained them,” said Turiashvili. “Police clearly let their religious beliefs get in the way of their actual job of maintaining order.”

Worshippers at Lomisoba also don’t like too many questions about the animal sacrifice. Vazha’s friendly demeanor dissipated the moment he perceived a hint of judgement in a query about the ritual.

“If you don’t like what you see, you should not come up here and pretend that you respect our traditions,” Vazha said crossly, as he retrieved the carcass of his ram from the makeshift open-air butcher’s shop. “Go back to Tbilisi and stuff your face at the restaurants. Just don’t forget where your meat comes from.”