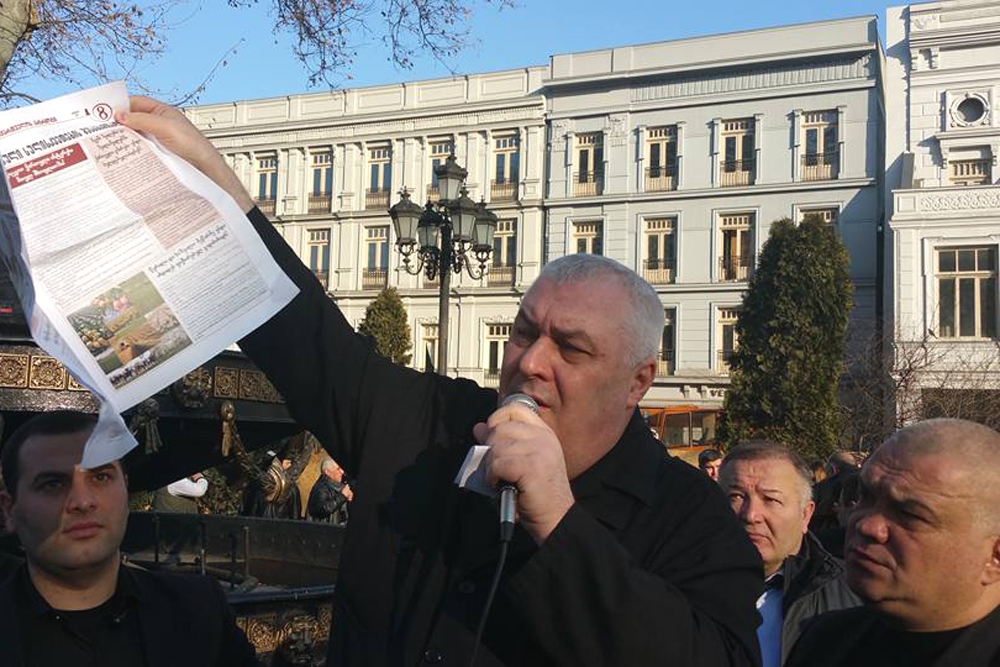 Georgians appear to be growing disillusioned with the country's Western-oriented political elite over its failure to improve the country's standard of living. An indicator of the restless public mood is the growth in popularity of a right-wing populist party, which gained seats in the Georgia’s parliament following recent elections.

The Alliance of Patriots party barely cleared the 5-percent representation threshold in the October 8 voting – emerging as one of three parties to gain seats in the new legislature. In doing so, it registered a better electoral result than more established parties.

“Multiculturalism is now broken,” Maghlakelidze said in an interview in the party's offices in central Tbilisi, sparsely decorated except for a large display of Orthodox Christian icons and crosses. “And maybe it's time for some new views, new directions that look at the country from its historical perspective, but still integrated into the world economy. There's a different movement going on now.”

The party supports membership in the European Union and NATO, though it cautions that those organizations are not inclined to accept Georgia as a member, and that that reality cannot be ignored. “NATO and European Union membership would be good, but it's now closed for us. The ball is in their court, Georgia can't do anything. And we don't want to lie to our people,” Maghlakelidze said.

Those views have led some Georgian figures, notably the United National Movement of former president Mikheil Saakashvili, to call the Alliance “pro-Russian.” Maghlakelidze argued that they only do so to deflect attention from their excessive deference to the West. “They put this [pro-Russia] label on everyone they don't agree with,” he said.

Maghlakelidze criticized the current Georgian leadership for supposedly giving Western states unacceptable levels of control over Georgian affairs, including governmental appointments and laws. “Anything the European Union or United States gives them, they sign without even looking at it,” he claimed.

The party's platform, published on its website in Georgian and English, is tailored to appeal to a pious, conservative population. It places heavy emphasis on social programs, such as expanded public housing and medical care, as well as pledges to support Georgian folk singing and dance.

“True patriotism means thinking and pondering, speaking and discussing, acting and behaving in conformity with the national spirit, which in our case is the Georgian spirit,” the platform reads. “Georgian spirit means dedication to the Homeland, devotion to faith in God, love for everything Georgian, and respect for our native language.”

That “Georgia First” campaign resonated with voters like Goderzdi Sheshelidze, a 67-year-old retiree who spends his days hanging out at an open-air market next to the Didube bus station in Tbilisi. He lamented his low pension and the failure of Georgia's politicians to make more progress on promoting prosperity.

Sheshelidze believes Georgian political leaders are beholden to foreign interests rather than to Georgians. Holding a newspaper whose front page featured several politicians' photos, he criticized each one in turn. “This one was picked by Turkey, this one by the United States, this one by Russia, this one by the UK,” he said. “None of them love Georgia.”

Sheshelidze’s preferences perhaps seem more influenced by personalities than policies. He believes the Alliance would be different in part because another of its leaders, David Tarkhan-Mouravi, claims to be a direct descendant of Georgia's last king. “He has royal blood, and maybe this will be better than the peasants we have now,” he said.

Territorial integrity is on Sheshelidze’s mind. He asserted that Georgia's solicitous attitude toward non-Georgians could prompt the further dismemberment of the country. Georgia lost control of the separatist territories of Abkhazia and South Ossetia in the early 1990s, and slivers of territory have been under Russian occupation since a disastrous 2008 war.

“Just like the Russians took Abkhazia and South Ossetia, the Azeris are going to take Marneuli, the Armenians will take Javakheti, the Turks will take Adjara,” he said, referring to Georgian regions that border Azerbaijan, Armenia, and Turkey, respectively. “What will we be left with?”

The Alliance's victory has become the talk of Georgia's elite. “Every second or third joke on Facebook now is about them,” focusing particularly on Tarkhan-Mouravi's aristocratic pretensions, said Kornely Kakachia, director of the Georgian Institute for Politics. But this mockery is one of the reasons that the Alliance of Patriots took the country by surprise. “One of the biggest problems in Georgia is that we have this 'Facebook outlook,' liberal Georgians who just sit on Facebook and think that all of Georgia is on Facebook, and this is not true.”

Kakachia agrees that it is inaccurate to call the Alliance pro-Russian. “I would call them Russia neutral, but nationalistic with social conservative ideas, and also a very strong anti-Turkish sentiment.”

The party campaigned heavily on the message that Turkey has too much influence in Georgia, and has organized protests against the construction of a mosque in Adjara. “Turkey has never been, is not and will never be our friend – even a person with zero intellect should understand it,” Tarkhan-Mouravi said in 2014. “Saakashvili has actually sold Adjara to Turkey – Turkey has a simple plan to change a demographic picture there, and then influence politics there and some day they even may hold a referendum about annexation of Adjara.”

On September 27, a group of about 50 far-right nationalists attacked several Turkish restaurants in Tbilisi, shouting slogans like “The glory of the nation is death to the enemy.”

Maghlakelidze said he was not aware of that incident, but complained that the current government was too pro-Turkish, while alleging that the Turkish government is secretly subsidizing the Turkish restaurants in Tbilisi, without providing any evidence to support the claim. “And Georgians can't compete with that money from Istanbul,” he said.

The party's approach to Russia is more nuanced. “We support Georgian integration into the European Union, Georgia's integration under the European security umbrella, we support long, strong, and comprehensive relations with the United States,” Maghlakelidze said.

“At the same time, we support deep trade relations with Russia because the quality of Georgian products at this moment does not reach European or American standards. Some of them do, but not all. But the products we have today are acceptable for Russians. Why should we lose that market?” he added.

On the question of regaining control over Abkhazia and South Ossetia, Maghlakelidze said that the current leadership misunderstands Russia's motivations. “Most of Russia's interest here is economic – pipelines, ports, and so on,” he said. The Alliance would seek to bargain with Russia: allow Russian pipelines to Europe to pass through Georgia and block non-Russian pipelines like the proposed Trans-Caspian pipeline in exchange for the return of Abkhazia and South Ossetia.

The party's role in the parliament remains unclear. The two other parties, the United National Movement and Georgian Dream, are contesting several seats in runoff elections October 30. That will determine whether Georgian Dream, which won more than 48 percent of the vote in the first round, will be able to form a parliamentary majority by itself.

Maghlakelidze said the Alliance would consider forming a coalition with the Georgian Dream, but not with the UNM, which Tarkhan-Mouravi has called a “criminal organization.”

The prospect of a Georgian Dream absolute majority in parliament has alarmed many observers in Georgia, who believe it could give the party too much power to rule unchecked.

But Kakachia noted that it would also allow the Georgian Dream to rule without having to form a coalition with the Alliance of Patriots. That would effectively leave the Alliance no bargaining power and little role except as a sideshow and butt of jokes.

“These people are very strange, Georgian versions of Trump but even worse,” Kakachia said. “One way this may be good for Georgia is that after five years [the term of parliament] they will kill this idea” of populism, Kakachia said. “But it will be a lot of fun.”

Joshua Kucera is the Turkey/Caucasus editor at EurasiaNet, and author of The Bug Pit. He is based in Istanbul.