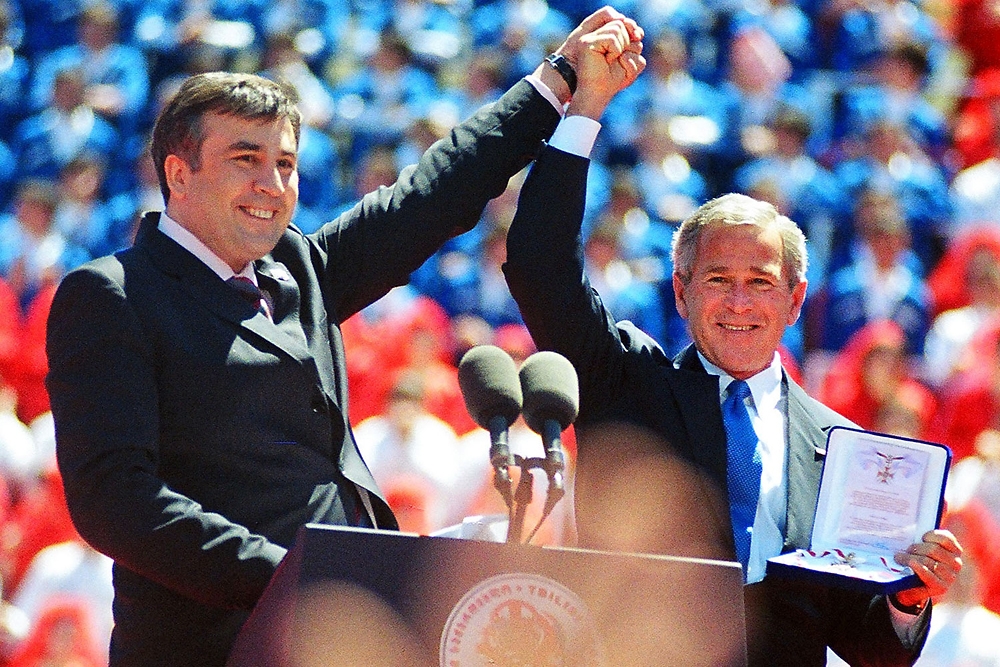 Saakashvili’s 10-year presidency was bookended by a violent revolution and a peaceful democratic handover of power. (Photo: Molly Corso)

Outgoing Georgian President Mikheil Saakashvili’s role as a state builder, a revolutionary, and a domineering leader determined to thrust his tiny country outside of Russia’s political orbit is well established. But as his nearly decade-long tenure comes to an end, Georgians are still struggling to define this 45-year-old leader and the mark he has left on Georgia.

Some point to the showy building facades that have transformed the Georgian capital, Tbilisi, and the Black-Sea port city of Batumi. Others laud his concession of the 2012 parliamentary elections, which marked the first time in the country’s history an incumbent party (Saakashvili’s United National Movement) gave up power via the ballot box. Still others cite Georgia’s disastrous 2008 war against Russia, which seemingly resulted in the Tbilisi’s permanent loss of breakaway South Ossetia and Abkhazia.

Saakashvili himself points to the Radisson Blu, a once derelict, high-rise hotel in downtown Tbilisi that, from 1993 until 2004, housed hundreds of displaced persons from Abkhazia. Pointing to the hotel through his living-room windows during a recent televised tour of the apartment where he will now live, Saakashvili asserted that the most important question is whether Georgia is “a different country than it was 10 years ago.”

For the leader of the 2003 Rose Revolution that ended the corrupt, dysfunctional rule of President Eduard Shevardnadze, that question is key. Over nearly the past 10 years, the president -- nicknamed Misha the Builder, a play on Davit the Builder, one of Georgia’s most influential kings -- has sought to tear Georgia, physically and mentally, out of its past.

That he has had triumphs is not disputed. Saakashvili established 24-hour electricity as the norm, built badly needed roads and schools and rebuilt towns and parts of cities. Under his watch, the economy grew (average monthly per-capita incomes nearly tripled between 2003 and 2012 to 218.4 laris or $132.36), and foreign tourists and investors arrived (FDI peaked at $673 million in 2011); the country forged closer ties with Europe and the United States, the police became respected, the mafia was routed and state institutions became functional.
But Tbilisi State University sociologist Iago Kachkachishvili cautioned that Saakashvili tended to “zig-zag” from good to bad policies; a tendency that makes it difficult for Georgian society to come to terms with his legacy.

While his intentions were rooted in a democratic worldview, Saakashvili often appeared to have a low tolerance for dissent, overseeing a sharp uptick in arrests (many related to corruption), a crackdown on the opposition, aggressive government influence over private media outlets and an unhealthy consolidation of ties among business and political interests that enabled corruption on an elite level to continue, even as petty corruption disappeared.

Against that backdrop, some Georgian analysts contend that Saakashvili’s legacy might boil down to the contrast between what was achieved and what failed.

As Georgia changed “from [a] typical post-Soviet society into a more . . . Westernized society,” argued Vakhtang Lejava, a chief economic advisor from 2009 to 2012 to ex-Prime Minister Nika Gilauri, the government raised the bar for people’s expectations. As Georgians’ expectations for government became higher, so, too, did the standard against which they judged Saakashvili, Lejava continued. “People changed,” he said. “[The UNM] changed the standard ... The bar became much higher. And at some particular parts, the UNM failed to be on that standard,” he said, citing in particular the 2012 scandal over abuse of prisoners.

While the president admits that mistakes were made during his administration, he has not elaborated. Saaakashvili himself did not agree to an interview with EurasiaNet.org in time for publication.

Giorgi Kandelaki, a senior UNM MP close to Saakashvili, believes that, for all the criticism of his government, the president should be seen as a “transformational leader,” who turned “Georgia into a state that, actually, for all its flaws, worked.” [Editor’s Note: Kandelaki once served as an editorial associate at EurasiaNet.org].

But in a culture of extremes, many Georgians are not likely to make room soon for nuances when it comes to Saakashvili’s record. No matter what events might await him in life after the presidency, Georgians will tend to view Saakashvili through the prism of savior or scoundrel, noted political scientist Gia Nodia, a former education minister under the president. “[It is] either/or. I think it will continue to be the case,” he said. “Maybe some individuals will try to be balanced, but I think that is atypical. For the vast majority of people, he is either a villain or a hero.”

Many Georgians charge that the Georgian-Dream-led government is negatively typecasting much of the UNM in that way.

Over the past year, many of Saakashvili’s closest allies, including former Prime Minister Vano Merabishvili and former Defense Minister Bacho Akhalaia, along with a score of other senior UNM-era bureaucrats, have gone to prison to await trial on charges of torture, abuse of office, and embezzlement. In addition, Tbilisi Mayor Givi Ugulava, once seen as a likely successor to Saakashvili, faces criminal charges on a separate case, though remains in office.

Ivanishvili, who insists that these prosecutions are not politically motivated, also has threatened to bring Saakashvili, whom he terms a “political corpse,” to justice for unspecified crimes he allegedly committed as president.

Few would expect the outgoing president to do anything but fight. Contrary to rumors about his likely departure abroad, Saakashvili has stated publicly that he intends to stay in Georgia, as part of the opposition to the Georgian Dream.

“One era of Saakashvili is over, “ Nodia said, but another, eventually, may be yet to come. “He has a legacy,” Nodia said. “But he also may have a future.”