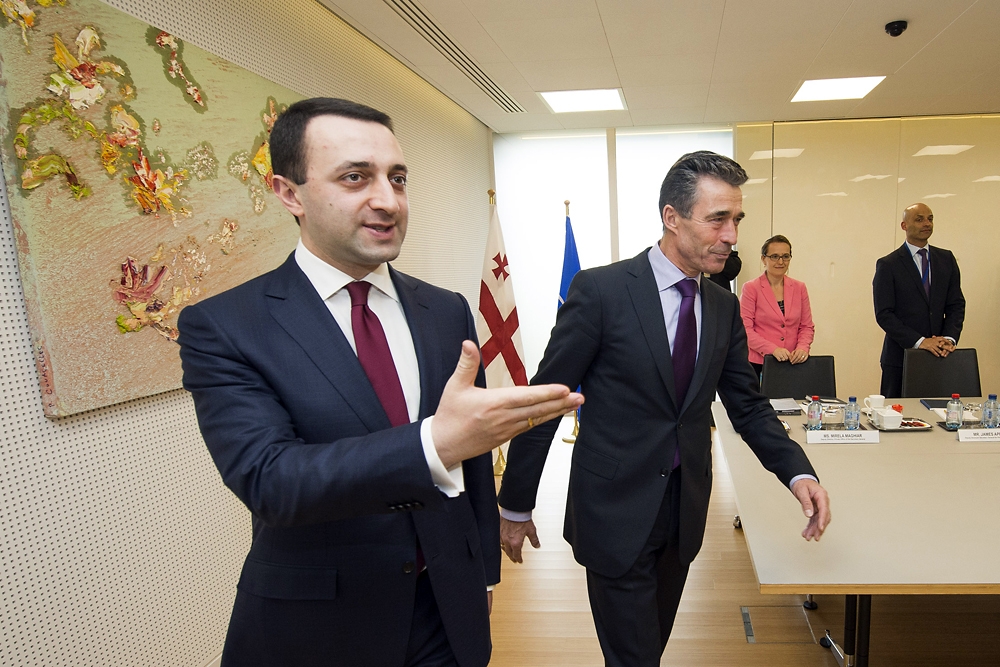 Is this the way to NATO? (Photo: NATO)

The Russia-Ukraine crisis is putting the South Caucasus country of Georgia on a faster track toward closer ties with the European Union; less clear are the implications of the Crimean standoff for Georgia’s bid to join the North Atlantic Treaty Organization.

Georgia expects to sign an association pact with the EU this year, and hopes move closer to full NATO membership by receiving a Membership Action Plan [MAP], or an alternative offer, at the alliance’s September summit in the United Kingdom. The standoff between the West and Russia over Ukraine may well determine whether and when Georgia reaches these objectives.

Georgian Defense Minister Irakli Alasania said Russia’s campaign in Ukraine creates a need for more decisive NATO policy in Eastern Europe. “Speeding up the process of Georgia joining NATO should be one of the essential elements of the new policy approach that will better contribute to ensuring [the] stability of the European and Euro-Atlantic area,” Alasania wrote in an emailed response to questions posed by EurasiaNet.org.

The Georgian government view, as reflected in Alasania’s comments, has some support in Washington. In comments made amid Russia’s move to occupy Crimea, US Senator Mario Rubio (R-FL), a politician widely viewed as a 2016 presidential contender, called for a renewed push for NATO membership for Georgia as part of a broad US response to Russian aggression.  Earlier, the US State Department openly endorsed granting Georgia a MAP in 2014.

Some prominent policy analysts note the issue of Georgia’s inclusion in NATO remains sensitive and that doubts among some Atlantic alliance members remain strong.

“When he was in Washington two weeks ago, [Georgian Prime Minister] Irakli Garibashvili was advised even by people here who support MAP, not to push the MAP issue too hard because there still was no consensus inside NATO that Georgia would get it,” commented Caucasus expert Thomas de Waal, a senior associate at the Carnegie Endowment for International Peace in Washington, DC. “The general advice was -- focus on the EU. But obviously, there is now a wave of support building here for the idea of giving Georgia MAP to protect against Russia.”

Sergi Kapanadze, a deputy foreign minister under former Georgian President Mikheil Saakashvili, contends that Western credibility is at stake: showing a strengthened commitment to Georgia on NATO membership would be one of the best ways to show Russia’s paramount leader Vladimir Putin that the West isn’t a paper tiger.

“Based on other situations, such as Syria, [Russian President Vladimir] Putin now feels that the West is weak and its warnings taper off without translating into something that can actually hurt Russia,” said Kapanadze. “If the West does not take real steps, such as expelling Russia from the G8 and making Georgia a NATO member, Putin will think he can get away with Ukraine.”

The main reasons for NATO’s hesitancy persist: Russia still maintains a military presence within the breakaway regions of Abkhazia and South Ossetia, and regards NATO advancement as an immediate threat.

Georgia’s ill-fated war with Russia in 2008 over the separatist territory of South Ossetia is a complicating factor. In addition, Russia has claimed undisputed Georgian territory as part of South Ossetia. Questions over how the 2008 conflict started are still a matter of dispute.
Given the Kremlin’s self-evident hostility to the notion of NATO advancement into the formerly Soviet space, though, Georgia’s acceptance into the Atlantic alliance could possibly goad Russia into engaging in brinksmanship, such as has been recently demonstrated in Crimea.

Georgia was pressing for a MAP well before the 2008 war. Tbilisi’s desire for NATO membership has remained steady since then. Following the war, NATO has called for additional democratization reforms. In Tbilisi now, some feel the Alliance is running out of excuses for postponing membership.

Alasania, for example, argued that the 2012 parliamentary and 2013 presidential elections, which resulted in a change of government, proved that “the country holds solid democratic credentials.” Similarly, Georgian soldiers, with intensive NATO trainings and experience from NATO’s Afghanistan mission under their belts, have a “great level of interoperability with the Alliance,” he insisted.

Georgia’s best bet may be that the Ukrainian crisis will inspire consensus and bold decisions within the Alliance, said de Waal. “But there is a lot still to play out in Ukraine,” he said. “If Putin de-escalates somewhat in Crimea, the French and the Germans could still make the argument that the priority will be to get him to recognize the new government in Kyiv and pull out of Crimea. Therefore, there is no point in making life with Russia even more difficult by giving Georgia a MAP. ”

Alternatively, he noted, if Russia becomes more aggressive in Ukraine, “then the argument will change to ‘Stop Russia at all Costs.’ Then, even the French and Germans will probably start thinking about [a] new ‘containment policy’ for Russia and be persuaded to endorse MAP for Georgia.”

Alliance members seem inclined to wait a little more before acting. “It is still too early to say what will be the potential impact on allied decision-making regarding Georgia,” said Bill Lahue, the NATO liaison officer in Georgia.

When it comes to the EU, Brussels is increasingly wary of Russian meddling in Georgia and is working to accelerate the signing of deals that will eventually make the country’s laws, economy and political system EU-compatible. The agreements, expected later this year, are subject to legislative approval by both the EU and Georgia, and require more reforms. But for the first time Brussels has hinted that its overtures to Georgia will not stop there.

When asked during his March 4 visit to Tbilisi about long-term relations between the EU and its Eastern neighbors, EU Commissioner for Enlargement and European Neighbourhood Policy Štefan Füle, citing a February 10 statement from the European Commission, the EU’s executive body, indicated that an association agreement is not “the final goal” for Georgia.

Kapanadze, who attended meetings with the commissioner, believes that Georgia is being encouraged to use its imagination to interpret such messages, which “internal differences” within the EU keep general.

Meanwhile, the EU is prepared to back its actions with cash. EU sources have indicated that Georgia could expect to receive 90 million euros (roughly $124.58 million) per year from Brussels for help with implementing the Association Agreement after its signature. That aid would be on top of 21 million euros ($28.8 million) for a transparency initiative, and 1.5 million euros ($2.06 million) for strengthening the Georgian parliament’s capacity. Though still very much a wink-and-nod affair, Georgian integration with the EU appears now to be a destination, and not just a process.