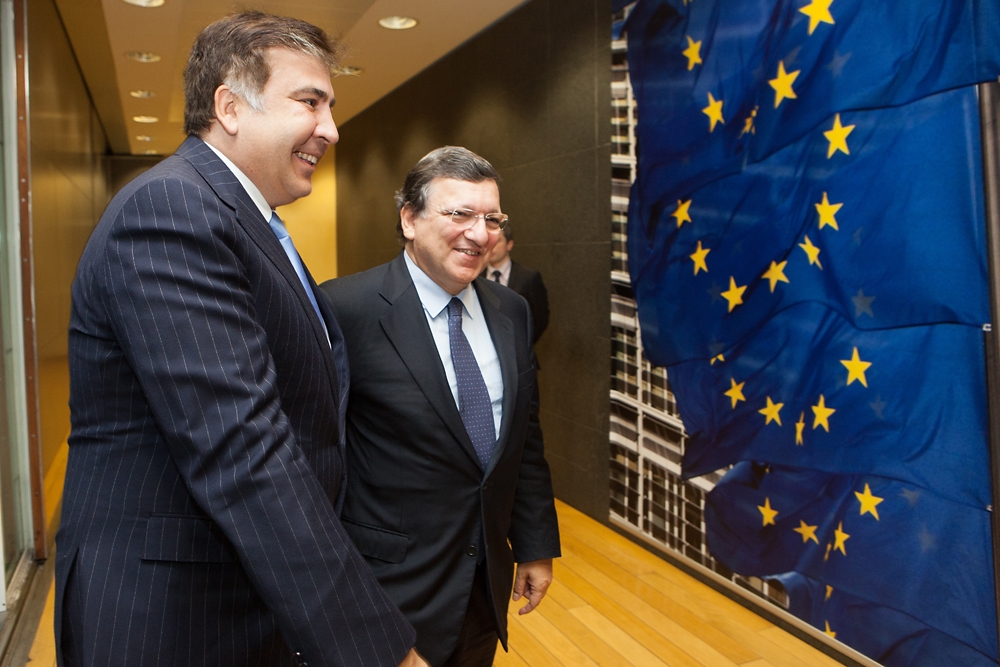 To the dismay of Russia, Georgia takes a step closer toward the EU. (Photo: European Commission)

For Georgia, the signing of an association agreement marks a major stride toward the European Union. But the pact should not be construed as an insurance policy against continued meddling by Moscow, experts say.

Russia’s opposition to EU attempts at fostering stronger ties with six formerly Soviet republics is well established. Georgia and Moldova were the only two states to shrug off Kremlin pressure and sign association agreements during an EU summit held November 28-29 in Vilnius, Lithuania. Moscow’s strong-arm tactics appeared to deter Ukraine and Armenia from cementing a closer relationship with the EU.

Georgia does not have the same reliance on Russia for energy and trade that Armenia and Ukraine do. But Russian leaders seem to believe they have some leverage on territorial issues. Officially, Tbilisi still strives to restore its sovereignty over two breakaway entities, South Ossetia and Abkhazia. In addition, Georgia wants to recover territory bordering South Ossetia that is now occupied by hundreds of Russian troops.

Since the conclusion of the 2008 Russian-Georgian war, Russian troops have erected an estimated 35 kilometers of barriers, unilaterally demarcating what Russia considers to be the “border” between Tbilisi-controlled territory and South Ossetia. Much of this barrier is located not in South Ossetia, but in areas that are internationally recognized as being Georgian territory. Moscow recognizes South Ossetia and Abkhazia as independent states.

On November 30, two days after Georgia initialed its EU association agreement, Russian fence-builders were back in action; this time, erecting a barrier through the districts of Kareli and Khashuri. Georgian media outlets reported that Russian troops also arrested two men in Khashuri for crossing the so-called “border” with South Ossetia.

In an interview with EurasiaNet.org, Deputy Georgian Foreign Minister Tamar Beruchashvili underlined that the association agreement is “not against Russia.” Even so, she predicted that Moscow will behave as if it is. “Of course, they are cooking up something,” Beruchashvili said.

Political observers in Tbilisi expect Russian pressure to intensify as Georgia moves to enhance and ratify the association agreement in the coming months. At the same time, some contend the Kremlin doesn’t have many cards to play. “I don’t think the Russians have any serious leverage,” said political analyst Tornike Sharashenidze. “We don’t depend on Russian gas, for example. Russia has already recognized and occupied our territories [South Ossetia and Abkhazia]. What else can they do?”

What some in Tbilisi worry about is not an expansion of coercive tactics on Moscow’s part, but the opposite; perhaps Russia’s best chance at slowing Tbilisi’s march toward the EU is through closer trade ties. Russia now ranks as Georgia’s fourth-largest trade partner (at $591.6 million), after Turkey, Azerbaijan and Ukraine, according to GeoStat, the official statistics agency. Trade during the first 10 months of 2013 compared with the same period last year has increased by 38 percent, or 6.9 percent of the country’s overall trade volume.

“If we become dependent on them, they will use it,” said noted political analyst Alexander Rondeli, referring to Russia. “Right now, they have nothing; only military force [to use against us].”

Georgians are closely following the ongoing mass protests in Kyiv over the Ukrainian government’s refusal to sign an association agreement in Vilnius. A small demonstration occurred in Tbilisi on December 1 in support of those Ukrainians rallying for economic integration with the EU over Russia. A similar event was planned for December 2.

To limit the risks posed by Kremlin opposition to Georgia’s EU ambitions, Burchuashvili, the deputy foreign minister, stressed that Georgia needs more “visible” support from “European and US partners.” It cannot, she added, assume the burden of economic and political reforms “alone.” The government has already called for a donors’ convention in Brussels, seeking outside assistance to implement EU-mandated reforms.

Any western support would come at a price. European diplomats have warned the Georgian Dream-led government in Tbilisi against taking perceived acts of political revenge against its predecessors, in particular cautioning against the prosecution of former officials from ex-President Mikheil Saakashvili’s administration, or of Saakashvili himself. Any criminal cases that are seen abroad as politically motivated could jeopardize Tbilisi’s ties with the EU, diplomats have said.

Burchuashvili stressed that Georgia understands the signals coming out of Brussels and Washington. “We know we have to develop ourselves as [a] modern, democratic country in this part of the world,” she said. “This is what our people want.”