Few took it seriously when Georgia’s ruling party promised to formally apply for EU membership in 2024. But then events pushed them to apply even earlier. Is Georgia ready? 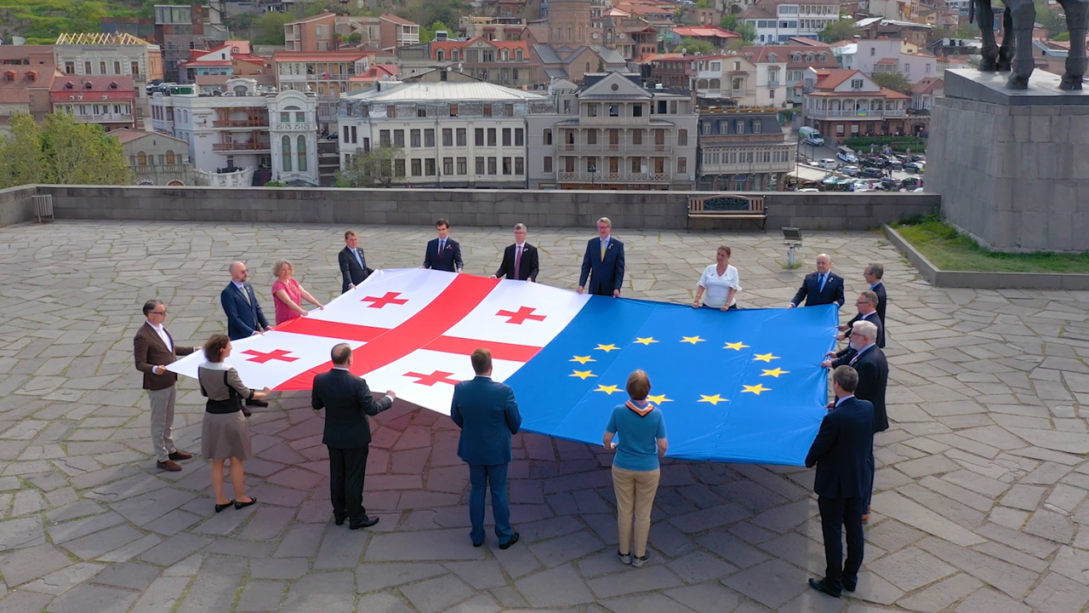 A celebration of Europe Day in Tbilisi. (photo: EU delegation to Tbilisi)

On May 10, Georgian Prime Minister Irakli Garibashvili formally handed over a seven-volume tome to the European Union’s ambassador in Tbilisi, Carl Hartzell. Together with another weighty document submitted a week earlier, they represent the Georgian government’s answers to the 2,600-point EU questionnaire covering the state of the country’s politics, economy and institutions and are meant to help assess its readiness to start the process of accession to the bloc.

Now, over the coming weeks, the European Commission will prepare its recommendations about whether Georgia should get formal status as an EU member candidate. The decision could come as early as a European Council summit scheduled for late June, though even if it does it would be years before Georgia would actually join.

But for advocates of Georgia’s EU accession, even being a candidate would have significant implications for the country’s development.

“Giving a membership promise doesn’t cost much for the European Union, but that would be important for us, for the civil society, to keep the leverage on the Georgian authorities,” Vano Chkhikvadze, EU Integration Program Manager at Open Society Georgia Foundation, said during a May 12 online discussion of Georgia’s EU prospects.

Georgia’s application to the EU – a body that is supposed to maintain high standards for the democratic credentials of its members – comes amid increasing doubts about the government’s commitment to those standards.

For years, Georgia was commonly seen as a “frontrunner” in the process of EU integration compared to other post-Soviet states, implementing economic and democratic reforms demanded by Brussels. Georgia signed an Association Agreement, including a free-trade deal, with the EU in 2014, and in 2017 got visa-free travel to the Schengen zone.

More recently, however, relations with the EU have become strained. The ruling Georgian Dream party campaigned for reelection (successfully) in 2020 on a promise to start the EU membership process in 2024. When the opposition contested the results of those elections, launching a deep, months-long political crisis, the EU stepped in and helped mediate a resolution.

But that agreement soon collapsed, and relations suffered further as the government failed to implement judicial reforms demanded by the EU and turned down an EU loan that was conditioned on those reforms.

The country’s reputation for press freedom declined as well, as the authorities looked the other way as far-right mobs beat dozens of journalists covering Pride events in 2021. That “cast a shadow” over relations between the bloc and Tbilisi, in the words of a group of European ambassadors to Tbilisi.

Tbilisi continued to attract the ire of Brussels by dismantling the State Inspectors Office, an independent oversight body, and making judicial appointments in contravention of European recommendations.

But then came the war in Ukraine. In the wake of Russia’s invasion, the EU encouraged Ukraine to accelerate its membership drive, along with two other countries that were generally on similar paths to membership: Moldova and Georgia.

This process “has to be seen as part of the EU’s response to the war in Ukraine, this is not a normal enlargement process, this is a deeply geopolitical one,” said Nicholas Cendrowicz, the deputy head of unit in the Directorate-General for Neighborhood and Enlargement Negotiations at the European Commission.

While the changed geopolitical circumstances are working in Tbilisi’s favor, some have worried that they come at an awkward time given the democratic backsliding of late. Many in Tbilisi noted with alarm that the European Parliament has given its formal backing to candidate status for Ukraine and Moldova but has yet to follow suit for Georgia.

While Georgia’s application will benefit from the fact that its economy is already “largely aligned with that of the EU” and the country has a “well-functioning public administration” and “very vibrant civil society,” it could suffer as a result of problems related to the independence of the judiciary and political polarization, Cendrowicz said during the May 12 discussion.

“The rule of law and the independence of the judiciary is absolutely crucial in deciding whether a country is ready to join the EU,” he said. “And what has happened in Georgia over the past couple of years has not strengthened that independence, I think on the contrary.”

That issue was highlighted on May 16, when a Georgian court sentenced Nika Gvaramia, the director of an opposition television network and ally of former president Mikheil Saakashvili, to three and a half years in prison on abuse-of-power charges. The conviction came at an awkward moment, when Foreign Minister Ilia Darchiashvili was starting a visit to Brussels to discuss the country’s EU application.

And while Georgia is far from the only country to suffer from political polarization, “in the accession context, we have to say that it’s important that the country is able to develop a consensus,” Cendrowicz said. “The political context in Georgia is not really conducive to having those kinds of normal bread-and-butter and boring discussions about some of the nuts and bolts of the accession process.”

Given the “deteriorating relations between Georgia and the EU” occasioned by the incomplete judicial reforms and political squabbling, “this window of opportunity might not have opened up without Russia’s invasion of Ukraine,” said Sonja Schiffers, director of the South Caucasus office of the German think tank Heinrich Boell Stiftung.