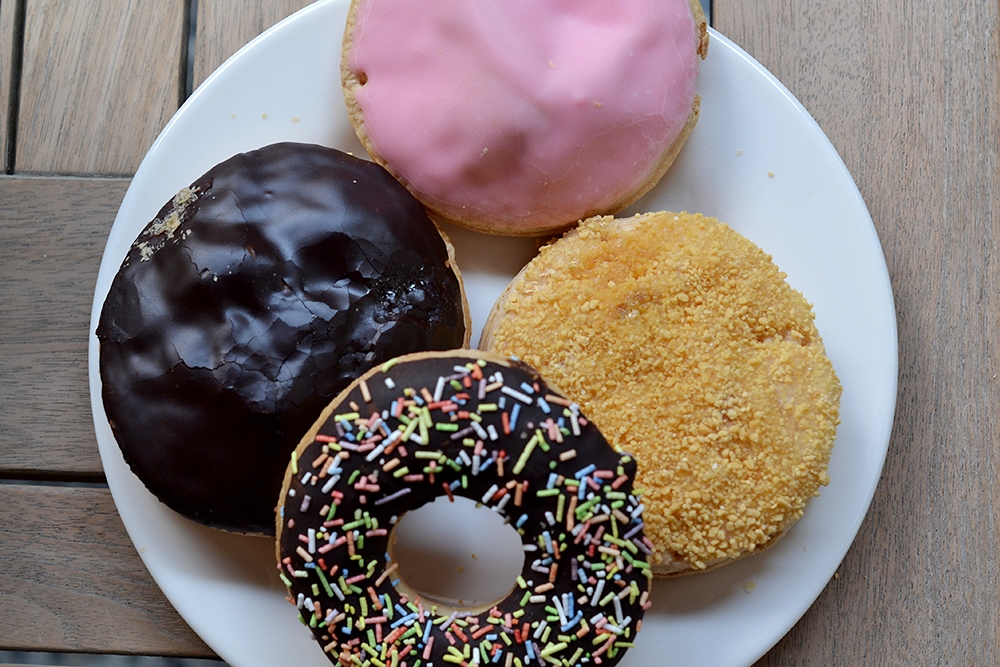 Georgians have developed a taste for fast food during the fasting period of Lent. The trend has highlighted a cultural paradox in this South Caucasus state, where Orthodox Christianity forms perhaps the main pillar of national identity.

Believers in Georgia are in the midst of observing Lent, the 40-day period of fasting prior to Easter. Trying to cater to the Georgian market, Dunkin’ Donuts, the Canton, Massachusetts-based pastry and coffeehouse company, has put Lenten doughnuts on its menu in Georgia.

This is not the first time the international chain has introduced region-specific doughnuts in some of its 3,068 stores outside the United States. But the strong positive reaction of customers in Georgia to the Lenten doughnuts has drawn attention not only to the country’s fascination with American brands, but also to the influence of Orthodox beliefs in society.

When Dunkin’ Donuts first opened an outlet in the Georgian capital, Tbilisi, on January 13 – complete with a ribbon-cutting ceremony attended by US Ambassador Richard Norland and Tbilisi Mayor Davit Narmania – a capacity crowd rushed in to indulge in the cloying sweetness of Apple Crumb and Boston Kreme doughnuts. Two other locations have since opened.

But Georgia’s well-established fascination with American culture comes paired with an equally strong devotion to Orthodox beliefs. Lent in this country of roughly 5 million is observed not just in the weeks preceding Palm Sunday (April 5, according to the Orthodox calendar), but, by many Georgians, throughout most of the year.

The arrival of “fasting croissant donuts,” with variations like “Bavarian Kreme, caramel, chocolate and double strawberry,” may not sound like an effective way to mark the season. But Lent in Georgia does not necessarily mean self-denial and abstinence; it often means simply switching to vegan variations of everyday staples – desserts, sausages and the omnipresent salad ingredient, mayonnaise.

“The fasting doughnut is a cultural paradox that says something about Georgian psychology today,” commented sociologist Emzar Jgerenaia of Tbilisi’s Ilia State University. “So, you formally observe the rules, even ardently so, without giving much thought to the idea behind them, which is about penance and self-restraint.”

That could make things easier for the growing number of American fast food chains in Tbilisi. Wendy’s, for one, is inviting customers to try its “fasting veggie chili” or “fasting veggie burger and baked potato.”

Not that nobody notices the irony. Amidst the general rave reviews of the Lenten doughnuts, one lone voice cried out on Dunkin’ Donuts Georgia’s Facebook page: “Have you no shame? Before, people almost starved themselves during Lent.”

The doughnut-loving “Pharisees,” as the woman termed them, hit back. “How is it a big deal if, after a hard day, I take my tea with a doughnut? Oh, it should probably be just stale bread. Sorry, my bad,” one user taunted in response.

The debate over the consumption of these Lenten doughnuts is rooted in the Orthodox Church’s towering role in Georgian society. “The Church carries a certain element of magic here,” Jgerenaia observed. “Many are convinced that if you do all the right rituals, fast, cross yourself several times a day, you can somehow get God on your side.”

The Soviet era “left Georgia with a top-to-bottom mentality, with a habit to rely on higher authority, and the Church easily stepped in, dictating behavioral norms,” including for food, commented Beka Mindiashvili, a theology researcher who runs the Public Defender’s Tolerance Center.

The Church has not yet commented on Dunkin’ Donuts’ fasting doughnuts. A spokesperson for the company’s Georgian franchisee did not respond to questions about the products or how it had adapted its standard recipes for Lent.

The Church, or at least some of its elements, used to be hostile to the internationalization of Georgia’s food market, noted Mindiashvili. In the early 1990s, it “had some grumblings about the idea of producing Coca-Cola here,” he recalled. “Coca-Cola stood for globalization and a globalized environment meant that the Georgian Church had to compete with alternative ideas on the market.”

But times have changed.

Tbilisi now contains well over a dozen American fast-food-franchise outlets. Unlike in the United States, many Georgians see a Dunkin’ Donuts, a KFC or a Subway as fashionable. McDonald’s, a popular site for Georgian children’s epic birthday parties, is not considered cheap, while a downtown Wendy’s almost ranks as a hipster hangout for 20- and 30-somethings.

“Many go to these places because they think it is fancy,” explained Davit Parulava, a recent university graduate. “Hipsters do not like to hang out in a sakhinkle [a restaurant that specializes in the traditional boiled meat dumpling, khinkali].”

Sociologist Jgerenaia sees a generational rift behind the Georgian love of Dunkin’ Donuts.

“For many, especially in the age group from 40 to 60, donuts [from Dunkin’ Donuts] are reminiscent of a ponchik [a Russian doughnut, associated with the Soviet era] and the world they knew and cling to. The ‘donut generation,’ if you will, or the younger people, have no memory of the USSR.”

Either way, the strongest motivation – even stronger than a Boston Kreme – is “their national identity, which is firmly steeped in Orthodox Christian values,” he said. “The market is aware of this; hence, the fasting doughnut.”