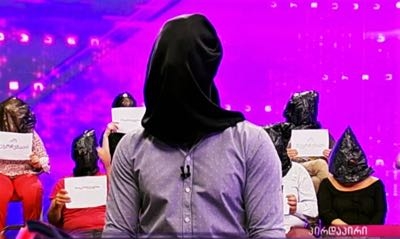 Many Georgians perceive the recent kidnapping of Azerbaijani journalist Afgan Mukhtarli from Tbilisi as a breach of Georgia's venerated hospitality traditions, on a par with an attack on free media and national sovereignty.

“This is not just a violation of international law and our own law, but also a crude violation of our traditions of hospitality,” said Nino Danelia, an assistant professor at the Caucasus School of Journalism and Media Management, during the June 6 broadcast of the Rustavi2 TV talk-show Archevani (The Choice). “This man came to us to seek help and we simply grabbed him and handed him over to his tormentors,” she alleged.

Critics charge that the Georgian government on May 29 helped or, at best, allowed neighboring Azerbaijan’s secret services to kidnap the 43-year-old self-exiled journalist, said to have been looking into Azerbaijani President Ilham Aliyev’s alleged business ties to Georgia. He currently is in pre-trial detention in Baku for three months on charges of alleged illegal border-crossing, smuggling and violently resisting law-enforcement.

Georgian authorities ardently deny any involvement in the affair, but officials’ contradictory responses and the lack of detailed information after more than a week of investigation into Mukhtarli’s abduction have not built public trust in their assurances.

The much-sung rule that a guest must be safe under a host’s roof still runs strong across the Caucasus and many Georgians feel a collective responsibility for guests to their country. From cultural figures to ordinary Georgians, on TV and in the streets, many are saying that the governments of Azerbaijan and Georgia should’ve known better than to breach this sacred principle.

“What if they kill him? What are we going to tell his wife?” asked shopkeeper Medea Aslamazishvili as a group of women and she watched news reports about Mukhtarli in her convenience store in Tbilisi’s Saburtalo district. “This is medieval! What kind of Georgian would give his guest, no matter who he is, to an enemy?” an elderly male customer commented to Tamada Tales. “I don’t care if [government officials] are corrupt or greedy or whatever, but this time they’ve gone too far.”

In an apparent attempt to defuse the crisis and clear the government’s name, Georgian Prime Minister Giorgi Kvirikashvili suggested granting Georgian citizenship to Mukhtarli’s wife. Mustafayeva, a journalist who lives in Tbilisi, dismissed the offer. “Let’s not make a spectacle out of this,” she said, local media reported.

Mustafayeva asked that, instead, the Georgian police do their job and reveal what happened to her husband.

As Archevani host Giorgi Gabunia pointed out on his show, the abduction took place in the very heart of Tbilisi, around the corner from such key government offices as the foreign ministry, State Security Service, the government chancellery and the former parliament. “This area is loaded with security cameras and security guards,” Gabunia said.

“I condemn the opening of a corridor of torture from Georgia to Azerbaijan… our Azerbaijani colleague was taken down this corridor to face years of prison and torture in Azerbaijan,” On.ge Editor-in-Chief Tazo Kupreishvili declared on Archevani.

To demonstrate solidarity with Mukhtarli, whose kidnappers allegedly hooded him with a bag, Gabunia and his journalist guests wore black bags over their heads during the show.

That cost them one potential source of information.

Georgian Deputy Interior Minister Shalva Khutsishvili declined to respond to Gabunia’s questions so long as he was wearing a bag over his head. The show host refused to remove the bag and the deputy minister, appearing remotely, eventually disconnected his mike and moved off-camera.

Archevani has its own reason to state that Mukhtarli’s case shows that Georgia is no longer a safe and free place for journalists. An ardent government critic, Rustavi2 is caught in a legal battle over ownership that it describes as a covert attempt at a government takeover.

But the black bags are not just a Rustavi2 gimmick.

Earlier the same day, journalists wearing black bags and carrying signs proclaiming “You won’t get away with it.” flash-mobbed a meeting of parliament’s human rights committee. The act prompted a fierce exchange among deputies.

Committee Chairperson Sopo Kiladze acknowledged the gravity of the Mukhtarli case, but advised waiting for the investigation’s results rather than turning things “into a show," Radio Tavisupleba reported.

At this point, no sign of how long there may be to wait.