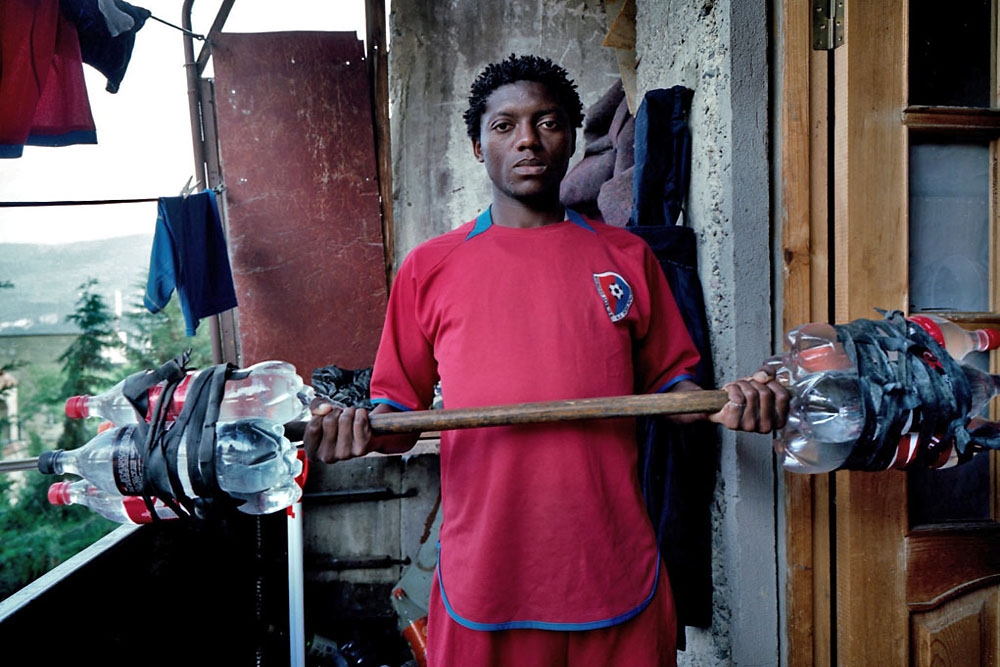 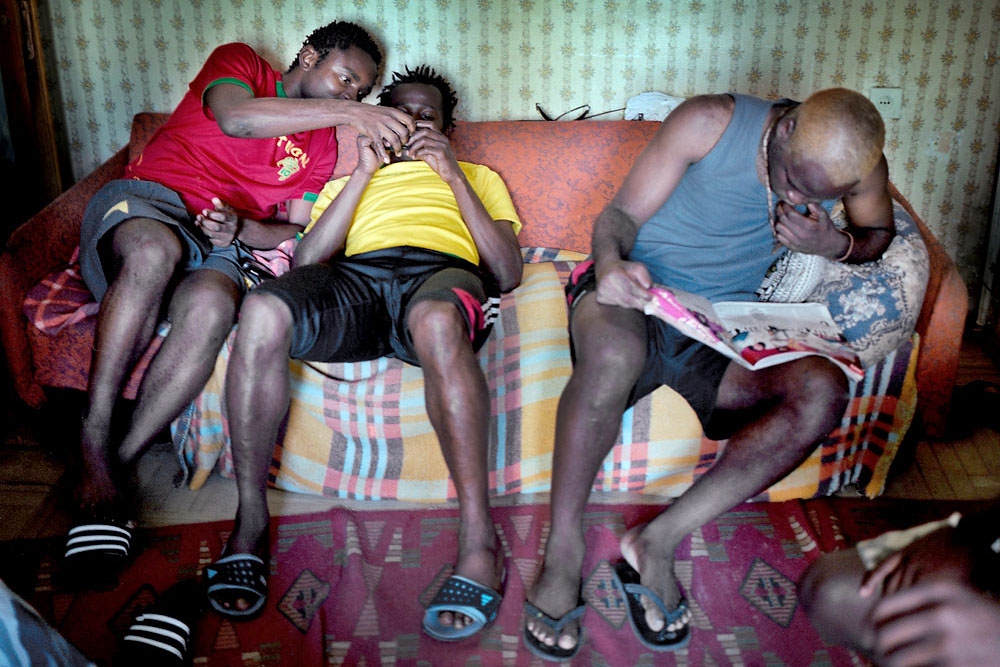 Starting and finishing the day with training, the players have no money to go out and often no money to eat. 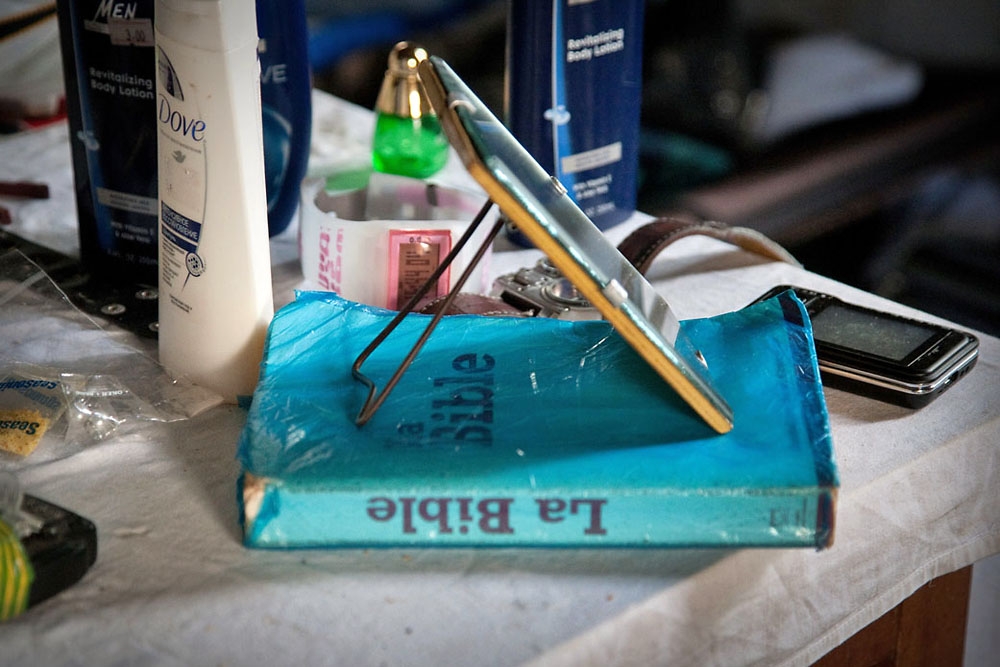 A bible sits on a table in the bedroom shared by 10 men sleeping in bunk beds. 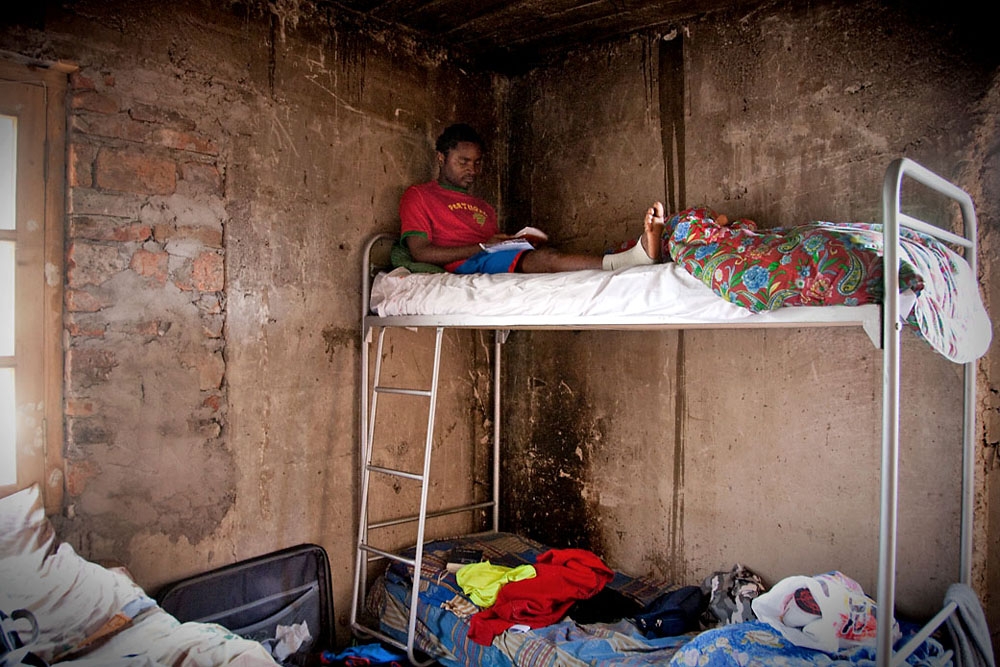 Mbatalla Lucas, who came to Georgia in early December 2011, reads in his shared bedroom. 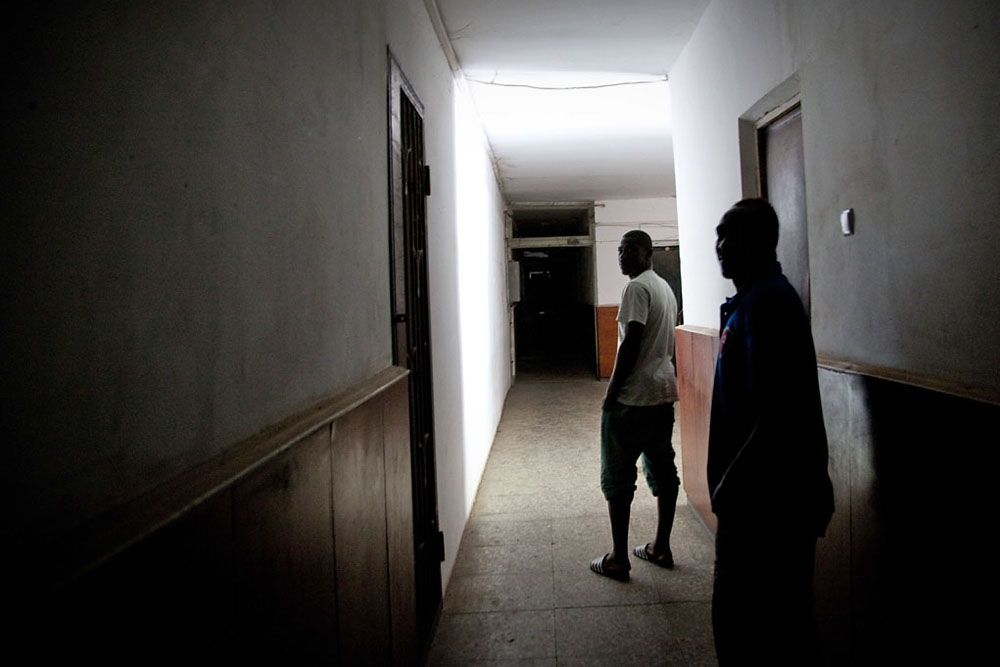 Two players visit the former Tbilisi velodrome stadium, which was the first place they lived when they came to Georgia. 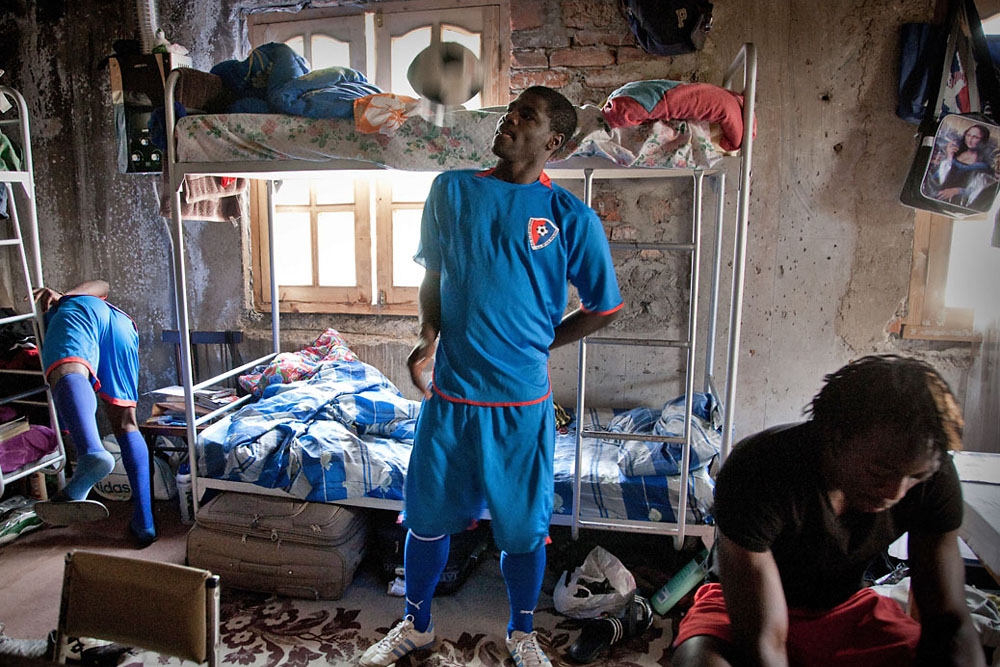 Zorowa Clovis Ndeta plays with a ball in his bedroom as others get ready for the evening training. 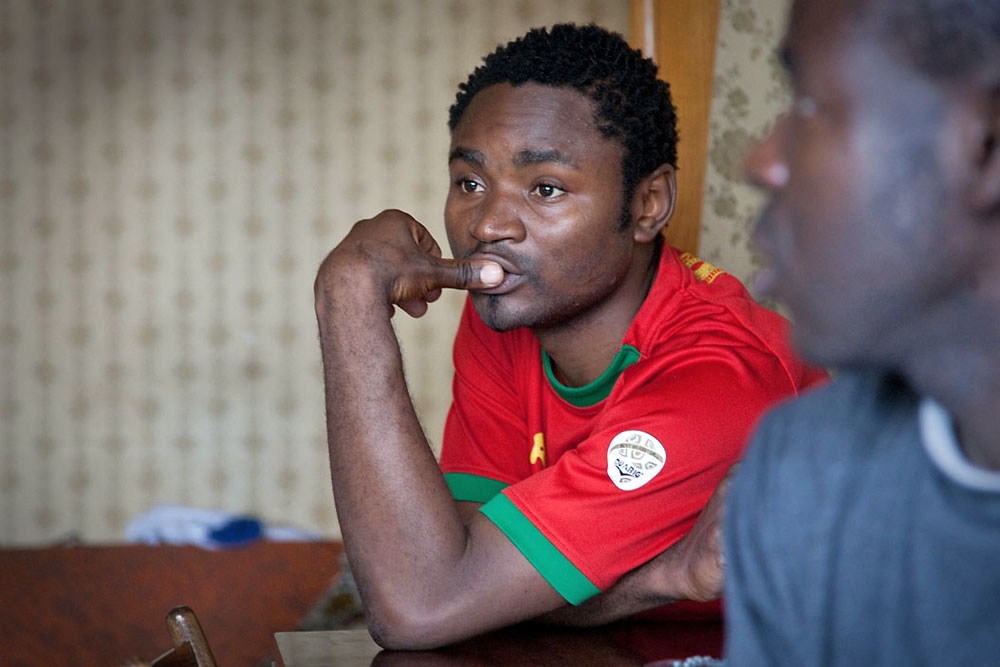 Mbatalla Lucas arrived in Tbilisi early December 2011 along with a larger group of players. 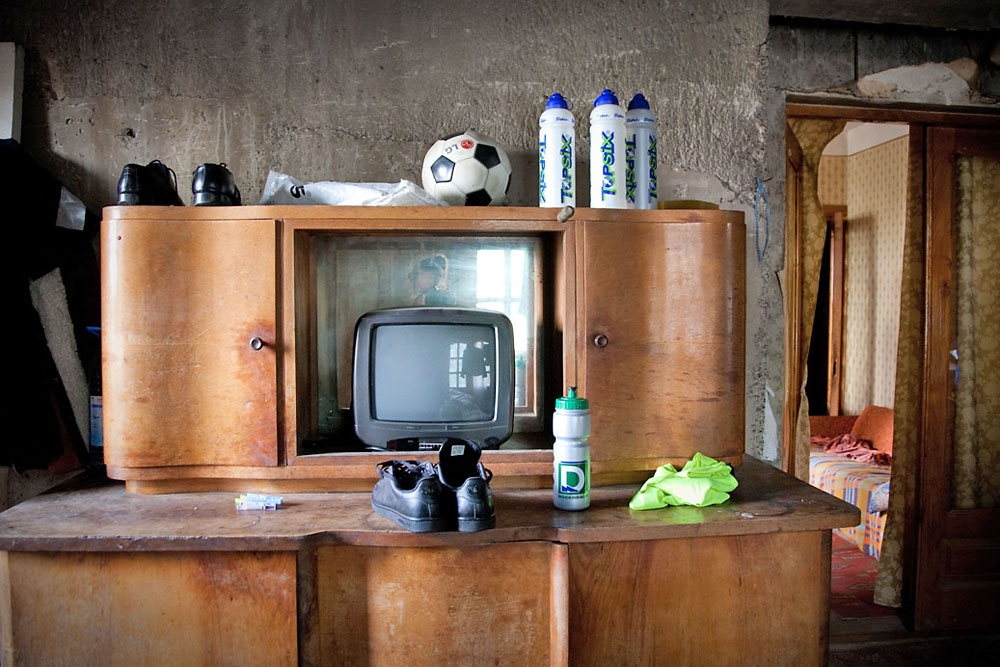 The two-room apartment rented by the 10 Cameroonian football players has just basic furniture. 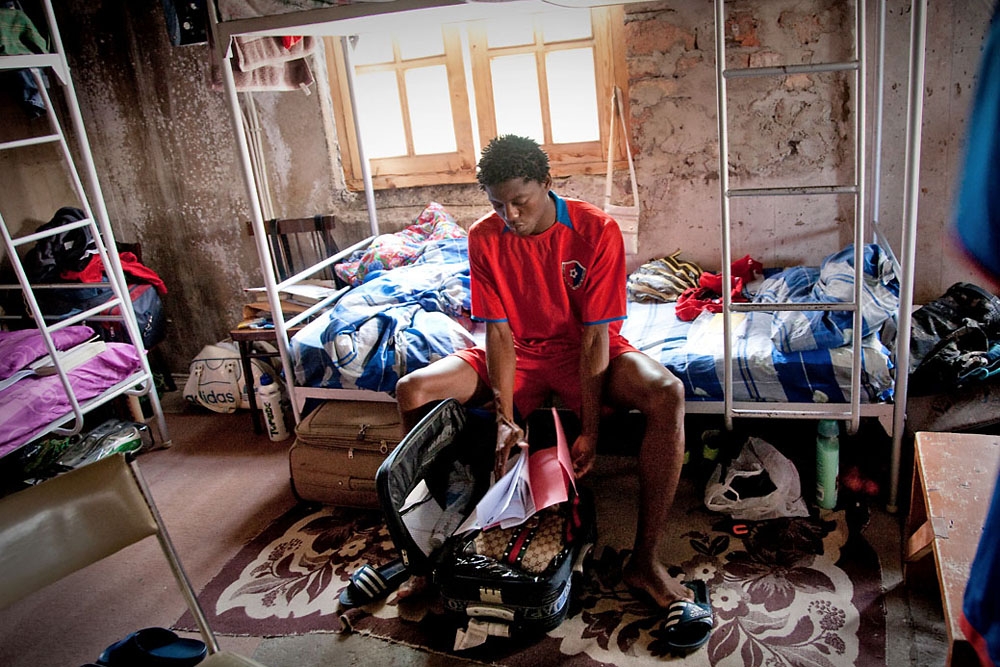 Datchoua Nemale Olivier looks through the one bag where he keeps his personal possessions. 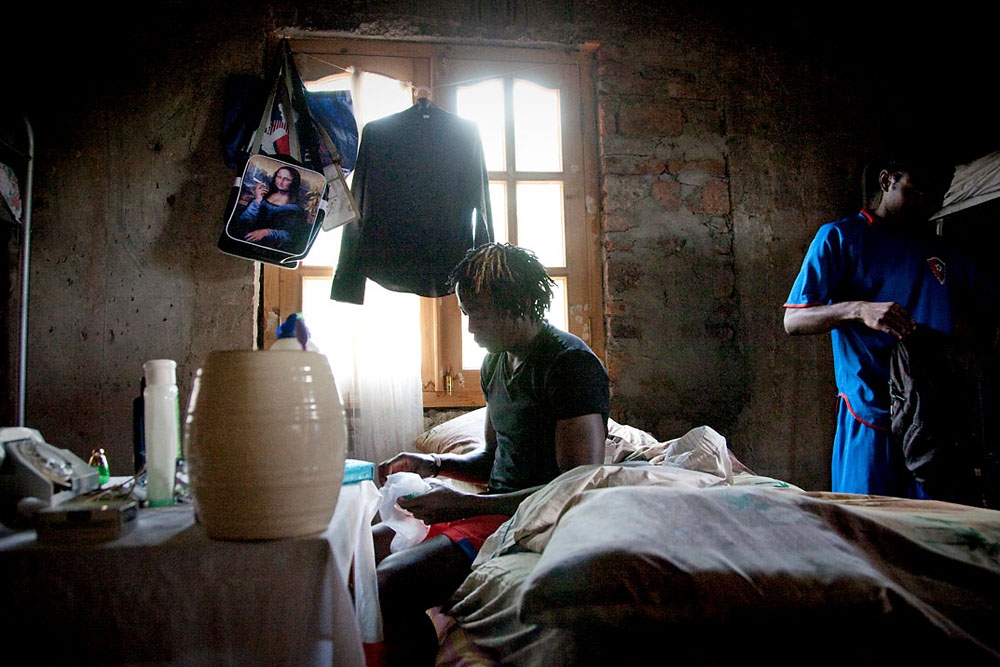 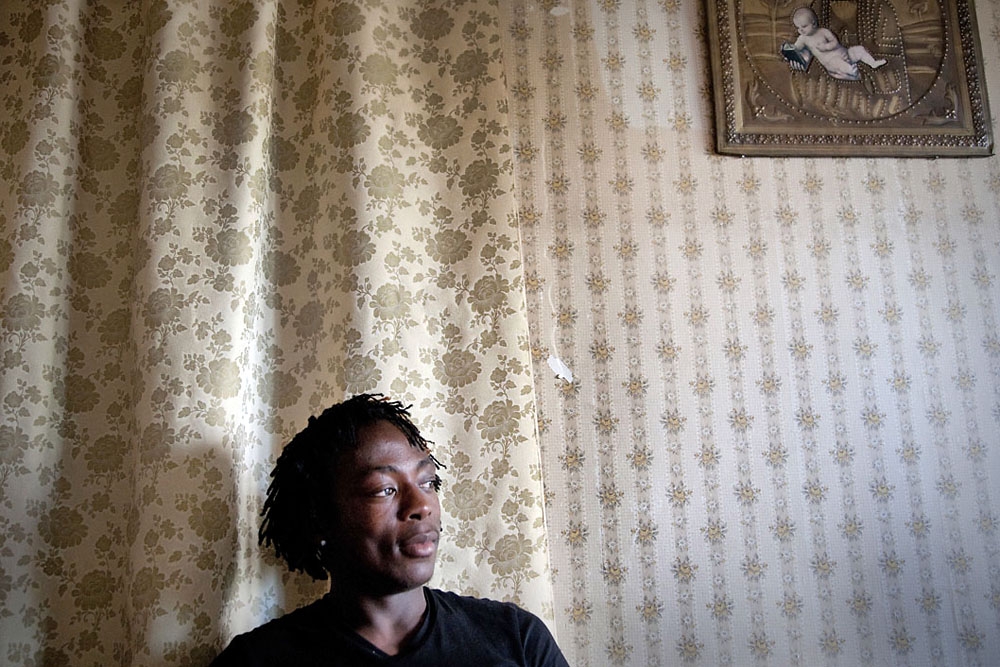 Edimo Molly Richard's dream is to become a professional football player and remove his family from poverty. 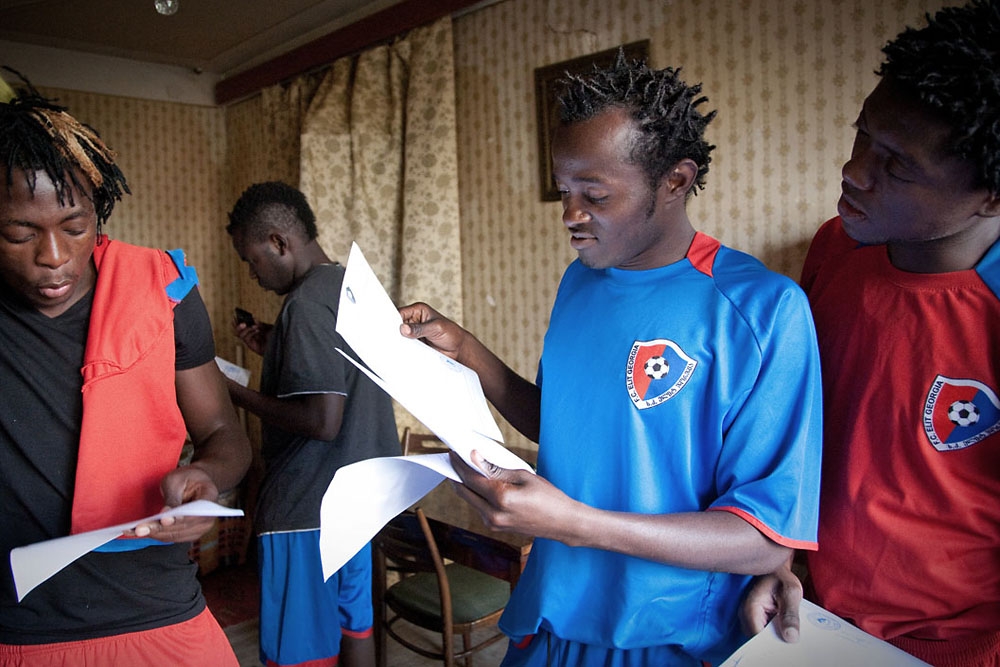 Players happily read documents that allow them to seek a contract with any other team in Georgia. 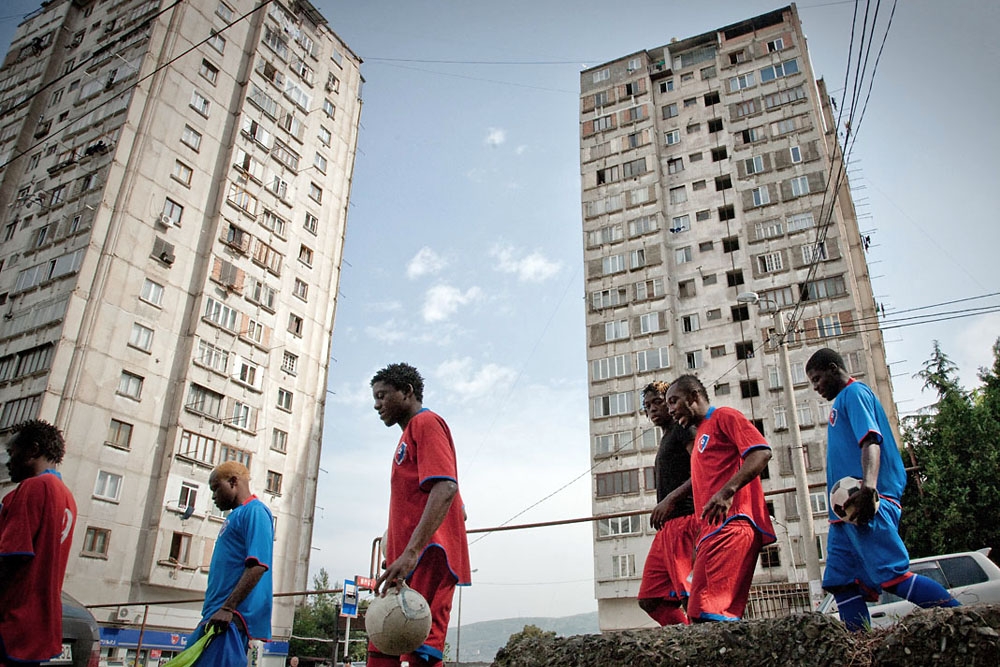 The Cameroonian players walk to a nearby school stadium, where they train each day. 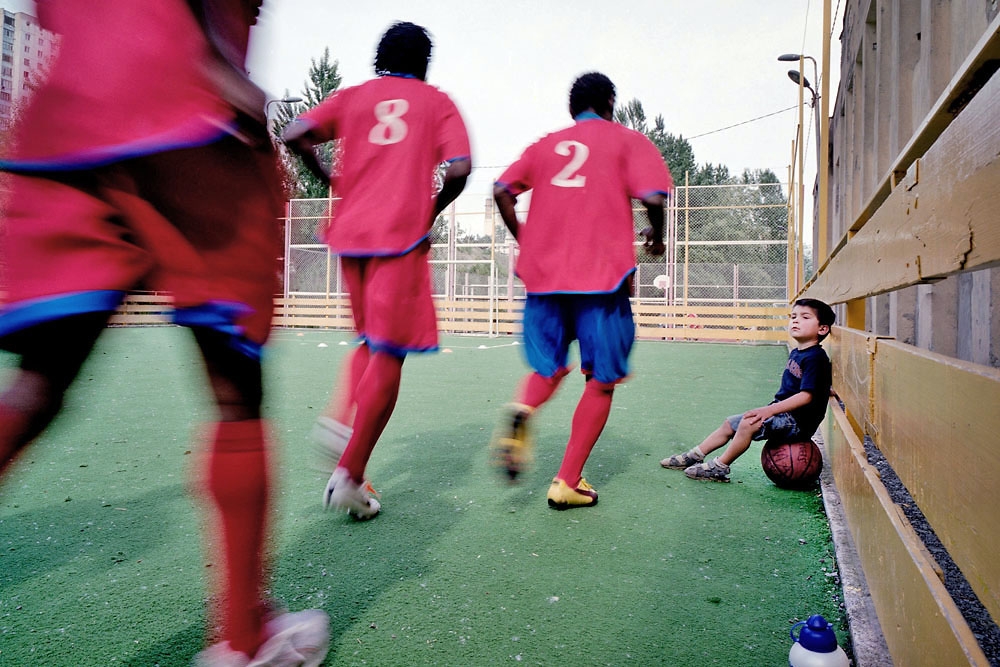 A Georgian boy watches the Cameroonian players warm up for their one-hour evening practice. 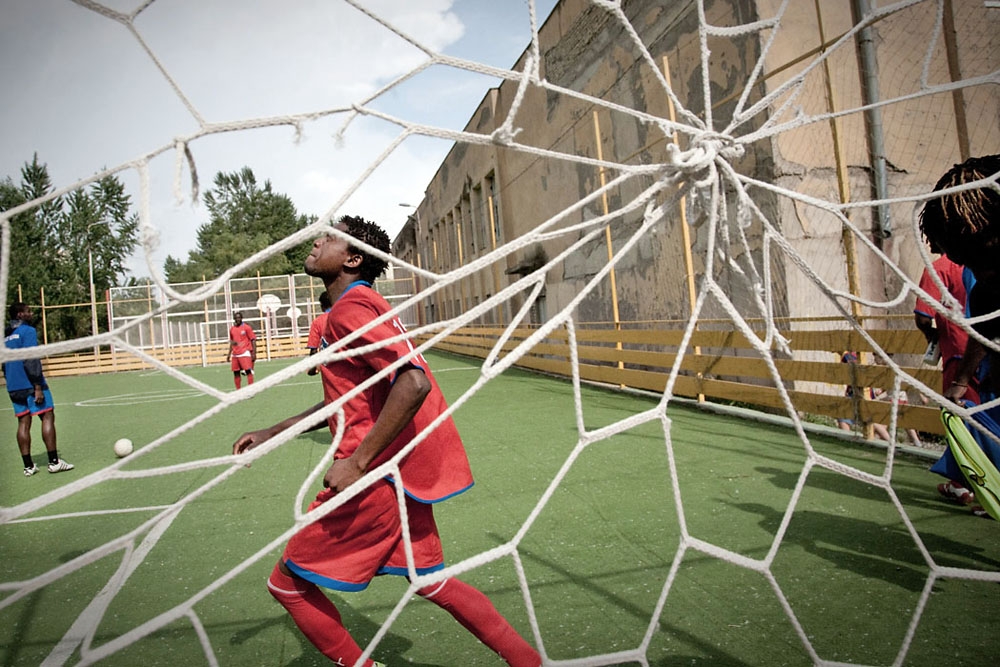 Many of the players who arrived in Georgia had previously played for Cameroonian youth national teams. 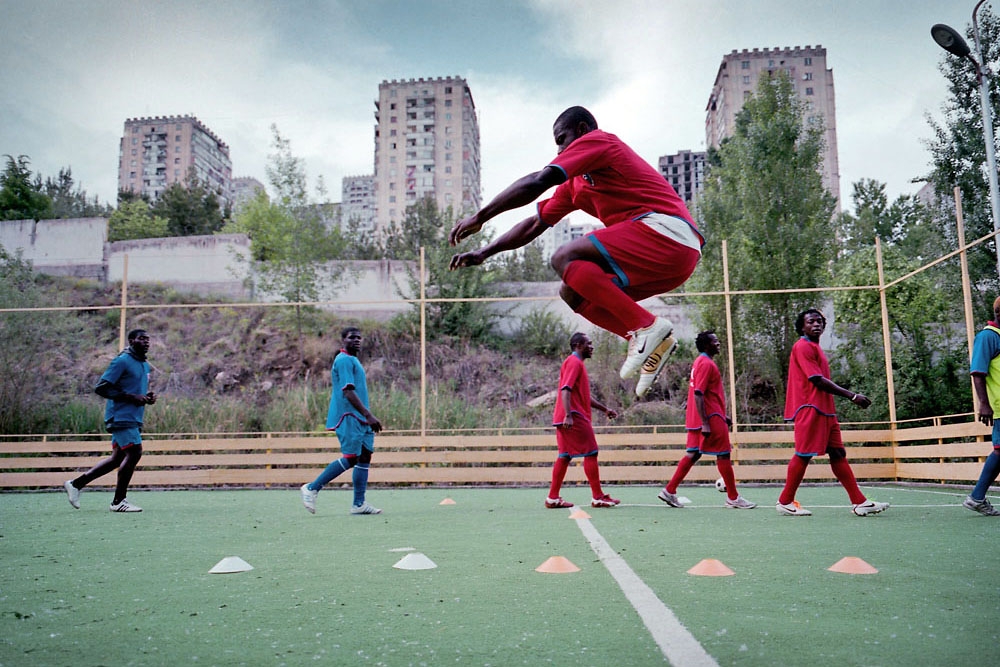 The director of a local school agreed to let the players train on the school's sports field. 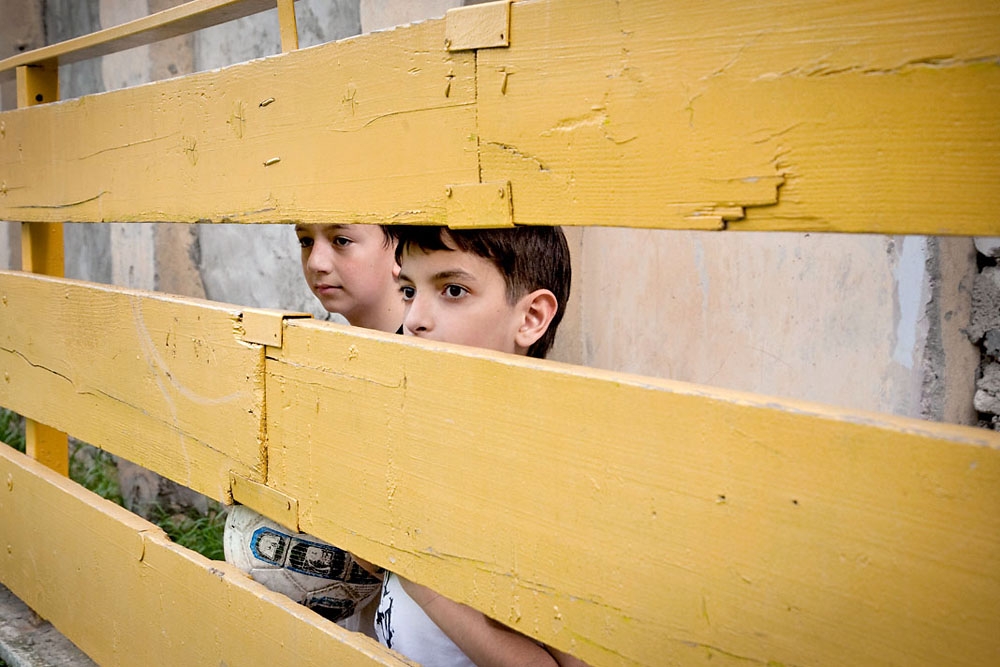 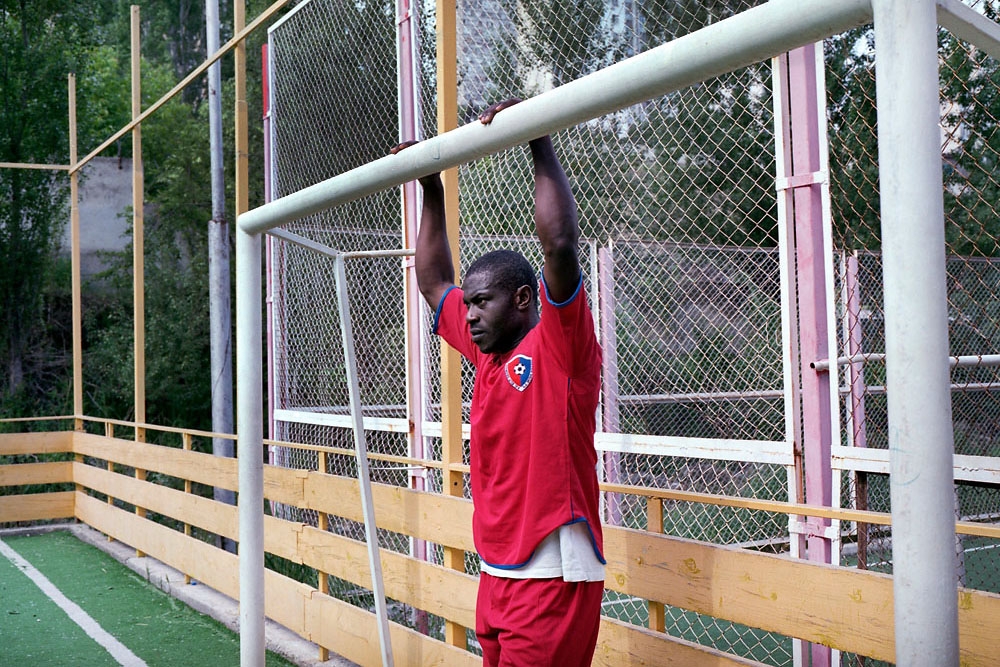 Nyengue Isaac Adelar, who played on the Cameroonian under 23 national team, was the last player to arrive in January 2012.
prev
next

Twenty-year-old Issac Nyengue, a defender from Cameroon, a football hotbed in Africa, was looking for a little payday and a chance to gain valuable experience in what he thought was a professional European league. So he seized on an opportunity to go the South Caucasus country of Georgia, which aspires to host the 2020 European Football Championships. But instead of performing for a team in Tbilisi, Nyengue alleges he got played.

Nyengue recounted that he had to fork over $1,040 this past January for the opportunity to join FC Elit, a Tbilisi-based team he believed was in Georgia’s second division. “The owner of the team picked me up at the airport and said, ‘Welcome to Georgia,’” Nyengue said. “He took me to a flat and I knew something was wrong. It was like something from a Cameroonian village.”

The flat that housed FC Elit’s African players, according to Nyengue, was in the Tbilisi velodrome, a dilapidated Soviet-era facility that no longer hosts bike races, and which also sheltered Internally Displaced Persons. “When I walked in, there were 10 guys sleeping in a single room. There was no heater,” Nyengue said.

The ambitions of FC Elit’s owner, Guga Babashvili, may not have been matched by the amount in his checkbook. It appears the club’s professional status was never firmly established. According to officials from the Georgian Football Federation (GFF), the club never paid its 2,000 lari ($1,200) registration fee.

In all, 11 Cameroonian football players came to Georgia, starting in August of last year, hoping to jumpstart their professional careers. But before they could make it on to the playing field, they had to shell out some coin. On top of picking up the cost of plane tickets, some paid their agents up to $2,500, or wired half of that amount directly to Georgia for the opportunity to play with FC Elit. They also claim they were hit up after arrival for $1,000 supposedly to pay for additional fees and expenses.

Those players who could afford to do so paid the cash. “When my brother called me from Tbilisi and told me he needed money to play football, I thought, ‘What kind of team is this?’ Tell me, where in the world does a football player need to pay to play?” asked Patience Songue, whose brother, striker Martin Songue, paid the requested $1,000.

The players say their contracts guaranteed them housing, food, pocket money and health coverage. In reality, they claim they often went days without food. Meals would appear only when another player had been recruited, they alleged. Otherwise they eat mostly bread and water.

“You know it’s bad when you look at a cat or a pigeon and tell yourself ‘I could eat that,’” said 21-year-old Reginald Essemi, a left-winger. One local baker gave them free bread; other neighbors offered food and bedding.

Babashvili, FC Elit’s owner, contests the assertions made by the players. He acknowledges that players paid some money, but denies that they were housed at the Tbilisi bicycle track. He also says the team is now registered with the Tbilisi Football Federation, an amateur confederation. Babashvili’s former business partner, Oswald Nkhono, a native of Cameroon who now lives in Tbilisi, denied taking money from players. He also said that Babashvili “handled all the financial transactions.”

One of the 11 Cameroonian players has returned to his native country. The 10 who remain in Georgia face an uncertain future. Although they have received release documents from Babashvili, the chances that any of the 10 can catch on with another Georgian club are slim. A major barrier is the hefty fee, as high as 15,000 lari (almost $9,000), that a club must pay to the GFF in order to place a foreign player on its roster.

GFF representatives are aware of the players’ plight, but say there is little they can do. “If anything is illegal, it’s police business, not the federation’s,” said Irakli Nakaidze, head of the GFF transfer department, which oversees the employment of foreign players on Georgian teams. “The relationship between the player and the club is theirs.”

A representative of the Georgian mission of the International Organization of Migration said that if players came to Georgia under misleading pretenses, then the national football associations should feel an obligation to get involved. “I believe there should be a campaign jointly with the government, football associations, and perhaps NGOs that provide aid to those players that need it,” said IMO program coordinator Marc Hulst.

First Deputy Interior Minister Ekaterine Zguladze told EurasiaNet.org that the ministry was not familiar with the Cameroonian soccer players’ case, but noted that they could petition the Interior Ministry for assistance with returning to Cameroon, request “case compensation” from the General Prosecutor’s Office, or file a lawsuit against FC Elit owner Babashvili.

Reluctant to trust anyone, the soccer players see none of those options as a viable way forward. They have not turned to the police for help because, in their experience in Cameroon, law enforcement is corrupt. Nor do they have the funds to finance a lawsuit. And returning home would be humiliating since their families made many sacrifices to pay the fees to get them to Georgia, they say.

The athletes’ experience highlights a broader issue involving Africans who travel to Georgia seeking career advancement, only to end up getting burned. For example, advertisements in countries such as Nigeria tout vocational courses in tourism management with vague promises of later employment. One such school required students to hand over $1,500 each for tuition and fees, but proved to be only an empty classroom with six desks and one teacher.

First Deputy Interior Minister Zguladze says such cases have diminished in number since the ministry began scrutinizing visa applications from African travel agents for study at Georgian vocational schools. “If … we see that it is a cheap, little private office applying for visas for five people a year from somewhere like Nigeria, we automatically deny the applications,” she said.

Nigerian Sylvester Chinyelugo, a Tbilisi State University doctoral candidate in international affairs, says the pattern of victimization begins in Africa, where prospective migrants don’t educate themselves about their intended destinations before they leave home. “People come here expecting to go to America,” he said. “They don’t know what they are doing, or where they are.”