Tbilisi was previously planning to apply in 2024, after further reforms. But domestic political pressure, and apparent positive signals from Brussels, has sped up the process. 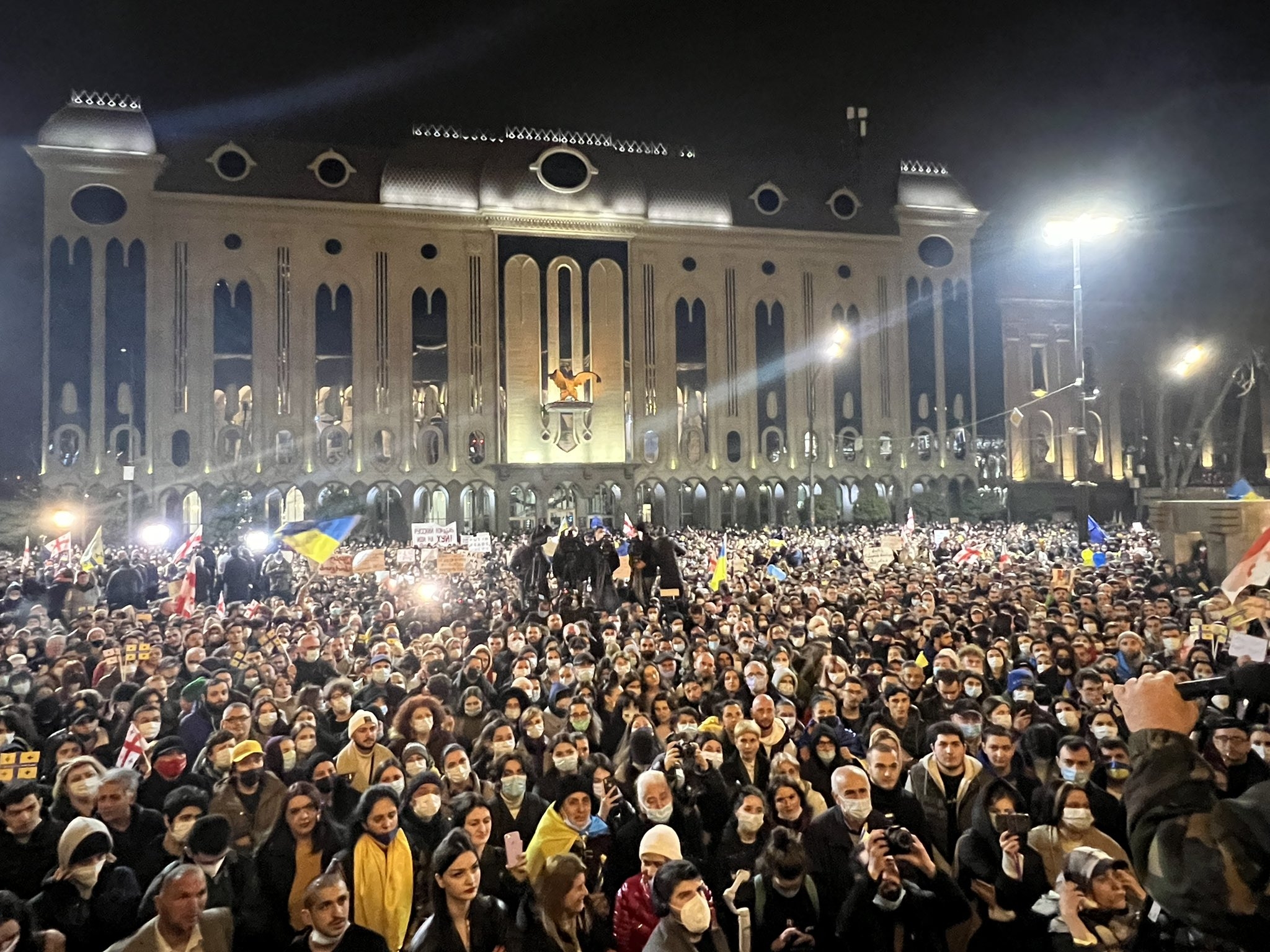 Following on Ukraine’s heels, Georgia will submit an application to become a member of the European Union, the country’s ruling party has announced.

Prime Minister Irakli Garibashvili signed the formal application on March 3. “We call on the EU bodies to review our application in an emergency manner and to make the decision to grant Georgia the status of an EU membership candidate,” said Irakli Kobakhdize, the chairman of the ruling Georgian Dream party.

The move comes amid mounting controversy over the Georgian government’s passive response to the Russian invasion of Ukraine. Tens of thousands of Georgians have been gathering nightly in Tbilisi to express solidarity with Ukraine and to demand a stronger response from their government, which has said it won’t join international sanctions against Russia.

“It is the people who have emboldened the government,” said Kornely Kakachia, the head of the Tbilisi think tank Georgian Institute of Politics. The government’s attempts to distance from Ukraine “made their position weak, both internationally and in Georgia,” he told Eurasianet. “They had to do this.”

Georgia’s announcement follows a similar move by Ukraine, which has been in roughly the same stage of EU integration as has Georgia. President Volodomy Zelenskiy signed a formal application on February 28, and the next day addressed the European parliament from Kyiv via video conference. "We are fighting to be equal members of Europe," Zelenskiy said. “Prove that you are with us.”

Until very recently, Georgian officials have been dismissing calls to try to accelerate the EU application process. It had previously promised to initiate the application in 2024, after implementing further reforms, and earlier this week had been sticking to that timetable. “A hasty initiative could be counterproductive because we have to satisfy certain terms over the [next] two years,” Kobakhidze said on March 1.

The chair of the Georgian parliament’s foreign affairs committee, Nikoloz Samkharadze, made similar comments the same day but then the next day changed his tone, saying that some “signals” had been received in Europe.

“No one will have the illusion that today Ukraine, Georgia or Moldova is ready for membership. Of course not,” Samkharadze told reporters on March 2. “It is just that we are receiving some signals from Europe against the background of this complicated situation in Ukraine and the Russian aggression, which can be used to accelerate the adoption of this status.

It’s not clear what signals might have been sent, but President Salome Zourabishvili recently visited Paris and Brussels, where she met European Council President Ursula Von Der Leyen among other officials.

The government changed its mind on the EU application “considering the overall political context and the new reality, based on consultations with the party’s political council members and first of all, the prime minister,” Kobakhidze said on March 2.

“Just two days ago [on March 1] they were on the defensive, saying they will do the application later,” Kakachia said. “But yesterday they changed their tone. If they didn’t have some positive information they wouldn’t dare to do that.”

What happens now is not clear.

”I do hope that the European Council will finally endorse the European perspective of Ukraine, Georgia, and Moldova, which it has been withholding for too long,” said Sonja Schiffers, the director of the South Caucasus office of the German think tank Heinrich Boell Stiftung.

Still, Schiffers cautioned that the prospect of EU membership for Georgia remains distant. “The accession procedure is a complicated political, legal and technical process, so it is unrealistic to expect a full accession anytime soon,” she told Eurasianet.

Georgian signed an Association Agreement with the EU in 2014, and the two sides have since been working on the implementation of the reforms that Tbilisi promised to enact under that agreement. The most recent progress report from the EU said that Georgia “continued steadily on its European path” but that “important challenges remain,” in particular on stalled judicial reform promises.

“Generally, the tone of the EU has always been, please first implement the Association Agreement comprehensively and then we can see what other things we can offer you,” Schiffers said.

But launching the accession process could encourage those reforms, she said.

“As long as the Georgian government does not take credible steps towards democratization, or even takes steps backwards, it will be difficult to move beyond symbolism and truly get and advance on the path of accession,” she said. “Opening the accession procedure would give the European Union more leverage to press for reforms in Georgia, which would be beneficial for both sides.”

When Maka Bochorishvili, the chair of the Georgian parliament’s EU Integration Committee, posted on Facebook about the government’s intention to formally apply, one German member of the European Parliament left a pointed comment. “Ok, then behave also in a European way to conduct policy making - and this message is directed to all relevant stakeholders,” wrote the MEP, Michael Galler.