Critic: “The movie will go away as quietly as its characters walk on and on.” 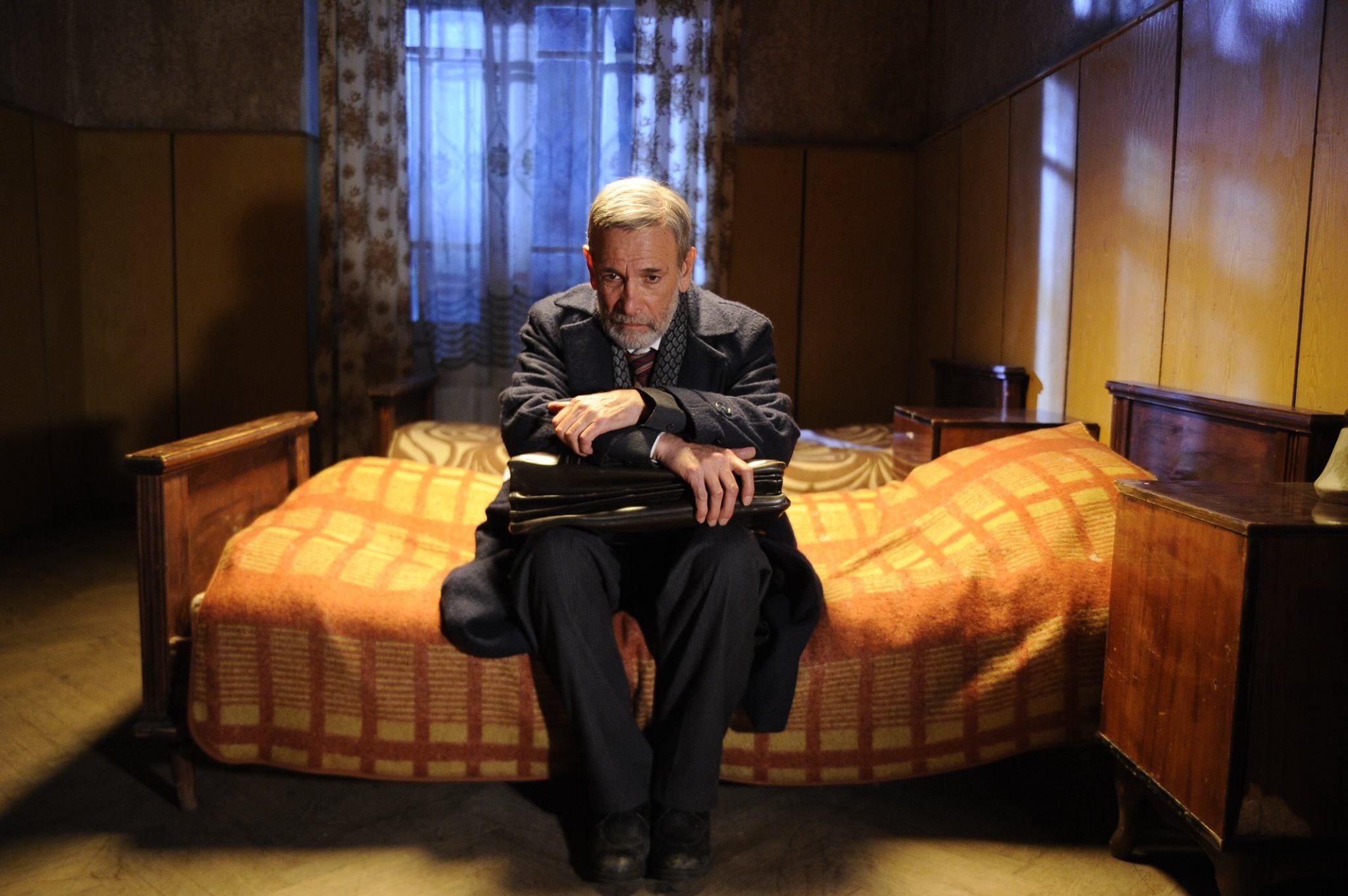 Deserted by friends, pursued by his enemies, with reality escaping his grip, Georgia’s first post-Soviet president, Zviad Gamsakhurdia, is portrayed as a King Lear-style character in a new biopic exploring the final days of the leader whose legacy remains controversial.

The film, “Khibula,” was directed by one of Georgia's most prominent filmmakers, Giorgi Ovashvili, whose earlier films “Corn Island” and “The Other Bank” gained both popular and critical acclaim. But his latest work is a disappointment to many in Georgia: a major complaint is that it doesn’t meaningfully explore modern Georgia’s painful birth and Gamsakhurdia’s role in it.

Gamsakhurdia is variously seen as a national leader who championed independence from the Soviet Union, a democratically elected president unseated by a putsch of militant goons and arrogant intelligentsia and/or a nationalist radical who promoted a poisonous obsession with the ethnic purity of the Georgian nation. The scars of his tenure in power remain visible today.

“Khibula” portrays Gamsakhurdia for the most part uncritically: as a noble, unfortunate man from a Greek tragedy, a hero-turned-fugitive in his own, once-adoring nation. “We have a tendency to mythologize our history and this film is also a bit of a heroic epic,” said art critic and popular social commentator Teo Khatiashvili in an interview with Eurasianet.org.

Once a firebrand Soviet-era dissident, Gamsakhurdia barely served eight months as the president of newly independent Georgia. He was overthrown in the early days of January, in 1992. His narrow escape from rebel forces ended a civil war that left country torn and emotionally scarred, the center of capital Tbilisi charred and pockmarked with bullets.

Gamsakhurdia returned from exile a year later to rally supporters against the government of Eduard Shevardnadze. Defeated again, Gamsakhurdia was forced to flee to the mountains of western Georgia, where he met his death in a village of Khibula. Whether his death was a suicide or murder remains a lingering question, which “Khibula” does not attempt to answer.

The film follows the late president’s final, doomed attempt to reclaim power. Clutching a briefcase and with a handful of loyal men in tow, the fallen leader wades through forests and ice-cold rapids throughout the movie. The president’s small coterie doesn't have the heart to point out the futility of his quest to be restored to power. Instead, they try to boost his spirits with stories about sparks of rebellion flaring up here and there. Only his prime minister has the courage to offer the bitter truth: “You lost the war, Mr. President.”

The film does not paint, perhaps intentionally so, the visceral drama and the suspense of a leader hunted and haunted in the mountains of a troubled nation. Rather, it is a free-verse poem that slogs on languidly, leaning heavily on beautiful landscapes, visions and metaphor.

For audiences in Georgia the film did come as a reminder of the dark era of the early 1990s: a country ravaged by wars and plunder; the bearded men in military fatigues, with headbands and machine-guns; the smell of kerosene lamps and heaters that replaced electric lights and central heating. The harsh reality is that Georgia’s early post-Soviet years were marked by economic dysfunction.

These are memories many Georgians are keen to supress. At a screening in Tbilisi's Amirani cinema, shortly after “Khibula” opened in late November, one woman in the audience was heard to complain: “Why am I doing this to myself? Couldn't we go see something fun?”

After the screening, viewers stepped outside to discuss the film and the memories it evoked. They recalled the wry jokes of the Gamsakhurdia era: improvised birthday cakes named after various political leaders in a facetious excuse for the fact that these treats lacked basic ingredients; the term “black stockings,” a pejorative applied to female reinforcements streaming in to Tbilisi from Western Georgia, where Gamsakhurdia’s family hailed from, to support the president holed up in a bunker of a besieged government building.

But the viewers also exchanged criticism for the film. The storyline struck many as somewhat repetitive, a series of interchangeable encounters with village folks, who gasp in awe at the sight of Botono Presidento (Mr. President) and commiserate with his plight. “Every scene seems like a reproduction of the last, as they jump from village house to village house, until someone comes in and tells them it is not safe and they have to go. Again and again,” said Jeff Haack, an American living in Georgia. “There is so little plot that I didn't feel any empathy for the characters.”

Some Georgians were left with a similar impression. “The story ends where it starts and we see little progress in between,” Khatiashvili said. “Giorgi [the director Ovashvili] has a very distinct style of visual narration, creates very cinematic scenes, but the story has to develop dramaturgically even if the form of narration is deliberately monotonous.”

Iranian actor Hossein Mahjoub gives his best to delineate Gamsakhurdia, but most other characters (and their acting) blur into obscurity. Gamsakhurdia himself fades into a generic character, a concept rather than an actual historic figure. Ovashvili himself has said that he views the story of Gamsakhurdia as a broader “story about what kind of condition a man can be put into by the nation that had itself chosen him as a leader.”

“Perhaps it was this deliberate detachment – avoiding exploring the question of Gamsakhurdia’s death and the criticism that he faced as a leader, choosing a foreign actor to portray him and turning him into a metaphor – is part of the reason why the film does not have the punch,” Khatiashvili added.

An even-handed, sober look at Gamsakhurdia’s personality and his era remains elusive in Georgia. The leaders that followed him tried to emphasize the side of him that best fit their own purposes. It served Eduard Shevardnadze to vilify Gamsakhurdia – the man he replaced under controversial circumstances. Supporters of Gamsakhurdia, known as the Zviadists, constantly challenged Shevardnadze’s legitimacy. Led by the late president’s widow, Manana Archvadze-Gamsakhurdia, Zviadists would hold vigil at the gate of Shevardnadze’s residence, chanting “Judas, Judas!”

The third president of Georgia, Mikhail Saakashvili, who, in turn, ousted Shevardnadze, and was keen to denigrate his predecessor’s tenure, rehabilitated Gamsakhurdia, awarding the deceased leader the posthumous title of a national hero. The first president’s remains were then reinterred in Georgia with state honors.

Today, Gamsakhurdia's legacy is, for the most, part ignored. “We generally don’t have a good record of facing history objectively and it gets even harder when dealing with recent history,” said Kornely Kakachia, the director of the Georgian Institute of Politics. “What was set in motion then is still in progress now – aspirations for independence, territorial integrity and western integration – and this makes harder for us to maintain a clinical detachment.”

Khatiashvili, the critic, said that “Khibula,” for its part, will likely not inspire the meaningful discussion that Georgia needs. “The movie will go away as quietly as its characters walk on and on.”