Washington's envoy will be thrust into a rancorous election season in which she’ll be expected to mediate between the government and opposition. 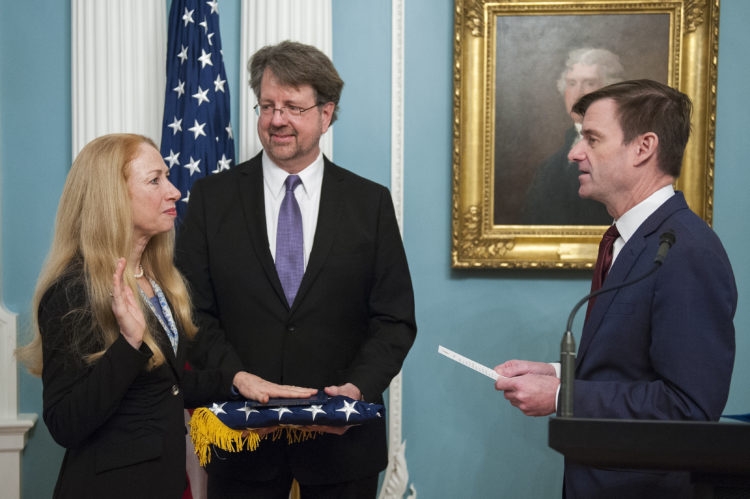 Kelly Degnan, left, is sworn in as the United States ambassador to Georgia on January 16. (photo: U.S. embassy Tbilisi)

After an absence of two years Georgia finally has an ambassador from its closest ally, the United States.

The new U.S. ambassador, Kelly Degnan, has arrived in Tbilisi and will receive her credentials on January 31. The position of U.S. ambassador in Georgia is always high-profile, given Tbilisi’s deep reliance on Washington, and Degnan arrives under especially delicate circumstances.

Her appointment follows a controversy involving accusations that the Georgian government blocked Washington’s previous nominee for the ambassadorship for being too friendly with the opposition. And she assumes her post amid a contentious election season in which the U.S. is expected to play a key role in mediating between the government and opposition.

The last U.S. ambassador to Georgia, Ian Kelly, retired in March 2018. Degnan was apparently the U.S.’s second choice for the job: According to a report in the magazine Foreign Policy, the U.S. initially chose Bridget Brink, a diplomat with long experience in the Caucasus, to be Kelly’s replacement. But, according to FP’s sources, the Georgian government blocked Brink’s nomination because it believed she was too sympathetic to the opposition, in particular former president Mikheil Saakashvili.

All sides denied the report, and Eurasianet was unable to confirm it. But the government, led by the ruling Georgian Dream party, has increasingly complained about the opposition sympathies of many American organizations in Tbilisi. Most recently, it has attacked the International Republican Institute and National Democratic Institute for their opinion polls, which have shown low and falling support for Georgian Dream, claiming that the groups are infiltrated by opposition supporters.

At the same time, several voices in the U.S. have recently voiced criticism of the Georgian Dream-led government.

In December, the co-chairs of the U.S. Congress’s Georgia Caucus wrote an open letter to Prime Minister Giorgi Gakharia expressing concern about violent crackdowns against protests and the government’s reneging on a promise to reform the country’s electoral legislation.

And on January 28 Pete Olson, a member of Congress, accused Georgian Dream’s chairman Bidzina Ivanishvili of being a “Russian puppet” because the government has taken a scofflaw American energy company to court. While the allegations are far-fetched, and their credibility undermined by Olson’s campaign donations from the company in question and his inability to pronounce Ivanishvili’s name, they were nevertheless embraced by Georgia’s opposition leaders.

So: Degnan has her work cut out for her.

The top agenda item will be the parliamentary elections, scheduled for October. Georgian Dream has given a number of signs that it may try to put its thumb on the scale of the vote, most notably when it brazenly reneged on its promise to reform the current electoral system that would give it a leg up if kept in place.

Western embassies in Tbilisi, including the U.S.’s, have carried out several rounds of negotiations between Georgian Dream and opposition officials to try to reach a compromise on the electoral law ahead of the election. Even if they manage to succeed in that effort, the rancor between the two sides is so great that the results in October are likely to be fraught and contested.

The election “will be very competitive, the Georgian polity is already very polarized and the role of the international actors like the U.S., EU, and others will be crucial,” said Kornely Kakachia, the head of the Tbilisi think tank Georgian Institute of Politics. “Her [Degnan’s] presence here will be very important … Her credibility is quite important because she has to be mediating between the two sides, and that’s not an easy task.”

Kakachia noted that in Georgia’s last two political transitions – from the rule of Eduard Shevardnadze to the leaders of the Rose Revolution in 2003 and then from Saakashvili’s United National Movement to Georgian Dream in 2013 – U.S. diplomats helped usher along the handover of power.

“Historically, the role of the U.S. ambassador has always been important,” Kakachia told Eurasianet. “If there were no consolidated pressure on Saakashvili’s government from the West, especially from the United States, I don’t think he would have left power so easily. And the same thing might happen now.”

In her swearing-in remarks, Degnan alluded to the difficult election ahead. “Parliamentary elections later this year are an important opportunity for Georgians to show the world that the progress they have worked so hard for cannot be reversed,” she said. “I look forward to working with the Georgian government and civil society to support a free and fair election process.”

Degnan herself may be particularly well suited to act as an honest broker between the government and opposition, given that she is “deeply qualified to be the ambassador but without Caucasus baggage,” said Paul Stronski, a senior fellow in the Russia and Eurasia Program of the Carnegie Endowment for International Peace, a Washington, DC, think tank. Degnan, a career diplomat who has served in Turkey and at NATO and was most recently foreign policy advisor to U.S. Naval Forces Europe, had never been to Georgia before being nominated.

U.S. involvement in Georgia has gradually declined in recent years, and that decline has accelerated under President Donald Trump, who has carried out a chaotic foreign policy with a few very high priorities and other areas – including Georgia – falling through the cracks.

“In the dysfunction inside the U.S. foreign policy establishment, [Georgia] went from being a country where we’ve always had an ambassador because it’s a key country, to one where there’s been a two-year gap, which is particularly long, even in the Trump administration,” Stronski told Eurasianet.

But that lack of attention may accentuate Degnan’s role, Stronski suggested: “Given the dysfunction in Washington now, a lot of policies are coming out of the embassies.”