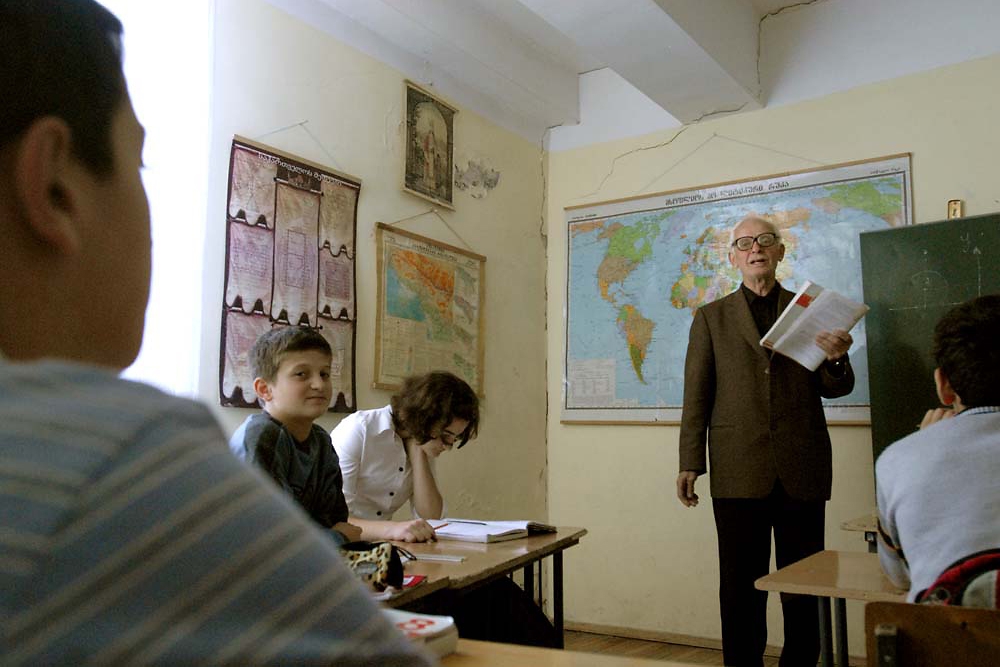 According to official data, Georgian teachers earn on average about $200 per month. (Photo: Molly Corso)

In 1960, the Georgian poet Ioseb Noneshvili lauded teachers as role models and pillars of society who were endowed with the “light of knowledge.” But his patriotic vision collapsed with the Soviet Union: in today’s Georgia, becoming a teacher is no longer every “child’s wish.” This shift in attitude has potentially profound economic ramifications for the aspiring European Union member.

Complaints about low teacher pay and prestige can often be heard in the United States and Europe as well. But for this small, South-Caucasus country, they come with particular urgency – without skillful teachers to educate its future workforce, Georgia’s ambitions for pulling itself out of poverty and into the European Union become less realistic.

According to official data, Georgian teachers earn on average just 360 laris ($205) per month, the lowest salary among public employees. Salaries do not generally change based on experience. To compensate, many teachers earn extra income through home tutoring – even for their own students.

Policymakers say they are aware of the challenges, and are working on a 2014-2024 strategy aimed at promoting teaching as a career choice. Among other features, it includes university-level training for aspiring teachers and a change in the pay scale.

The initial draft for Georgia’s 2015 budget, submitted to parliament on October 3, allocates 828.9 million laris ($473.4 million) to the Education Ministry; a 9.8 percent increase from 2014. But while more money is welcome, experts argue that resources alone cannot offset the educational system’s disorganization.

“The question is the efficiency of spending. There are too many teachers teaching too few hours and to too few students,” said Sasha Graumann, UNICEF’s representative in Georgia. With salaries already absorbing 70-percent of the total education budget, the government cannot afford to raise the pay of all its teachers, but it can make the system more efficient, he emphasized.

“You can either spend 527 million laris ($300.9 million) on 65,000 teachers working 15 hours a week or spend the same amount for half the teachers, working double the time and getting a proper salary,” Graumann said.

Cutting the teaching force, though, could have near-term socio-economic consequences for many rural Georgia’s communities.

“Schools play a key social role in rural and mountain areas,” commented Eliso Chapidze, deputy head of parliament’s Education Committee. “Yes, there are school[s] with a few pupils, but if [such a school] disappears, the village is likely to disappear, as the presence of a school is one of the main reason[s] that prevents families to migrate [sic] to bigger towns.”

The qualifications of Georgia’s teachers have also been under scrutiny. Currently, schools hire teachers just based on a university degree, although give preference to those with teaching certificates or some teaching experience.

Overall, less than a quarter of Georgia’s 67,152 public and private school teachers hold a teaching certificate. Since 2010, the government has awarded eight-year teaching certificates based on a voluntary, two-part exam on subject knowledge and pedagogical skills. Those who pass are eligible for a salary increase. The test, though, has had a high failure rate.

In 2014, just 17.5 percent of the almost 15,500 teachers who took the exam passed it. Those with a science specialty did particularly poorly: only 29 of 250 physics teachers and 42 of 313 chemistry teachers passed.

Ivane Mindadze, deputy director of the government’s National Examination and Assessment Center, thinks that those statistics are open to interpretation. “The results are not an indication of the whole teaching force,” he asserted.

A new certification system is currently being designed and foresees more flexible criteria, including a portfolio assessment throughout the year, class observation, evaluation carried out by the schools, and subject-knowledge tests.

“We need good, certified professionals, but you can’t judge a teacher on a one-off test,” said Sergo Turglishvili, who has served as a school principal for 22 years and is a former World Bank education expert. “Some educators who have passed the test are not prepared to manage a class, and vice versa.”

Only a fraction of Georgia’s teachers have taken the test. Madga Nutsa Kobakhidze, a former teacher and Ministry of Education official doing doctoral research into the teacher certification process in Georgia, noted that there is scant incentive to invest the time needed to pass the test. “The salary increase is minimal, about 60 laris after tax ($34), the workload significant, and the humiliation in case of failure demotivating,” Kobakhidze said. No information exists about what incentives the revised certification process might offer.

What experts and policymakers seem to agree on is the existence of a gap between the preparation of the majority of Georgia’s teachers and the country’s teaching reforms.

“Most teachers were trained in Soviet times, or immediately after with a knowledge-based approach, while the new curriculum with its competencies-based structure [which emphasizes the application of knowledge, rather than rote-learning] was probably too ambitious,” explained Irina Abuladze, deputy director of the education ministry’s National Center for Teachers’ Professional Development.

To bridge that gap, Abuladze emphasizes the need for “constant and well-tailored training.”

Yet constant changes are exactly what tires teachers. “Teachers need stability,” stated Mariam Loladze, a certified English teacher who also trains primary and secondary public-school teachers. “They need to know what is awaiting them … Without a long-term vision with concrete incentives and career advancement, will smart students be interested in becoming a teacher?”

Monica Ellena is a Tbilisi-based freelance journalist, who has worked previously as an elementary school teacher in Italy and a university instructor in Georgia.