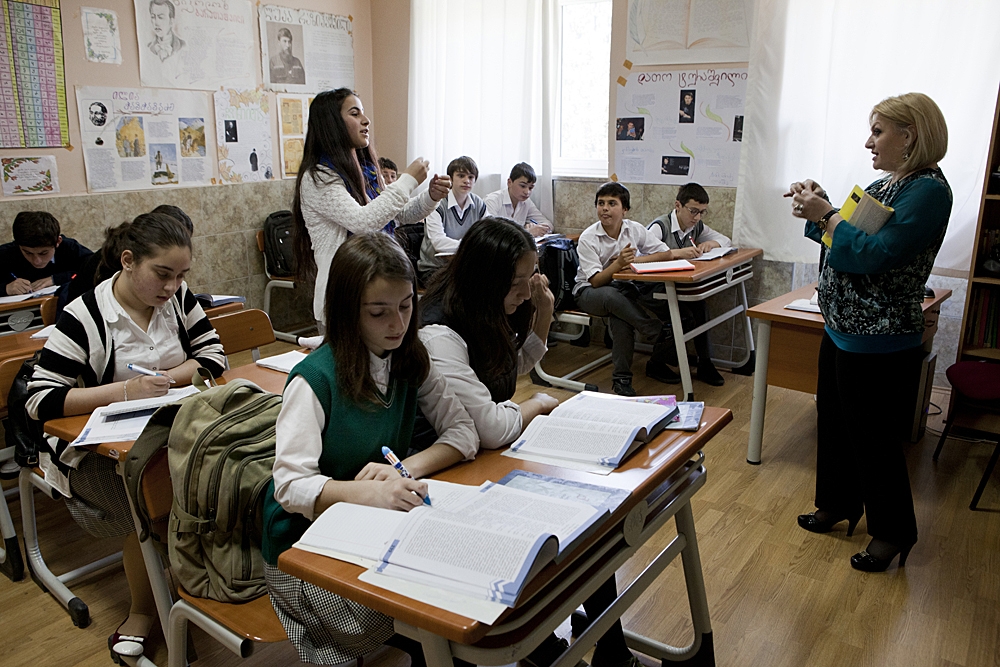 – A teacher and a middle school student talk during a class lecture at the Gülen-affiliated Refaiddin Şahin Friendship School in Batumi.(Photo: Justin Vela)

When the topics of conversation turn to Turkey and Islam, tempers can sometimes flare in the South Caucasus country of Georgia. Even so, a movement founded by the charismatic Turkish theologian Fetullah Gϋlen has found a welcoming community in this emphatically Christian country.

Gϋlen, a controversial, US-based Turkish religious leader, recently named by Time Magazine as one of the world’s 100 most influential people, heads a civic movement “rooted in the spiritual and humanistic tradition of Islam” that operates charter schools in 140 countries worldwide.

At first glance, Georgia doesn’t seem like a place where a Gϋlen school would take root, given that the Georgian Orthodox Church wields considerable influence and Muslims comprise just a sliver of the country’s population. But, here, as in other countries, Gülen schools’ representatives describe their mission as based on educational principles, not religion.

When the first Gülen facility in Georgia, a college, opened in the Black Sea port city of Batumi in 1994, "Georgia was a country fresh out of the Soviet system.… Education was a much-needed thing here,” recalled Fatih Demir, the deputy general-manager of Chaglar Educational Institutions, a Tbilisi-based non-profit that assists Gülen-affiliated schools in Georgia.

Nearly 20 years later, and despite aggressive reforms under President Mikheil Saakashvili, Georgia’s public education system still has plenty of shortcomings. Private education is a booming business in this country of 4.48 million people, with about 300 officially registered private schools. Parents are enthused about the schools’ smaller class sizes, the intensive foreign-language exposure that can bring better jobs, and the significant social status the schools, particularly if international, convey.

Annual tuitions for private schools, though, can run as high as $11,585, according to media reports – steep prices in a country with an average monthly salary of just 638 lari ($386).

But those prices, as well as growing demand, have created a niche for the Gϋlen movement. Since 1994, it has opened six primary-secondary schools in Georgia, as well as a university and a vocational school.

Few Georgians are aware of the schools’ connection with an Islamic movement, or have heard of Fetullah Gϋlen. In other formerly Soviet states, controversy has dogged Gülen schools, with suspicion often connected to the seemingly cozy relationship between the movement and Turkey’s governing Islamic-oriented Justice and Development Party. Local suspicion over the Gülen movement’s motives aren’t widespread in Georgia, however.

In the Black Sea port city of Batumi, located about a 30-minute drive from the Turkish border, the movement’s Batumi Refaiddin Şahin Friendship School-High School has carved out a niche for its reputation as a reasonably priced school ($2,000 per year) where children learn excellent English and have an opportunity to study abroad.

That reputation was not built easily. Once under Turkish control, both following World War I and during the Ottoman era, Batumi welcomes swarms of Turkish visitors, most of whom come to gamble in casinos, while a few seek investment opportunities. Some Georgians in the region feel vulnerable about the potential spread of Turkish influence. Those concerns erupted last summer, when angry protests broke out in the city against the influx of Turks and government plans to rebuild an Ottoman-era mosque.

But the Batumi Refaiddin Şahin Friendship School-High School did not become embroiled in the xenophobic outburst.

Locals recall the school’s Turkish name caused some alarm when it opened, as a college, in 1994, and, according to one Şahin teacher, some wariness about instructors being “friends with Turkish people” does still seem to persist. But today, the facility’s supporters range from the city’s moneyed elite, who have enrolled their children as students, to some Georgian Orthodox Church priests, who commend its scholastic reputation.

At the school, 46 Georgian and 14 Turkish teachers instruct 350 Georgian and 50 Turkish students, mostly the offspring of Turkish diplomats or businesspeople. The average class size of 15 students is nearly three times smaller than that of a typical Georgian public school class, with nearly double the number of daily classes, according to one high-school-age student.

The school does not teach Gülen's works and follows the Georgian state curriculum, Principal Mehmet Salih Koç said. "We don't want to impose Mr. Gülen's teachings. We are trying to create peace through education. Educated people contribute more to society and the world we are living in," Koç said.

Financing comes primarily from tuition fees and parents’ donations, rather than from the movement in Turkey, said the Chaglar Educational Institutions’ Demir. Koç admitted that the Gülen movement "becomes more of a topic when we speak with local authorities," but claimed that officials respect the group.

Even one of the most prominent critics of Turkish influence in Georgia, Deputy Parliamentary Speaker Murman Dumbadze, who represents Batumi in parliament and took active part in last year’s anti-Turkey protests, said he sees no reason to object to the Gülen school. “If a school is certified by the Education Ministry, then we don’t have any problem with it,” Dumbadze said.

Education officials in both Batumi and Tbilisi told EurasiaNet.org that there have never been any complaints about the Şahin school, or any reason for concern.

The Batumi school’s certification has proven a lightening rod for one opposition party. In 2010, when Şahin expanded into a new building, the Labor Party asserted that President Saakashvili’s mother, Giuli Alasania, deputy rector of the movement’s International Black Sea University, had facilitated its accreditation. Saaakashvili attended the structure’s opening.

Alasania could not be reached for comment, but Demir, who says he knows her personally, emphatically denied that the school benefited from her political connections. The allegations never gained traction in Georgian media, with even one Labor Party representative now struggling to remember the details.

Ultimately, Georgians’ hearty appetite for any educational edge is prevailing over all other concerns about the Gülen schools. “Our children are receiving a good education, a high-standard education,” noted Tariel Lebanidze, a former Georgian ambassador to Turkey.

Molly Corso is a freelance journalist who also works as editor of Investor.ge, a monthly publication by the American Chamber of Commerce in Georgia. Justin Vela is a freelance reporter based in Istanbul.