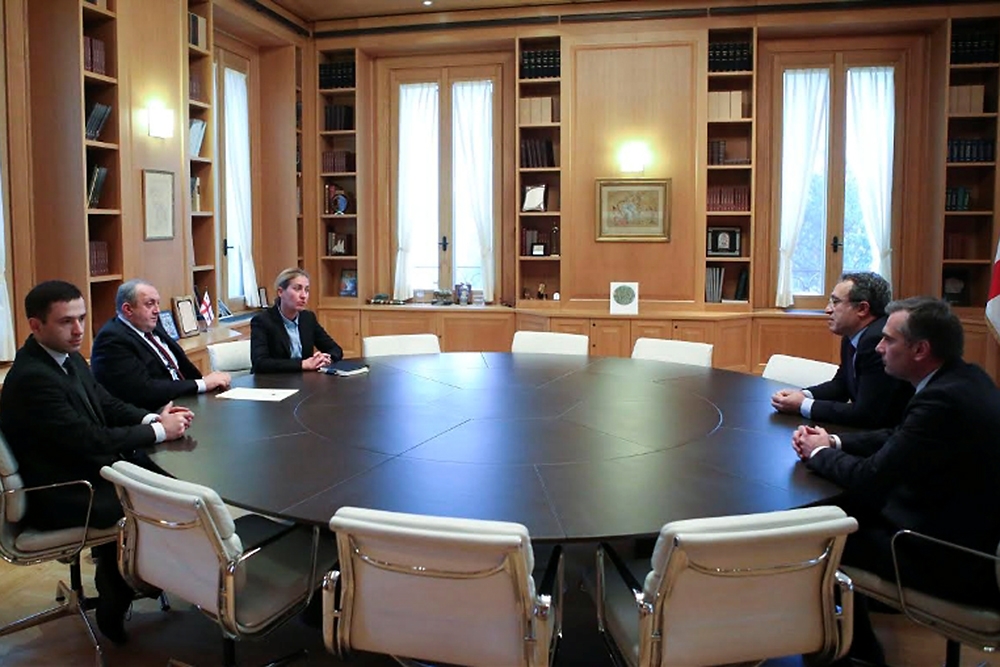 Georgian President Giorgi Margvelashvili (second from left) meets with Kibar Khalvashi (second from right), former co-owner of Georgian broadcaster Rustavi2, on Oct. 27 at the Presidential Palace in Tbilisi. A Tbilisi city court ruled that Khalvashi would have his shares in the broadcaster restored that he claims he was forced into selling almost a decade ago. (Photo: Georgian Presidential Press Service)

A judicial ruling in Georgia seems certain to turn up the heat on a long-simmering political confrontation.

In a decision issued late on November 3, Tbilisi City Court Judge Tamaz Urtmelidze upheld an ownership claim of Rustavi2 – a television channel currently closely associated with vocal critics of the incumbent government – in a suit filed by Georgian businessman Kibar Khalvashi. Under the ruling, Khalvashi stands to regain a controlling interest in the broadcaster.

The verdict, along with a parallel investigation into an alleged coup conspiracy, has further blurred the lines between media and political power in Georgia.

Rustavi2 lawyers assailed the ruling and vowed to appeal. Tacitly acknowledging the political sensitivities of the case, Georgia’s Constitutional Court, acting on a petition filed by Rustavi2 lawyers, issued an injunction against the implementation of the ruling until all potential avenues of appeal have been exhausted.

Rustavi2 is widely seen as aligned with the United National Movement (UNM), currently the main opposition party in Georgia. The UNM, which at the time was led by former president Mikheil Saakashvili, held a large majority in parliament following the 2008 parliamentary elections. But, amid complaints that the party and its leaders were restricting basic rights, the UNM went down to defeat at the hands of the Georgian Dream coalition in the 2012 elections. Since then, the UNM and Georgian Dream have remained bitter political enemies.

Rustavi2’s supporters contend that the suit was politically motivated – designed to deny the UNM a mass media mouthpiece in the upcoming parliamentary election campaign next year. Georgian Dream officials, including Prime Minister Irakli Gharibashvili, ardently dismiss allegations of official interference in the lawsuit. Though no concrete proof directly links Khalvashi to the government, his sister Pati is a prominent member of the ruling Georgian Dream coalition. Coalition leaders have not concealed their dislike of Rustavi2.

Khalvashi said his legal victory on November 3 redresses what he maintains were improper actions by the Saakashvili administration, which allegedly forced him to give up his ownership stake in Rustavi2 prior to the 2008 elections. “Today in court, Misha [Mikheil] Saakashvili was defeated. He is not the owner of Rustavi2 anymore,” Khalvashi said. “Regardless of how the case proceeds in higher courts, today I am the winner.”

Lawyers for Rustavi2 framed the November 3 decision as politically motivated. “This is an unprecedented court decision in the history of jurisprudence in the democratic world, in the sense that the court decision is based on the verbal testimony of the plaintiff, without any hard evidence in place,” Rustavi2 lawyer Zaza Bibilashvili told EurasiaNet.org.

Bibilashvili contended that the only documentary evidence submitted was a printout from Khalvashi’s personal computer that did not contain any information relevant to the case.

“When the conversation is about media ownership, it's very important that the plaintiff's side substantiate its case,” said Nino Lomiashvili, the director of International Society for Free Elections and Democracy, a local NGO. “I, in any case, really have the feeling that authentic proof was not presented. … I hope that at the second stage of appeal, and the third, these legal questions will be clarified.”

Political observers indicated that the case is, to a certain extent, a microcosm of Georgia’s struggles to establish civil society.

“This [the Rustavi2 case] is a bit of a Rorschach Test for observers of Georgia,” said Lincoln Mitchell, an expert on Georgian politics who formerly served as an adviser to the Georgian Dream coalition. “Those who saw a lack of independent judiciary and the use of selective justice will point to this as evidence of that. Those who saw the UNM regime as rife with abuse and some criminality will see this ruling in that context.”

“The truth is probably somewhere in the middle,” Mitchell added. “This is part of a long trend in Georgia of real struggle to establish judicial independence.”

Although UNM supporters worry that Rustavi2’s editorial direction could significantly change under Khalvashi’s management, the entrepreneur promised that current Rustavi2 news staff would keep their jobs and enjoy editorial freedom.

“This decision means nothing for our company,” Gvaramia said in televised comments. At the same time, he assailed the decision. “Judge Urtmelidze has become an adjective for injustice,” he stated.

With parliamentary elections a year away, some observers believe that the Rustavi2 case marks the opening volley in what promises to be an acrimonious campaign. In dismissing suggestions that the Georgian Dream was interested in knocking a UNM-aligned broadcaster off the air, Prime Minister Gharibashvili, speaking earlier in the day to reporters in Estonia, said flatly that “journalists’ politicization is impermissible.” He also described the lawsuit as “the usual democratic process.”

Representatives from embassies and international organizations attended the November 3 ruling, but have not yet commented publicly. Both the US and European diplomatic missions have called for transparency in the court proceedings, as well as respect for rule of law and freedom of speech.

Much of the dispute surrounding the Rustavi2 ownership struggle is unfolding on television, rather than in the courtroom.

Gharibashvili’s remarks clearly referenced phone conversations, recordings of which have been posted on Ukrainian-based websites in the past few weeks, between Saakashvili and his political allies in Georgia. Saakashvili, whose presidential term in Georgia ended in 2013, had the highly unusual distinction of being appointed by Ukraine’s president as governor of the Ukrainian region of Odessa earlier this year. He is on record as having described Georgian Dream leaders as stooges of Russia.

In an initial recording concerning the Rustavi2 case, the authenticity of which has been confirmed by Saakashvili’s interlocutors, the former Georgian leader called for a “revolutionary scenario” – a choice of words that prompted state security agents to question all his alleged interlocutors, including Rustavi2’s Gvaramia.

“I think that a free place does not exist in the civilized world for a politician who encourages … his party’s members and a TV station’s directors to organize criminal groups, a revolution,” said Prime Minister Gharibashvili on November 3. “I think that such a person’s place – it doesn’t matter who it is, a politician or a journalist – is in jail.”

In a separate alleged conversation with his longtime friend, Georgian singer Sofia Nizharadze, Saakashvili predicted that the confrontation over the channel could turn deadly. The recording, which Nizharadze deemed a compilation of conversations, was released on the eve of the court ruling.

Aside from Georgia itself, the leaked conversations have strained Tbilisi’s ties with Ukraine. Georgian Defense Minister Tina Khidasheli has asked for an explanation from the Ukrainian government as to why Saakashvili -- now a senior Ukrainian official, and a Ukrainian citizen – is meddling in Georgia’s domestic affairs.

Meanwhile, citing a constitutional ban on dual citizenship, the Georgian Justice Ministry is in the process of trying to revoke Saakashvili’s Georgian citizenship.

The eventual outcome of the Rustavi2 case could exert significant influence over the upcoming parliamentary elections, given that television has traditionally played a key role in shaping public opinion and voter preferences.

“If it [the final decision] puts Rustavi 2 out of business, or dramatically changes [the station’s] content, yes, it will have an influence,” said Mitchell, the Georgian political expert. “This would be very unfortunate for Georgia.”