Georgia: How Closely Should the State Embrace the Church? 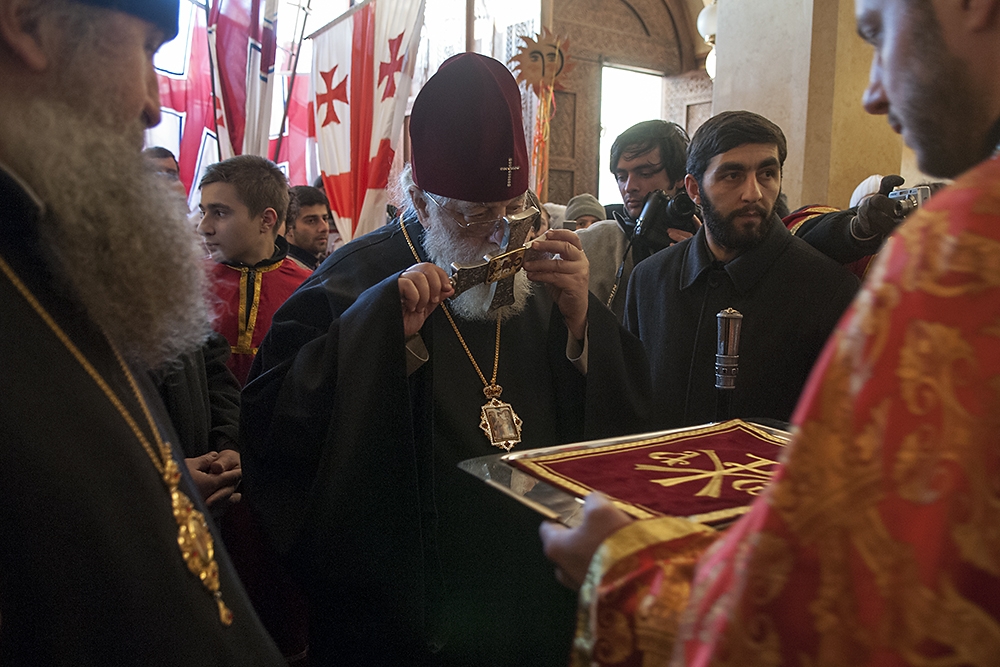 Catholicos Patriarch of all Georgia Ilia II kisses a cross inside Tbilisi’s Cathedral of the Holy Trinity near the end of the annual Alilo religious procession in 2008. A 2002 agreement grants the Georgian Orthodox Church an advisory role to the Georgian government. (Photo: Dean C.K. Cox)

Twenty-five years after regaining its sovereignty, the South Caucasus country of Georgia faces another question about independence — this time, about that of the state from the Georgian Orthodox Church, the country’s main religious faith.

“The Church is quite independent from the state, but is the state independent from the Church?” asked political scientist Ghia Nodia, a former education minister, at a May 18 conference (“Religion, Foreign Influences and Parliamentarism: The Prospect of Consolidated Democracy in Georgia”) in the capital, Tbilisi. “It’s the second part of this question that interests [people the] most in Georgia.”

The official answer from both the Church and state is that they are, indeed, independent. A 2002 agreement grants the Georgian Orthodox Church, the faith of roughly 83 percent of Georgia’s 4.3 million citizens, an advisory role to the government, but without the status of a state religion.

Nonetheless, some contend, the government-financed Church, exempt from taxation, is a state religion in all but name.

Eka Chitanava, director of the Tolerance and Diversity Institute, contends that since 1992, when the Church regained legal recognition, the modern Georgian state has used the Church for “legitimacy” and the Church, in return, has gained “a lot of financial resources” — aside from a tax-exempt status, about 25 million laries (over $11.3 million) per year, in recent budgets.

“The problem was that the state was … unable to separate itself from the Church,” she commented at the aforementioned conference, organized by the non-profit Georgian Institute of Politics. With the Georgian Dream coalition’s advent to power in 2012, she said, “now we see the utmost loyalty of the government to the Church.”

Arguably, this is a matter of national identity — since its founding in the 4th century, the Church has outlasted many Georgian governments — as well as votes. At official celebrations of Georgia’s May 26 Independence Day in Tbilisi, 83-year-old Patriarch Ilia II sat between President Giorgi Margvelashvili and Prime Minister Giorgi Kvirikashvili on the reviewing stand.

But critics charge that the state had gone too far in following the Church’s lead.

A state agency on religious affairs, answerable to the prime minister’s office, has proven “a rather Soviet structure to control religious structures,” Chitanava argued. Cases of Islamophobia have not been investigated as promised, she contended, nor have those priests who violently attacked a 2012 anti-homophobia rally been punished.

After the patriarch stated last December that he should be allowed to amnesty prisoners, Minister of Corrections Kakhi Kakhishvili agreed, and the government pledged further action.

A government initiative to change the constitution to define marriage as uniquely heterosexual also has been attributed to the Church, which states that “secularism and moral relativism” now threaten that institution.

At the same time, the Church can busy itself in some unexpected areas. On May 20, for instance, Ilia II received Agriculture Minister Otar Danelia and other officials to discuss the revival of traditional Georgian grapes (the Patriarchate has its own viticulture research center) and livestock, as well as “prospects for the development of bee-keeping.”

Yet while some activists and journalists question this relationship, that criticism vanishes when it comes to cooperation on most secular Georgians’ ultimate goal — membership in the European Union.

In this campaign, the Church, arguably Georgia’s most trusted public institution, can prove to be a strong political ally.

Both the government and EU member states appear to recognize that.

An ongoing project financed by the British and Dutch embassies, and organized by the Tbilisi-based Center for Development and Democracy and the Patriarchate’s Education Center, focuses on educating priests about the EU for them, in turn, to educate their parishioners.

Russian media and some conservative priests have led parishioners to believe that membership in the EU would entail acceptance of homosexual marriages, a nonstarter for most Georgians, and, ultimately, enfeeble the Church.

Rather than ignoring such topics, noted State Minister on European and Euro-Atlantic Integration Davit Bakradze on May 23, the government, Church and civil society “decided that we would need a broader, more substantial discussion of these matters to dissolve the myths created by anti-European forces.”

To that end, the EU has financed the publication of a book by one Georgian non-profit, the 21st Century Union, on the legal status of Orthodox Churches in nine EU members (Bulgaria, Cyprus, Estonia, Finland, Greece, Latvia, Lithuania, Poland and Romania). Bakradze’s office contributed unspecified assistance.

“The point is that the Orthodox Church is a great supporter of the EU for Georgia,” the minister told attendees at the May 23 presentation of “The Orthodox Church in European Union Member States.” Plans for its distribution were not detailed.

Many, of course, dispute the depth of the Church’s EU enthusiasm, instead positing that its sympathies lie more with conservative, Orthodox Russia — a charge senior clergy hotly deny.

In an impromptu response on May 18 to rights-researcher Chitanava, Father Giorgi Zviadadze, protopresbyter and rector of the Tbilisi Spiritual Academy, denounced claims that the Church is a “tool of Russian propaganda” as “based on ignorance.” They willfully overlook Church policy and meetings with representatives of both the EU and North Atlantic Treaty Organization, he said.

“We are teaching our Orthodox teachings. We don’t use propaganda, or any … country’s church [to influence parishioners]” he stormed, in reference to the Russian Orthodox Church. “The only instrument the Church uses is the word of the Lord,” he said of the Bible.

However, it also is willing to make use of “The Orthodox Church in European Union Member States.”

Father Giorgi described the 141-page study on the Orthodox Church’s status in the EU as “a great work” and noted that “we will read it with great interest.”

Mistakes, he added, would be flagged.