It could have been a pocket dial, but the Interior Ministry is not excluding the possibility of a cyberattack. 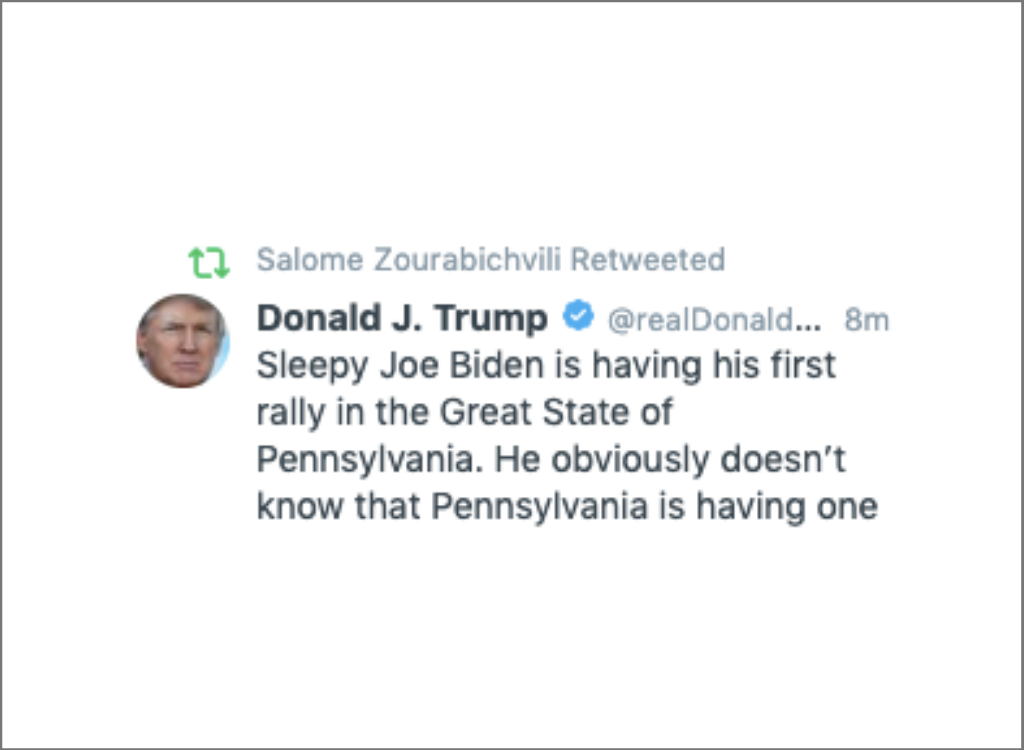 Georgian President Salome Zourabichvili retweeted a Donald Trump tweet, though she later deleted it. Security officials are now investigating whether it was an accident or something more nefarious.

One of the combative tweets that U.S. President Donald Trump regularly flings into the world has resulted in an embarrassing diplomatic episode in Georgia.

On April 29, Georgian President Salome Zourabichvili had the indiscretion to retweet a Trump missive in which the president dissed a political rival. “Sleepy Joe Biden is having his first rally in the Great State of Pennsylvania. He obviously does not know that Pennsylvania is having one of the best economic years in its history,” Trump tweeted on April 29, referring to a campaign event of the former vice president, who recently announced his candidacy to challenge Trump in 2020.

Sharing that message was an impolitic move for the president of Georgia, a country that relies heavily on its strategic partnership with the U.S. and as such needs bipartisan support in Washington.

Fortunately for Georgia, “Sleepy Joe Biden” and his fellow Democrats have not made much of the retweet, but Zourabichvili’s critics in Georgia immediately attacked her, accusing the president of both diplomatic and social media incompetence. “This is not the first time that Madam Zourabichvili is harming Georgia’s interests abroad,” said Davit Bakradze, the leader of opposition party, European Georgia.

U.S. Charge d’Affaires in Tbilisi Ross Wilson said that he had “seen the news” but refused to comment on it.

In the meantime, the presidential administration struggled to come up with an excuse for the tweetastrophe and settled on an internally contradictory explanation that satisfied no one. “It was a technical error, made by a social media accounts manager, but … we can’t rule out a cyberattack,” said the presidential spokeswoman, Khatia Moistrapishvili.

Social media responded with jokes, with some saying that Zourabichvili goes around “pocket-tweeting” or gives her phone to children to play with. “She should update her profile saying: RT ≠endorsement,” went one tweet.

The Georgian Interior Ministry then emerged to announce that it was looking into the retweet incident for signs of a cyberattack. A full investigative effort would begin if preliminary examinations suggest a case of hacking, a ministry official told Liberali Magazine.

The incident recalled an episode in Veep, an American TV comedy of presidential and vice presidential errors, where President Selina Meyer accidentally tweets a snarky remark about her rival and then blames China for it. As a part of a damage control effort, Meyer accuses the Chinese government of hacking into her Twitter account. In Zourabichvili’s case, she might be better served blaming Georgia’s enemy number one: Russia.