Georgia: Is Putin in the Pipeline? Resistance to Possible Gazprom Deal Grows 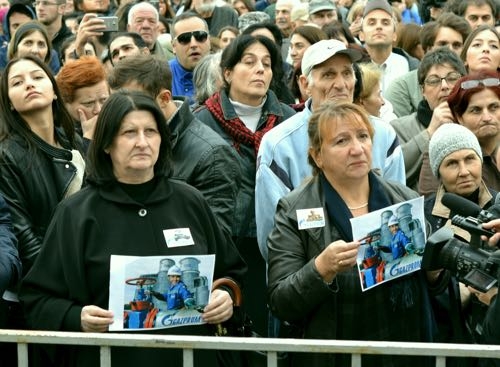 Anti-Gazprom Protest in Tbilisi on October 17

Georgia could be on the cusp of a bargain with Gazprom, Russia’s device for exports of natural gas and foreign policy, that many Georgians deem Faustian. The Georgian government’s intention to increase its imports of Russian gas has been met with fervent resistance as a potential threat to the country's pro-Western track.

On October 17, a crowd gathered in front of Georgia’s central government building to protest ongoing negotiations with the Russian energy behemoth. Seeking more gas from Gazprom amounts to Georgia bucking the trend among “developed countries” to reduce Gazprom’s influence, declared former ombudsman Giorgi Tughushi, who served when Georgia’s Russia suspicions were at their height, under ex-President Mikhail Saakashvili.

“This is tantamount to relinquishing our statehood,” charged Tughushi, warning that Georgia should expect Russia’s President Vladimir Putin “to come out of that pipeline.”

Talks with Gazprom have taken many aback, and, some locals believe, also neighboring Azerbaijan, which provides the bulk of Georgia’s natural-gas supplies. Initially, a surprise September 25 meeting between Georgian Energy Minister Kakha Kaladze and Gazprom Chief Executive Officer Alexei Miller was put down to routine seasonal adjustments for gas transit to Armenia via Georgia. Later on, after Russia media reported plans for another meeting between Kaladze and Miller, the Georgian energy minister said that several Georgian corporate clients were interested in purchasing Russian gas.

Other than the need to diversify, little explanation has been offered about why Azerbaijani gas wouldn’t work for these unnamed corporate clients. Amid concerns voiced by Azerbaijani media about Tbilisi reportedly rethinking its strategic cooperation with Baku vis-à-vis energy supplies, Georgian Prime Minister Irakli Gharibashvili flew to Baku on October 10 for an unannounced meeting with Azerbaijani President Ilham Aliyev. Gharibashvili later described as “absurd” claims that Azerbaijan’s standing as a strategic partner for energy supplies was at risk.

But the news of another planned Gazprom-Georgia meeting, scheduled for “ the near future,” did little to placate such concerns.

“I tend to pick idiocy over conspiracy as an explanation for [bizarre] development,” Tamar Chergoleishvili, director of Tabula TV and an outspoken critic of the ruling Georgian Dream coalition, told rally participants. “It is tempting to put this down to boundless imbecility and political illiteracy,” she said, arguing that the Gazprom move fits within the context of the government’s policy of building economic bridges with Russia.

In comments to Georgian Public Television the day before, however, Kaladze claimed that Azerbaijani officials at a regional business forum earlier in the week hadn’t even mentioned the matter. He has presented the Gazprom discussions as part of a general desire to increase Georgia's attractions as an energy-transit hub, including for Iran.

Georgia’s own gas reserves are limited, with domestic production standing at some 16.5 cubic meters annually. The country gets much of its natural gas by skimming off a share from transits that go through its territory, mainly from Azerbaijan to Turkey and smaller volumes from Russia to Armenia.

Georgia now intends to increase consumption of the Russian gas beyond its transit payoff of 10 percent of Gazprom’s shipments to Armenia, the Georgian energy ministry told EurasiaNet.org on September 30. Last year, that cut amounted to 200 million cubic meters or some 10 percent of the country’s total gas needs,

The ministry did not elaborate about reasons — either economic or the 4.4-percent drop in Azerbaijani gas-production levels as of this September, compared with the same nine-month period last year.

Resistance to the government's plans is partly led by groups tied to the largest opposition group, the United National Movement, but it also goes beyond partisan lines to include some members of Georgia’s intellectual elite. The concerns over the Gazprom talks comes amidst a drop in public support for integration with the European Union.

Much of the counteraction is expressed through Facebook, Georgia’s preferred forum of activism. More than 5,000 people indicated they would go to the October 17 rally, though the actual showing was relatively humble.

Amidst a biting cold, one of the rally participants, Zurab Tatanashvili, an associate professor of social sciences at Tbilisi State University, noted the irony “if I catch cold at a rally against Gazprom.”

“But I had to come here… because steps like these can take us back to being an obscure Russian dependency and do away with whatever chance of progress we have. ”