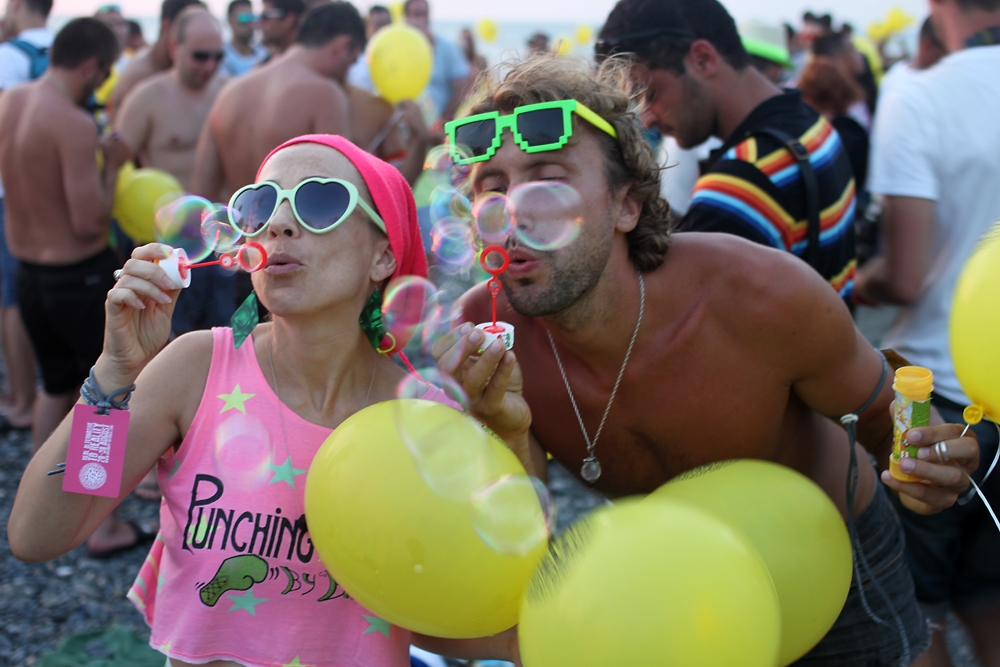 The booming rhythms and bass beats of electronic music go on for 24 hours a day in a small village on Georgia’s Black Sea coastline, and the reverberations are being felt across this South-Caucasus country.

The music is the calling card of Kazantip, one of the world’s largest electronic music festivals. But Kazantip’s future here depends on how many people it can attract to a place that sees its presence as both a blessing and a curse.

In a sense, Kazantip is a war-refugee. After 21 years in Ukraine’s northeastern Crimea, the festival this year migrated to the tiny, would-be-resort village of Anaklia in western Georgia. Organizers felt they needed to escape the legal and political uncertainties that followed Russia’s March annexation of the Crimean peninsula.

World-renowned DJs such as Stanton Warriors (United Kingdom) and Joachim Garraud (France), and some of the festival’s primarily Russian and Ukrainian visitors followed along, but Kazantip has had problems adapting to its new environment.

In an August 25 statement, the festival’s founder, Ukrainian Nikita Marshunok, the self-declared “prezident” of the so-called Ex-Democratic Republic of Kazantip, took issue with both the turnout and the reception in Georgia. “We want to share beautiful music. … But Georgians sit at home, watching us on Facebook,” Marshunok complained, the Interpress news service reported. “It’s weird, isn’t it?”

For many in socially conservative Georgia, it’s Kazantip that’s weird.

Created by Marshunok, a windsufer, in 1992 as an end-of-season party, Kazantip evolved into a rave gathering that attracted thousands at an unfinished nuclear reactor on Crimea’s cape of the same name. In 2001, the festival moved to the underdeveloped Crimean village of Popovka, where it continued to grow, gaining a worldwide reputation for debauchery.


That reputation sparked a sharp reaction from the powerful Georgian Orthodox Church and conservative civic leaders, who have held a series of protests against the festival for its perceived immorality. “The ideology of Kazantip promotes psychedelic drugs and the ritual of free sex. Of course, we’re against that. How can a healthy person be for that?” asked Iosef Manjaridze, a leader of a May 26 protest in the capital, Tbilisi.

Residents in impoverished Anaklia looked forward with great anticipation to welcoming the 40,000 people who had been expected to attend. Hoping to cash in on the influx of tourists, they constructed makeshift bars, restaurants and shops along both sides of Anaklia’s kilometer-long boulevard to accommodate the expected throngs.

“Nobody in Anaklia is against Kazantip,” emphasized 63-year-old Pavel Tsusurmia. “The only people against it are outsiders.”

But the partying masses so far have failed to show. By August 25, the fifth day of the festival, only about 4,000 to 5,000 people had made it to Anaklia, according to Marshenok; a number that locals say is still a record, but far short of the numbers they had anticipated seeing.

The low turnout was also a disappointment for the owners of establishments on the half-square-kilometer of pristine coastline that constitutes the “Kazantip Republic.” Renting space for a bar for the ten-day event cost 15,000 euros (about $19,799), payable to a Kazantip account, said Ilya Kozhevnikov, the co-owner of Gnezdo (The Nest), a Russian restaurant.

Beers sold for what regulars termed an unprecedented 10 laris ($5.80), and shots for 20 laris ($11.61). By August 25, entry, food and drink prices reportedly had been slashed by up to half in an apparent bid to attract more visitors.

“It looks like I’m going to lose money, but at least we’ll have fun,” Alexander Toykinen, a Moscow bar manager who estimated he had invested $50,000 in setting up his own facility, said.

For many party-goers, fun means drugs, but, reportedly, few were willing to take the chance of smuggling drugs into a country that has some of the strictest anti-narcotics laws in the region.

The festival was accompanied by a robust show of police force – roughly one officer for every 40 people, and frequent motor-patrols. In Crimea’s Popovka, Kazantip had had its own security; but in Anaklia, Marshenok was obliged to accept Georgian police, who have little to no experience in rave environments. “What do they think we’re going to do? This is crazy,” commented one veteran Kazantip partier called Sergei. “If Kazantip is in Georgia next year, I’m not coming.”

Some facility owners complained to EurasiaNet.org that the government had slapped unexpected taxes on tent-space inside Kazantip. The man credited by the government with bringing Kazantip to Georgia, Giorgi Sigua, the former head of the Department of Tourism, was not available for comment.

When asked by EurasiaNet.org how Kazantip had arrived in Georgia, Sigua’s explanation was succinct. “By plane,” he said, and dodged further comment.

Most Kazantip participants agree that Anaklia is an improvement over Popovka in terms of beauty, infrastructure and local hospitality. Yet whether Kazantip will return to Anaklia depends on whether Marshenok thinks it’s worthwhile.

Anaklia’s locals, who have never seen adult summer vacationers in day-glo outfits, synthetic fur coats and platform shoes, want these people back again.  Zemfira Gabunia, a retired woman running a fruit stand across from Kazantip’s “visa office,” believes the anxiety stirred up by the protests proved to be unfounded.

“So far, the only people I’ve seen causing trouble are Georgians,” she said, referring to cases of alleged drunkenness and disrespect toward women. “These [guests] are all good, clean, polite kids.”