As usual, senior officials in Tbilisi are choosing not to rock the boat with Russia. But many are advocating for stronger support for Kyiv. 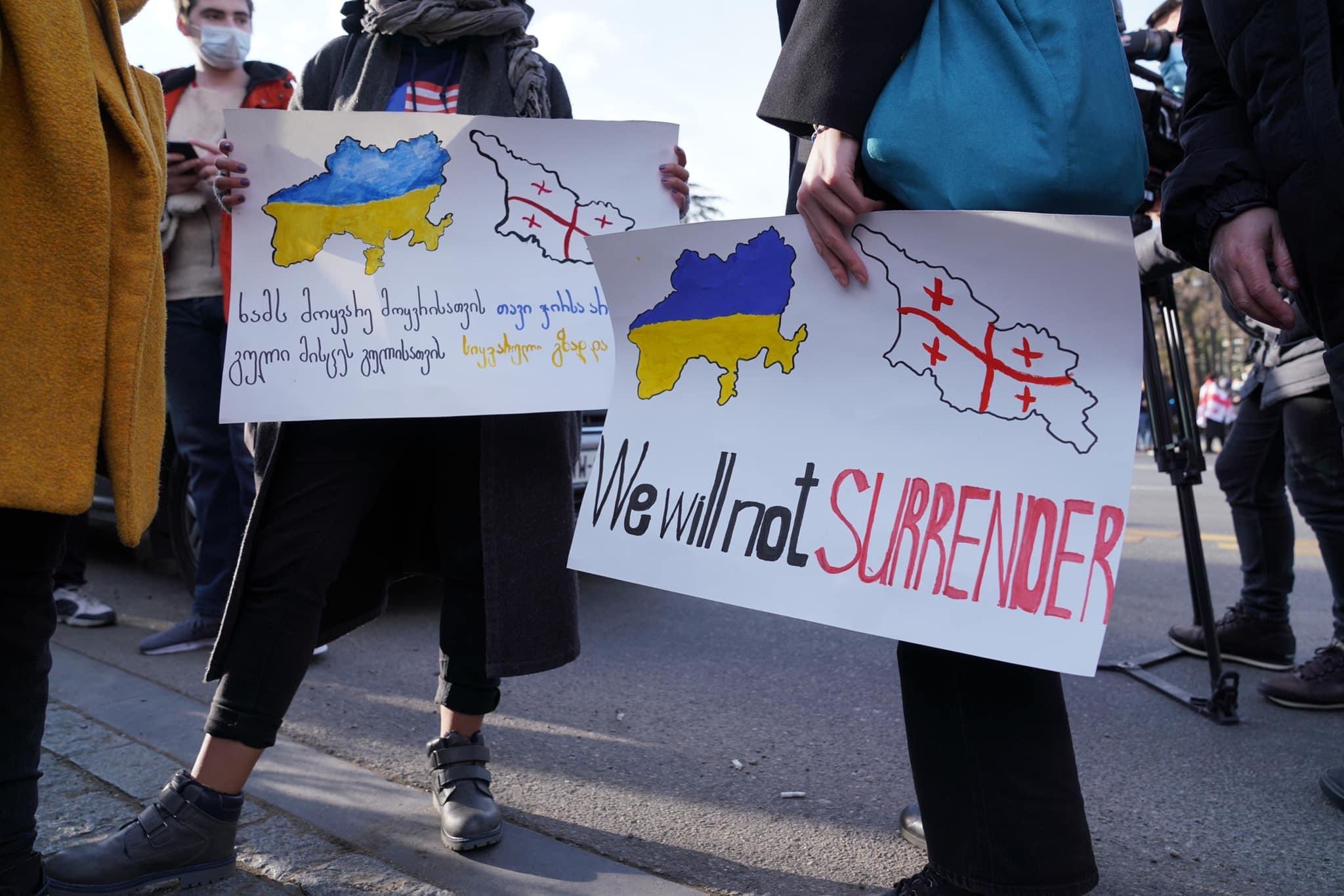 A rally in support of Ukraine in Tbilisi. (photo: Twitter, Democracy Defenders Georgia)

As Russia-West tension builds over Ukraine, another geopolitical battlefield – Georgia – is conspicuously quiet.

Russia’s massing of armed forces near the Ukrainian border, and American and European efforts to bolster Ukraine’s defenses, has drawn inevitable comparisons to Georgia, which fought a brief war in 2008 with its northern neighbor over South Ossetia. Then, as in Ukraine today, the backdrop was Georgia’s efforts to move closer to the West and join NATO and Russia’s determination not to let that happen.

But while Ukraine has been getting vocal – and in many cases material – support from many of its allies, Tbilisi has for the most part chosen to lay low.

Georgia’s foreign minister, in a January 23 tweet, expressed solidarity with Ukraine. But other than that, senior officials have been keeping mum. As the military buildup on the Ukraine-Russia border dominated headlines around the world, at a January 24 cabinet meeting Prime Minister Irakli Garibashvili completely ignored the topic.

In comments to RFE/RL published on the same day, former American ambassador to Georgia Ian Kelly said it was “unbelievable” that Garibashvili had yet to phone his Ukrainian counterpart.

“Tbilisi is embracing the ‘ostrich policy’: let’s wait and see what happens, let’s not irritate Moscow,” Kornely Kakachia, head of the think tank Georgian Institute of Politics, told Eurasianet. “This is probably because Tbilisi knows what taking an active position on Ukraine is fraught with: sanctions from Moscow, closing of the Russian market and an intensification of borderization.”

“Borderization” refers to the hardening of de facto boundaries between Georgia proper and its two Russia-backed breakaway territories, South Ossetia and Abkhazia, which Russia formally recognized as independent countries in the wake of the 2008 war. (Virtually no other countries followed suit.) Russian border guards regularly detain Georgian villagers who venture too close to the newly built fences, requiring arduous, European Union-mediated talks to return them to Georgia proper.

Russia has also repeatedly slapped sanctions on Georgia, and since 2019 has banned direct flights between the two countries. Asked about the possibility of those flights being restored, Russia’s Foreign Ministry on January 21 issued a statement saying that Moscow expects a “more reserved position” from Georgia: “We remain committed to the goal of normalization of Russian-Georgian relations… but it has to be a two-way street.”

Georgia’s current ruling Georgian Dream party came to power a decade ago vowing to lower the heat in Tbilisi-Moscow relations. While it has accomplished that goal, in recent years it has also increasingly been rhetorically distancing itself from its closest ally, the United States, sounding occasional isolationist notes while appearing less and less committed to Western-backed democratization efforts.

“All of this makes Moscow think that subjecting Tbilisi to its will is a much easier business than it is the case with Ukraine,” Kakachia said. “This is why they rarely speak of Georgia.”

But many pro-Western Georgians want the government to take a more assertive position. They have been expressing support to Ukraine on social media and some gathered in front of the Ukrainian embassy in Tbilisi for a January 23 rally. Leading opposition parties called on the Georgian parliament to issue a collective statement of support.

As senior American and Russian officials have been meeting to discuss Ukraine and a potential broader European security arrangement, the U.S. has sought to assuage Georgian concerns that it would make deals about Georgia’s security behind its back. “We will not negotiate about Georgia, without Georgia,” current U.S. ambassador Kelly Degnan said in a January 11 statement. But some interpreted her words as indirect evidence of Tbilisi’s desire to stay out of the process.

Even as Tbilisi chooses to lay low, some analysts believe that a new conflict could have direct implications for Georgia. “It is perilous to be under the illusion that distancing yourself from the Russian-Ukrainian conflict is good for national security,” Giorgi Badridze, an analyst with the Alexander Rondeli Foundation, told the TV station Mtavari Arkhi. “By isolating yourself, you run the risk of ending up on the wrong side of a new iron curtain.”

Kakachia made a similar point: “If Moscow achieves its goals in Ukraine, the next target will be Georgia, where the Kremlin has some unfinished business.”