Hundreds of Georgian protesters, assembled by Georgian Orthodox Church priests, descended on an anti-homophobia rally in Tbilisi to express their opposition to LGBT rights. 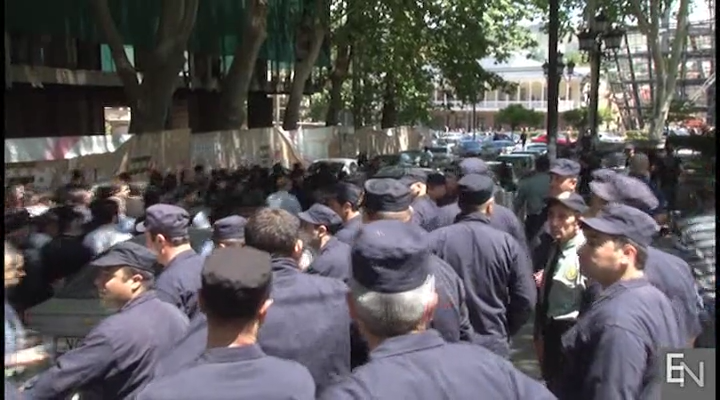 On May 17, hundreds of Georgian protesters, assembled by Georgian Orthodox Church priests, descended on an anti-homophobia rally in Tbilisi to express their opposition to LGBT rights. Gay-rights blogger Giorgi Kikonishvili, activist Irakli Vacharadze, head of the LGBT-rights group Identoba, the rally's main organizer, and visiting American researcher Rebecca Kraut were among several dozen rally participants who sought refuge in public buses from the crowd's violent attack.

Anticipating trouble, police had brought buses to the rally venue to evacuate participants. Protesters attacked and chased the buses that eventually took rally members to a military base on the city’s outskirts for protection.

Despite the panic on the bus, one of the rally participants jokingly had printed tickets from its ticket machine, researcher Kraut said. “So now, we all have a ticket from that bus ride,” she said.

But additional chances for humor are thin. The topic continues to rumble in Tbilisi, with a "No to Theocracy" demonstration planned for the evening of May 24 -- and, again, a simultaneous counter-protest.

Giorgi Lomsadze is a freelance journalist based in Tbilisi, and author of Eurasianet's Tamada Tales blog.