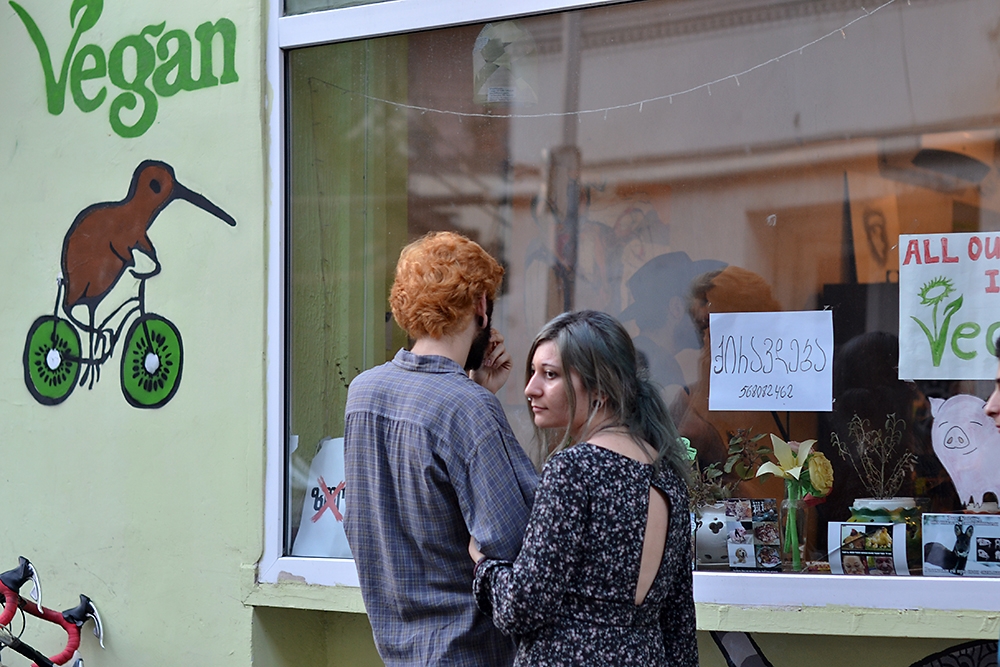 Patrons of the Kiwi Café stand outside the vegan restaurant in Tbilisi’s historic center. Café staff said that after a late May disturbance, the landowners and neighbors made it clear that the café is not welcome in the neighborhood. (Photo: Giorgi Lomsadze)

Intolerance appears to have the upper hand in an ongoing food fight in the Georgian capital Tbilisi.

Proprietors at an embattled vegan restaurant, the Kiwi Café, say they feel compelled to close doors at the establishment’s current location following a May 29 incident, in which alleged nationalists stormed the restaurant and peppered patrons with sliced meat. The suspected assailants are regulars at a war-themed bar.

The fight involving the Kiwi Café, a liberal counterculture joint in the city’s historic center, and the Military Bar, is a reflection of social and cultural tensions that are bubbling to the surface in the former Soviet republic.

Kiwi Café employees say that after the late May incident, the landlord and neighbors made it clear that the café patrons were no longer welcome in the neighborhood. The community apparently has an issue with the looks of the café’s staff and patrons.

“They told us that it is not acceptable in Georgia for a boy to wear flower-print pants,” said Giorgi Ianvarashvili, a young member of the café’s management team who sports lobe-stretching earrings and colorful tattoos to go along with a beatnik philosophy.

The café pays 1,000 lari (just over $470) for the modest space it rents on a narrow street that winds through a crumbling historic district. Café regulars – largely a young crowd with tattoos and piercings – used to take their beer and cigarettes outdoors, on seats made of crate boxes. “The owners said they don’t want problems with neighbors and requested that we remove the outdoor seats,” Ianvarashvili said. “They can’t evict us because we have a contract, but we will need to move to a larger place somewhere.”
Ianvarashvili contends that the Military Bar’s owners and regulars led the May attack on the Kiwi Cafe. Those affiliated with the Military Bar, where meat, beer and nationalism are revered, dismiss the allegation.

A dimly lit cellar at the other end of Tbilisi’s downtown, the Military Bar abounds in war paraphernalia such as military camouflage netting, uniforms and dummy hand grenades. The drink menu includes a homemade brandy called Bloody Kremlin, a swipe at Georgia’s public enemy number one, Russia. The bar’s Facebook page features an eclectic mix of posts, including those extolling soccer, nationalism and Donald Trump, “the new leader.”

One of the 20-something bar managers, Rezo, ably built and with a crew cut, claimed it was a Kiwi Café loyalist who made the first move in the clash of vegans and carnivores. One morning in mid-May, he told EurasiaNet.org, staff discovered the Military Bar’s entrance, decorated with sandbags and an army-style signboard, had been vandalized. After watching CCTV footage, they identified a Kiwi Café regular as the culprit.

“We knew that guy. He posts videos online where he burns the Georgian flag and curses at the army,” said Rezo, who refused to provide his last name. “They can eat what they want, but you should not mess with us, with our country, our values, our flag,” he said. “Our flag is as dear to me as my parents are. People gave their lives for it.”

Rezo said bar staff tracked down the alleged attacker, had a talk with him and then decided to pay the Kiwi Café a visit. He claimed he does not have contacts for the supposed culprit.

Kiwi Café staffers rejected having anything to do with vandalizing the Military Bar’s entrance. They asserted that the bar’s far-right clientele has long held a grudge against the pacifist philosophy that the vegan café represents.

The visit made by Military Bar regulars to the vegan café culminated in a brawl. Kiwi Café representatives say the intruders lit cigarettes and threw meat around. The Military Bar’s Rezo denied such activity, maintaining that the visitors merely brought a traditional Georgian meal, including meat dishes, as a peace offering. The establishment claims bias in media coverage. A police investigation is ongoing.

The Kiwi Café incident is bringing a multi-faceted culture clash into sharper relief. Hate and fear of otherness have a long history in Tbilisi, where dzveli bichebi (good ol’ boys) – a collective term for thuggish youngsters who espouse an informal code of honor – often pick fights with hipsters. The hipsters, in turn, often describe their foes as “orcs.”

Homophobia is playing a role in the food fight. Radical nationalists tend to view hipsters as synonymous with homosexuals. Using terms liberal and gay interchangeably, Rezo said that his perceived antagonists could engage in homosexual sex if they must, but nobody can defile the homeland’s “sacred symbols.”

In the wake of the attack, the Military Bar posted on its Facebook page a photo of a tabloid article with the headline “Homosexuals against Patriots?!” It commented that “traitors of the country deserve one thing – a bullet in the forehead.” Rezo denied this comment was meant literally, or was directed against anyone in particular. He does say that “those people should do their LGBT things at home” and not act provocatively in public.

Georgian ultraconservatives argue that the country’s traditions are threatened by the freedoms imported from the West. Since this rhetoric sounds similar to the state-sponsored nationalism in Russia and impedes Georgia’s integration with the West, far-right groups are often seen as pro-Kremlin agitators.

In an emailed statement, the Military Bar proprietors described as “unfortunate” US Ambassador Ian Kelly’s post-fight visit to “only” the Kiwi Café.