Georgia: Living a Life Apart in Tbilisi’s Settlement for the Blind 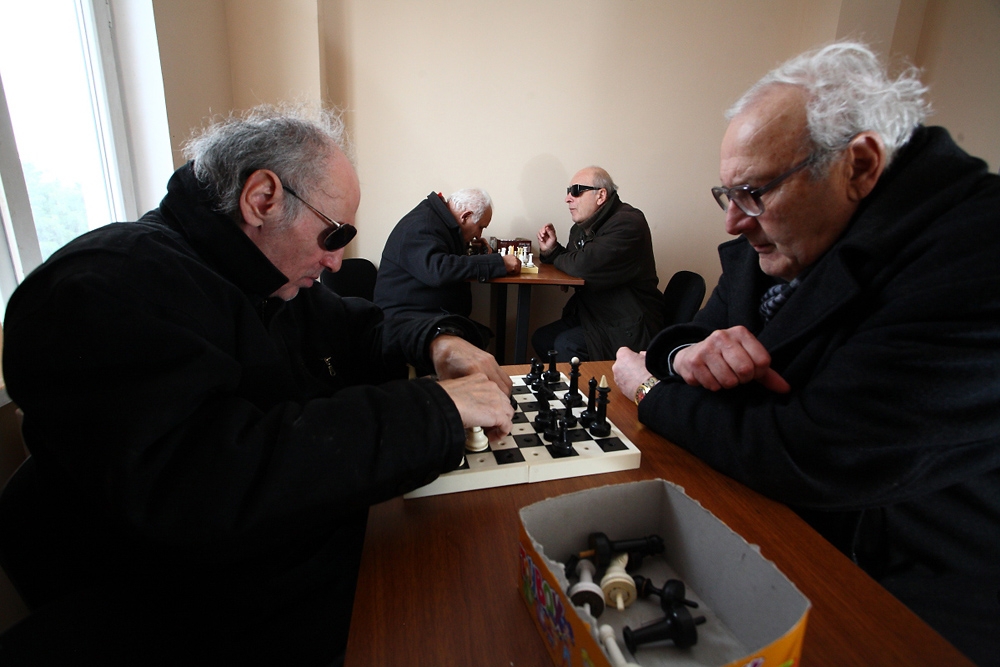 Partially blind instructor Nodar Gogadze (right) teaches chess club members of the Georgian Union for the Blind how to play. 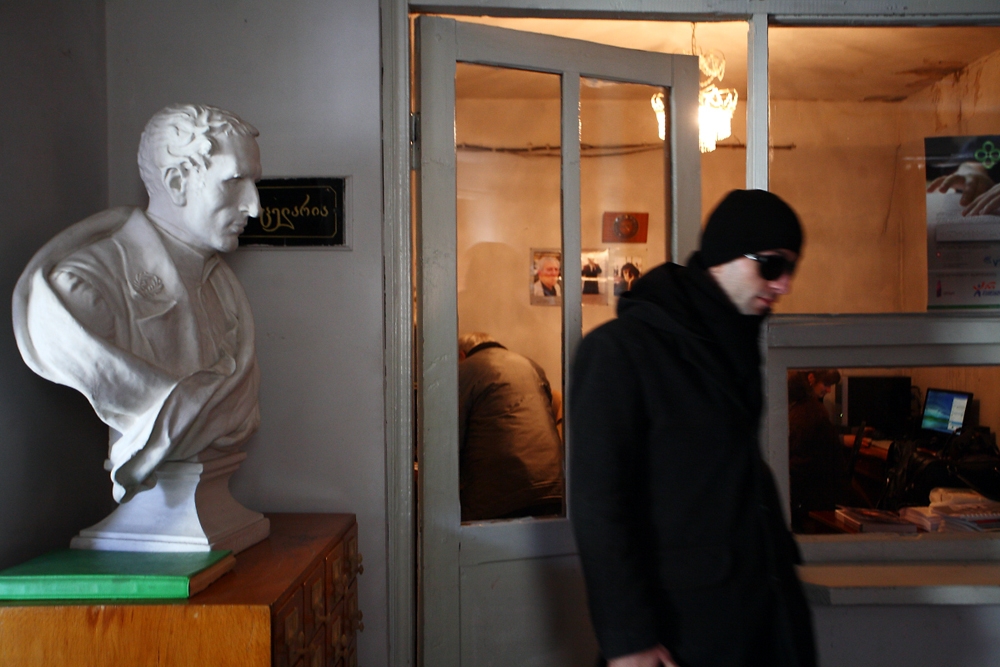 A bust of Louis Braille, creator of the tactile writing system, sits in the library for the blind in the Ponichala settlement. 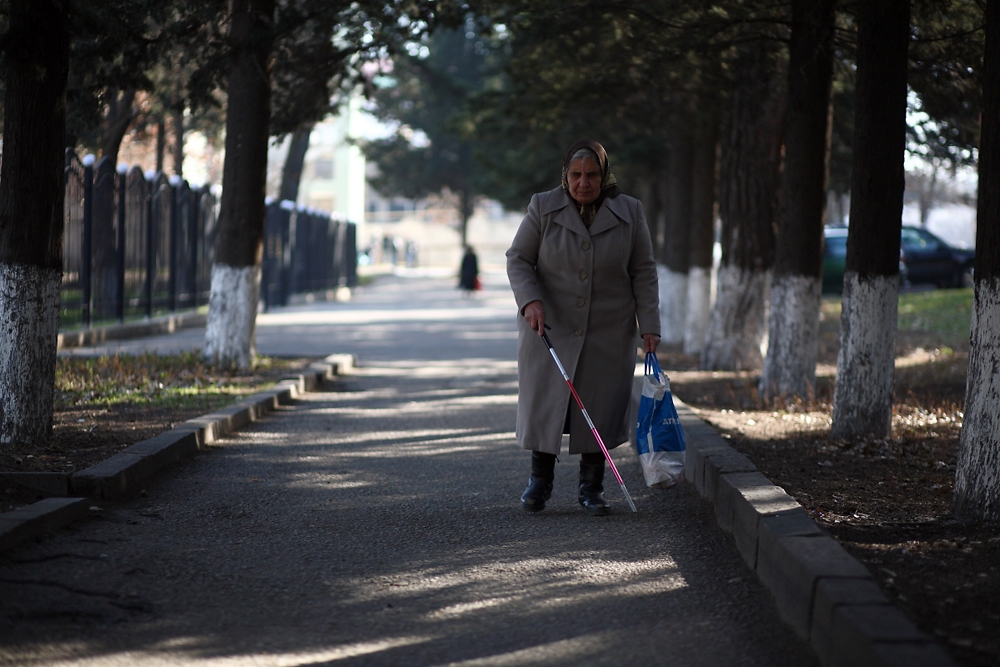 A resident of the settlement for the visually impaired walks home from the district's soup kitchen. 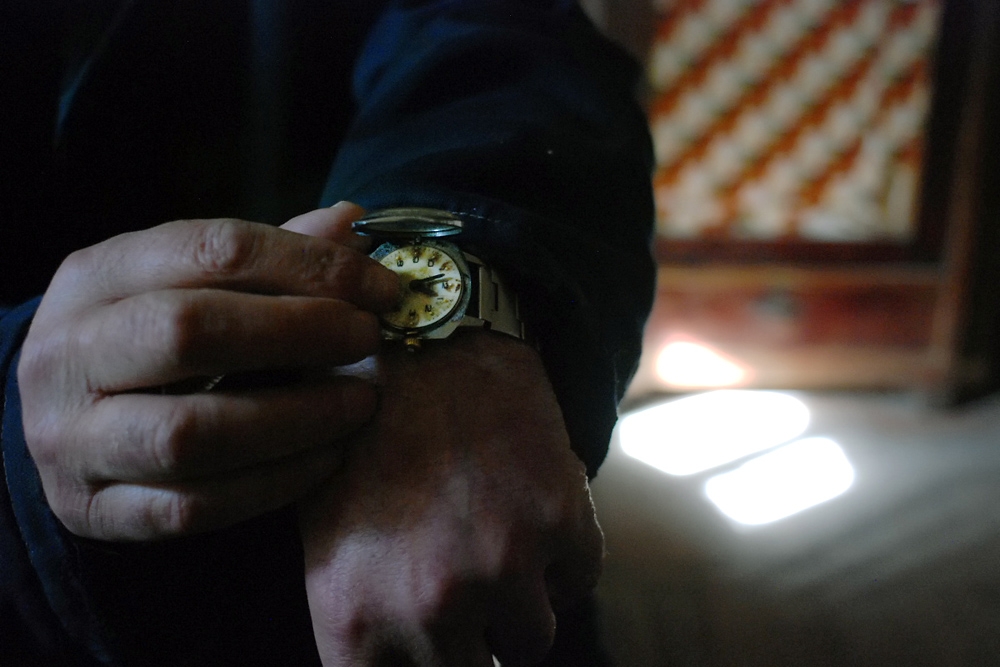 District resident Levan Jegadze checks the time on his braille wristwatch, which he received during the Soviet era. 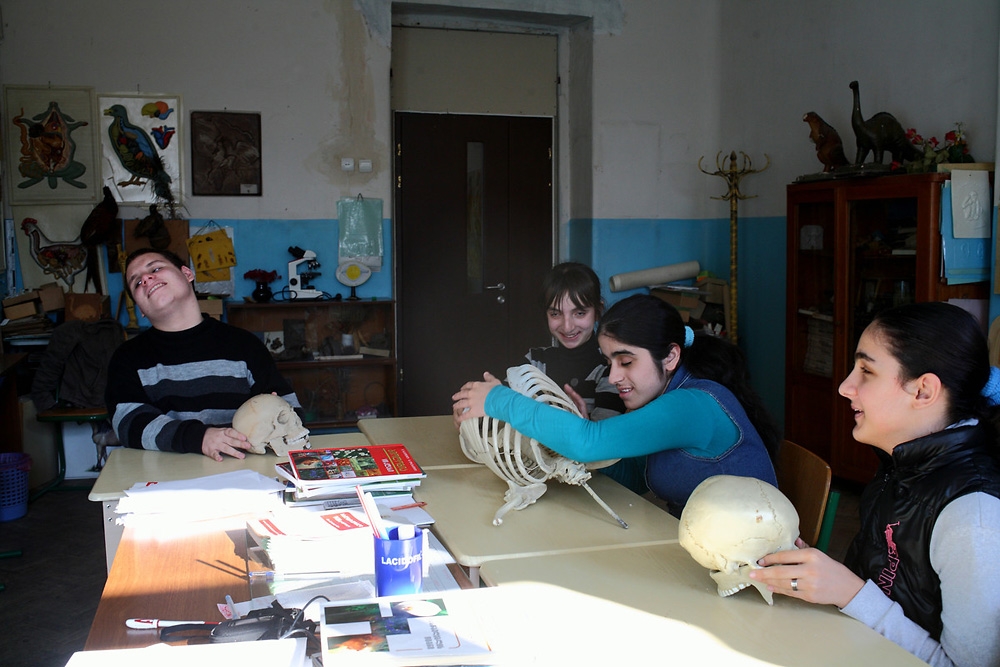 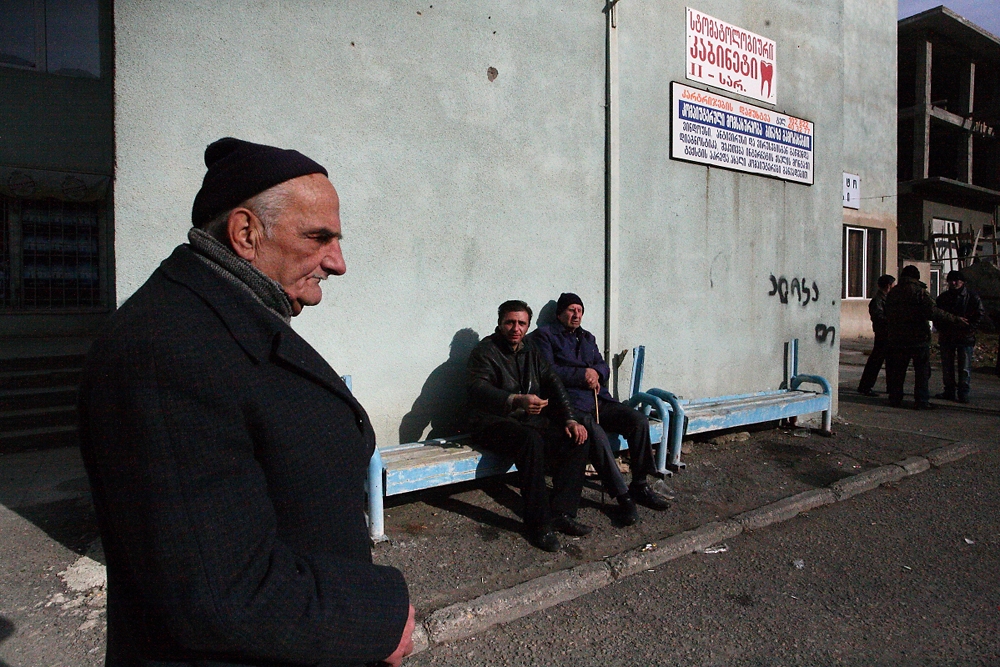 Residents of the Ponichala district find a sunny spot in front of the canteen to relax. 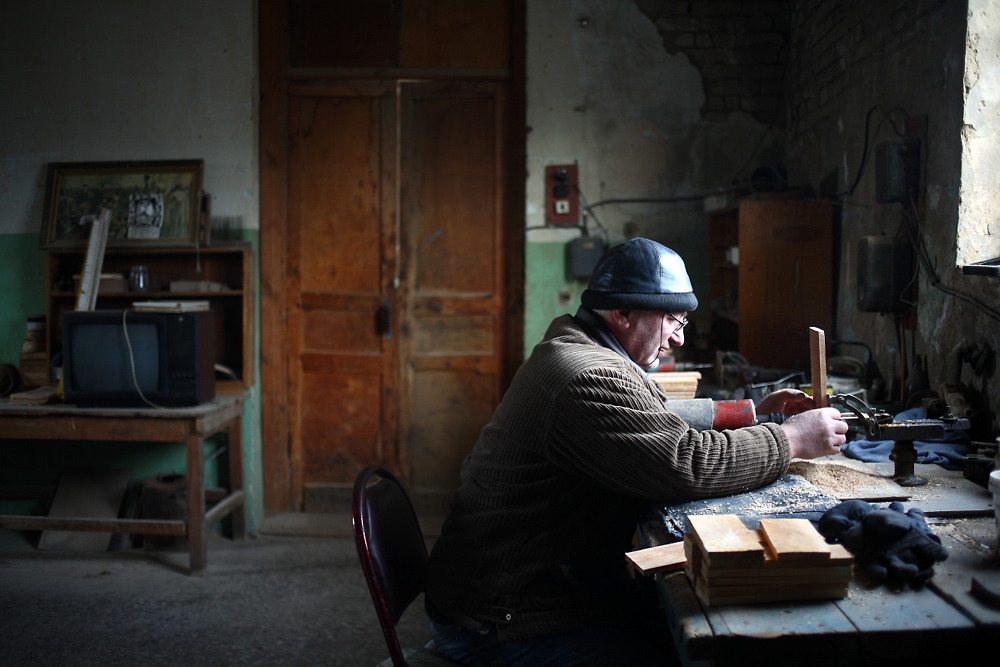 Gia Kimetsadze, a manager at a shoe-brush workshop, says brushes made by the blind are of better quality. 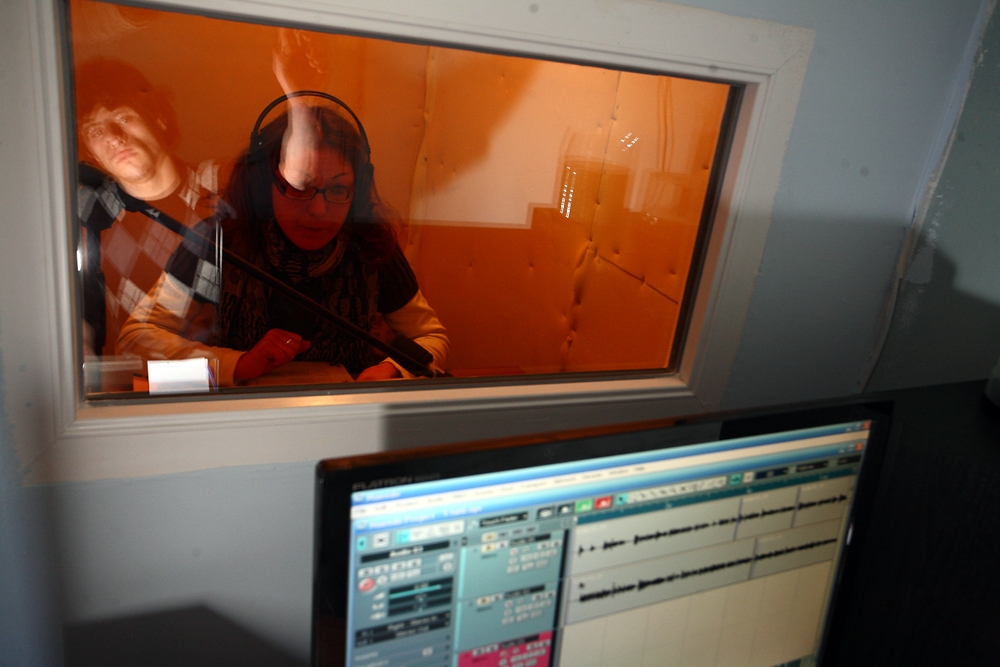 Natia Jikia records a spoken word album of a book for an audiobook section of the Ponichala library. 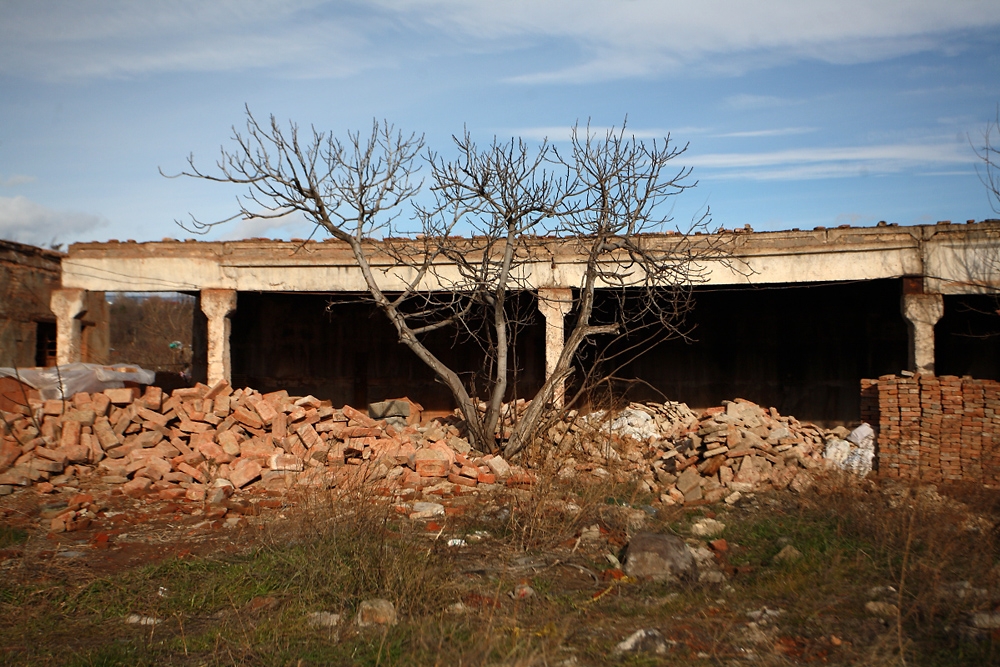 A ruined factory, where visually impaired people were employed in the Soviet times, used to produce brushes, brooms, and more. 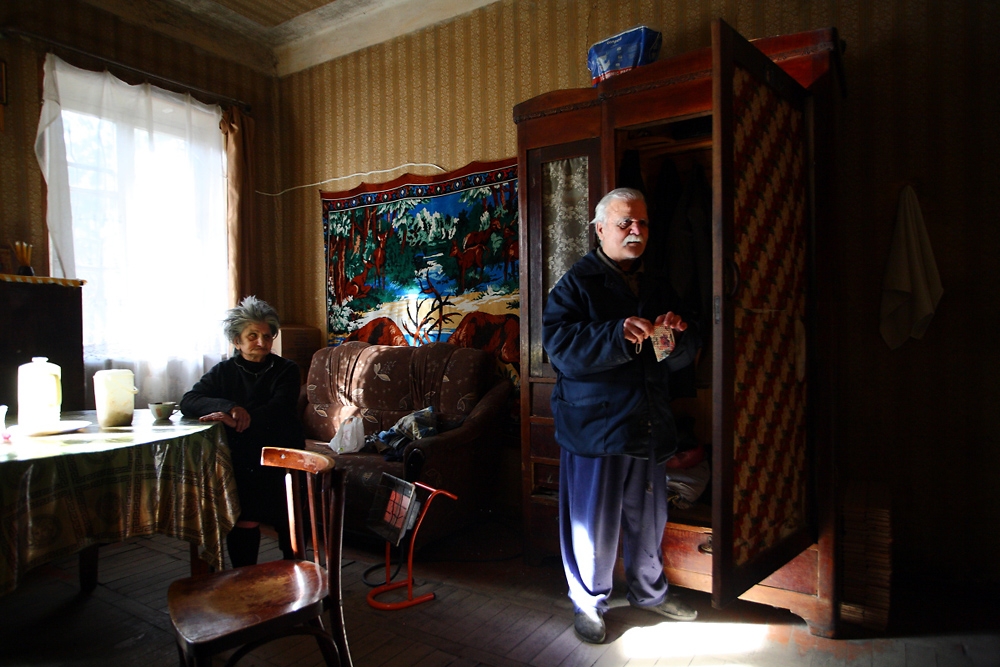 Levan Jegadze, a blind former factory worker, lives with his wife in a single room on a monthly pension of about $60. Students with the Tbilisi public school for visually impaired children rehearse for their concert at the Tbilisi conservatory. 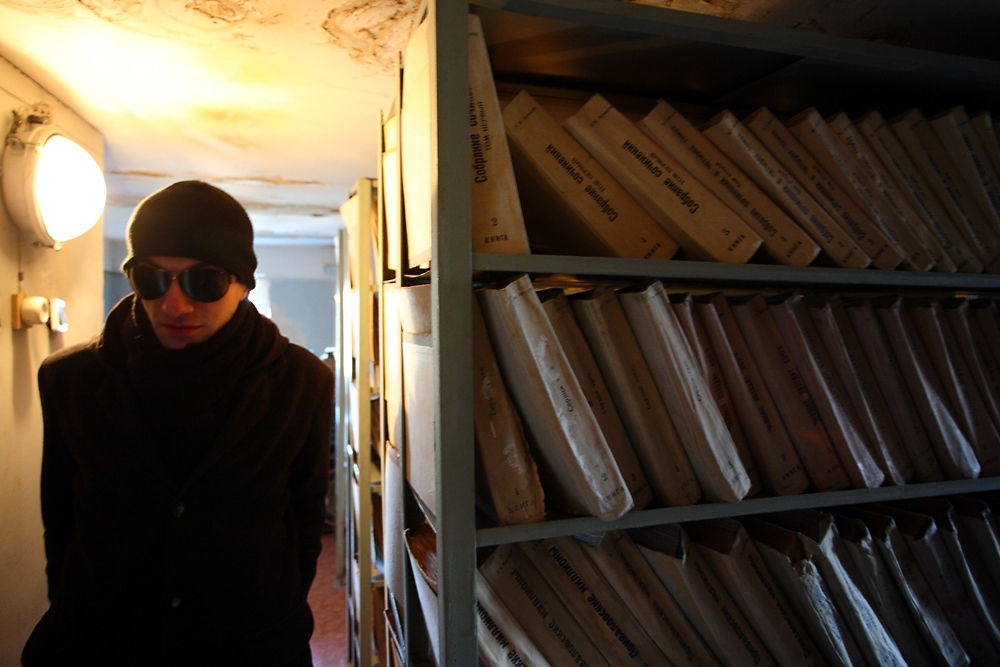 David Kviriliani, pictured standing in the library for the blind, was the first blind person to climb Georgia's Mount Kazbegi. 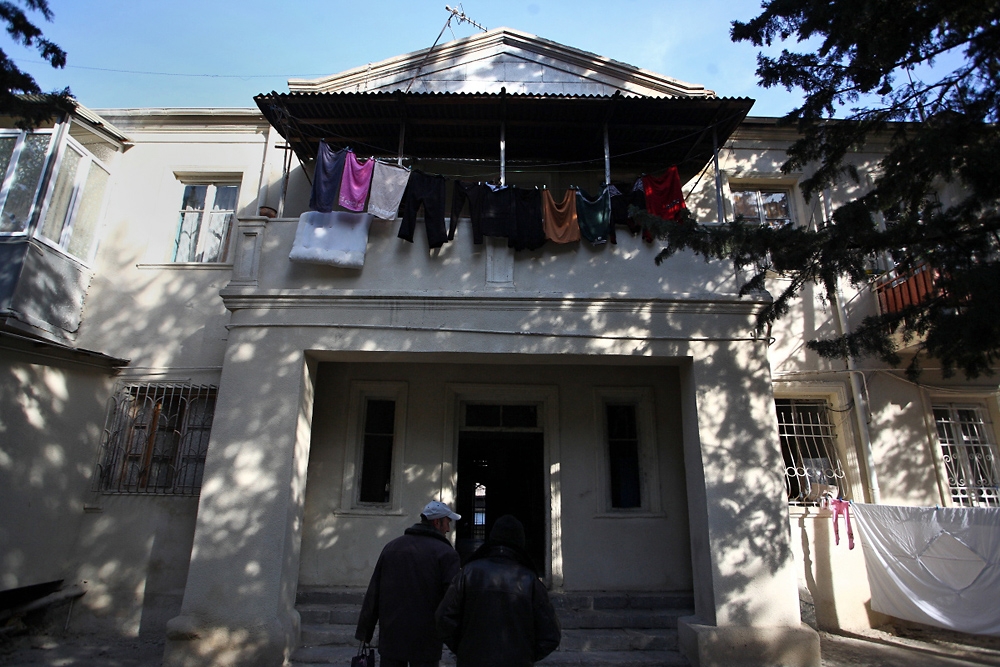 The two-story dormitories of the Ponichala settlement are slowly deteriorating inside. 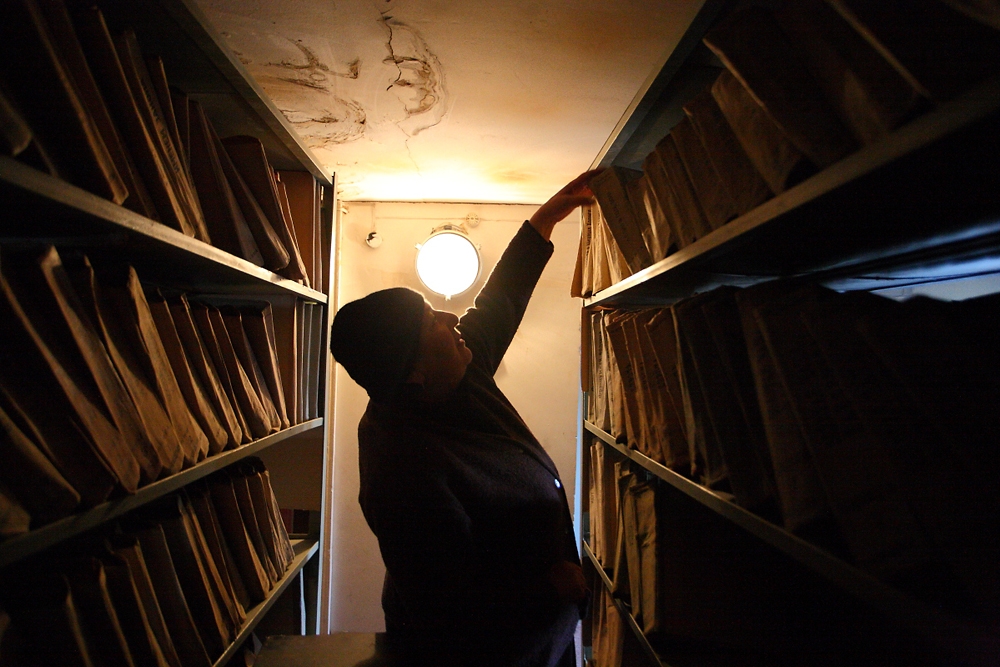 A library assistant takes out one of the 290 braille books requested by one of the blind residents. 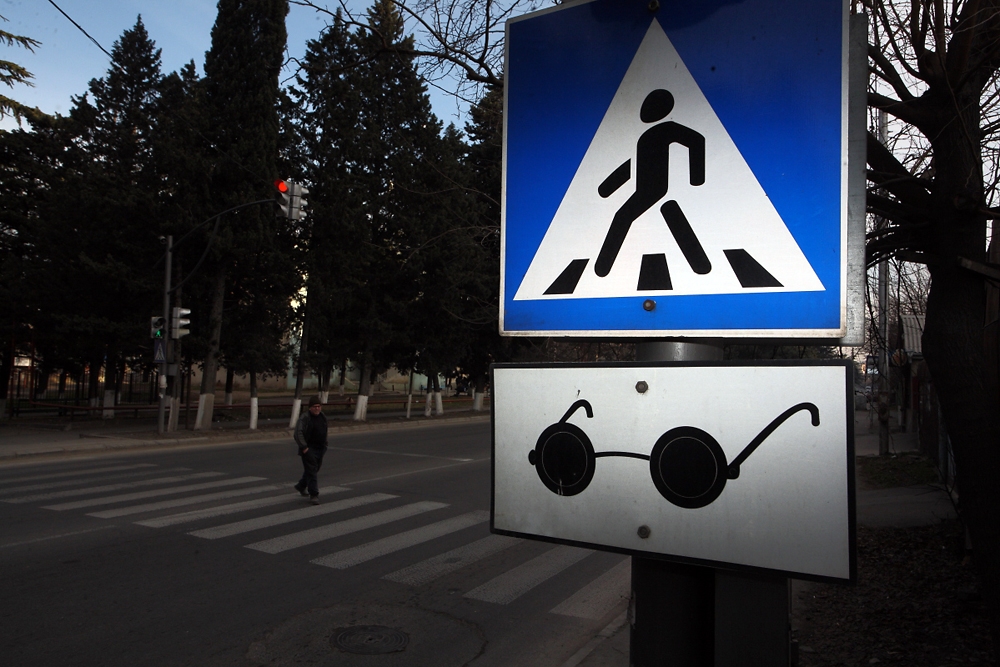 Pedestrians use a crosswalk in Ponichala.
prev
next

Every morning, a soup kitchen in Tbilisi's small southeastern suburban district fills up with people holding white canes in one hand and canvas bags in the other. After waiting in the line for a few minutes, they leave the canteen carrying a loaf of bread and a plastic container full of hot soup. Some stay by the canteen building, grouping in the spot warmed by the winter sun to discuss the latest rumors and political news. Others head back to their homes, scanning their way through the alley with their white canes.

The canteen is a part of the settlement located in Tbilisi’s district of Ponichala, where many residents are either completely blind or vision challenged.

Built in the early Soviet era, the district stretches along the highway connecting Tbilisi and Rustavi, an industrial town some 20 kilometers southeast of the Georgian capital. Initially, it consisted of a few two-story dormitories and the factory. Later a library and a cultural center were added to the settlement. Until the 1970s the area was surrounded by a wall that separated the settlement from the rest of the city.

There are polarized views on how and why the district was created. Some, like head of Vimegobrot (Let’s Be Friends) non-governmental organization Gia Jvarsheishvili, think that it was the policy of the Soviet government to conceal the existence of people with disabilities that sparked the idea of an enclosed area where Georgia’s sightless would be kept away from the Soviet utopia. “Factually it was a ghetto,” says Jvarsheishvili.

He says that even 20 years after the collapse of the Soviet system, Georgia’s blinds are still suffering from this policy. Except for this very settlement and the school for visually impaired children located in Tbilisi’s other district, no other designated infrastructure exists. However, according to Jvarsheishvili, a more important consequence of this policy is that in many cases the families of the blind, and sometimes blinds themselves, are ashamed to be exposed to the society. “For example, it’s quite common that parents of the children with vision problems don’t want them to use the white canes outside of the school,” says Jvarsheishvili.

The story of the Ponichala settlement for the blind dates back to the end of the 19th century, when a few Georgian philanthropists gathered their efforts to collect donations to build a school for visually impaired children. Built in 1890, the school housed classrooms, a dormitory, and a workshops where sightless children would learn how to make wooden handicrafts, like baskets and brushes. After graduating from the school many of them would stay, working as a craftsmen at the school workshop. The craftsmen worked for free, as the whole revenue from the wares was going to the specially founded Blinds’ Society. Many of the artisans had to also beg to make living.

In 1930s, the Soviet government allocated land outside of Tbilisi and presented it to the Blinds' Society. There, the society built a few dormitories and a factory, where all the artisans were inhabiting and working. At first the factory continued producing wooden handicrafts, but later on more complicated products, like automotive air filters and simple furniture were added to the product list.

In 1960-1970s the settlement gained a library, a cultural center, and a monthly newspaper. The current head of the library Amiran Ghoghadze worked for more than four decades for the Blinds’ Society, that was renamed to Georgian Blinds' Union in the 1990s. He says that the settlement united the visually impaired people, and made their life more comfortable as they lived close to the factory.

When asked about the purpose of the wall around the settlement, Ghoghadze said: “well, every private area was supposed to have a wall back then.”

One of the residents of the district, Levan Jegadze, had worked in the factory till its closure in the beginning of 1990s. Born in 1940, Jegadze lost his eyesight in an accident when he was ten years old. First, he was transferred to the school for the visually impaired, but already at the age of 17 he found a job at the factory and moved into a small dormitory room. Since then, he has been living there. Jegadze says, that he has worked in every possible workshop in the factory, and he really misses those days. “We’ve been making our own living back then,” he said. “Now, during the day, you might not see many blinds around - many of them are out in the city, begging.”

Luckier than some other residents of the district, Jegadze and his wife, also visually impared, have children who can see and take care of them.

In order to preserve the non-functioning factory building from a gradual decay, Georgian Blinds’ Union, has sold the 49% of its ownership to a private school and also rented the former workshops. While most of the workshops nowadays are rented by car mechanics and locksmiths, one still produces brushes and brooms. Gia Kimetsadze, the workshop’s tenant, used to work as a manager at the factory back in the day. In 1990s he was among the first to rent a workshop in the non-functioning factory, and the only one to re-employ the blind. Until last year, a blind couple worked in his workshop just like in old days. But first the wife and then the husband died and since then Kimetsadze has been working on brushes on his own. He still plans to hire more blind employees in his workshop.

“They’re perfect for the job, and the brushes come out perfect,” he says. “They work with their fingers, not eyes.”