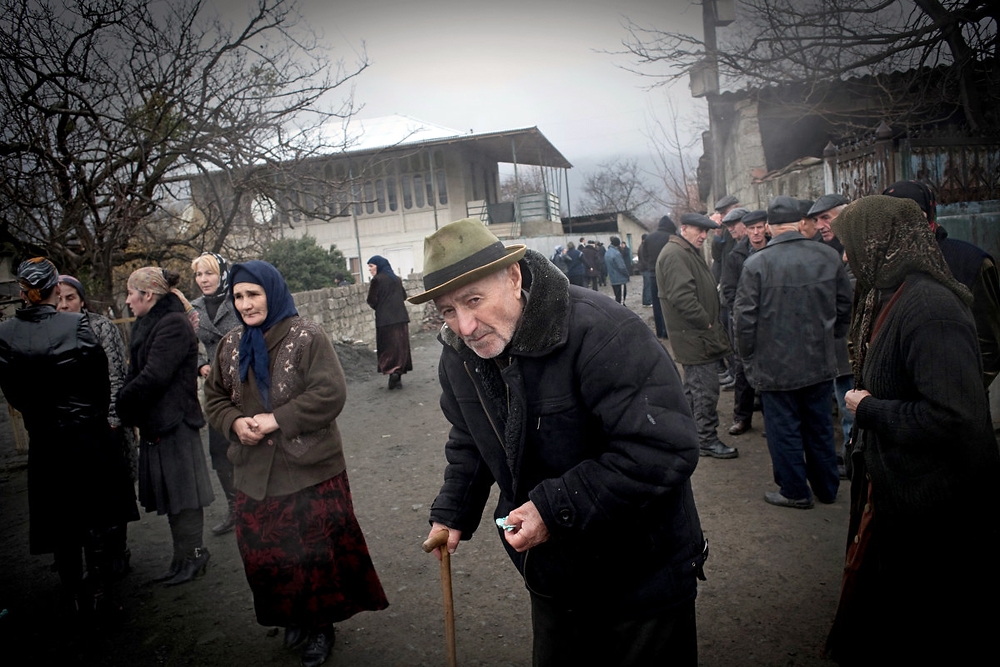 Georgian Muslims from the Pankisi region are known to be fighting in Syria. (Photo: Justyna Mielnikiewicz)

His nom de guerre is Omar al-Shishani (Omar the Chechen), and he has gained a fearsome reputation as a commander in the dreaded terrorist jihadi group, the Islamic State of Iraq and Syria. But al-Shishani is no Chechen. His birth name is Tarkhan Batirashvili, and he is a citizen of Georgia from the Pankisi Gorge, a remote corner of this South-Caucasus country.

Located 161 kilometers northeast of the Georgian capital, Tbilisi, at the foot of the Greater Caucasus Mountains not far from the border with Russia’s restive region of Chechnya, Pankisi is a 10-kilometer-long valley predominately populated by Sunni-Muslim Kists, an ethnic group with close cultural ties to the Chechens and Ingush.

The presence in Syria of Pankisi-born Kist fighters like al-Shishani has stoked suspicion that the region is a hotbed of Islamic militancy, as well as a conduit for jihadists from Russian regions in the North Caucasus making their way to Syria. Many locals in Pankisi, as well as Georgian political analysts in Tbilisi, strongly dispute the notion that the area is presently a source of jihadist mischief.

Maya Kavtarashvili, a local official in Duisi, Pankisi’s main village, contended that because of persistent poverty and widespread unemployment, it is not unusual for young men in Pankisi to head to Turkey, Georgia’s western neighbor. It also just happens that Turkey is a jumping off point for jihadists striving to enter Syria and join the fight against President Bashar al-Assad’s regime. “We just know that people went to Turkey for work. We don’t know anything about fighting,” Kavtarashvili said.

A friend of Kavtarashvili, who spoke on condition of anonymity, acknowledged that Syria was the intended destination of some who left. She estimated the number at “50 to 60, no more,” including her nephew, adding that most of the Syria-bound men left “few years ago” when the fight against Assad was just getting started. “Nobody has left recently,” she insisted. “We would know that.”

Shota Utiashvili, a former head of the Georgian Interior Ministry’s Department of Analysis, also estimated that no more than 100 Pankisi men have gone to fight in Syria.  Most so-called Chechen fighters in Syria come from the Chechen diaspora in Europe and the Middle East, asserted Utiashvili, currently a fellow at Free University Tbilisi’s Center for Policy Analysis.

Those trying to downplay Pankisi’s connection to Islamic militancy have to contend with the region’s recent history. During Moscow’s wars against Chechen separatists in the 1990s and early 2000s, Pankisi was a sanctuary for thousands of refugees from Chechnya. Chechen and Arab militants also used the area as a safe haven from which to launch insurgent strikes into Russian territory. Some of those fighters allegedly had ties to al-Qaeda.

Accompanying the influx of outsiders to Pankisi during those years was a more conservative interpretation of Islam. Many locals labeled newcomers “Wahabbis” because of their preference to wear long beards and skullcaps, and for their harsh criticism of Pankisi’s traditional blend of Sufi, pagan and Christian customs.

A turning point came after the Rose Revolution in Georgia in 2003, when a Georgian government led by Eduard Shevardnadze, the former Soviet foreign minister, was replaced by zealously pro-Western Mikheil Saakashvili. By 2004, with American help, Georgian security forces largely cleared paramilitary fighters out of Pankisi and broke up criminal networks operating there. Subsequently, most Chechen refugees either emigrated abroad, or returned home.

Even so, the mosques that sprang up to serve the so-called Wahabbis remained in operation. It is possible that such mosques played a role in radicalizing Tarkhan Batirashvili and others now fighting in Syria.

According to locals, Tarkhan Batirashvili, who was born in the hamlet of Birkiani about four kilometers from Duisi, has a mixed religious and ethnic background. His late mother was a Kist, but his father, Temur, is an ethnic Georgian and a Georgian Orthodox Christian.

As the BBC’s Middle-East service has reported, Tarkhan Batirashvili fought for Georgia against the Russian army during the two countries’ five-day war in 2008. His conduct during the conflict earned him a promotion to sergeant, but after contracting tuberculosis he was discharged from the Georgian army in 2010.

In a July 8 interview, Temur Batirashvili told the BBC’s Russian service that his son had been Georgian Orthodox until his army discharge. His conversion to radical Islam seems to have been catalyzed by a stint in prison following conviction for illegal weapons possession; tuberculosis prompted his early release in 2012.  “Papa, it seems nobody in this country needs me,” his father claimed Tarkhan told him before leaving that same year for Syria.

Temur Batirashvili could not be reached for additional comment.

Whatever difficulties Tarkhan Batirashvili had with tuberculosis in Georgia, the condition does not seem to have hindered his ability to fight in Syria. In roughly one year, he rose from a mujahideen foot soldier with limited battle experience to leader of the Jaish al-Muhajirin wal Ansar, or Army of Emigrants and Supporters, which reportedly has a large number of North-Caucasus fighters in its ranks. The group reportedly split in November 2013, after Batirashvili swore allegiance to ISIS.

Fellow Pankisi native Ruslan Machalikashvili allegedly was among those senior fighters who broke ranks with Batriashvili over the decision to ally with ISIS. Machalikashvili was killed earlier in 2014 during the storming of Aleppo’s central prison, according to the Russian news service Interfax.

In Pankisi, Machalikashvili is remembered broadly as an unremarkable man who allegedly flirted with crime, and left for Turkey with his family over a decade ago.

For some in Pankisi, the topic of young men from the region going to fight in Syria is a source of pride. “They said Batirashvili was too sick to fight for Georgia, and now, look at him, a general of his own army in Syria,” one woman boasted.

But for 55 year-old Khizir Margoshvili, an unemployed local, war is a bitter topic. “Pankisi wants peace. We don’t want to fight anybody,” he said.

--An earlier version of this story gave Tarkhan Batirashvili's age as 45 years old. That information was removed, pending official confirmation of his age.