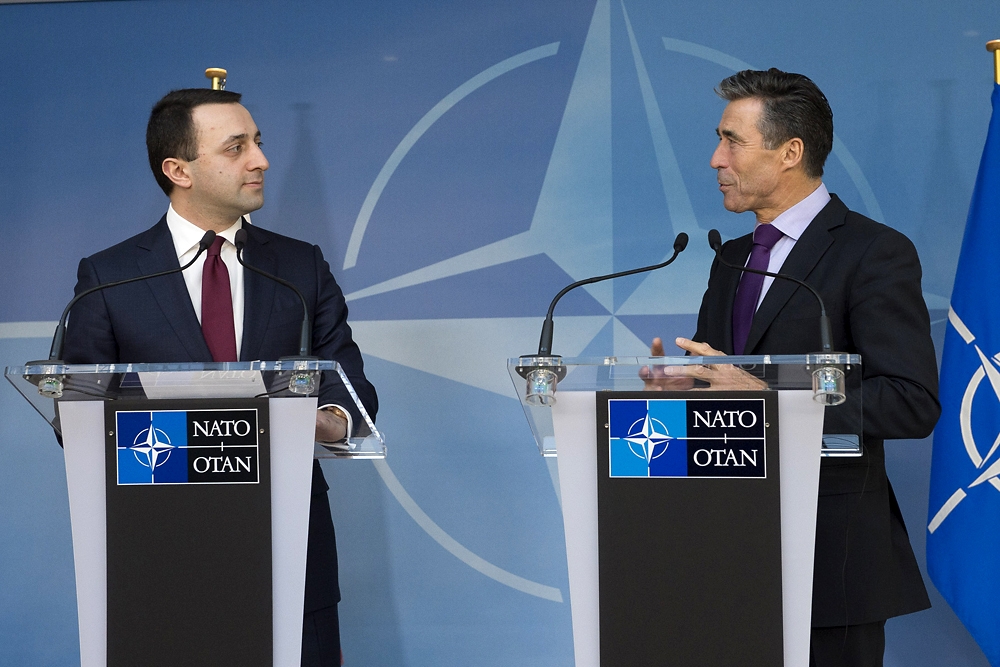 Can Georgia take another step closer into NATO? (Photo: NATO)

Confronted with the most daunting security challenge since the end of the Cold War, North Atlantic Treaty Organization leaders are preparing to gather in the United Kingdom for a September 4-5 summit. Officials in Georgia – which, like Ukraine at present, has direct experience with Russian aggression -- want NATO to show greater resolve in confronting the Kremlin’s creeping expansionism.

Georgia has spent the last decade aspiring to join NATO in the belief that Atlantic alliance membership would offer a strong deterrent to Russian bullying. (Russian troops continue to occupy portions of Georgia just over six years since the two countries fought a five-day war). Yet, the alliance’s response so far to Russia’s belligerent actions in Ukraine has left policymakers in Tbilisi underwhelmed.

“Ukraine has made it exceptionally clear . . . how much is at stake,” said Georgian State Minister for European and Euro-Atlantic Integration Alex Petriashvili. It is “no time to falter now.”

Discontent with what Petriashvili described as NATO’s “wait-and-see measures” toward Russia on Ukraine appears to run strong within Georgia’s political establishment.

“Humankind should not accept some kind of twisted international context in the areas of the former Soviet Union,” argued Georgian President Giorgi Margvelashvili. “If we are going to tolerate this on [a] case-to-case basis  . . . we will have case-to-case problems. “

Petriashvili and Margvelashvili made those comments during a high-profile September 1 conference in Tbilisi on state building in Georgia. Frustration with the United States’ role on Ukraine also bubbled up during the gathering.

“[US President Barack] Obama and other western leaders have not shown a real willingness to lead public opinion in this respect,” noted moderator Francis Fukuyama, a Stanford University political scientist.

US Ambassador Richard Norton, who appeared to have left the conference, did not respond. In earlier remarks, he re-emphasized Washington’s support for Georgia as a “model of what democracy can and should look like … in any part of the former Soviet space.”

NATO in recent years has appeared reluctant to antagonize Russia by providing a clear roadmap to Georgia toward full NATO membership. Under the present circumstances, some Georgian officials now feel Tbilisi should be more assertive in seeking a commitment from Brussels.

Georgia’s former NATO permanent representative, Grigol Mgaloblishvili, a onetime prime minister now employed at the National Defense University in Washington, DC, was among those calling on Tbilisi to do more to press its membership case with NATO. Otherwise, he added, the Wales summit could prove a “squandered opportunity.”

Defense Minister Irakli Alasania stressed that making gains on the membership front is “not about Georgian preparedness. “

“It’s about . . . NATO’s willingness to commit themselves fully to the values of democracy and [a] Europe strong and free,” he stated.

He called for a “very strong military deterrent” to be added to the response to Kremlin actions in Ukraine.

NATO Secretary General Anders Fogh Rasmussen has offered a public sneak peak at what the alliance may be ready to offer Georgia, namely a “defense-capability-building mission.” In addition, the secretary-general has suggested efforts to increase the inter-operability of NATO and Georgian forces, along with a string of maybes, including a regional military training center, NATO-partner exercises and an expanded liaison office.

Panelists did not comment on Rasmussen’s remarks, which became public later.  The Tbilisi conference was organized by Stanford University’s Center on Democracy, Development, and the Rule of Law, and the Economic Policy Research Center. It was sponsored by the Open Society Georgia Foundation (OSGF), the US Embassy in Tbilisi and the Bank of Georgia University. [Editor’s Note: OSGF is part of the Soros Foundations network. EurasiaNet.org operates under the auspices of the new York-based Open Society Foundations, a separate entity in the network].

At the conference, British Ambassador to Georgia Alexandra Hall sought to reassure Georgian leaders that integration with the Euro-Atlantic community is the right choice. “It’s a marathon, not a sprint,” she said of Georgia’s work for integration with Europe. “Don’t give up on us yet. I think we will get there.”

Elizabeth Owen is EurasiaNet.org's Tbilisi-based news editor for the Caucasus, Moldova and Turkey.