Georgia Looks to India for a Cash-Rich Cinema Comeback 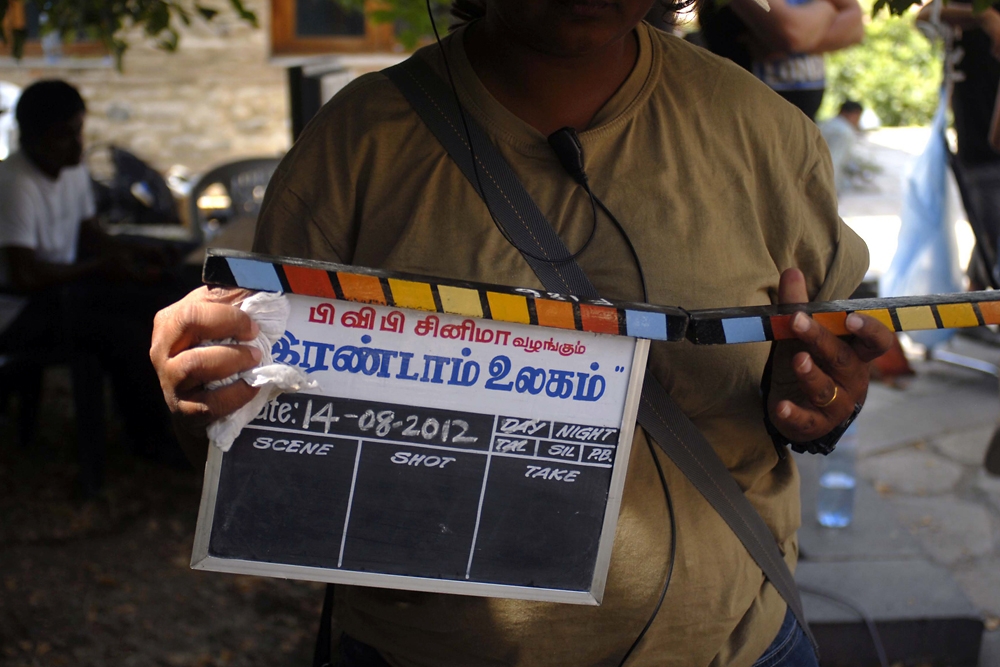 Crew members in Sighnaghi, Georgia, prepare to shoot a scene for "Second World," a Bollywood feature film starring Jamshad Cethirakath and Anushka Shetty and the second large Indian movie to be made in Georgia. The Georgian government and the country's growing domestic film industry is hoping more Indian - and other foreign - film productions will help create employment and opportunities for Georgian actors, directors, and producers. (Photo: Molly Corso)

Big on mountains and romantic vistas, the South Caucasus country of Georgia this year has a starring role in two Indian films; an international prominence that many Georgian film professionals hope could advance the fortunes of their long-struggling industry.

In the Tamil-language gangster flick “Billa 2,” released in July, the capital city, Tbilisi, holds center stage. In “A Second World” (“Irandam Ulagam”), a Telugu and Tamil-language fantasy film by director Selvaraghavan, the regions of Tusheti, Kakheti and Samtse-Javakheti form an alien world where star-crossed lovers find parallel versions of themselves.

But Indian and Georgian directors and producers alike warn that Georgia will need more than captivating scenery and English-speaking crews to attract the cinematic big-time.

Georgia’s interest in attracting India’s film industry, one of the world’s largest, started during the filming of “Five Days of War” (also known as “Five Days of August”), Hollywood director Renny Harlin’s 2011 saga about the 2008 Russia-Georgia conflict. The $20-million “Five Days” may have bombed at the box office, but it left a lasting impression in Tbilisi about foreign films’ ability to bring investment to Georgia’s film industry, which flourished in Soviet times.

Films from Bollywood, the Mumbai-based epicenter of India’s film industry, are known for mega-million-dollar investments and dedicated fans who travel to movie settings.

While neither “Billa 2” nor “A Second World” is from Bollywood, Keti Bochorishvili, the former Georgian National Investment Agency director who spearheaded Georgia’s courtship with Indian filmmakers, predicted that the films will have an eventual “pulling effect” on bigger-budget productions. (Bochorishvili now serves as Deputy Minister of Economy and Sustainable Development.)

“A Second World’s” producer, Vinay Chilakapati, said that he was drawn to Georgia after hearing about its low production costs and picturesque landscapes from “Billa 2” director Chakri Toleti.

Attracted by southwestern Georgia’s 12th century Vardzia cave monastery, the eastern region of Tusheti’s untamed mountains, and the lack of visa requirements for Indian citizens, Chilakapati and his team opted for Georgia over locations in Brazil and the US state of Utah.

So far, the $4.5-million film appears to have been a bonanza for the villages in Tusheti, the wine region of Kakheti, and near Vardzia that served as locations. Chilakapati estimates his production company, PVP Cinema, has spent at least 20,000 lari ($12,195) a day on food, lodging and salaries since late May.

He warned, though, that Georgian moviegoers might not recognize the locations after five moons and “intensive” colors are added to the film post-production.

But he predicted that, with a projected audience in the tens of millions, the film will help put Georgia on the map for Indian viewers. “The awareness [of Georgia] has increased,” Chilakapati said. “[O]ur movie definitely will [add to that awareness].”

The fantasy movie, however, is a far cry from Georgia’s own cinematic traditions, anchored in historical dramas and documentary-style realism.

But film professionals like Giorgi Melikashvili, a locations manager working on “A Second World,” believe it nonetheless makes a valuable contribution to the Georgian movie business. “[I]t is a very good chance for Georgian professionals to come with the Indian ones and make some improvements in their skills,” Melikashvili said.

Indian filmmakers are not the only ones attracted by Georgia’s efforts to revive its film industry.

With funding from the Council of Europe’s Eurimage film-financing program, French production company MPM Film is coming this year to make a feature with Tbilisi-based Cinetech, Ltd. Details are not available.

Meanwhile, some Georgian film professionals are returning home from abroad.

Los-Angeles-based filmmaker Nika Agiashvili and his father, producer Davit Agiashvili, used their Hollywood ties to bring actors Ron Perlman and Malcolm McDowell to the Georgian capital for their “Tbilisi, My City” feature film, slated for a worldwide opening in September.

But the fresh interest does not mean that a shoot in Georgia comes trouble-free. After 90 days of filming, Chilakapati, now working in the much-hyped Kakheti village of Sighnaghi, said he has gained knowledge about the country’s disadvantages as a film location.

The Vardzia caves are part of a Georgian Orthodox monastery where filming is prohibited. And while working in Georgia initially appeared to be much cheaper than in Brazil or the US, Chilakapati noted that 18-percent value-added taxes, 20-percent income taxes, a limited local talent pool, and the need to transport equipment from India amounted to only a 10-percent savings in production costs.

“Compared to what we are used to back home, it is a bit of a challenge,” he said. “In 15 years or so, I think all the elements will be lined up, so it will be much more smooth sailing than what is going on right now.”

He stressed that incentives like tax rebates are a must to attract foreign studios.

An incentive package that includes such features has, in fact, been developed, according to Georgian National Film Center Deputy Director Salome Sepashvili. She described Indian filmmakers’ experiences as useful for lobbying for the measures, but did not expect immediate results.

Hurdles aside, filmmaker Nika Agiashvili nonetheless maintains that Georgia’s cinematic renaissance is within range. “I guess it's a little bit of timing and luck, but I think we are very close,” he said.