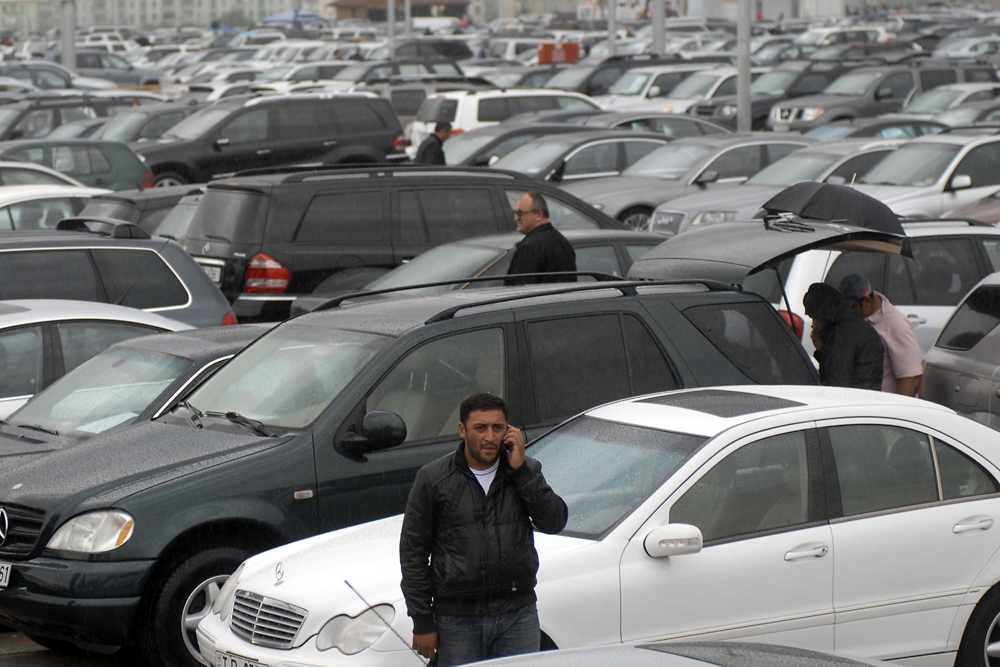 Luxury cars are often seen as a sign of economic growth, but, in Georgia, the BMWs and Mercedes-Benzes tell a story about culture rather than the economy.

As elsewhere in the former Soviet Union, Georgian car ownership has been growing steadily, increasing by just over seven percent per year between 2008 and 2011, the latest year for which vehicle registration data is available.

With average household incomes at just 788.40 laris per month ($475.83), it might make sense that a moderately priced Opel Vectra, a family sedan, accounts for most of Georgia’s 800,000 registered vehicles. But in Tbilisi, home to nearly 39 percent of Georgia’s car owners, it is the black Sports Utility Vehicle (SUV) that rules the street.

Beka Tsintsadze is a 28-year-old home-appliances salesperson from a middle-class Tbilisi family. His monthly salary of about $700 is just slightly less than that of his parents, but, nonetheless, somehow sufficient for a glittering, $25,000 Range Rover Sport, a midsize 2008 SUV.

Wearing oversized Louis-Vuitton glasses and a contented smile, Tsintsadze shared his secret. “I had some savings . . . borrowed a little from friends. My parents also gave me some money, and the rest is a bank loan.”

He is not at all daunted by the fact that payments on the five-year loan and filling up his 4.4-liter V8 engine (at 2.10 laris ($1.27) per liter for premium gas, and 100 kilometers per 15 liters) will be guzzling away much of his annual salary for the foreseeable future. Friends and neighbors approvingly nod whenever he benevolently displays his sleek, black beauty.

“You need a good car to get around in this city, or to travel to the mountains,” he reasoned. A compact, budget SUV that also can handle Georgia’s often-challenging rural and urban roads would not do. It had to be “at least” a Range Rover.

Similarly, 37-year-old Tbilisi architect Vato Nozadze, who supports his parents, unemployed wife and two children on an average monthly salary of 1,100 laris ($663.84), bought a BMW X5 Crossover Utility Vehicle for $15,000 only to convert it from petrol to natural gas -- a popular trend in Georgia -- because “it is an expensive car.”

These two men are not eccentric exceptions. Georgians owed roughly $34 million in car loans as of April 2013, according to the National Bank of Georgia. Car owners also fork out serious amounts of money for pricey vanity plates (up to 10,000 laris or $6,035) even if it means borrowing money from a bank.

The car-related paradoxes do not end there. Georgia does not manufacture cars, but, nevertheless, automobiles are the country’s single biggest export. But while the latter puzzle can be explained by geographical location and a buyer-friendly, re-export car market, the reasons for Georgians’ passion for cars they cannot afford are more complex.

Commentators think much of it has to do with a desire to project status – a deeply ingrained instinct in this country of just 4.48 million people. In Soviet times, the stereotypical Georgian would leave a generous tip to a taxi driver or a waiter, whether or not his wallet warranted the largesse. Now, with a small middle class emerging and dollar-denominated bank loans available, the arriviste thinking is back and it drives a BMW.

“Getting a big, expensive car is the thing to do, so there is a little bit of social pressure going on here,” said Niko Nergadze, a commentator at the Georgian Service of Radio Free Europe/Radio Liberty. “These types are not looking into their wallets, but are, rather, thinking about what others will think about them.”

What others think of them can, however, enhance Georgians’ safety. In a country where traffic resembles an intensive go-cart race, prestigious big cars get the right of way.

A 306-percent increase in monthly salaries since 2004 also plays a role in prompting the decision for a VIP-vehicle. “In historically rich countries, where people tend to be comfortable with their wealth or the lack of it, pragmatism is a value,” noted social psychologist Gaga Nizharadze, but “Georgia has always been a poor country . . .”

Mothers, too, have something to do with the big-car syndrome. “Motherhood in Georgia is a lifetime job,” Nizharadze continued. “People start living independent lives much later than in western cultures. What you get as a result is immature behavior, and exorbitance is a result of that.”

Government officials also have had difficulty restraining their desires to vehicles priced to fit their pockets.

According to a report from anti-corruption watchdog Transparency International Georgia, the government of Zugdidi, the gritty capital of the western region of Samegrelo, spent over 687,170 laris ($410,000) for 12 SUVs in 2012. A 124,400-lari ($75,000) fully loaded Toyota Land Cruiser 200, complete with a refrigerator and 14-speaker sound system, led the cortege.

Granted, nominal attempts at budgeting have occurred. In 2010, amidst the global economic crisis, Georgian President Mikheil Saakashvili ordered officials not to purchase cars above 15,000 euros ($19,564). But, two years later, investigative journalists from Studio Monitor found that the government was still spending “hundreds of thousands of laris” on SUVs.

Now, under Prime Minister Bidzina Ivanishvili, those SUVs are being auctioned off in an attempt to break with this auto addiction. But it may do little to change popular choices. So far, braggadocio drives side by side with economy in Georgia.

Giorgi Lomsadze is a freelance journalist living in Tbilisi. He is a frequent contributor to Eurasianet's Tamada Tales blog.