LGBTQ activists succeeded in holding a small demonstration in Tbilisi in spite of threats from radicals and police indifference. 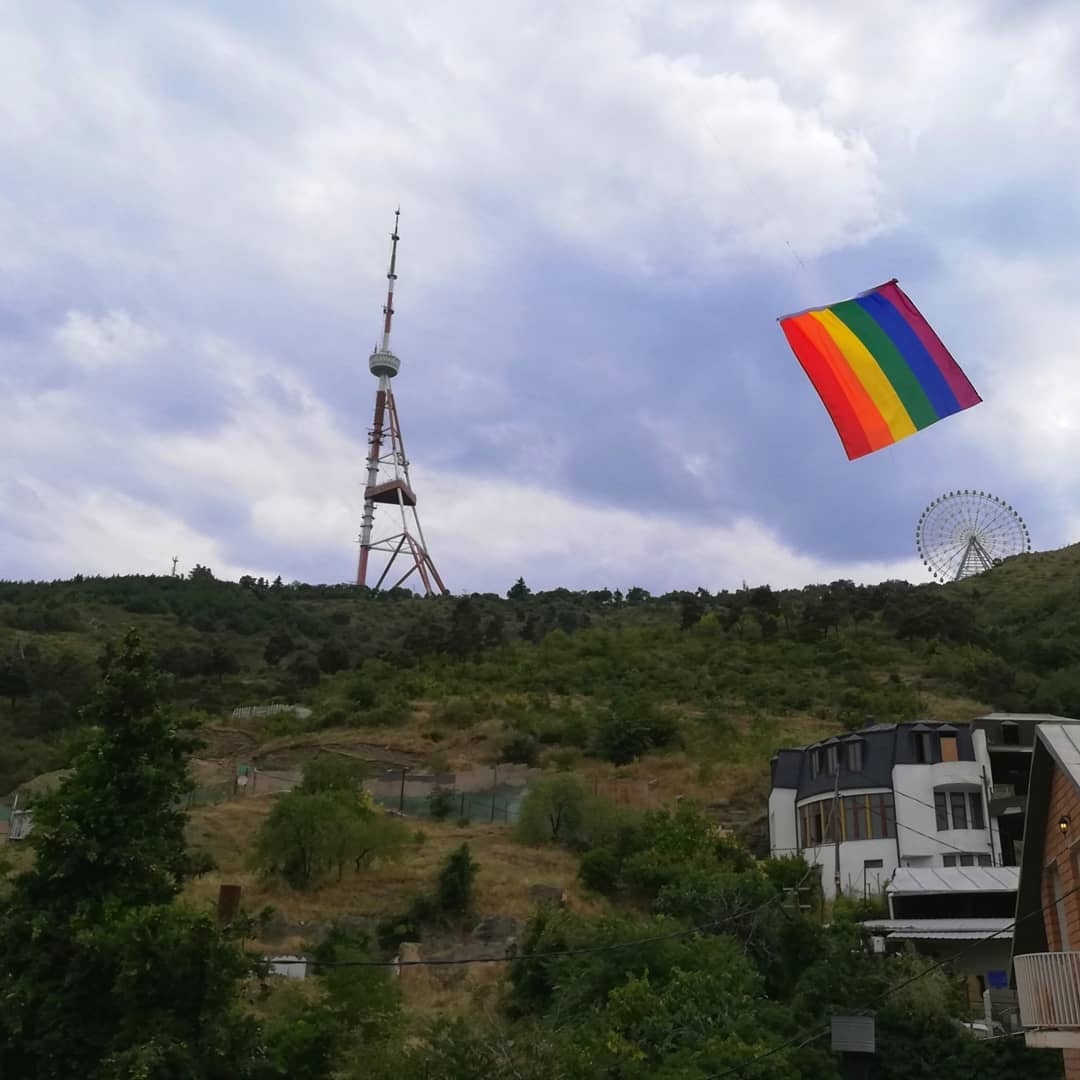 July 8 was a busy day for Levan Vasadze, a homophobic Georgian knight. Gay Pride was coming to Georgia for the first time, and he had made it his life’s goal never to let that happen.

Word was out that LGBTQ activists would finally be holding a Pride event, delayed for more than two weeks after threats from opponents and then being overshadowed by massive anti-government protests. For Vasadze, the battle lines were drawn.

He mobilized what he calls his “legion” – able-bodied, conservative male supporters – and they massed in the center of Tbilisi to foil the planned LGBTQ manifestation. “As long as there are men in Georgia, we will not let them hold a parade,” Vasadze told reporters. He also issued a dark warning: “There will be violence and bloodshed.” He asked his supporters to wear white armbands for identification and to wield belts to use against Pride participants.

The traditionally minded and often traditionally attired businessman is the sworn enemy of the nation’s fledgling LGBTQ rights movement. Vasadze is often referred to as “knight” – he was in fact knighted by Georgia’s royal family – and is known for his livid anti-liberal invectives, often leavened with abstruse concepts and made-up Latin words. “I’m going to call these types homo-urabincus-hedonicus, or homo-urbanicus, or perhaps simply urbano-hedonicus,” he once famously said in a j’accuse against social liberals.

On July 8, he put on a white shirt and a black vest, hoisted a large wooden cross and, joined by several priests and right-wing groups, set out on a patrol of the center of Tbilisi. They proceeded to spend much of the day playing hide-and-seek with the LGBTQ rights activists, who did not publicly disclose the venue of their planned rally, which they had dubbed the March of Dignity.

After hunting in vain for the LGBTQ activists downtown, Vasadze received word that Pride was happening in a different corner of the city, in front of the Interior Ministry. The knight and his retinue, followed by camera crews, embarked on a chase, incongruously using public transportation – the 40 bus. By the time the bus reached the Interior Ministry, however, it was too late: the closest Georgia came to holding a Pride event had already finished.

The gathering was small, but it achieved its aim. In spite of threats of violence and the police’s stated reluctance to protect them, LGBTQ Georgians and their supporters stood in a public space, in front of the nation’s most powerful government agency, holding rainbow flags. “The March of Dignity was accomplished,” Giorgi Tabagari, one of the organizers, told RFE/RL. “There will be more of us every year and we will not give up public space, which belongs to us.”

Holding a rally in front of the Interior Ministry was also a rebuke to the police that refused provide security for the LGBTQ activists, in spite of the threats against them. Georgia has a bad record of violence against LGBTQ activists, most notoriously a 2013 mob attack on a small rally downtown.

“We believe that the Interior Ministry had all the resources to protect the March of Dignity, especially given that they were notified of the plans back in February, but the governing party has not found the will to protect its LGBTQ citizens’ right of freedom of assembly,” Tbilisi Pride said in a statement.

With homosexuality being widely frowned upon in Georgia, the authorities opted not to make any politically unpopular moves, LGBTQ activists said.

Amid ongoing protests sparked by the violent crackdown on an anti-Russia demonstration on July 20, the governing Georgian Dream party is believed to be picking its battles. The LGBTQ activists saw irony in the fact that police had no scruples about using excessive force against anti-government protesters, while refusing to confront Vasadze and his open threats of violence. With the government washing its hands of the matter, the LGBTQ movement was left only with guerrilla tactics in order to make their voices heard and to challenge Vasadze and his legion of radicals.

After missing Pride, Vasadze the Knight made the trip back to downtown to crow to a crowd of supporters that he had just delivered a decisive blow to liberal ideology. “We are not a sect, we are not an assembly of maniacs and robots,” he said. “We are individuals and patriots with free will.”

Vasadze’s patriotism was questioned by a competing demonstration that was happening a block away, on the central Rustaveli Avenue. Following the June 20 police crackdown, youth and liberal-minded people have been gathering daily in front of the parliament building to demand the resignation of Interior Minister Giorgi Gakharia and to condemn what they call Russia’s occupation of part of Georgia’s territory. They accused Vasadze of trying to divert public attention away from the nation’s real problems and of peddling a pro-Moscow agenda; Vasadze’s ideas tend to dovetail with Kremlin’s take on liberalism. Police cordons kept the two demonstrations apart, but participants still had verbal and physical exchanges.

The knight eventually left with his supporters in tow, ceding the city center back to the anti-Russian occupation demonstration. From the LGBTQ activists’ perspective, holding a small but symbolic gathering in spite of the threats of violence meant that they won the day.