Georgia: Meet the New Boss, Same as the Old Boss? 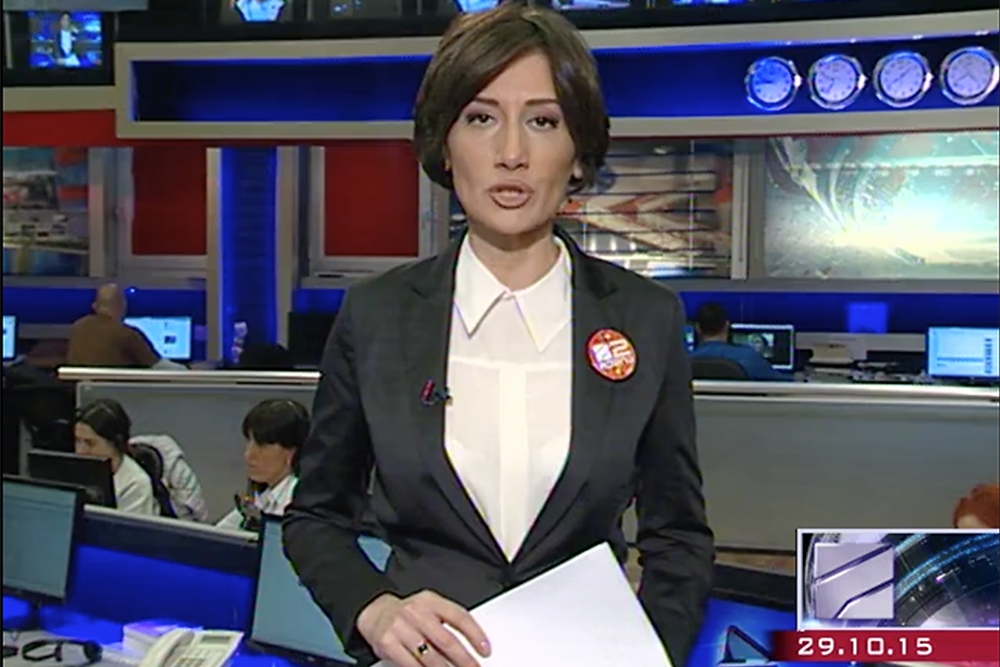 During an Oct. 29 new broadcast, Georgia’s independent Rustavi2 television news station presented its story about the growing dispute between the news channel and the ruling party of the Georgian government concerning issues of political bias and censorship. (Rustavi2 Video Screen Shot)

A couple of election cycles ago, former president Mikheil Saakashvili’s administration engendered widespread public anger over what were deemed anti-democratic actions to muzzle critics and preserve its authority. Now, with another round of parliamentary elections a year away, the incumbent Georgian Dream coalition is starting to face similar criticism amid an ownership struggle over an influential television broadcaster.

The struggle centers on an ownership dispute involving Rustavi2, Georgia’s most watched national TV station, with an estimated 28.14 percent of weekly television viewers, according to a survey conducted by TVMR, a Nielsen-affiliated polling agency.

Those numbers are significant, given that television plays a central role in any election in Georgia. Most Georgians are shown to obtain news and information via television, as opposed to radio and print media. Thus, television, especially television news, exerts considerable influence over the shaping of public opinion.

Media outlets in Georgia tend to be affiliated with a particular political entity or point of view, and the healthy competition of viewpoints helps feed a thriving culture of political pluralism – thriving at least relative to other formerly Soviet states. Georgia is among the few post-Soviet countries that has experienced a peaceful transfer of power from one political force to a competing one, namely the handover by Saakashvili’s United National Movement (UNM) to the Georgian Dream coalition following the 2012 parliamentary elections.

The timing of the dispute concerning Rustavi2 is being called into question by some analysts in Tbilisi. Rustavi2 unabashedly supports ex-President Mikheil Saakashvili’s UNM, which, according to one recent poll, now enjoys slightly more popular support than the governing Georgian Dream coalition. The station is run by a Saakashvili-era cabinet minister and deputy general prosecutor, Nika Gvaramia.

The ownership controversy dates back to August, when a former shareholder, Kibar Khalvashi, filed suit to gain a controlling interest in Rustavi2. Supporters of the station’s current leadership assert that the suit is a thinly disguised attempt to take control of the channel and, ultimately, change its editorial direction.

There are no known, direct links connecting Khalvashi to the government. And the entrepreneur says he simply is seeking to redress what he contends is an old injustice, in which Saakashvili administration officials allegedly forced him to accept a buyout and surrender his ownership interests in Rustavi2.

In this clan-focused society, however, the membership of Khalvashi’s sister, Pati, in the ruling Georgian Dream coalition, is under scrutiny, and fosters suspicion about possible political motivations. A court-imposed freeze on Rustavi2’s assets, deemed “excessive” by the Organization for Security and Cooperation in Europe, has cemented the impression that the government is trying to use a backdoor method to gain control of the station.

Billionaire former prime minister Bidzina Ivanishvili – founder of the ruling Georgian Dream coalition, and a man who is still widely believed to be pulling the political strings from behind the scenes – has termed Rustavi2 “a machine of lies” that must be stopped.

Both local and international rights watchdogs have expressed alarm about the conduct of the case and its implications for media diversity.

More recent developments have added to those fears. The National Security Council this week installed security cameras on the premises of Rustavi2 amid an investigation into media allegations of a coup conspiracy by Saakashvili and a senior UNM member, Giga Bokeria.

If this sounds familiar, it should, Georgian media observers say.

In 2007, the Saakashvili government, at a time when it was grappling to contain mass protests, claimed an attempted coup d’état and seized control of Imedi TV, a pro-opposition, private broadcaster. The station’s owners and key journalists were removed or left, and Imedi soon joined other large news channels in extolling the government’s accomplishments.

“We are back to square one, with the government trying to leave the opposition without an outlet to voice criticism,” commented Nino Danelia, a professor of communications at Tbilisi-based Ilia State University and a member of the Media Advocacy Coalition, a non-profit group.

Following the UNM’s fall from power in 2012, Georgia’s international rankings for media freedom improved. Yet Danelia and others question how deep the improvement has been. Danelia believes that the Georgian Dream began an offensive against critical news media in 2013, less than a year after coming to power, with public television’s dismissal of two popular, Saakashvili-sympathetic talk show hosts, Davit Paichadze and Eka Kvesitadze.

Almost 20 staffers resigned with her to protest Maestro’s alleged, never-realized plans to give a government advisor his own show.

In August, Imedi, now pro-government, canceled one of its most popular, and financially profitable, programs, the political talk show “Reaction,” after its co-host, Inga Grigolia, claimed that the government was attempting to influence the content of the show’s programming.

In October, watchdog group Transparency International cited 15 other cases that illustrated pressure on regional media “from both local and central authorities.”

Prime Minister Irakli Gharibashvili, who has termed critical journalists the “blind weapons” of politicians, and Ivanishvili, whose wife ran a pro-government TV company during his own time in office, have heatedly denied accusations that they have an interest in the outcome of the Rustavi2 suit.

“Not a single intelligent person,” fumed Gharibashvili at an October 28 cabinet meeting, will see “a rational reason” why “our democratic government” would want to be involved in Rustavi2’s court case.

After the October 17 release of an opinion poll that showed the Georgian Dream slightly lagging behind the UNM in Georgia’s 2016 parliamentary race, another such video emerged online. It was screened publicly by government supporters, and UNM offices were attacked. As yet, “no or very little legal action” has been taken against participants, according to Transparency International.

Gharibashvili has denied any government involvement in the video’s release. He has, however, asserted that the UNM deserves to be sexually abused like the filmed prisoner. In addition, he has accused the pollsters of working for the opposition party, a charge the government also leveled at participants in TVMR surveys that placed the pro-UNM Rustavi2 in the lead among TV viewers.

The Georgian Dream coalition came to power in the last elections with a pledge to end politically motivated smear tactics and other forms of media manipulation. Many observers in Tbilisi will be judging the pending Rustavi2 verdict as a gauge of whether the Georgian Dream is making good on that promise.